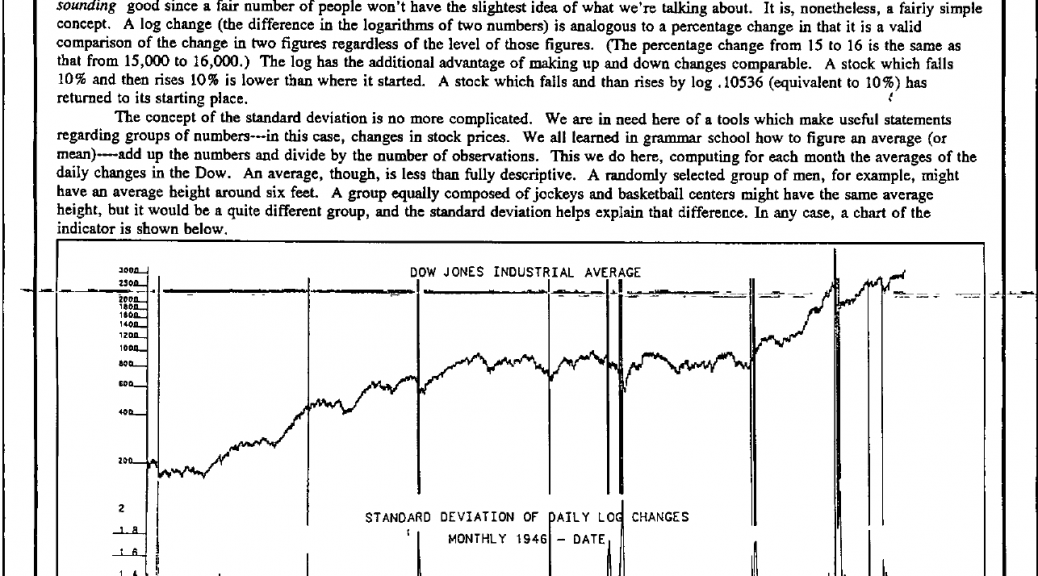 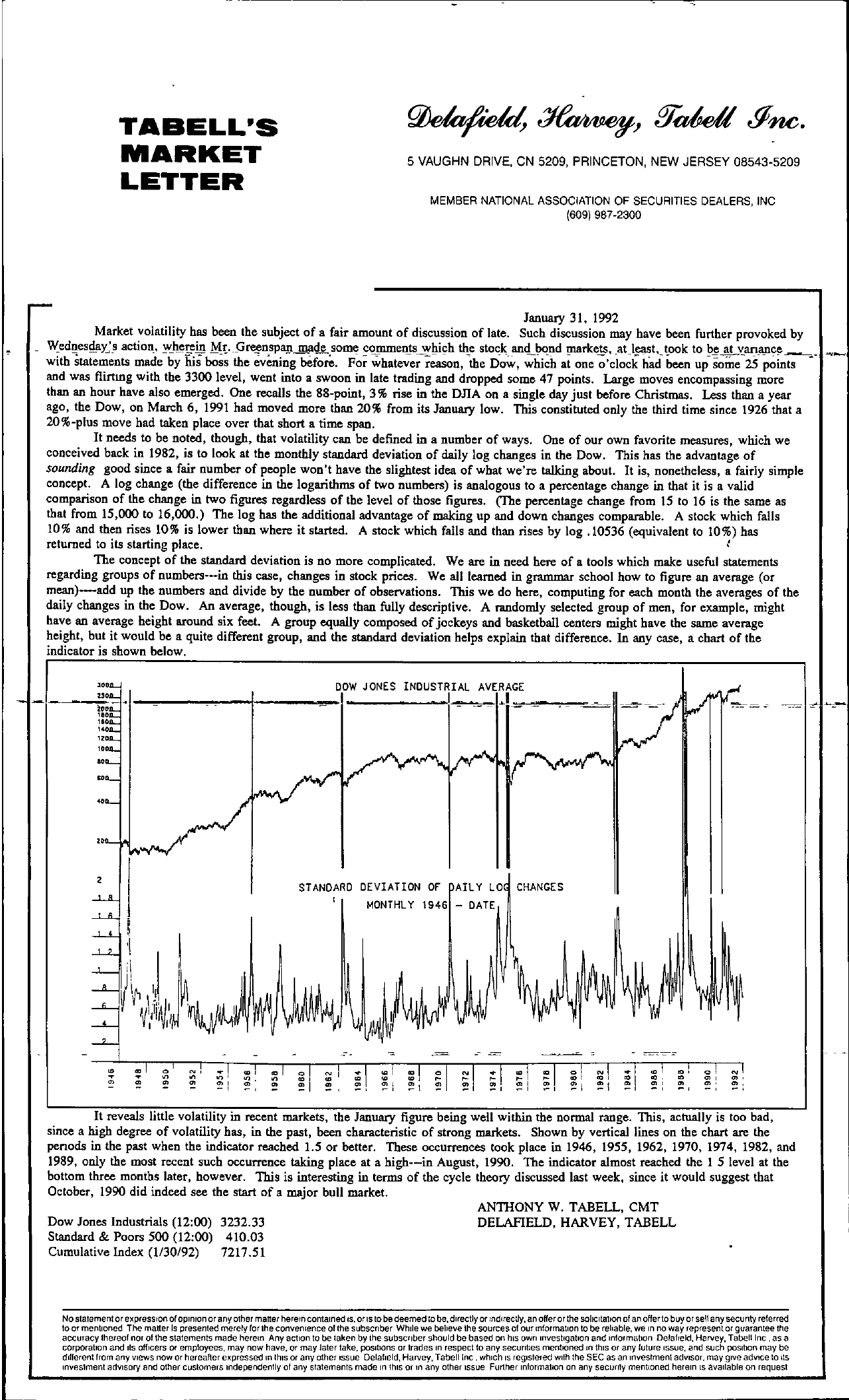 TABELL'S MARKET LETTER 5 VAUGHN DRIVE, CN 5209, PRINCETON, NEW JERSEY 08543-5209 MEMBER NATIONAL ASSOCIATION OF SECURITIES DEALERS, INC (609) 987-2300 January 31, 1992 Market volatility has been the subject of a fair amount of discussion of late. Such discussion may have been further provoked by Wednesdays action, wherein Mr. Greenspan made some comments which the stock and bond markets. At least, took to be at variance with statements made by his boss the evening before. whatever reason be the Dow, at one o'clock had been up some 25 points – and was flirting with the 3300 level, went into a swoon in late trading and dropped some 47 points. Large moves encompassing more than an hour have also emerged. One recalls the 88-point, 3 rise in the DJIA on a single day just before Christmas. Less than a year ago, the Dow, on March 6, 1991 had moved more than 20 from its January low. This constituted only the third time since 1926 that a 20-plus move had taken place over that short a time span. n needs to be noted, though, that volatility can be defined in a number of ways. One of our own favorite measures, which we conceived back in 1982, is to look at the monthly standard deviation of daily log changes in the Dow. This has the advantage of sounding good since a fair number of people won't have the slightest idea of what we're talking about. It is, nonetheless, a fairly simple concept. A log change (the difference in the logarithms of two numbers) is analogous to a percentage change in that it is a valid comparison of the change in two figures regardless of the level of those figures. ('The percentage change from 15 to 16 is the same as that from 15,000 to 16,000.) The log has the additional advantage of making up and down changes comparable. A stock which falls 10 and then rises 10 is lower than where it started. A stock which falls and than rises by log ,\0536 (equivalent to 10) has returned to its starting place. I The concept of the standard deviation is no more complicated. We are in need here of a tools which make useful statements regarding groups of numbers–in this case, changes in stock prices. We all learned in grammar school how to figure an average (or mean)–add up the numbers and divide by the number of observations. This we do here, computing for each month the averages of the daily changes in the Dow. An average, though, is less than fully descriptive, A randomly selected group of men, for example, might have an average height around six feet. A group equally composed of jockeys and basketball centers might have the same average height, but it would be a quite different group, and the standard deviation helps explain that difference. In any case, a chart of the indicator is shown below. DOW JONES INOUSTRIAL AVERAGE I I-,……..-. vJ rV!'J,JI '\ I 'I Jill 0 N, STANOARD DEVIATION OF AIL Y LO CHANGES MONTHL Y 1946 – DATE , – . —- It reveals little volatility in recent markets, the January figure being well within the normal range. This, actually is too bad, since a high degree of volatility has, in the past, been characteristic of strong markets. Shown by vertical lines on the chart are the penods in the past when the indicator reached 1.5 or better. These occurrences took place in 1946, 1955, 1962, 1970, 1974, 1982, and 1989, only the most recent such occurrence taking place at a high–in August, 1990. The indicator almost reached the 1 5 level at the bottom three months later, however. This is interesting in terms of the cycle theory discussed last week, since it would suggest that October, 1990 did indeed see the start of a major bull market. ANTIiONYW. TABELL, CMT Dow Jones Industrials (1200) 3232.33 DELAAELD,HARVEY,TABELL Standard & Poors 500 (1200) 4\0.03 Cumulative Index (1130/92) 7217.51 No statement or expression of opinion or any other matter herein contained is, or is to be deemed to be, directly or indirectly, an offer or the solicitation of an offer to buy or sell any security referred to or mentioned. The matter is presented merely for the convenience of the subscriber. While we believe the sources of our information to be reliable, we in no way represent or guarantee the accuracy thereof nor of the statements made herein. Any action to be taken by the subscriber should be based on his own investigation and information. Delafield, Harvey, Tabell Inc. as a corporation and its officers or employees, may now have, or may later take, positions or trades in respect to any securities mentioned in this or any future issue, and such position may be different from any views now or hereafter expressed in this or any other issue. Delafield, Harvey, Tabell Inc., which is registered with the SEC as an investment advisor, may give advice to its investment advisory and other customers independently of any statements made in this or in any other issue. Further information on any security mentioned herein is available on request.