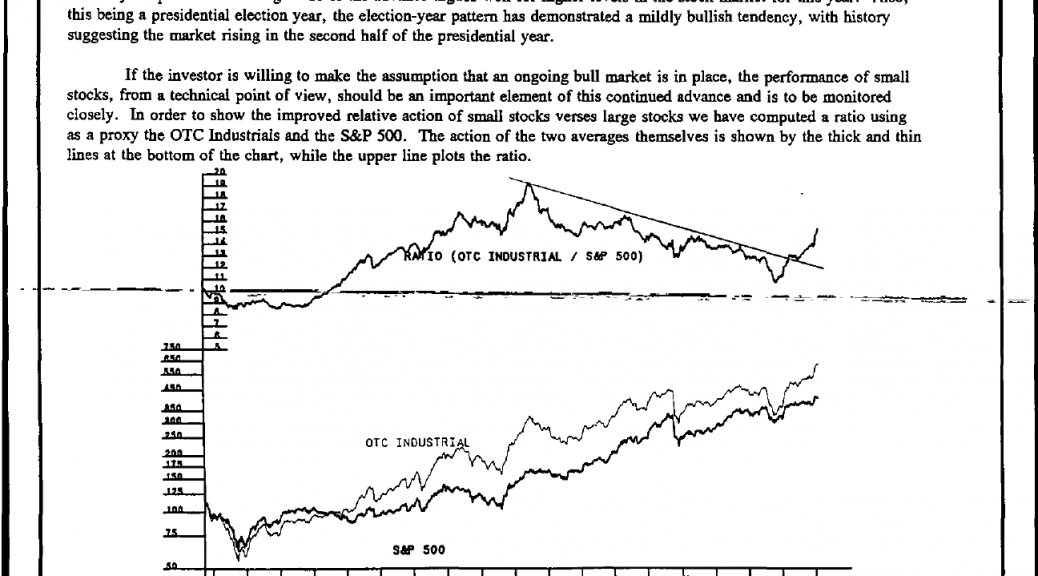 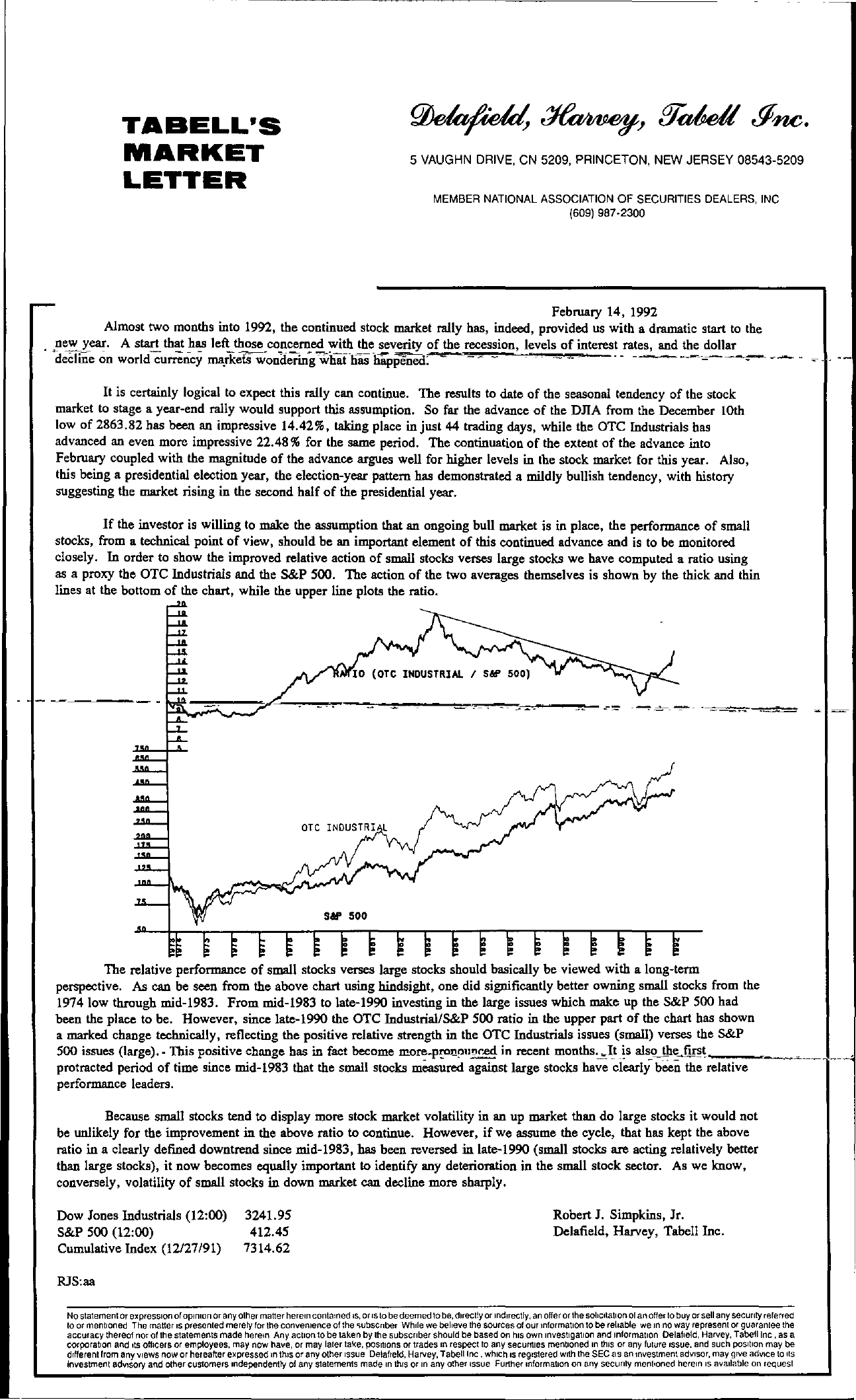 TABELL'S MARKET LETTER 5 VAUGHN DRIVE, CN 5209, PRINCETON, NEW JERSEY 08543-5209 MEMBER NATIONAL ASSOCIATION OF SECURITIES DEALERS, INC (609) 987-2300 February 14, 1992 Almost two months into 1992, the continued stock market rally has, indeed, provided us with a dramatic start to the . new year. A start that has left those concerned with the severity of the recession, levels of interest rates, and the dollar decline on world currency markets wondering what has happened. It is certainly logical to expect this rally can continue. The results to date of the seasonal tendency of the stock market to stage a year-end rally would support this assumption. So far the advance of the DJIA from the December 10th low of 2863.82 has been an impressive 14.42, taking place in just 44 trading days, while the OTC lodustrials bas advanced an even more impressive 22.48 for the same period. The continuation of the extent of the advance into February coupled with the magnitude of the advance argues well for higher levels in the stock market for this year. Also, this being a presidential election year, the election-year pattern has demonstrated a mildly bullish tendency, with history suggesting tbe market rising in the second half of the presidential year. If the investor is willing to make the assumption that an ongoing bull market is in place, the performance of small stocks, from a technical point of view, should he an important element of this continued advance and is to be monitored closely. In order to show the improved relative action of small stocks verses large stocks we bave computed a ratio using as a proxy the OTC lodustrials and the S&P 500. The action of the two averages themselves is shown by tbe thick and thin lines at the bottom of the chart, while the upper line plots the ratio. The relative performance of small stocks verses large stocks should basically he viewed with a long-term perspective. As can be seen from the above chart using hindsight, one did significantly better owning small stocks from tbe 1974 low through mid-1983. From mid-1983 to late-1990 investing in the large issues which make up the S&P 500 bad been the place to be. However, since late-1990 the OTC IndustriallS&P 500 ratio in the upper part of the chart bas sbown a marked change technically, reflecting the positive relative strength in the OTC lodustrials issues (small) verses the S&P 500 issues (large). – This positive change has in fact become 1I!.0rep!,,l)ur.ed in recent months.1t is alsolhe…fullt—- —protracted period of time since mid-1983 thst the small stocks measured agalnst large stocks ha-;; -ciwly beeii the relative performance leaders. Because small stocks tend to display more stock market volatility in an up market than do large stocks it would not be unlikely for the improvement in the above ratio to continue. However, if we assume the cycle, that has kept the above ratio in a clearly defined downtrend since mid-1983, has been reversed in late-1990 (small stocks are acting relatively better than large stocks), it now becomes equally important to identify any deterioration in the small stock sector. As we know, conversely, volatility of small stocks in down market can decline more sharply. Dow Jones Industrials (1200) 3241.95 S&P 500 (1200) 412.45 Cumulative lodex (12/27/91) 7314.62 Robert J. Simpkins, Jr. Delafield, Harvey, Tabellloc. RJSaa No statement or expression of opinion or any other matter herein contained is, or is to be deemed to be, directly or indirectly, an offer or the solicitation of an offer to buy or sell any security referred to or mentioned. The matter is presented merely for the convenience of the subscriber. While we believe the sources of our information to be reliable, we in no way represent or guarantee the accuracy thereof nor of the statements made herein. Any action to be taken by the subscriber should be based on his own investigation and information. Delafield, Harvey, Tabell Inc. as a corporation and its officers or employees, may now have, or may later take, positions or trades in respect to any securities mentioned in this or any future issue, and such position may be different from any views now or hereafter expressed in this or any other issue. Delafield, Harvey, Tabell Inc., which is registered with the SEC as an investment advisor, may give advice to its investment advisory and other customers independently of any statements made in this or in any other issue. Further information on any security mentioned herein is available on request.