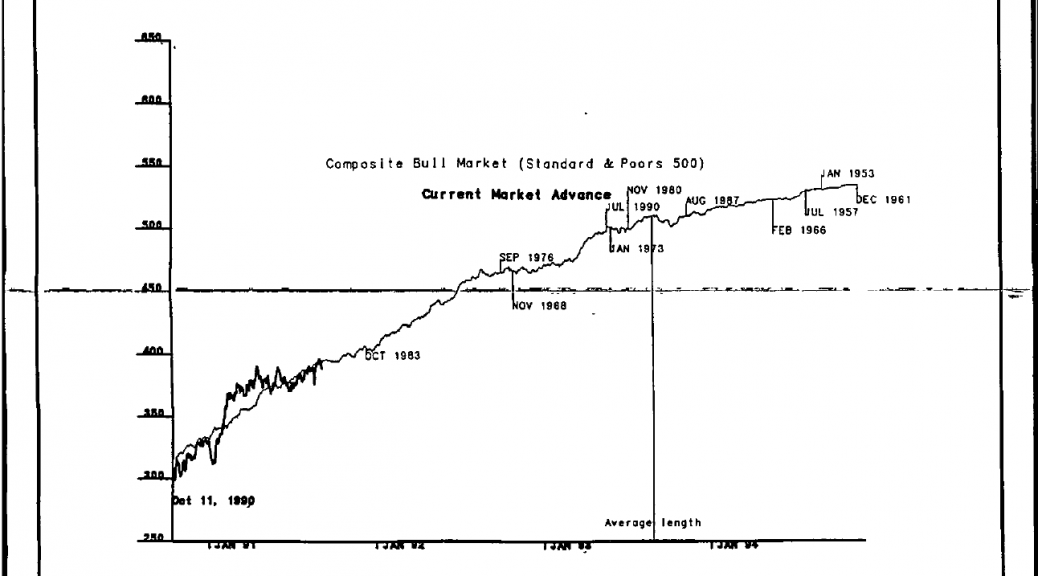 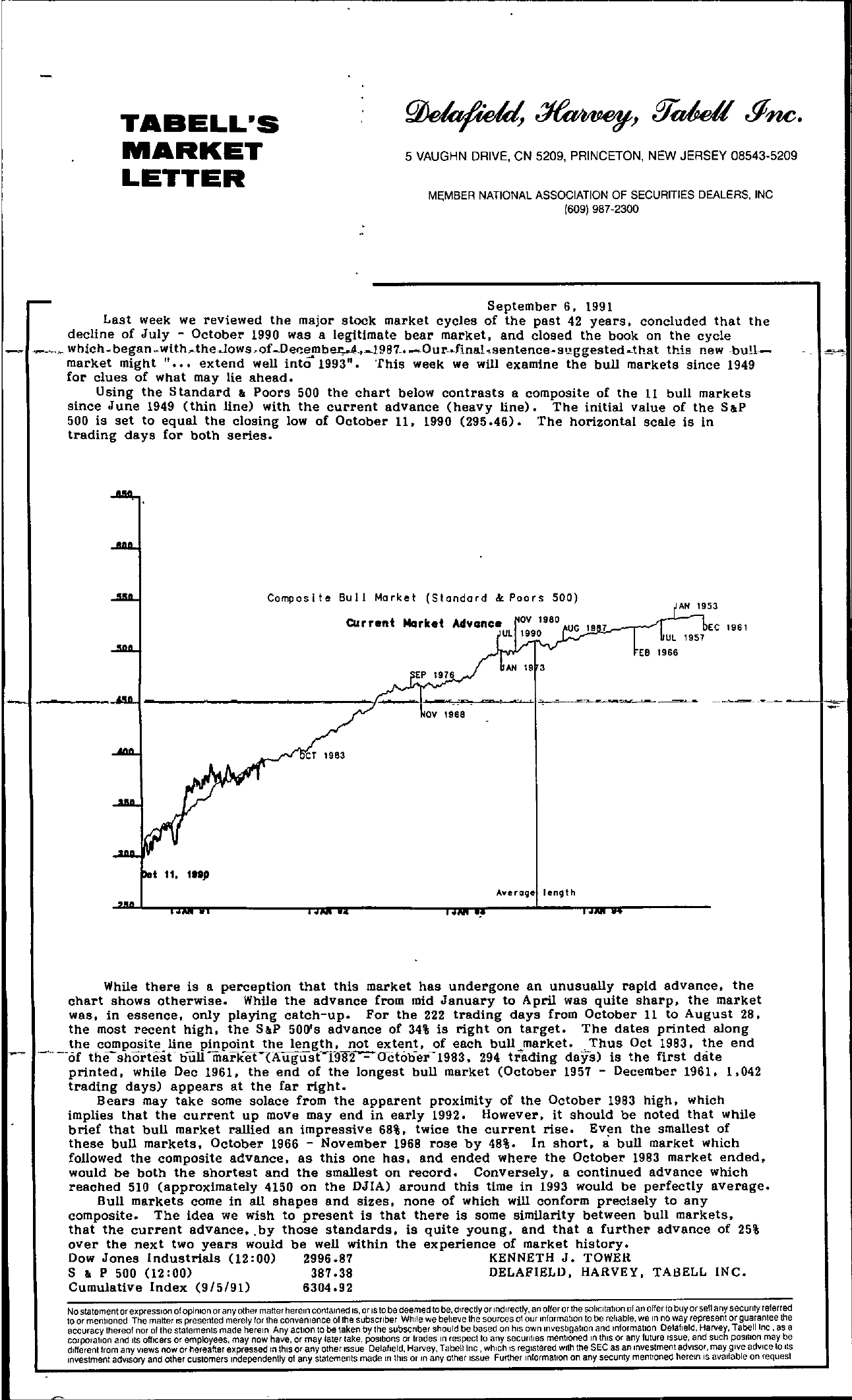 TABELL'S MARKET LETTER 5 VAUGHN DRIVE, CN 5209, PRINCETON, NEW JERSEY 08543-5209 MMBER NATIONAL ASSOCIATION OF SECURITIES DEALERS, INC (609) 987-2300 September 6. 1991 Last week we reviewed the major stock market cycles of the past 42 years. concluded that the decline of July – October 1990 was a legitimate bear market. and closed the book on the cycle which-beganwith-thelows,ofDe,,mbeJ;..4.1987.0urfinal,sentence.s\!ggestedthat this new -bu!l- market might extend well into 1993. This week we will examine the bull markets since 1949 for clues of what may lie ahead. Using the Standard Poors 500 the chart below contrasts a composite of the 11 bull markets since June 1949 (thin Une) with the current advance (heavy line). The initial value of the Sa.P 500 is set to equal the closing low of October 11. 1990 (295.46). The horizontal scale is in trading days for both series. ,.,.. Composite Bull Market (Standard & Poers 500) CUrrent Market 19 3 1968 1961 — t 11. 19 Average length While there Is a perception that this market has undergone an unusually rapid advance. the chart shows otherwise. While the advance from mid January to April was quite sharp. the market was. in essence. only playing catch-up. For the 222 trading days from October 11 to August 28. the most recent high. the S&P 500's advance of 34 is right on target. The dates printed along the composite line pinpoint the length. not extent. of each bull market. Thus Oct 1983. the end —of theshoi'test bull market-(Augusf'I982 – O-Ctob-er-1983. 294 trading days) is the first date printed. while Dec 1961. the end of the longest bull market (October 1957 – December 1961. 1.042 trading days) appears at the far right. Bears may take some solace from the apparent proximity of the October 1983 high. which implies that the current up moVe may end in early 1992. However. it should be noted that While brief that bull market rallied an impressive 68. twice the current rise. Evn the smallest of these bull markets. October 1966 – November 1968 rose by 48. In short. a bull market which followed the composite advance. as this one has. and ended where the October 1983 market ended. would be both the shortest and the smallest on record. Conversely. a continued advance which reached 510 (approximately 4150 on the DJIA) around this time in 1993 would be perfectly average. Bull markets come in all shapes and sizes. none of which will conform precisely to any composite. The idea we wish to present is that there is some similarity between bull markets. that the current advance . by those standards. is quite young. and that a further advance of 25 oVer the next two years would be well within the experience of market history. Dow Jones Industrials (12 00) 2996.87 KENNETH J. TOWER S II P 500 (1200) 387.38 DELAFIELD. HARVEY. TABELL INC. Cumulative Index (9/5/91) 6304.92 No statement orexpresslon of opinion or any other matter herein contained IS, or IS to be deemed to be, directly or indirectly, an offer or the solicitation of an offer to buy or sell any security referred to or menMned The mailer IS presented merely for the convenience of the subscriber While we believe the sources 01 our Information to be reliable, we In no way represent or guarantee the accuracy thereof nor of the statements made herein Any action to be taken by the subscriber should be based on hiS own InvestlgallOn and mformaMn Detafleld, Harvey, Tabelltnc ,as a corporallOn and Its officers or employees, may now have, or may later take, posItions or trades In respect to any seCUrities mentioned m thiS or any future Issue, and such posllIOn may be different from any views now or hereafter expressed In Ihlsor any other Issue Delafield, Harvey, Tabelllnc, which IS registered With the SEC as an mvestmentadvlsor, may give advice to Its Investment advISOry and other customers Independently of any statements made In thiS or In any other Issue Further Information on any secunty menllOned herein IS available on request