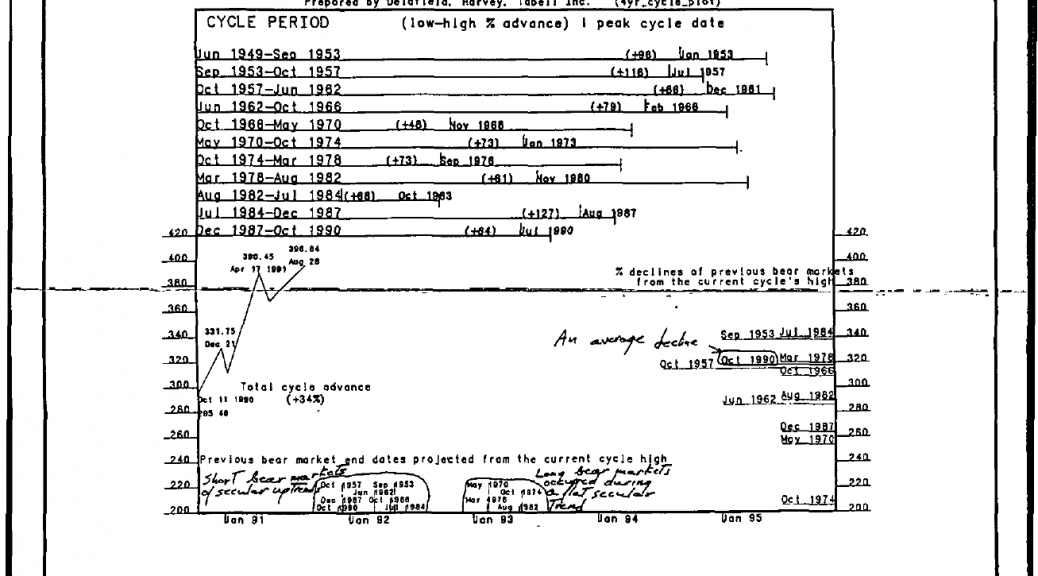 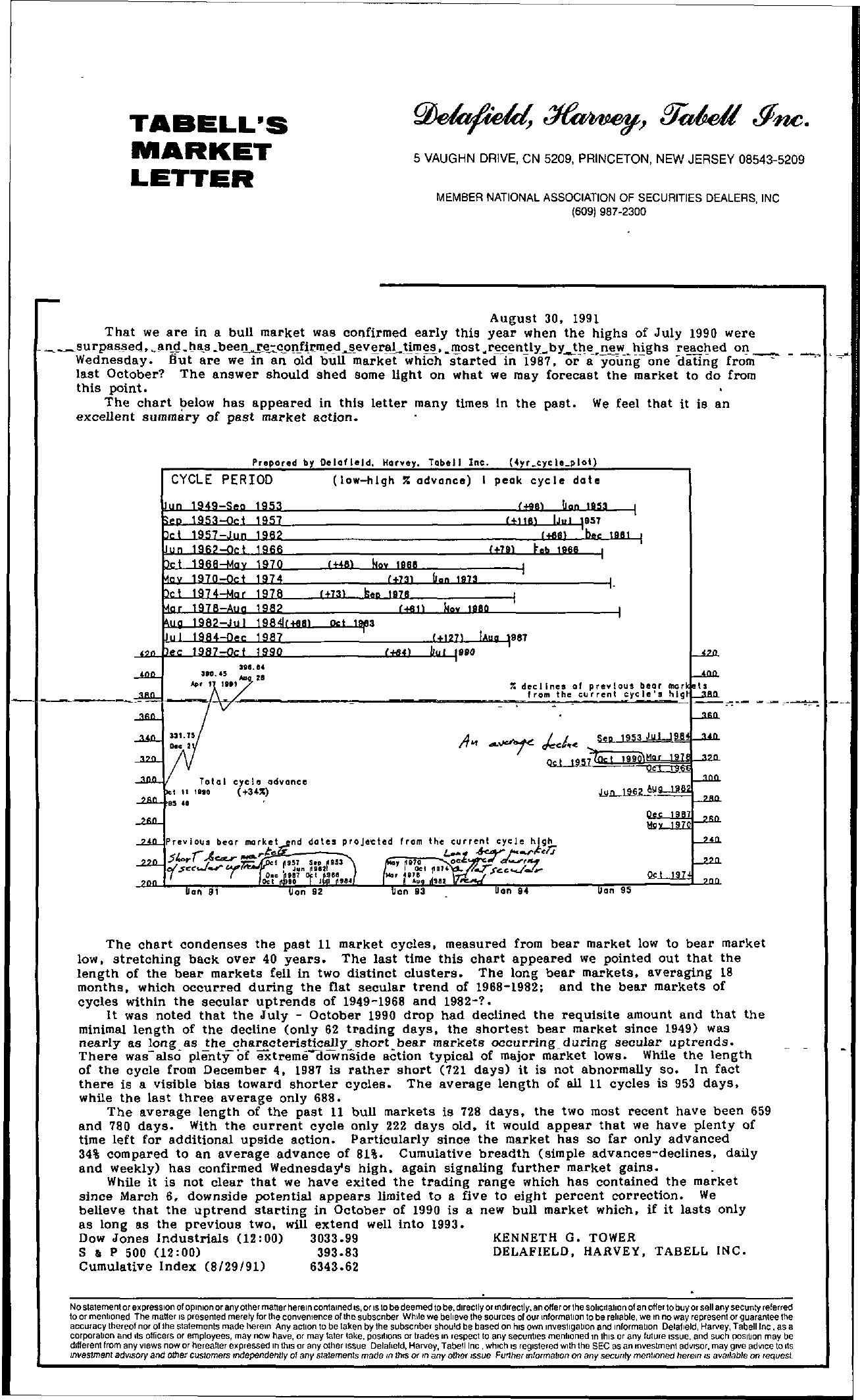 TABELL'S MARKET LETTER 5 VAUGHN DRIVE, CN 5209, PRINCETON, NEW JERSEY 08543-5209 MEMBER NATIONAL ASSOCIATION OF SECURITIES DEALERS, INC (609) 987-2300 August 30. 1991 That we are in a bull market was confirmed early this year when the highs of July 1990 were surpa&ect, …!lnJ!.ttl!s .beeJ1….!J.cO!lJmed.L-evr!11—ool!Jes. I!!ost .. rn!ly… bYh.l)ighs l)ed 01 Wednesday. But are we in an old bull market which started in 1987. or a young one dating from last October The answer should shed some light on what we may forecast the market to do from this pOint. The chart below has appeared in this letter many times In the past. We feel that it is an excellent summary of past market action. Prepared b Delafield. Harvey. TobeJl Inc. (4yrcychplot) CYCLE PERIOD (Iow-hlgh advanco) I peak cycle date cycle advance ( 34X) 1. declines of previous bear lIIor from the current cycle's hlg A d- rkc!,, Sep 1953 Jyl Qti.JJ!I an 91 an 94 an 95 The chart condenses the past 11 market cycles. measured from bear market low to bear market low. stretching back over 40 years. The last time this chart appeared we pointed out that the length of the bear markets fell in two distinct clusters. The long bear markets. averaging 18 months. which occurred during the flat secular trend of 1968-1982; and the bear markets of cycles within the secular uptrends of 1949-1968 and 1982- It was noted that the July – October 1990 drop had declined the requisite amount and that the minimal length of the decline (only 62 trading days. the shortest bear market since 1949) was ofnearly as long as the characteristically short bear markets occurring during secular uptrend There was-also plenty extremeaownside action typical of major market lows. While the length of the cycle from December 4. 1987 is rather short (721 days) it is not abnormally so. In fact there is a visible bias toward shorter cycles. The average length of all 11 cycles is 953 days. while the last three average only 688. The average length of the past 11 bull markets is 728 days. the two most recent have been 659 and 780 days. With the current cycle only 222 days old. it would appear that we have plenty of time left for additional upside action. Particularly since the market has so far only advanced 34 compared to an average advance of 81. Cumulative breadth (simple advances-declines. daily and weekly) has confirmed Wednesday's high. again signaling further market gains. While it is not clear that we have exited the trading range which has contained the market since March 6. downside potential appears limited to a five to eight percent correction. We believe that the uptrend starting in October of 1990 is a new bull market which. if it lasts only as long as the previous two. will extend well into 1993. Dow Jones Industrials (12 00) 3033.99 KENNETH G. TOWER S & P 500 (1200) 393.83 DELAFIELD. HARVEY. TAB ELL INC. Cumulative Index (8/29/91) 6343.62 No statement or expresSion of opinion or any other matter herein comalned IS, or IS 10 be deemed to be, dlrecUy or Indirectly, an offer or Ihe solicitation of an offer to buy or sell any secunty referred to or menllOned The matter IS presented merely for the convenience of Ihe subscnber While we beheve Ihe sources of our Informallon to be rehable, we In no way represent or guarantee the accuracy thereof nor ollhe statements made herein Any action to be laken by the subscriber should be based on hiS own investigation and Information Delafield, Harvey, Tabell Inc. as a corporation and Its officers or employees, may now have, or may laler lake, posrtlons or trades In respect to any secuntles mentioned In thiS or any future Issue, and such posillon may be different from any views now Of hereafter expressed In thiS or any olher Issue Delafield, Harvey, Tabe!llnc , whICh IS reglslered Wlth the SEC as an Investmenl adVISor, may give adVice to 115 Investment adVISOry and other customers Independently of any statements made In ItNs or many OUtef ISSue Further Information on any secUrity mentIOned herem IS available on requesl