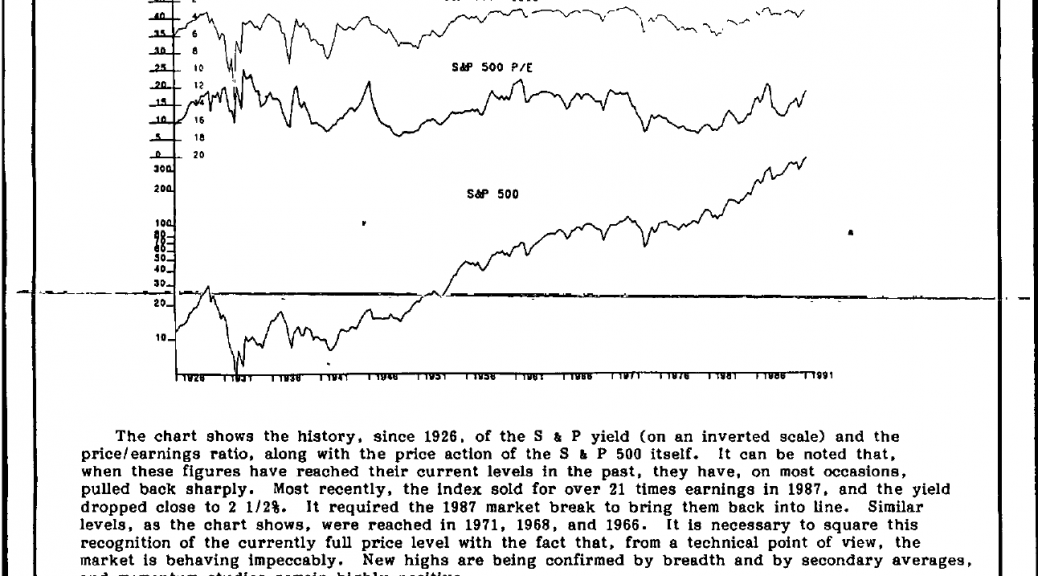 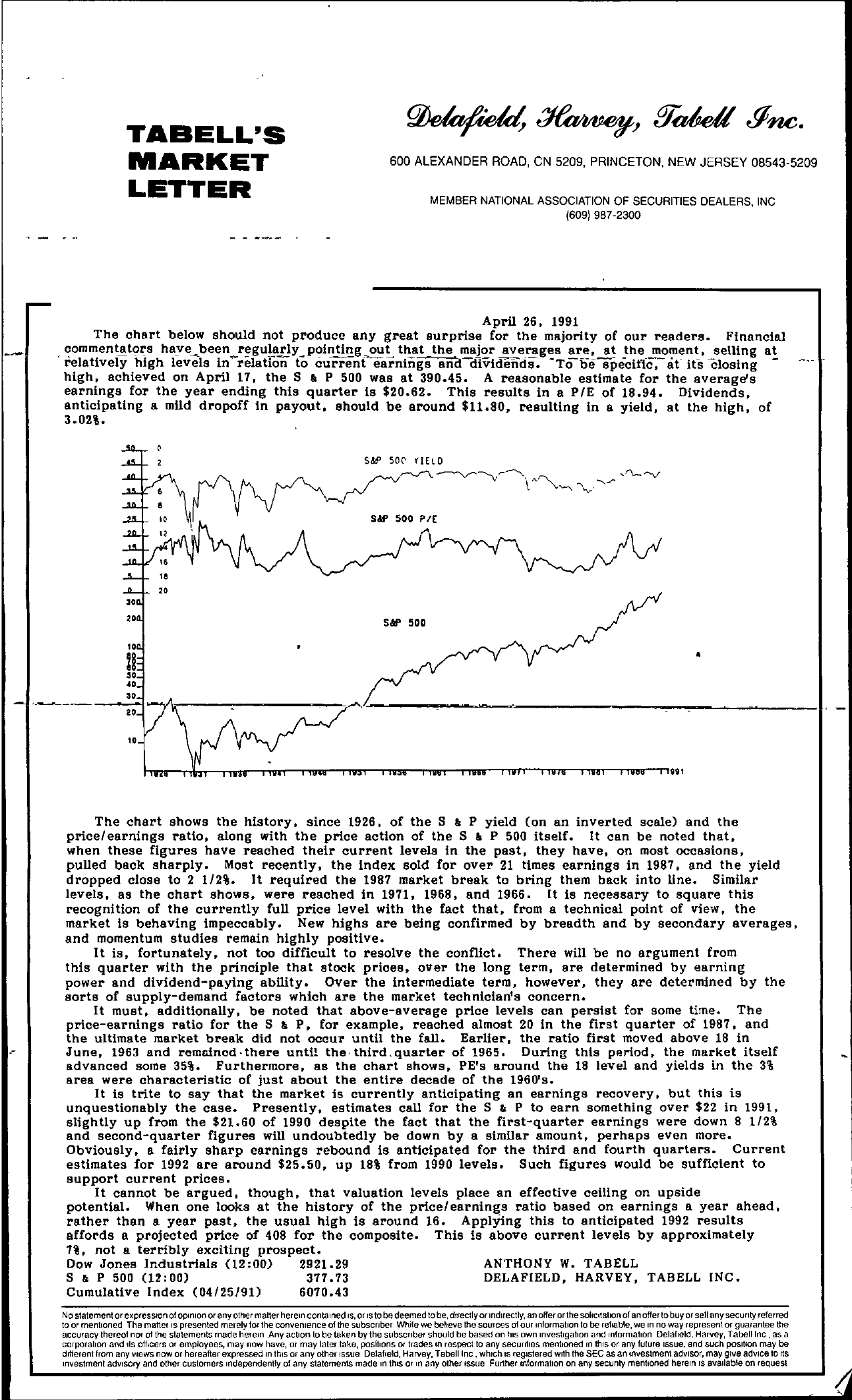 TABELL'S MARKET LETTER 600 ALEXANDER ROAD, CN 5209, PRINCETON, NEW JERSEY 08543-5209 MEMBER NATIONAL ASSOCIATION OF SECURITIES DEALERS, INC (6091 987-2300 April 26, 1991 The chart below should not produce any great aurprlse for the majority of our readers. Financial commenttors havebeen regularly pointing out that the major averages are, at the moment, selling at at'relatively high levels in-relation to currenfearniiigs and-dIVidends. -TobespeciflC;- its closing high, achieved on April 17, the S P 500 was at 390.45. A reasonable estimate for the average's earnings for the year ending this quarter is 20.62. This results in a PIE of 18.94. Dividends. anticipating a mUd dropoff in payout, should be around 11.80, resulting in a yield, at the high, of 3.02. 20 S&P 500 – ',– ——-I-'7'\——–, The chart shows the history, since 1926, of the S P yield (on an inverted scale) and the price/earnings ratio, along with the price action of the S P 500 itself. It can be noted that, when these figures have reached their current levels in the past, they have, on most occasions, pulled back sharply. Most recently, the Index sold for over 21 times earnings in 1987, and the yield dropped close to 2 112. It required the 1987 market break to bring them back into line. Similar levels, as the chart shows, were reached In 1971, 1968, and 1966. It Is necessary to square this recognition of the currently full price level with the fact that, from a technical point of view, the market Is behaving impeccably. New highs are being confirmed by breadth and by secondary averages, and momentum stUdies remain highly positive. It is, fortunately, not too difficult to resolve the conflict. There will be no argument from this quarter with the principle that stock prices, over the long term, are determined by earning power and dividend-paying abillty. Over the Intermediate term, however, they are determined by the sorts of supply-demand factors which are the market technician's concern. It must, additionally, be noted that above-average price levels can persist for some time. The price-earnings ratio for the S P, for example, reached almost 20 in the first quarter of 1987, and the ultimste market break did not occur until the fall. Earlier, the ratio first moved above 18 in June, 1963 and remcincd -there until the, third. quarter of 1965. During this period, the market itself advanced some 35. Furthermore, as the chart shows, PE's around the 18 level and yields in the 3 area were characteristic of just about the entire decade of the 1960's. It is trite to say that the market is currently anticipating an earnings recovery, but this is unquestionably the case. Presently, estimates call for the S & P to earn something over 22 in 1991, slightly up from the 21.60 of 1990 despite the fact that the first-quarter earnings were down 8 112 and second-quarter figures will undoubtedly be down by a similar amount, perhaps even more. Obviously, a fairly sharp earnings rebound is anticipated for the third and fourth quarters. Current estimates for 1992 are around 25.50, up 18 from 1990 levels. Such figures would be sufficient to support current prices. It cannot be argued, though, that valuation levels place an effective ceiling on upside potential. When one looks at the history of the price/earnings ratio based on earnings a year ahead, rather than a year past, the usual high is around 16. ApplYing this to anticipated 1992 results affords a projected price of 408 for the composite. This is above current levels by approximately 7, not a terribly exciting prospect. Dow Jones Industrials 02 00) 2921.29 ANTHONY W. TABELL S P 500 02 00) 377.73 DELAFIELD, HARVEY, TABELL INC. Cumulative Index (04/25/9il 6070.43 No statement or expressIon of opinion or any other matter herem contained IS, or IS to be deemed to be, directly or Indirectly, an oHer or the sohcltallon of an offer to buy or sell any secUrity referred to or mentioned The maner IS presented merely for the convenience of the subscriber While we beheve the sources of our information to be rehable, we In no way represent Of guarantee the accuracy thereof nor of the statements made herein Any action to be taken by the subSCriber should be based on hiS own Investigation and Information Delafield, Harvey, Tabelllnc, as a corporallon and lis officers or employees, may now have, or may later take, poslons or trades In respect to any securrtles mentioned In thiS or any future Issue, and such poSitIOn may be different from any views now or hereafter expressed In thiS or any other Issue Delafield, Harvey, Tabelllnc, which IS registered wrth the SEC as an Investment adVISor, may give adVice to rts Investment adviSOry and other customers Independently of any statements made In thIS or In any other Issue Further Information on any secUrity mentioned herein IS available on request