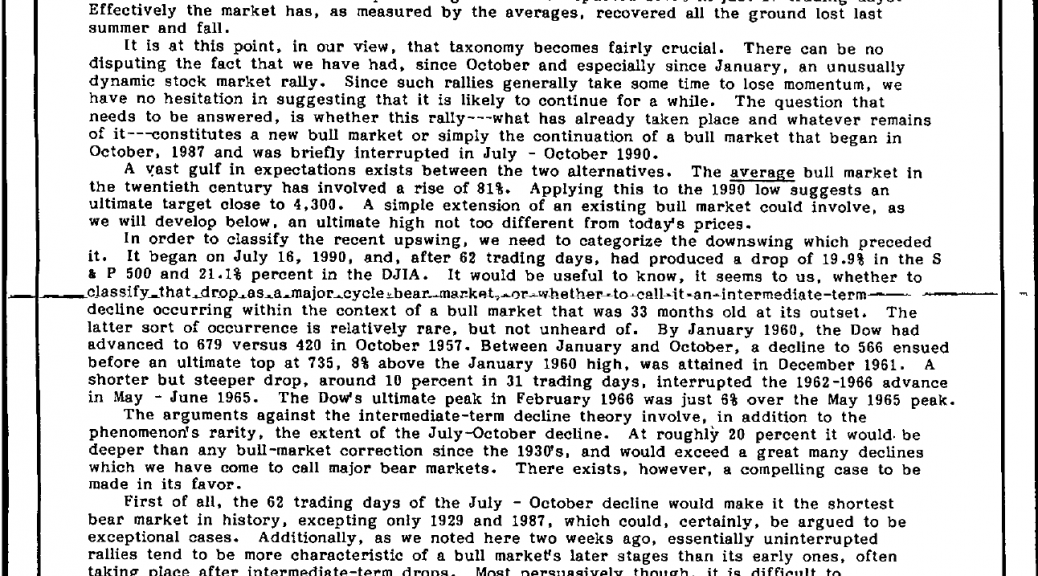 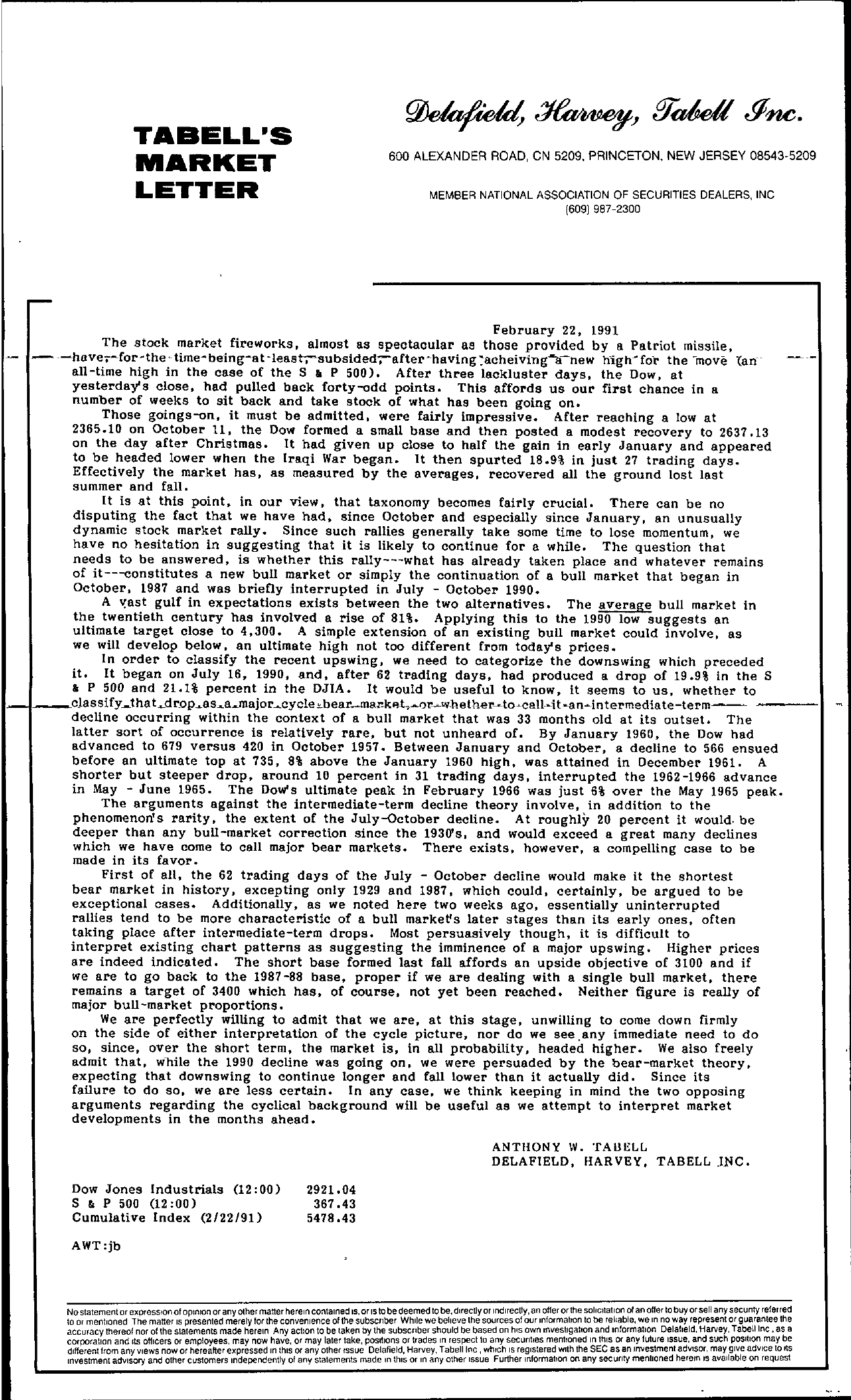 TABELL'S MARKET LETTER 600 ALEXANDER ROAD, CN 5209. PRINCETON. NEW JERSEY 08543-5209 MEMBER NATIONAL ASSOCIATION OF SECURITIES DEALERS, INC 1609) 987-2300 February 22, 1991 The stock market fireworks, almost as spectacular as those provided by a Patriot missile, – -have.-for-the time'being-at -least.subsided-,-after-havingacheiving'Cnew high- for the -move (an all-time high in the case of the S P 500). After three lackluster days, the Dow, at yesterday's close, had pulled back forty-odd points. This affords us our first chance in a number of weeks to sit back and take stock of what has been going on. Those goings-on, it must be admitted, were fairly impressive. After reaching a low at 2365.10 on October 11, the Dow formed a small base and then posted a modest recovery to 2637.13 on the day after Christmas. It had given up close to half the gain in early January and appeared to be headed lower when the Iraqi War began. It then spurted 18.9 in just 27 trading days. Effectively the market has, as measured by the averages, recovered all the ground lost last summer and fall. It is at this point, in our view, that taxonomy becomes fairly crucial. There can be no disputing the fact that we have had, since October and especially since January, an unusually dynamic stock market rally. Since such rallies generally take some time to lose momentum, we have no hesitation in suggesting that it is likely to continue for a while. The question that needs to be answered, is whether this rally—what has already taken place and whatever remains of it—constitutes a new bull market or simply the continuation of a bull market that began in October, 1987 and was briefly Interrupted in July – October 1990. A -rast gulf in expectations exists between the two alternatives. The average bull market in the twentieth century has involved a rise of 81. Applying this to the 1990 low suggests an ultimate target close to 4,300. A simple extension of an existing bull market could involve, as we will develop below, an ultimate high not too different from today's prices. In order to classify the recent upswing, we need to categorize the downswing which preceded it. It began on July 16, 1990, and, after 62 trading days, had produced a drop of 19.9 in the S P 500 and 21.1 percent in the DJIA. It would be useful to know, it seems to us, whether to 1 classifythatdropasamajorcyclebear-makp.t,or'etertoLcall-itan-intermediate-term– – – – – decline occurring within the context of a bull market that was 33 months old at its outset. The latter sort of occurrence is relatively rare, but not unheard of. By January 1960, the Dow had advanced to 679 versus 420 in October 1957. Between January and October, a decline to 566 ensued before an ultimate top at 735, 8 above the January 1960 high, was attained in December 1961. A shorter but steeper drop, around 10 percent in 31 trading days, interrupted the 1962-1966 advance in May – June 1965. The Dow's ultimate peak in February 1966 was just 6 over the May 1965 peak. The arguments against the intermediate-term decline theory involve, in addition to the phenomenon's rarity, the extent of the July-october decline. At roughly 20 percent it would. be deeper than any bull-market correction since the 1930's, and would exceed a great many declines which we have come to call major bear markets. There exists, however, a compelling case to be made in its favor. First of all, the 62 trading days of the July – October decline would make it the shortest bear market in history, excepting only 1929 and 1987, which could, certainly, be argued to be exceptional cases. Additionally, as we noted here two weeks ago, essentially uninterrupted rallies tend to be more characteristic of a bull markes later stages than its early ones, often taking place after intermediate-term drops. Most persuasively though, it is difficult to interpret existing chart patterns as suggesting the imminence of a major upswing. Higher prices are indeed indicated. The short base formed last fall affords an upside objective of 3100 and if we are to go back to the 1987 -88 base, proper if we are dealing with a single bull market, there remains a target of 3400 which has, of course, not yet been reached. Neither figure is really of major bull-market proportions. We are perfectly willing to admit that we are, at this stage, unwilling to come down firmly on the side of either interpretation of the cycle picture, nor do we see ,sny immediate need to do so, since, over the short term, the market is, in all probability, headed higher. We also freely admit that, While the 1990 decline was going on, we were persuaded by the bear-market theory, expecting that downswing to continue longer and fall lower than it actually did. Since its failure to do so, we are less certain. In any case. we think keeping in mind the two opposing arguments regarding the cyclical background will be useful as we attempt to interpret market developments in the months ahead. ANTHONY W. TAlIELL DELAFIELD, HARVEY, TAB ELL JNC. Dow Jones Industrials (1200) S & P 500 (12 00) Cumulative Index (2122/91) 2921.04 367.43 5478.43 AWTjb No statement or expression of opinion or any other matter herein contained IS, or IS to be deemed to be, dlrectlyor Indlrectty, an offeror the solicltallOn of an offerio buy or sell any secunty referred to or mentIOned The matter IS presented merely for the convenience of the subscnber While we beheve the sources of our Informatron to be rehable, we In no way represent or guarantee the accuracy thereol nor 01 the statements made herein Any acllon to be taken by the subscnber should be based on hiS own Investlgahon and information Delafield, Harvey, Tabelllnc, as a corporation and Its olltcers or employees, may now have, or may later take, pOSitions or trades In respect to any secuntles mentioned In Ihls or any future Issue, and such POSition may be different from any views now Of hereafter expressed In thiS or any other Issue Delafield, Harvey, Tabelllnc, which IS registered With the SEC as an Investment adVisor, may give adVice to liS Investment adVISOry and other customers Independently of any statements made In thiS or In any other Issue Further Informalton on any SecUfity mentioned herem IS available on request