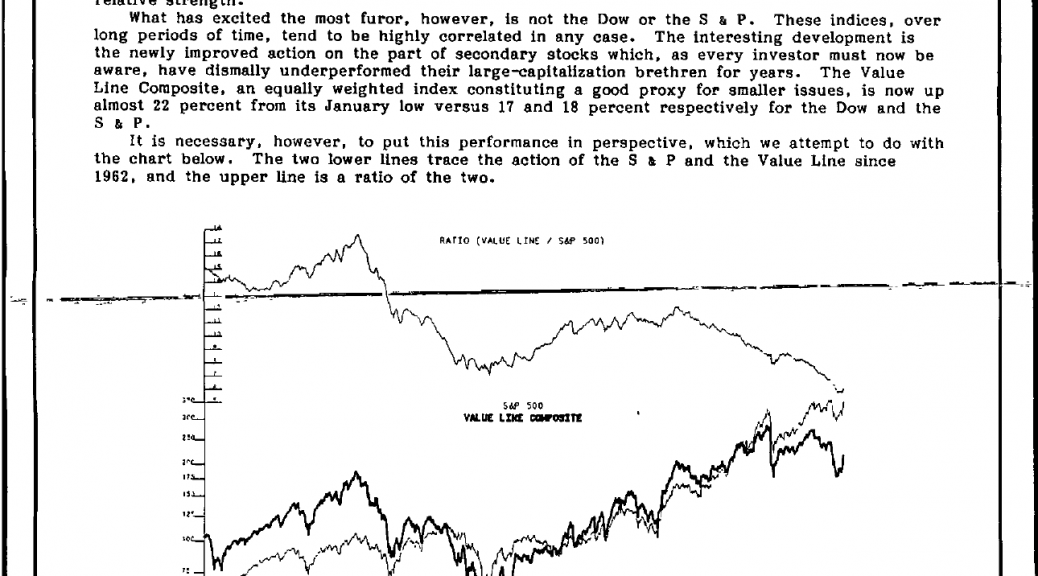 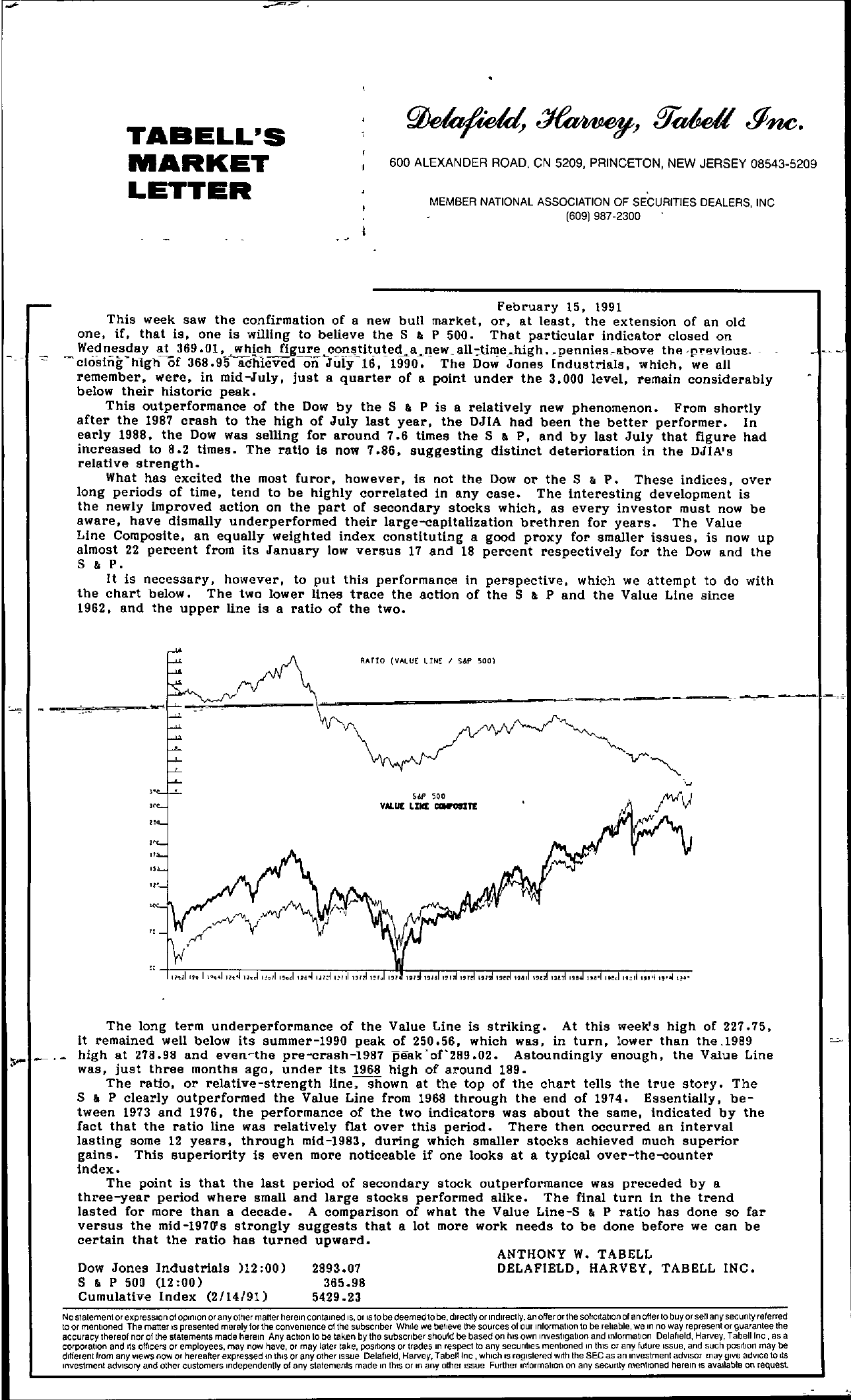 — , TABELL'S MARKET LETTER 600 ALEXANDER ROAD, CN 5209, PRINCETON, NEW JERSEY 08543-5209 MEMBER NATIONAL ASSOCIATION OF SECURITIES DEALERS, INC (609) 987-2300 February IS, 1991 This week saw the confirmation of a new bun market, or, at least. the extension of an old one, if, that is, one is willing to believe the S P 500 That particular indicator closed on ' Wedne.say 369.01,, whi,ch flgtl!!,c()ntit!eLa,!ew all-;tllI!e,high. pennie.,-above the ,pevious, closing high of 368.95 achieved on July 16, 1990, The Dow Jones Industrials, which, we all remember, were, in mid-July, just a quarter of a point under the 3,000 level, remain considerably below their historic peak. This outperformance of the Dow by the S & P is a relatively new phenomenon. From shortly after the 1987 crash to the high of July last year, the DJIA had been the better performer. In early 1988, the Dow was sell!ng for around 7.6 times the S P, and by last July that figure had increased to 8.2 times. The ratio is now 7.86, suggesting distinct deterioration in the DJIA's relative strength. What has excited the most furor, however, is not the Dow or the S & P. These indices, over long periods of time, tend to be highly correlated in any case. The interesting development is the newly improved action on the part of secondary stocks which, as every investor must now be aware, have dismally underperformed their large-capitalization brethren for years. The Value Line Composite, an equally weighted index constituting a good proxy for smaller issues, is now up almost 22 percent from its January low versus 17 and 18 percent respectively for the Dow and the S & P. It is necessary. however, to put this performance in perspective, which we attempt to do with the chart below. The two lower lines trace the action of the S P and the Value Line since 1962, and the upper line is a ratio of the two. RATIO (v….. uE LINE I S&f' 500) 5&P '500 VALUE LDE CCWOl1l1 The long term underperformance of the Value Line is striking. At this week's high of 227.75, it remained well below its summer-1990 peak of 250.56, which was, in turn, lower than the ,1989 J—- high at 278.98 and even-the pre-crash-1987 peak'of'289.02. Astoundingly enough, the Value Line was, just three months ago, under its 1968 high of around 189. The ratio, or relative-strength line, shown at the top of the chart tells the true story. The S P clearly outperformed the Value Line from 1968 through the end of 1974. Essentially, be- tween 1973 and 1976, the performance of the two indicators was about the same, indicated by the fact that the ratio line was relatively nat over this period. There then occurred an interval lasting some 12 years, through mid-1983, during which smaller stocks achieved much superior gains. This superiority is even more noticeable if one looks at a typical over-the-counter index. The point is that the last period of secondary stock outperformance was preceded by a three-year period where small and large stocks performed alike. The final turn in the trend lasted for more than a decade. A comparison of what the Value Line-S & P ratio has done so far versus the mid-1970's strongly suggests that a lot more work needs to be done before we can be certain that the ratio has turned upward. ANTHONY W. TABELL Dow Jones Industrials )12 00) 2893.07 DELAFIELD, HARVEY, TAB ELL INC. S & P 500 (1200) 365.98 Cumulative Index (2/14/91) 5429.23 No slalemenlor expression 01 opinion or any other matter herein contained IS, or IS to be deemed to be, directly or Indlreclly, an oHer orthe soliCitatIOn of an oHer to buy or sell any security referred to or mentlooed The maner IS presented merely for the convenience 01 the subscriber While we beheve the sources of our Information to be reliable, we In no way represent or guarantee the accuracy thereof nor of the statements made herem Any aclton to be taken by the subSCriber should be based on hiS own Investigation and information Oelafield, Harvey, Tabelllnc, as a corporatlOO and ItS oHlcers or employees, may now have, or may later take, posrtlons or trades In respect to any securrtles mentIOned m thIS or any future Issue, and such posrtlon may be different from any vIews now or hereafter expressed In thiS or any other Issue Delafield, Harvey, Tabe!! Inc, which IS registered wrth the SEC as an Investment advisor may give adVice to Its Investment adVISOry and other customers Independently of any statements made In thIS or In any other Issue Further mformal!oo on any secunty mentlooed herem IS available on request