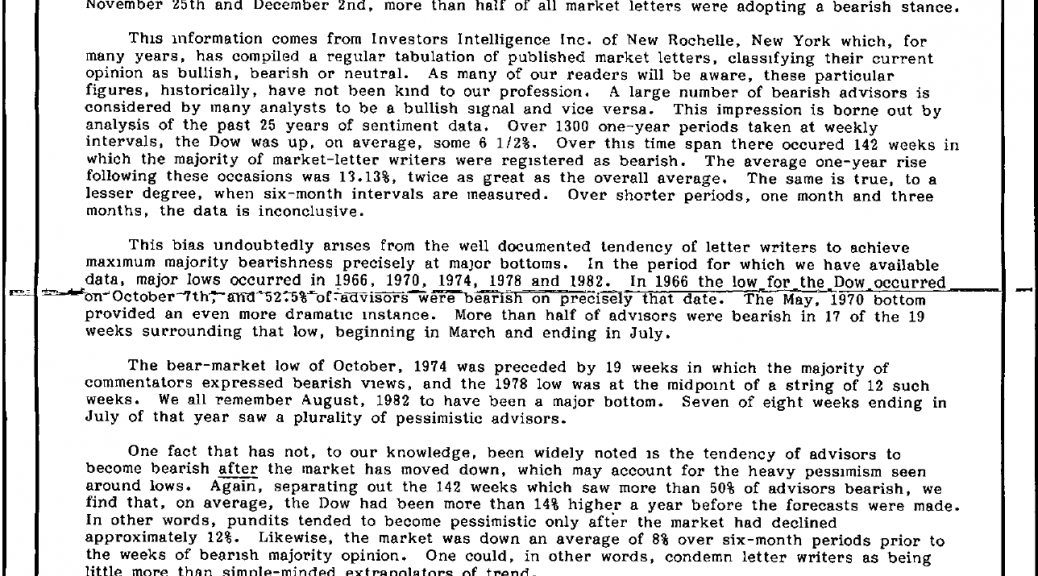 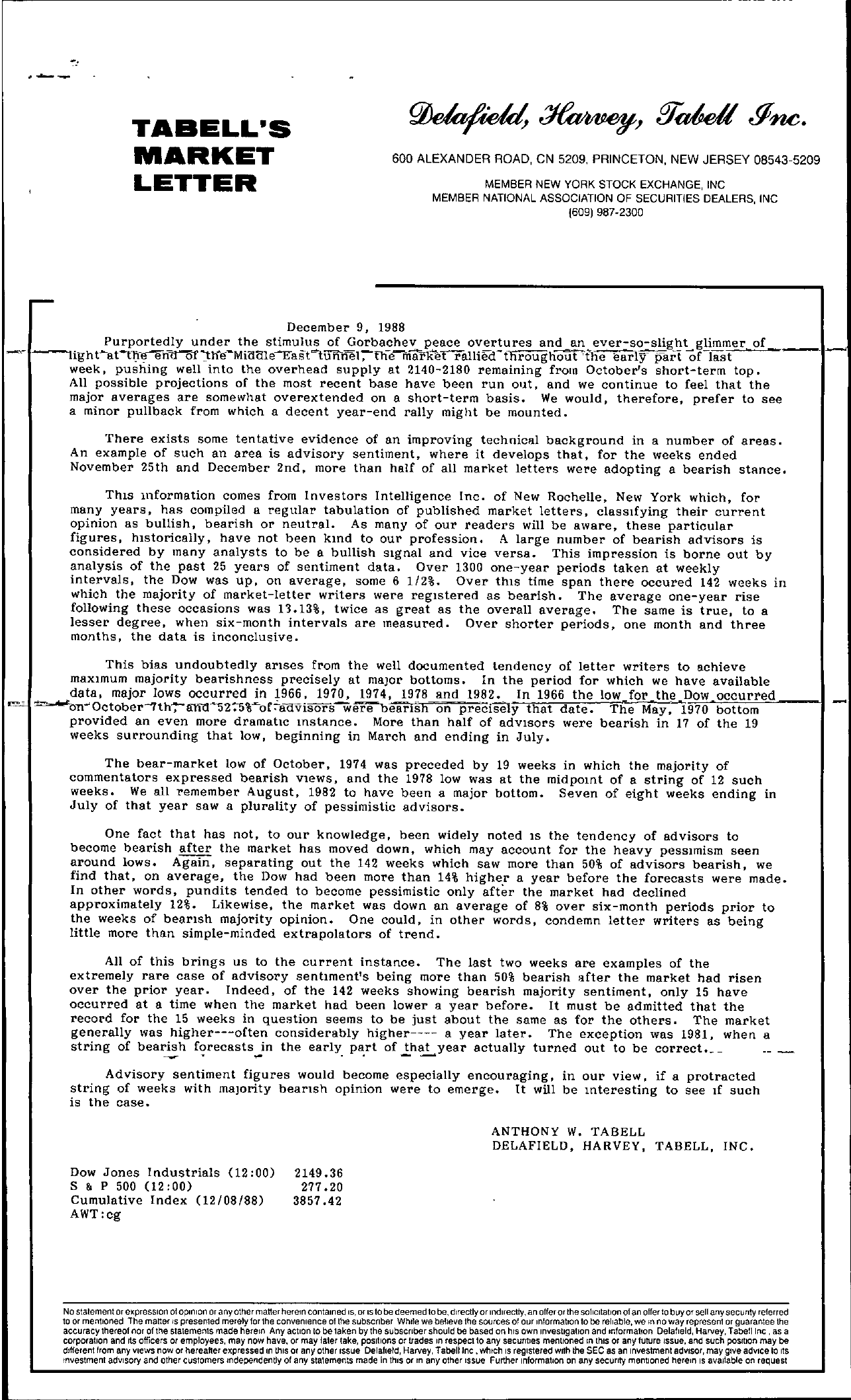 .– TABELL'S MARKET LETTER 600 ALEXANDER ROAD, eN 5209. PRINCETON, NEW JERSEY 08543-5209 MEMBER NEW YORK STOCK EXCHANGE, INC MEMBER NATIONAL ASSOCIATION OF SECURITIES DEALERS, INC (609) 987-2300 December 9, 1988 Purportedly under the stimulus of Gorbachev peace overtures and an ever-so-slight glimmer of -ctight-at-tlreehilofJh'e-Mijmer-ast'tunnelfhe-marl,rrallied-ffirough01lt'!he nrW part of last week, pushing well into the overhead supply at 2140-2180 remaining from October's short-term top. All possible projections of the most recent base have been run Ollt, and we continue to feel that the major averages are somew'hat overextended on a short-term basis. We would, therefore, prefer to see a minor pullback from which a decent year-end rally might be mounted. There exists some tentative evidence of an improving technical background in a number of areas. An example of such an area is advisory sentiment. where it develops that. for the weeks ended November 25th and December 2nd, more than half of all market letters were adopting a bearish stance. Thls lnformation comes from Investors Intelligence Inc. of New Rochelle. New York which, for many years, has compiled a regular tabulation of published market letters. claSSIfying their current opinion as bullish, bearish or neutral. As many of our readers will be aware, these particular figures, hIstorically, have not been kInd to our profession. A large number of bearish advisors is considered by many analysts to be a bullish slgnal and vice versa. This impression is borne out by analysis of the past 25 years of sentiment data. Over 1300 one-year periods taken at weekly intervals, the Dow was up, on average, some 6 1/2. Over thls time span there occured 142 weeks in which the majority of market-letter writers were reglstered as bearish. The average one-year rise following these occasions was 1'3.13. twice as great as the overall average. The same is true, to a lesser degree. when six-month intervals are measured. Over shorter periods. one month and three months, the data is inconclusive. This bias undoubtedly arlses from the well documented tendency of letter writers to achieve maXImum majority bearishness precisely at major bottoms. In the period for which we have available data, major lows occurred in 1966. 1970, 1974, 1978 and 1982. In 1966 the low for the Dow occurred nOctober-'7th7''2-5of'aavisorswe'i'ebearlsh on precisely that date. The May-I970 bottom provided an even more dramatIc lnstR.nce. More than half of advlsors were bearish in 17 of the 19 weeks surrounding that low, beginning in March and ending in July. The bear-market low of October. 1974 was preceded by 19 weeks in which the majority of commentators expressed bearish VIews, and the 1978 low was at the midpOlnt of a string of 12 such weeks. We all remember August. 1982 to have been a major bottom. Seven of eight weeks ending in July of that year saw a plurality of pessimistic advisors. One fact that has not. to our knowledge, been widely noted lS the tendency of advisors to become bearish after the market has moved down. which may account for the heavy pessImism seen around lows. Again, separating out the 142 weeks which saw more than 50 of advisors bearish, we find that, on average, the Dow had been more than 14 higher a year before the forecasts were made. In other words, pundits tended to become pessimistic only after the market had declined approximately 12. Likewise, the market was down an average of 8 over six-month periods prior to the weeks of bearIsh majority opinion. One could, in other words, condemn letter writers as being little more than simple-minded extrapolators of trend. All of this brings us to the cu rrent instance. The last two weeks are examples of the extremely rare case of advisory sentIment's being more than 50 bearish after the market had risen over the prior year. Indeed, of the 142 weeks showing bearish majority sentiment. only 15 have occurred at a time when the market had been lower a year before. It must be admitted that the record for the 15 weeks in question seems to be just about the same as for the others. The market generally was higher—often considerably higher—- a year later. The exception was 1981, when a – . – -string of bear–i-s–h forecasts in … the early part of that year actually turned out to be correct. Advisory sentiment figures would become especially encouraging, in our view, if a protracted string of weeks with majority bearlsh opinion were to emerge. It will be lnteresting to see If such is the case. Dow Jones Industrials (12 00) S & P 500 (1200) Cumulative Index (12/08/88) AWTcg 2149.36 277.20 3857.42 ANTHONY W. TABELL DELAFIELD, HARVEY, TABELL, INC. No statement or expression at opinion or any other matter herein contained IS, or IS to be deemed to be, directly or indirectly, an offeror the soliCitation of an offer to buy or sell any security referred to or mentioned The matter IS presented merely for the convenience of the subSCriber While we beheve the sources of our Intormatlon to be rehable, we In no way represen1 or guarantee the accuracy Ihereof nor of the slatements made herein Any ac\lon to be taken by the subSCriber should be based on hiS own Investigation and information Delafield, Harvey, Tabe!1lnc , as a corporation and lis officers or employees, may now have, or may later lake, positions Of trades In respeclto any securities mentIOned In thiS Of any future Issue, and such pOSitIOn may be different from any views now or hereafter expressed In thiS or any other Issue Delafield, Harvey, Tabelllnc, which IS registered wrth the SEC as an Investment adVisor, may give adVice to ItS Investment adVISOry and other customers mdependently of any statements made In thiS or In any other Issue Further Informabon on any securtty menttoned herein IS available on request