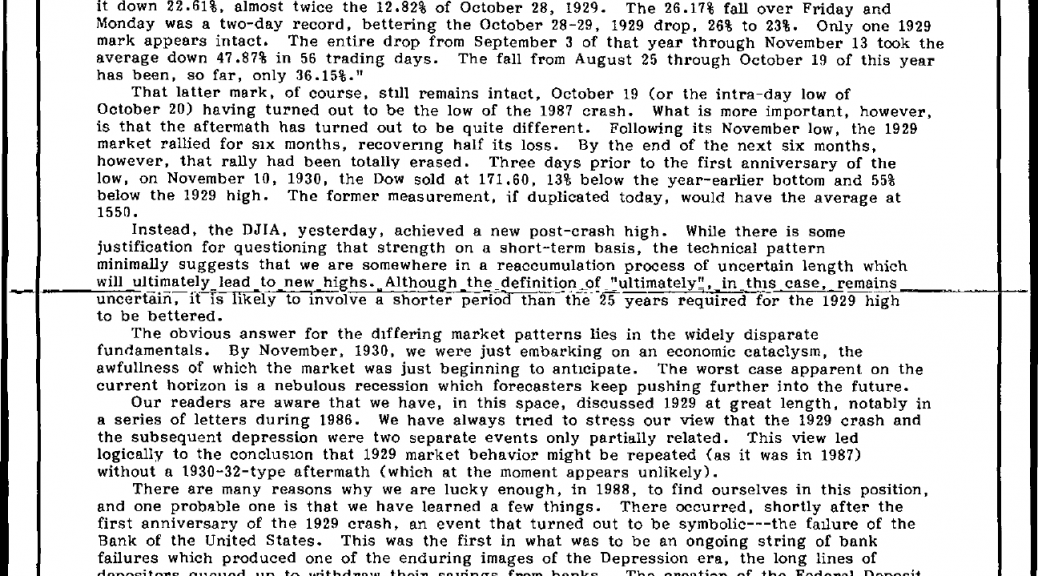 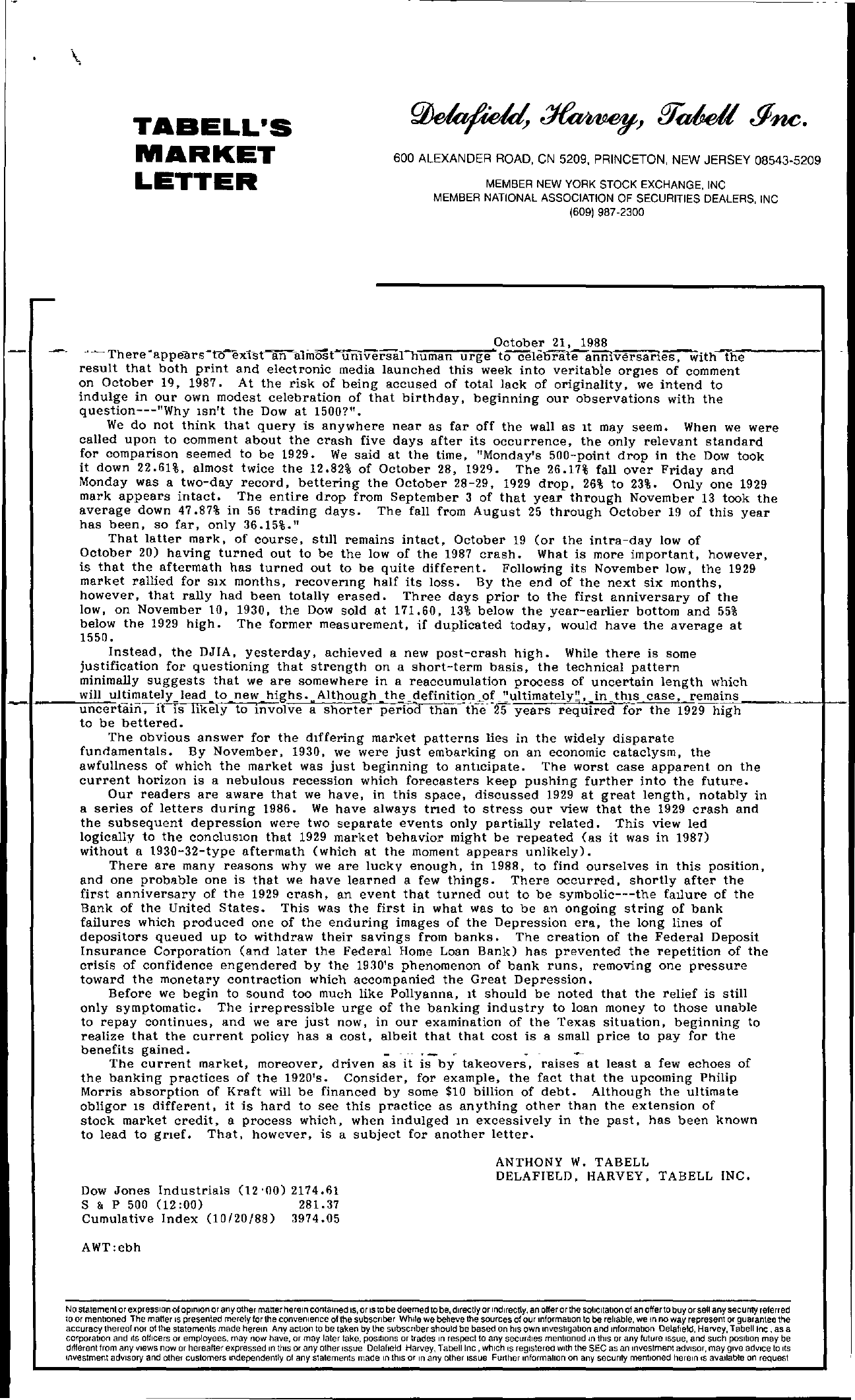 ———————————————————————- – \ TABELL'S MARKET LETTER 600 ALEXANDER ROAD, CN 5209, PRINCETON, NEW JERSEY 08543-5209 MEMBER NEW YORK STOCK EXCHANGE, INC MEMBER NATIONAL ASSOCIATION OF SECURITIES DEALERS, INC (6091 967-2300 . Th ereappears -t(,.'exlst—an–almDs tUniVersarli-u-m.a-n-u–r–g'e,..Otoc'tCobeelero2ra1t,e-1a9i8li8li'ver-s-aries-with-t'h-e——t result that both print and electronic media launched this week into veritabie orgIes of comment on October 19, 1987. At the risk of being accused of total lack of originality, we intend to indulge in our own modest celebration of that birthday. beginning our observations with the question—Why Isn't the Dow at 1500. We do not think that query is anywhere near as far off the wall as It may seem. When we were called upon to comment about the crash five days after its occurrence, the only relevant standard for comparison seemed to be 1929. We said at the time. Monday's 500-point drop in the Dow took it down 22.61, almost twice the 12.82 of October 28, 1929. The 26.17 fall over Friday and Monday was a two-day record, bettering the October 28-29, 1929 drop, 26 to 23. Only one 1929 mark appears intact. The entire drop from September 3 of that year through November 13 took the average down 47.87 in 56 trading days. The fall from August 25 through October 19 of this year has been, so far, only 36.15. That latter mark, of course, stIll remains intact, October 19 (or the intra-day low of October 20) having turned out to be the low of the 1987 crash. What is more important, however, is that the aftermath has turned out to be quite different. Following its November low, the 1929 market rallied for SIX months, recovenng half its loss. By the end of the next six months, however, that rally had been totally erased. Three days prior to the first anniversary of the low, on November 10, 1930, the Dow sold at 171.60, 13 below the year-earlier bottom and 55 below the 1929 high. The former measurement, if duplicated today, would have the average at 1550. Instead, the DJIA, yesterday, achieved a new post-crash high. While there is some justification for questioning that strength on a short-term basis. the technical pattern minimally suggests that we are somewhere in a reaccumulation process of uncertain length which 1.1W1I.'.IUltimately-lead.to new highs.HAlthough thdefinitionof ultimately. in ths case. rema.ins I-1 uncertaiTi-;-n is hkely to Involve a shorter–period thanihe–25 years required for the 1929 high to be bettered. The obvious answer for the dIffering market patterns lies in the widely disparate fundamentals. By November. 1930. we were just embarking on an economic cataclysm, the awfullness of which the market was just beginning to antICipate. The worst case apparent on the current horizon is a nebulous recession which forecasters keep pushing further into the future. Our readers are aware that we have, in this space, discussed 1929 at great length, notably in a series of letters during 1986. We have always tned to stress our view that the 1929 crash and the subsequent depression were two separate events only partially related. This view led logically to the conclUSIOn that 1929 market behavior might be repeated (as it was in 1987) without a 1930-32-type aftermath (which at the moment appears unlikely). There are many reasons why we are lucky enough. in 1988. to find ourselves in this position, and one probable one is that we have learned a few things. There occurred, shortly after the first anniversary of the 1929 crash, an event that turned out to be symbolic—the failure of the Bank of the United States. This was the first in what was to be an ongoing string of bank failures whiCh produced one of the enduring images of the Depression era, the long lines of depositors queued up to withdraw their savings from banks. The creation of the Federal Deposit Insurance Corporation (and later the Federal Home Loan Bank) has prevented the repetition of the crisis of confidence engendered by the 19301s phenomenon of bank runs. removing one pressure toward the monetary contraction which accompanied the Great Depression. Before we begin to sound too much like Pollyanna. It should be noted that the relief is still only symptomatic. The irrepressible urge of the banking industry to loan money to those unable to repay continues, and we are just now. in our examination of the Texas situation, beginning to realize that the current policy has a cost, albeit that that cost is a small price to pay for the benefits gained. . . The current market, moreover. driven as it is by takeovers, raises at least a few echoes of the banking practices of the 1920's. Consider, for example. the fact that the upcoming Philip Morris absorption of Kraft will be financed by some 10 billion of debt. Although the ultimate Obligor IS different, it is hard to see this practice as anything other than the extension of stock market credit. a process which. when indulged In excessively in the past. has been known to lead to grIef. That. however. is a subject for another letter. Dow Jones Industrials 02 '00) 2174.61 S & P 500 02 00) 281.37 Cumulative Index (0120188) 3974.05 ANTHONY W. TABELL DELAFIELD, HARVEY, TABELL INC. AWTebh No statement or expression 01 OpIniOn or any other matter herein contained IS, or IS to be deemed 10 be, directly or Indirectly, an offeror the soliCitation of an offerlo buy or sell any security referred to or menlloned The matter IS presenled merely for the convenience of the subscnber While we believe the sources of our information to be reliable, we m no way represent or guarantee the accuracy thereof nor of the statements made herein Any action to be taken by the subscnber should be based on hiS own Investigation and mformatlon Delafield, Harvey, Tabell Inc , as a corporatton and Its officers or employees, may now have, or may later take, poSitions or trades m respect to any securliles mentioned m thiS or any future Issue, and such positiOn may be drlferent from any views now or hereafter expressed m thiS or any other Issue Delafield Harvey, Tabellinc , which IS registered With the SEC as an mveslmen1 adVisor, may give adVice to ItS Investment adVISOry and other customers Independently 01 any statements made In thiS or In any other Issue FUrlher Information on any security mentioned herem IS avallabte on request