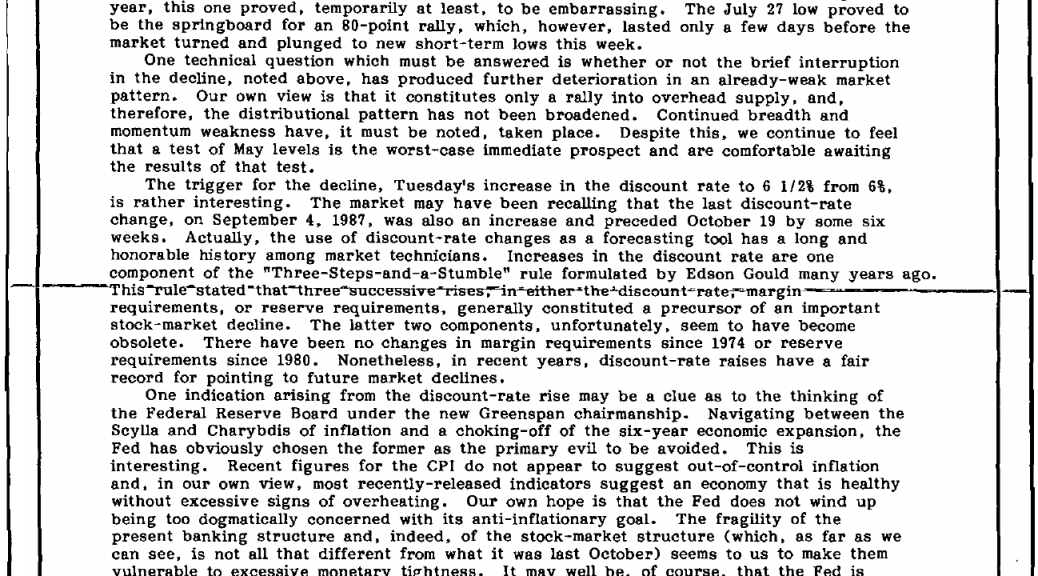 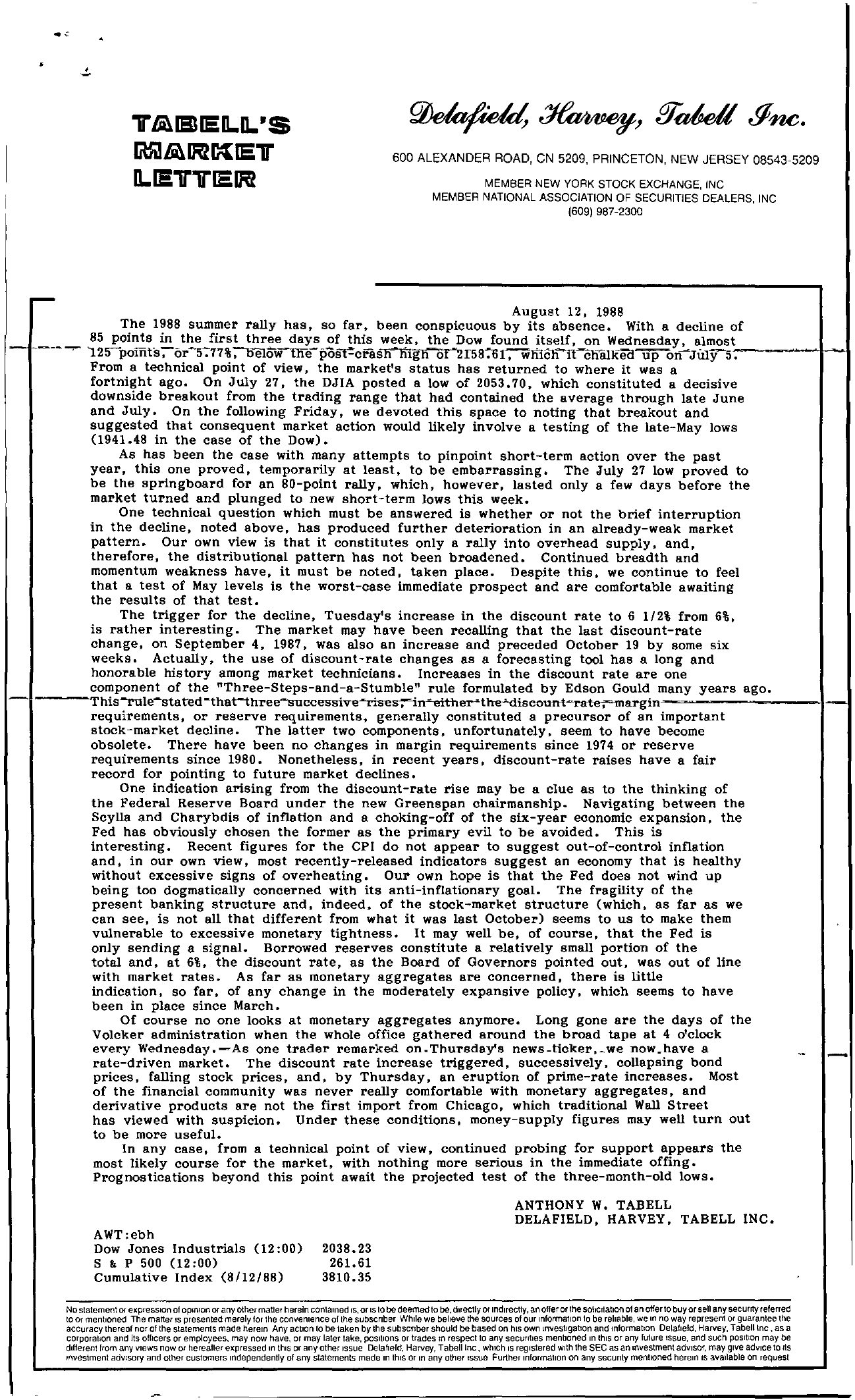 '11'1Bl1En..n..' s reil IRl 1E'11' n..1E'11''11'1E1Rl 600 ALEXANDER ROAD, CN 5209, PRINCETON, NEW JERSEY 08543-5209 MEMBER NEW YORK STOCK EXCHANGE, INC MEMBER NATIONAL ASSOCIATION OF SECURITIES DEALERS, INC (609) 987-2300 August 12, 1988 The 1988 summer rally has, so far, been conspicuous by its absence. With a decline of 85 points in the first three days of this week, the Dow found itself, on Wednesday, almost —- 125-poffits;-or-5-77;-beIowrn-e-poBtcrasnIlig1ionr5801-WIlicll-irchalRedU'j)'OnJiITY–5-.——I-1 From a technical point of view, the market's status has returned to where it was a fortnight ago. On July 27, the DJIA posted a low of 2053.70, which constituted a decisive downside breakout from the trading range that had contained the average through late June and July. On the following Friday, we devoted this space to noting that breakout and suggested that consequent market action would likely involve a testing of the late-May lows (1941.48 in the case of the Dow). As has been the case with many attempts to pinpoint shcrt-term action over the past year, this one proved, temporarily at least, to be embarrassing. The July 27 low proved to be the springboard for an 80-point rally, whiCh, however, lasted only a few days before the market turned and plunged to new short-term lows this week. One technical question which must be answered is whether or not the brief interruption in the decline, noted above, has produced further deterioration in an already-weak market pattern. Our own view is that it constitutes only a rally into overhead supply, and, therefore, the distributional pattern has not been broadened. Continued breadth and momentum weakness have, it must be noted, taken place. Despite this, we continue to feel that a test of May levels is the worst-case immediate prospect and are comfortable awaiting the results of that test. The trigger for the decline, Tuesday's increase in the discount rate to 6 1/2 from 6, is rather interesting. The market may have been recalling that the last discount-rate change, on S!ptember 4, 1987, was also an increase and preceded October 19 by some six weeks. Actually, the use of discount-rate changes as a forecasting tool has a long and honorable history among market technicians. Increases in the discount rate are one component of the Three-Steps-and-a-Stumble rule formulated by Edson Gould many years ago. —I—-'This-rule–stated–thathreesuccessive'Tisesin'cither-i.the'-discount'rate, margin———-I requirements, or reserve requirements, generally constituted a precursor of an important stock-market decline. The latter two components, unfortunately, seem to have become obsolete. There have been no changes in margin requirements since 1974 or reserve requirements since 1980. Nonetheless, in recent years, discount-rate raises have a fair record for pointing to future market declines. One indication ariSing from the discount-rate rise may be a clue as to the thinking of the Federal Reserve Board under the new Greenspan chairmanship. Navigating between the Scylla and Charybdis of inflation and a choking-off of the six-year economic expansion, the Fed has obviously chosen the former as the primary evil to be avoided. This is interesting. Recent figures for the CPI do not appear to suggest out-of-control inflation and, in our own view, most recently-released indicators suggest an economy that is healthy without excessive signs of overheating. Our own hope is that the Fed does not wind up being too dogmatically concerned with its anti-inflationary goal. The fragility of the present banking structure and, indeed, of the stock-market structure (which, as far as we can see, is not all that different from what it was last October) seems to us to make them vulnerable to excessive monetary tightness. It may well be, of course, that the Fed is only sending a signal. Borrowed reserves constitute a relatively small portion of the total and, at 6, the discount rate, as the Board of Governors pointed out, was out of line with market rates. As far as monetary aggregates are concerned, there is little indication, so far, of any change in the moderately expansive policy, which seems to have been in place since March. Of course no one looks at monetary aggregates anymore. Long gone are the days of the Volcker administration when the whole office gathered around the broad tape at 4 o'clock every Wednesday.-As one trader remarked on.Thursdays newsticker,we nowhave a rate-driven market. The discount rate increase triggered, successively, collapsing bond – prices, falling stock prices, and, by Thursday, an eruption of prime-rate increases. Most of the financial community was never really comfortable with monetary aggregates, and derivative products are not the first import from Chicago, which traditional Wall Street has viewed with suspicion. Under these conditions, money-supply figures may well turn out to be more useful. In any case, from a technical point of view, continued probing for support appears the most likely course for the market, with nothing more serious in the immediate offing. Prognostications beyond this point await the projected test of the three-month-old lows. AWTebh Dow Jones Industrials (12 00) S & P 500 (1200) Cumulative Index (8/12/88) 2038.23 261. 61 3810.35 ANTHONY W. TABELL DELAFIELD, HARVEY, TABELL INC. No statement or expression of opInion or any other matter herein contained 1, or IS to be deemed to be, directly Of Indirectly, an offer or the sohcrlatlon of an offerio buyor sen any securrty referred to or mentioned The matter IS presented merely for the convenience 01 the subSCriber While we beheve the sources of our mformallon to be rehable, we In no way represent or guarantee the accuracy thereof nor of the statements made herein Any acllon to be laken by the subscnber should be based on hiS own investigation and mformallon Delafield, Harvey, Tabellinc ,as a corporation and lis officers or employees, may now have, or may later take, poSitions or trades In respect to any secuntles mentioned In thiS or any future Issue, and such pOSition may be dlfferen1 from any views now or hereaflerexpressed In thiS or any other Issue Detaeld, Harvey, Tabell Inc, whICh IS registered With the SEC as an Investment advisor, may give advice to rts Investment adVISOry and other cuS10mers Independently of any statements made In thiS or In any other Issue Further InformaMn on any secUrity mentioned herein IS available on request