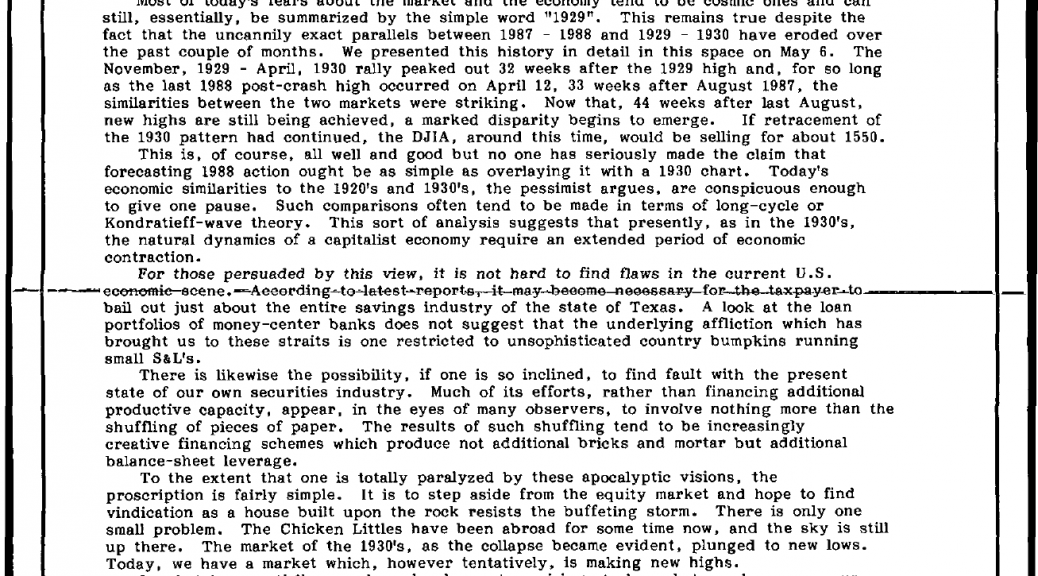 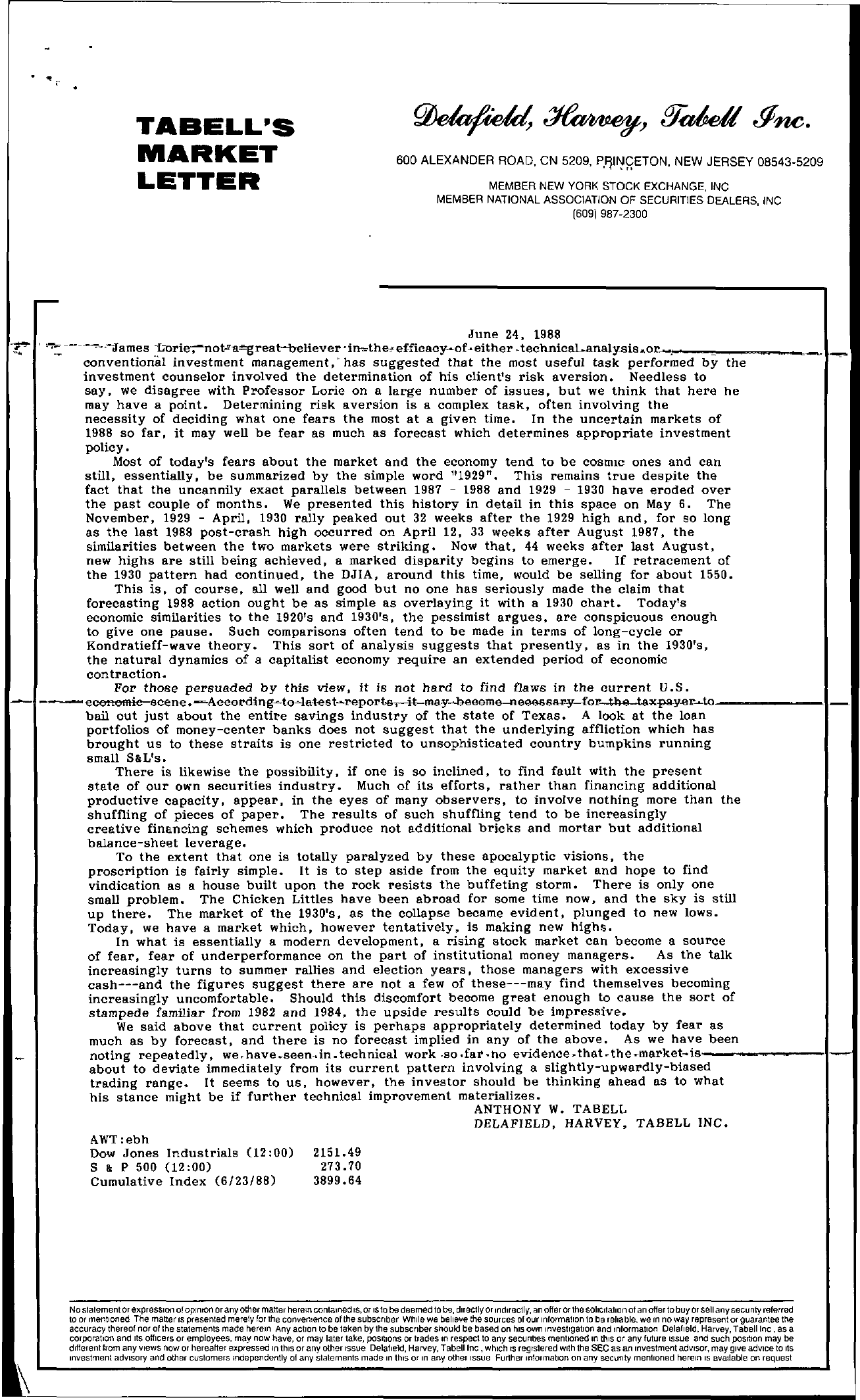 TABELL'S MARKET LETTER 600 ALEXANDER ROAD, eN 5209, P,F1II'1RETON, NEW JERSEY 08543-5209 MEMBER NEW YORK STOCK EXCHANGE, INC MEMBER NATIONAL ASSOCIATION OF SECURITIES DEALERS, INC (609) 987-2300 – June 24, 1988 .- —-, '-James torie;-not…a;great–believer i&.th e ef-ficacy….of-'- either technicaL.analy,sis , oo)r' '' .l conventional investment management, has suggested that the most useful task performed by the investment counselor involved the determination of his clientts risk aversion. Needless to say. we disagree with Professor Lorie on a large number of issues. but we think that here he may have a point. Determining risk aversion is a complex task. often involving the necessity of deciding what one fears the most at a given time. In the uncertain markets of 1988 so far, it may well be fear as much as forecast which determines appropriate investment policy, Most of today's fears about the market and the economy tend to be cosmlC ones and can still, essentially, be summarized by the simple word 111929. This remains true despite the fact that the uncannily exact parallels between 1987 – 1988 and 1929 – 1930 have eroded over the past couple of months, We presented this history in detail in this space on May 6. The November, 1929 – April, 1930 rally peaked out 32 weeks after the 1929 high and, for so long as the last 1988 post-crash high occurred on April 12, 33 weeks after August 1987, the similarities between the two markets were striking. Now that, 44 weeks after last August, new highs are still being aChieved, a marked disparity begins to emerge. If retracement of the 1930 pattern had continued, the DJIA, around this time, would be selling for about 1550. This is, of course, all well and good but no one has seriously made the claim that forecasting 1988 action ought be as simple as overlaying it with a 1930 chart. Today's economic similarities to the 1920's and 1930's, the pessimist argues. are conspicuous enough to give one pause. Such comparisons often tend to be made in terms of long-cycle or Kondratieff-wave theory. This sort of analysis suggests that presently, as in the 1930's, the natural dynamics of a capitalist economy require an extended period of economic contraction. For those persuaded by this view, it is not hard to find flaws in the current U,S, 1–I-'—ec6fl6mie-scene -fr n. .tt bail out just about the entire savings industry of the state of Texas, A look at the loan portfolios of money-center banks does not suggest that the underlying affliction which has brought us to these straits is one restricted to unsophisticated country bumpkins running small SilL's. There is likewise the possibility. if one is so inclined, to find fault with the present state of our own securities industry. Much of its efforts, rather than financing additional productive capacity, appear. in the eyes of many observers, to involve nothing more than the shuffling of pieces of paper, The results of such shuffling tend to be increasingly creative financing schemes which produce not additional bricks and mortar but additional balance-sheet leverage. To the extent that one is totally paralyzed by these apocalyptic visions, the proscription is fairly simple. It is to step aside from the equity market and hope to find vindication as a house built upon the rock resists the buffeting storm. There is only one small problem. The Chicken Littles have been abroad for some time now. and the sky is still up there. The market of the 1930's, as the collapse became evident. plunged to new lows. Today, we have a market Which, however tentatively, is making new highs. In what is essentially a modern development, a rising stock market can become a source of fear, fear of underperformance on the part of institutional money managers. As the talk increasingly turns to summer rallies and election years, those managers with excessive cash—and the figures suggest there are not a few of these—may find themselves becoming increasingly uncomfortable. Should this discomfort become great enough to cause the sort of stampede familiar from 1982 and 1984, the upside results could be impressive. We said above that current policy is perhaps appropriately determined today by fear as much as by forecast. and there is no forecast implied in any of the above. As we have been noting repeatedly, we.have..-seen.. in.technical work -so.farho evidence,..thatr' about to deviate immediately from its current pattern involving a slightly-upwardly-biased trading range. It seems to us, however, the investor should be thinking ahead as to what his stance might be if further technical improvement materializes. ANTHONY W. TABELL DELAFIELD, HARVEY. TABELL INC. AWTebh Dow Jones Industrials (1200) S & P 500 (12 00) Cumulative Index (6/23/88) 2151.49 273.70 3899.64 No statement or expression 01 opinIOn or any other matler herem contained IS, or IS 10 be deemed to be, directly or indirectly, an offer or the solicrta1lOn of an offer to buy or sell any security referred to or mentioned The matter IS presented merely for the convenience of the subscnber While we believe the sources 01 our InformallOn \0 be reliable, we In no way represent or guarantee the accuracy thereof nor of the statements made herein Any action to be taken by the subScriber should be based on hiS own Investigation and mformallOn Delafield, Harvey, Tabelllnc, as a corporation and ItS officers or employees, may now have, or may later take, positions or trades In respect to any securrlles mentIOned In thiS or any future ISsue and such posrtlOn may be secdlfterent from any views now or hereaNer expressed In thiS or any other Issue Delafield, Harvey, Tabellinc , which IS registered wrth Ihe as an Investment adVisor, may give adVice 10 lIs Investment adVISOry and other customers Independently of any statements made In thiS or In any other Issue Further mformatlon on any secunty mentioned herein IS available on request