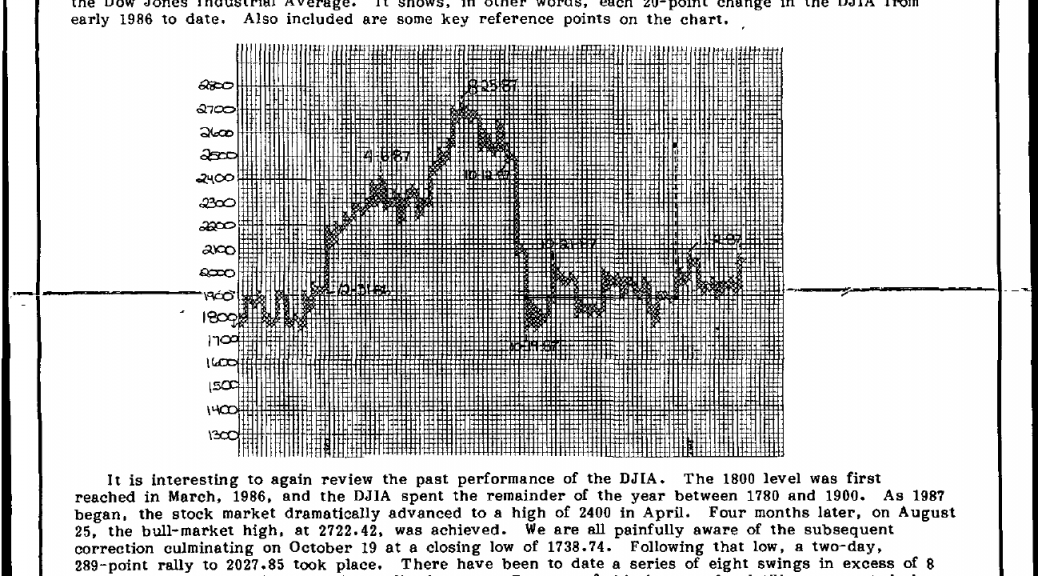 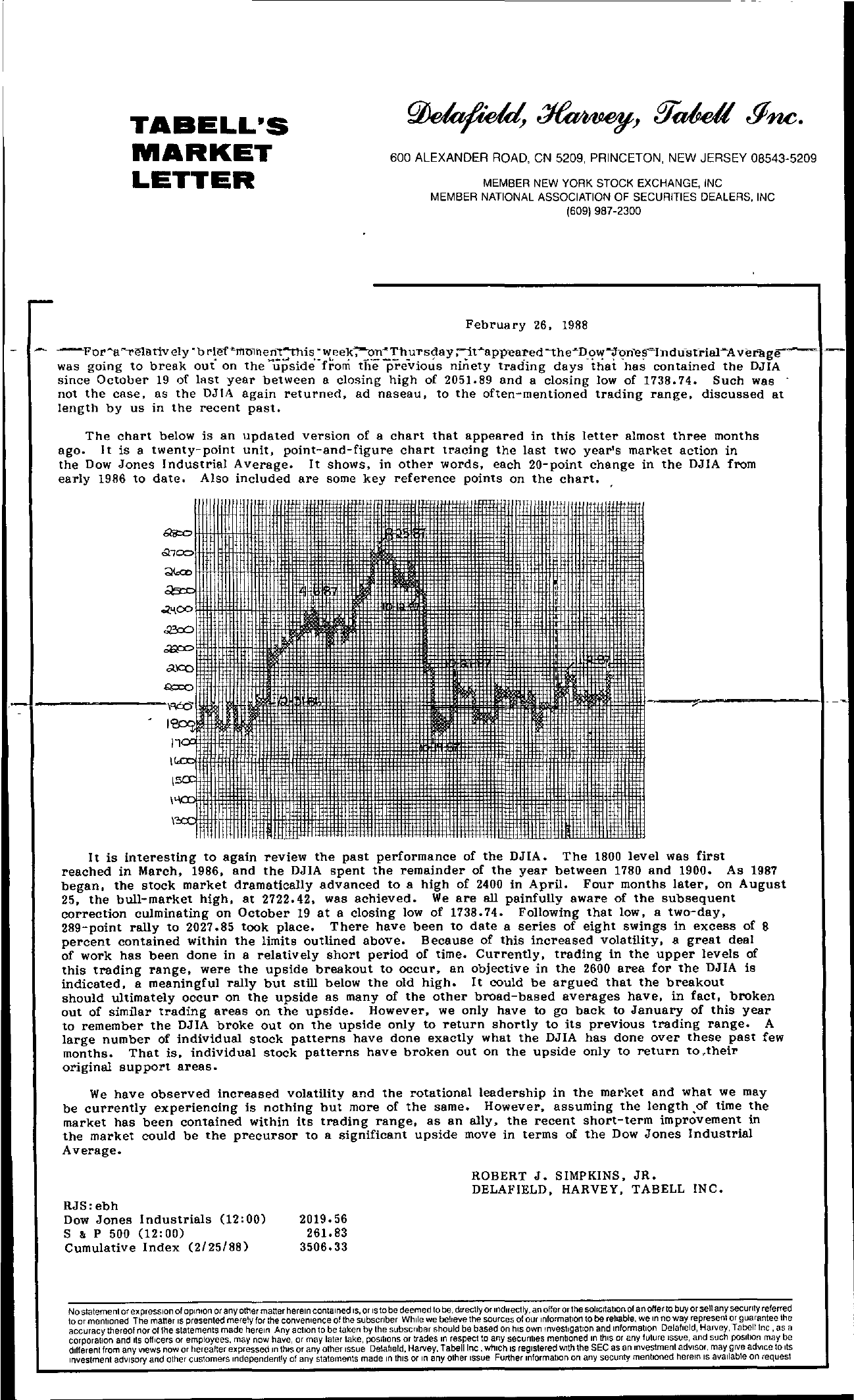 — — — – – – – – – – – – – – – – – – – – – – – – – – – – – – – – – – – – TABELL'S MARKET LETTER 600 ALEXANDER ROAD, CN 5209. PRINCETON. NEW JERSEY 08543-5209 MEMBER NEW YORK STOCK EXCHANGE, INC MEMBER NATIONAL ASSOCIATION OF SECURITIES DEALERS, INC (6091987-2300 February 26. 1988 ..–1–.– ,-For….a –rmativ ely b r-1-ef-Jft'01nen-'–rhis week.;–on…. Thul'sday ;-it…..app-eared theDow–J-on-eS.'Indu-strial'''-Au'… was going to break out on the 'upsidefrom tile previous ninety trading days -that -has contained the since October 19 of last year between a closing high of 2051.89 and a closing low of 1738.74. Such was . not the case, 8S the DJIA again returned, ad naseau, to the often-mentioned trading range, discussed at length by us in the recent past. The chart below is an updated version of a chart that appeared in this letter almost three months ago. It is a twenty-point unit, point-and-figure chart tracing the last two year's market action in the Dow Jones Industrial Average. It shows, in other words, each 20-point change in the DJIA from early 1986 to date. Also included are some key reference points on the chart. It is Interesting to again review the past performance of the DJIA. The 1800 level was first reached in March, 1986, and the DJIA spent the remainder of the year between 1780 and 1900. As 1987 began. the stock market dramatically advanced to a high of 2400 in April. Four months later, on August 25, the bull-market high, at 2722.42, was achieved. We are sll painfully aware of the subsequent correction culminating on October 19 at a closing low of 1738.74. Following that low, a two-day, 289-point rally to 2027.85 took place. There have been to date a series of eight swings in excess of 8 percent contained within the limits outlined above. Because of this increased volatility, a great deal of work has been done in a relatively short period of time. Currently, trading in the upper levels of this trading range, were the upside breakout to occur, an objective in the 2600 area for the DJIA is indicated, a meaningful rally but still below the old high. It could be argued that the breakout should ultimately occur on the upside as many of the other broad-based averages have, in fact, broken out of similar trading areas on the upside. However, we only have to go back to January of this year to remember the DJIA broke out on the upside only to return Shortly to its previous trading range. A large number of individual stock patterns have done exactly what the DJIA has done over these past few months. That is. individual stock patterns have broken out on the upside only to return totheir original support areas. We have observed increased volatility and the rotational leadership in the market and what we may be currently experiencing is nothing but more of the same. However, assuming the length ,of time the market has been contained within its trading range, as an ally, the recent short-term improvement in the market could be the precursor to a significant upside move in terms of the Dow Jones Industrial Average. RJSebh Dow Jones Industrials (1200) S & P 500 (1200) Cumulative Index (2/25/88) 2019.56 261.83 3506.33 ROBERT J. SIMPKINS, JR. DELAFIELD, HARVEY, TAB ELL INC. No statement or expression of oplnton or any other matter herem contained IS, or IS to be deemed to be, directly or mdnecUy, an offer or the soliCitatIOn of an offer to buy or sell any secUrity referred to or mentioned The matter IS presented merely for Ihe conventence of the subSCriber While we beheve the sources of our Information to be rehable, we mno way represent or guarantee the accuracy thereof norol Ihe statements made herein Any action to be taken by the subSCriber should be based on hiS own investigation and Information Delafield, Harvey, Tabel! Inc, as a corporation and Its officers or employees. may now have, or may later take, poSItIOns or trades In respect to any secuntles mentioned In thiS or any lulure Issue, and such posilion may be different from any views now or hereafter expressed In thiS or any other Issue Delafield, Harvey, Tabetl Inc, which IS registered Wlththe SEC as an Investment adVisor, may gIVe adVice to Its Investment adVISOry and other cuS10mers Independently of any statements made In thiS or In any other ISSue Further information on any securrty mentioned herein IS avallabte on request