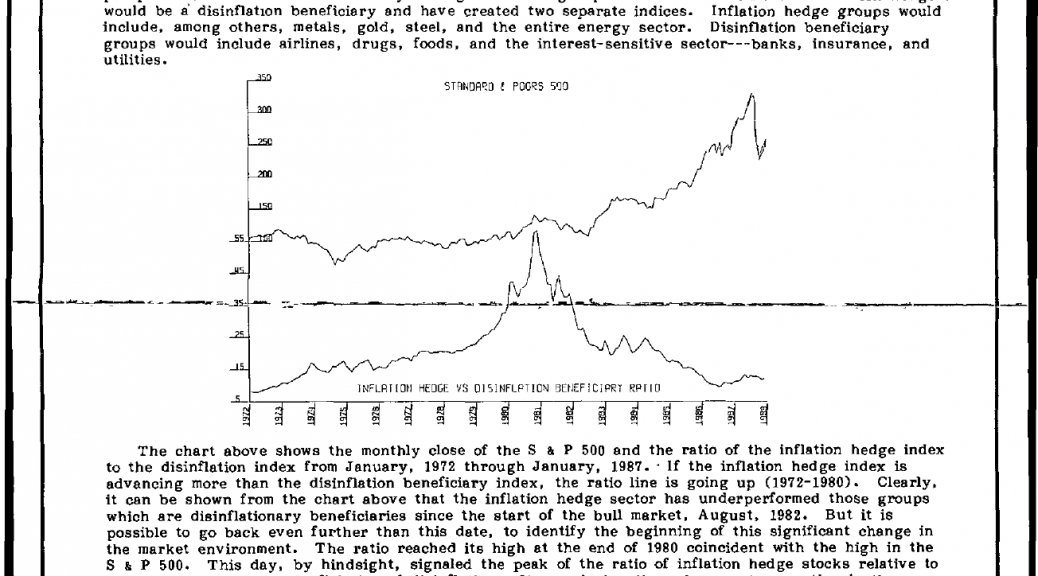 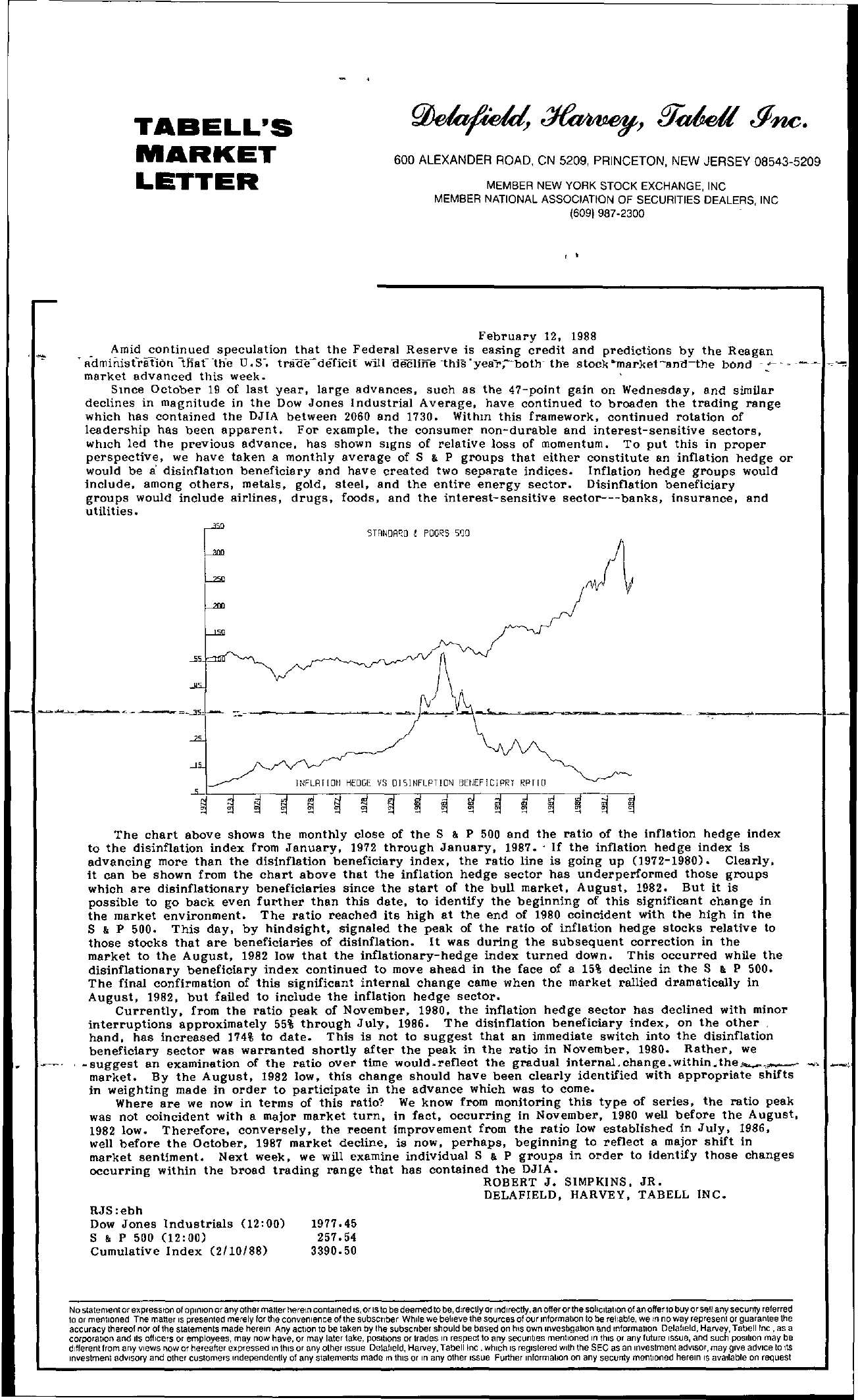 TABELL-S MARKET LETTER 600 ALEXANDER ROAD, CN 5209, PRINCETON, NEW JERSEY 08543-5209 MEMBER NEW YORK STOCK EXCHANGE, INC MEMBER NATIONAL ASSOCIATION OF SECURITIES DEALERS, INC (6091 987-2300 ,. February 12, 1988 mi9 onti!le speculation that the Federal Reserve is easing credit and predictions by the Reagan administration tnat the D.8-. traoe-deficit wIll aecIine -this'year;-both- the stock ….market-antl-the bond market advanced this week .. Smce October 19 of last year. large advances. such as the 47-point gain on Wednesday. and similar declines in magnitude in the Dow Jones Industrial Average, have continued to broaden the trading range which has contained the DJIA between 2060 and 1730. Withm this framework. continued rotation of leadership has been apparent. For example, the consumer non-durable and interest-sensitive sectors, WhICh led the previous advance, has shown SIgns of relative loss of momentum. To put this in proper perspectiv, we have taken a monthly average of S &. P groups that either constitute an inflation hedge or would be a disinflatIon beneficiary and have created two separate indices. Inflation hedge groups would include. among others, metals. gold. steel, and the entire energy sector. Disinflation beneficiary groups would include airlines, drugs, foods, and the interest-sensitive sector—banks. insurance, and utilities. E eSTRNORD POORS 5QO lNFLRflOtI HEDGE VS OISINFLPTlDN BEtIEFIC1PRY RPTIO The chart above shows the monthly close of the S P 500 and the ratio of the inflation hedge index to the disinflation index from January. 1972 through January, 1987. If the inflation hedge index is advancing more than the disinflation beneficiary index. the ratio line is going up (1972-1980). Clearly. it can be shown from the chart above that the inflation hedge sector has underperformed those groups which are disinf1ationary beneficiaries since the start of the bull market, August. 1982. But it is possible to go back even further than this date. to identify the beginning of this significant change in the market environment. The ratio reached its high at the end of 1980 coincident with the high in the S P 500. This day, by hindsight, signaled the peak of the ratio of inflation hedge stocks relative to those stocks that are beneficiaries of disinflation. It was during the subsequent correction in the market to the August. 1982 low that the inflationary-hedge index turned down. This occurred while the disinflationary beneficiary index continued to move ahead in the face of a 15 decline in the S & P 500. The final confirmation of this Significant internal change came when the market rallied dramatically in August, 1982, but failed to include the inflation hedge sector. Currently. from the ratio peak of November 1980. the inflation hedge sector has declined with minor interruptions approximately 55 through July, 1986. The disinflation beneficiary index. on the other hand. has increased 174 to date. This is not to suggest that an immediate switch into the disinflation beneficiary sector was warranted shortly after the peak in the ratio in November. 1980. Rather. we -suggest an examination of the ratio over time wouldreflect the gradual internal.change.within … the –' market. By the August, 1982 low. this change should have been clearly identified with appropriate shifts in weighting made in order to participate in the advance which was to come. Where are we now in terms of this ratio We know from monitoring this type of series. the ratio peak was not coincident with a major market turn, in fact. occurring in November. 1980 well before the August, 1982 low. Therefore. conversely. the recent improvement from the ratio low established in July. 1986. well before the October, 1987 market decline. is now, perhaps, beginning to reflect a major shift in market sentiment.. Next week, we will examine individual S &. P groups in order to identify those changes occurring within the broad trading range that has contained the DJIA. ROBERT J. SIMPKINS, JR. DELAFIELD, HARVEY, TABELL INC. RJSebh Dow Jones Industrials (1200) S & P 500 (1200) Cumulative Index (2/10/88) 1977.45 257.54 3390.50 No statement or expressIOn of opInion or any other matter herein contained IS, or IS to be deemed to be, dlreclly or Indirectly, an offer or the soliCitation of an offer 10 buy or s!! any secUrity referred to or men1lOned The matter IS presented merely for the convenience of the subSCriber While we believe the sources of our Information to be reliable, we m no way represent or guarantee the accuracy thereof nor of the statements made herem Any action to be taken by the subscnber should be based on hiS own Investigation and Information Delafield, Harvey, Tabell Inc , as a corpora\!on and ItS officers or employees, may now have, or may later take, pOSitIOns or trades In respect to any secuntles mentIOned In thiS or any future Issue, and such position may be different from any views !\Ow or hereafter expressed In thiS or any other Issue Delaheld, Harvey, Tabellinc. which IS registered With the SEC as an Investment adVisor, may give adVice to Its Investment adVISOry and other customers Independently of any statements made In thiS or In any other Issue Further Information on any securrty mentioned herein IS available on request