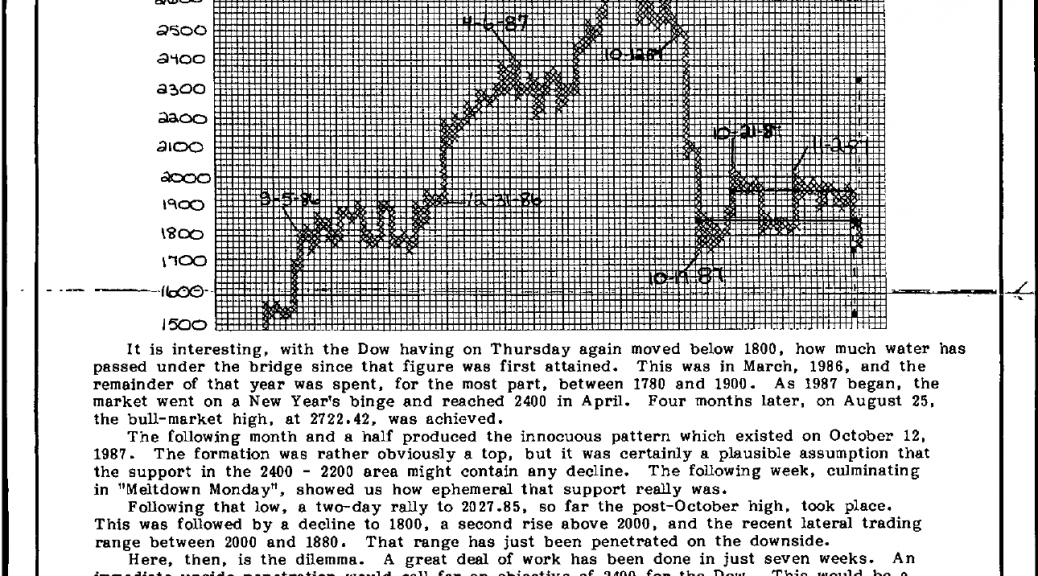 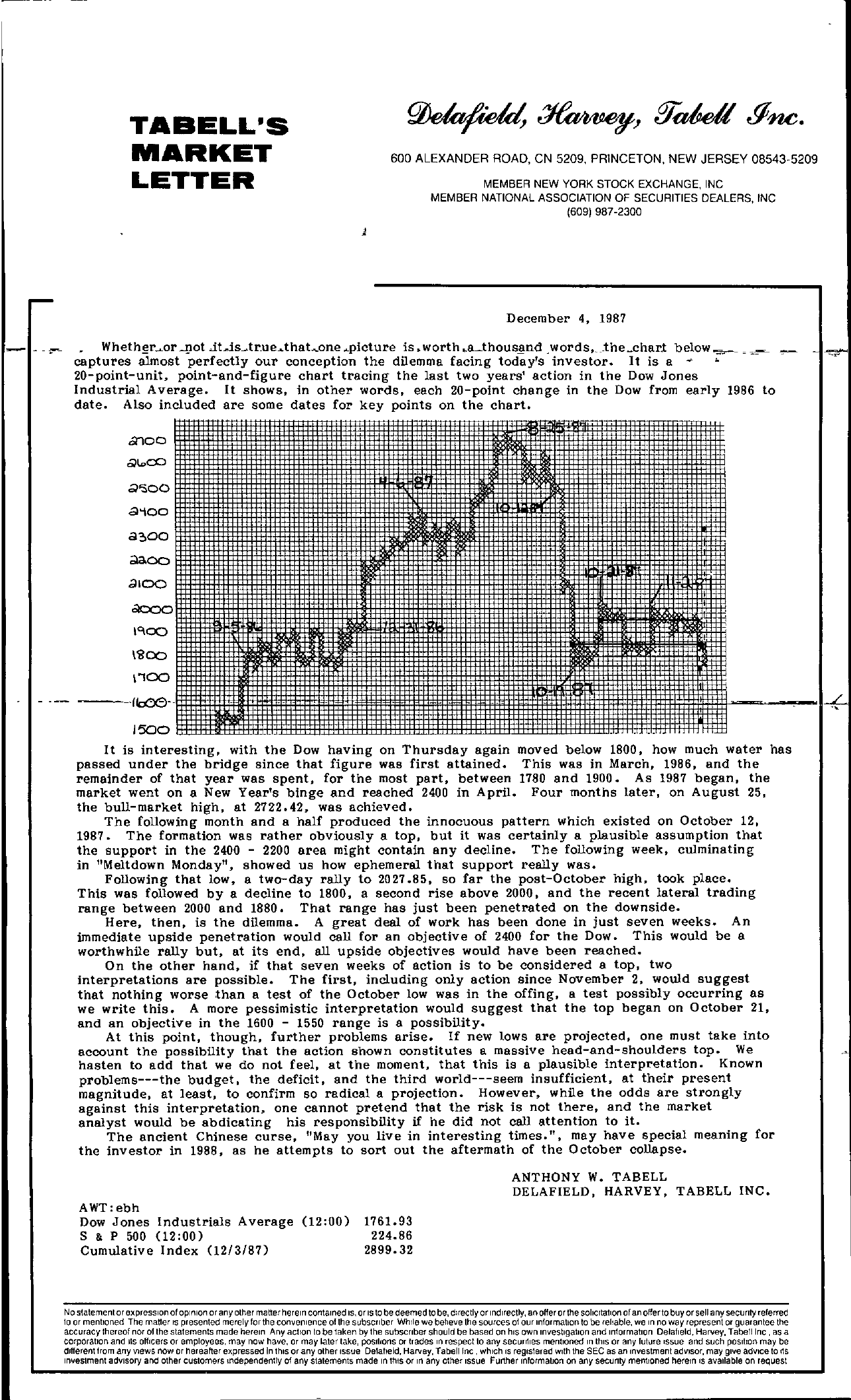 TABELL'S MARKET LETTER 600 ALEXANDER ROAD, CN 5209, PRINCETON, NEW JERSEY 085435209 MEMBER NEW YORK STOCK EXCHANGE, INC MEMBER NATIONAL ASSOCIATION OF SECURITIES DEALERS, INC (609) 9872300 1 December 4, 1987 – -;– Whethr-.-Lor -!lot .it…J.s… true-'o-that….one …picture is worth ..athous.!!nd words,thechar.t below captures almost perfectly our conception the dilemma facing today's investor. It is a 20-point-unit, point-and-figure chart tracing the last two years' action in the Dow Jones Industrial Average. It shows, in other words, each 20-point change in the Dow from early 1986 to date. Also included are some dates for key points on the chart. ,;noo O1l.o II -I I01'500 diOO a!oo 11& daoo a,oo II t''''00 \SOO ,'00 fa II III , 1500 It is interesting, with the Dow having on Thursday again moved below 1800, how much water has passed under the bridge since that figure was first attained. This was in March, 1986, and the remainder of that year was spent, for the most part, between 1780 and 1900. As 1987 began, the market went on a New Year's binge and reached 2400 in April. Four months later, on August 25, the bull-market high, at 2722.42, was achieved. The following month and a half produced the innocuous pattern which existed on October 12, 1987. The formation was rather obviously a top, but it was certainly a plausible assumption that the support in the 2400 – 2200 area might contain any decline. The following week, culminating in Meltdown Monday, showed us how ephemeral that support really was. Following that low, a two-day rally to 2027.85, so far the post-October high, took place. This was followed by a decline to 1800, a second rise above 2000, and the recent lateral trading range between 2000 and 1880. That range has just been penetrated on the downside. Here, then, is the dilemma. A great deal of work has been done in just seven weeks. An immediate upside penetration would call for an objective of 2400 for the Dow. This would be a worthwhile rally but, at its end, all upside objectives would have been reached. On the other hand, if that seven weeks of action is to be considered a top, two interpretations are possible. The first, including only action since November 2, would suggest that nothing worse than a test of the October low was in the offing, a test possibly occurring as we write this. A more pessimistic interpretation would suggest that the top began on October 21, and an objective in the 1600 – 1550 range is a possibility. At this point, though, further problems arise. If new lows are projected, one must take into account the possibility that the action shown constitutes a massive head-and-shoulders top. We hasten to add that we do not feel, at the moment. that this is a plausible interpretation. Known problems—the budget, the deficit, and the third world—seem insufficient, at their present magnitude, at least, to confirm so radical a projection. However, while the odds are strongly against this interpretation, one cannot pretend that the risk is not there, and the market analyst would be abdicating his responsibility if he did not call attention to it. The ancient Chinese curse, May you live in interesting times. n, may have special meaning for the investor in 1988, as he attempts to sort out the aftermath of the October collapse. AWTebh Dow Jones Industrials Average (1200) S & P 500 (1200) Cumulative Index (12/3/87) 1761.93 224.86 2899.32 ANTHONY W. TAB ELL DELAFIELD, HARVEY, TABELL INC. –. No statement or expression of opinion or any other matter herein contained IS, or IS to be deemed to be, directly or indirectly, an offer or the soliCitation of an offer to buy or sell any security referred 10 or mentioned The matter IS presented merely for the convenience of the subscriber While we believe the sources of our Iniormatton to be rehable, we In no way represent or guarantee the accuracy Ihereof nor of the statements made herein Any acllon to betaken by the subscriber should be based on hiS own investigation and Information Delafield, Harvey, Tabelllnc, as a corporation and Its officers or employees, may now have, or may laler take, poSitions or trades In respect to any securles mentioned In thiS or any future Issue and such pOSition may be different from any VIews now or hereafter expressed In thiS or any other Issue Delafield, Harvey, Tabellinc , which IS registered wllh Ihe SEC as an Investment adVisor, may give adVice to s Investment adVISOry and other customers Independently of any statements made In thiS or In any other Issue Further Informa\lon on any secunty mentioned herern IS available on request