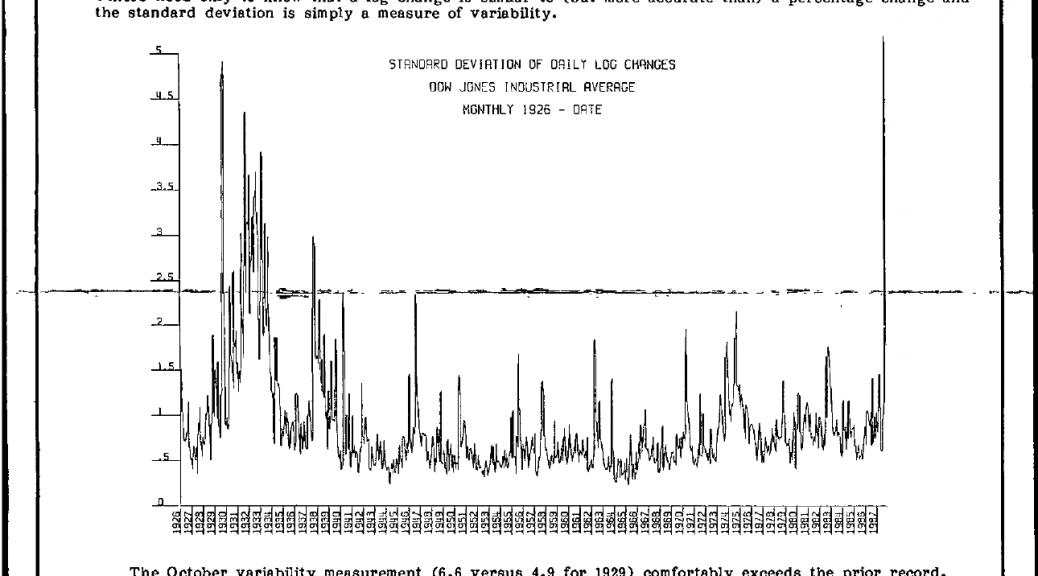 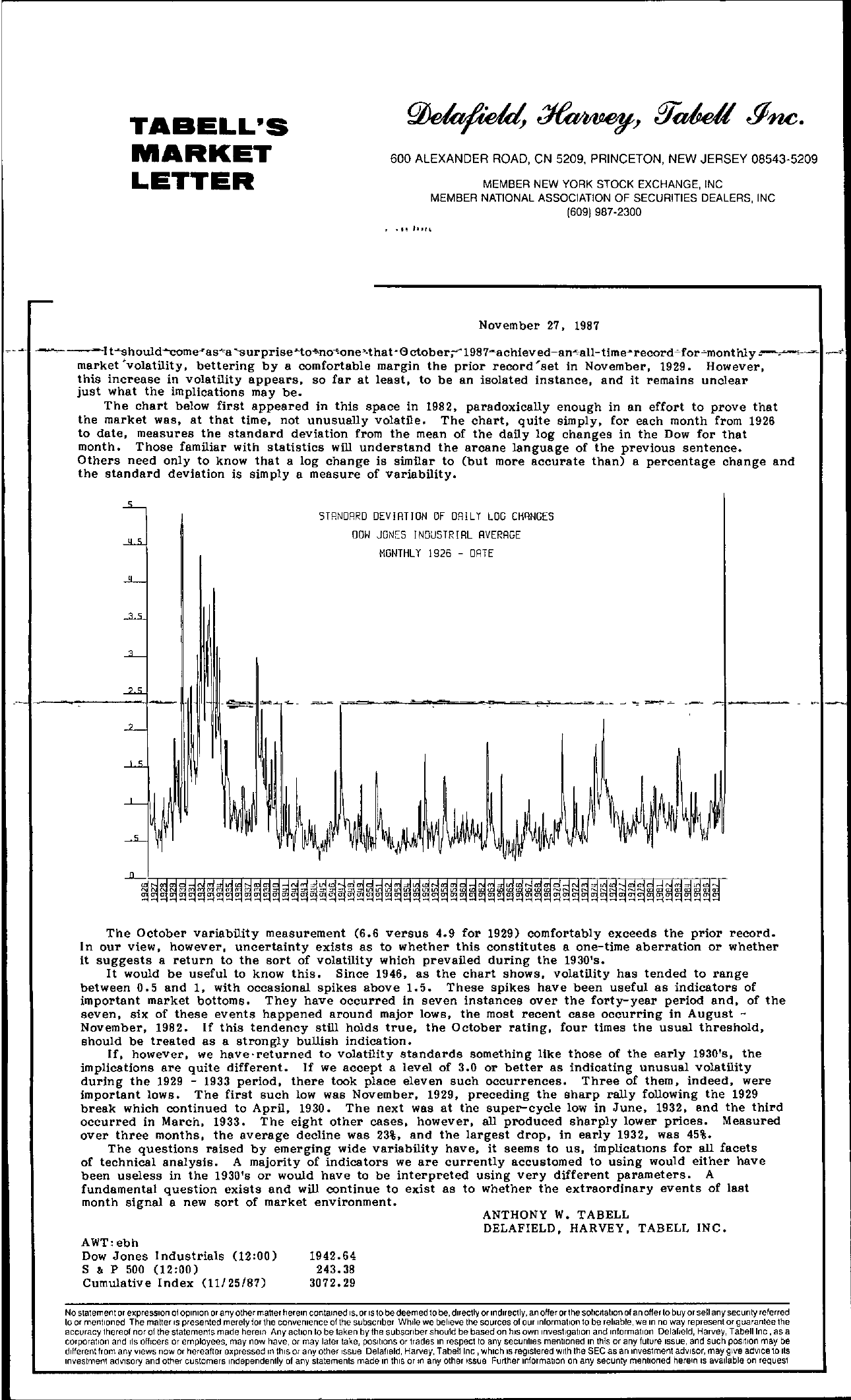 TABELL'S MARKET LETTER 600 ALEXANDER ROAD, CN 5209, PRINCETON, NEW JERSEY 08543-5209 MEMBER NEW YORK STOCK EXCHANGE, INC MEMBER NATIONAL ASSOCIATION OF SECURITIES DEALERS, INC (609) 987-2300 . /1\ November 27, 1987 – — I t—should—come..r as's …surp-rise …tono-.onethat M a ctober,…198 7–achiev ed-an.o;.all-time….record-'-for..o..monthly — .,– market volatility, bettering by a comfortable margin the prior record 'set in November, 1929. However. this increase in volatility appears. so far at least, to be an isolated instance, and it remains unclear just what the implications may be. The chart below first appeared in this space in 1982, paradoxically enough in an effort to prove that the market WBS, at that time. not unusually volatile. The chart, quite simply, for each month from 1926 to date, measures the standard deviation from the mean of the daily log changes in the Dow for that month. Those familiar with statistics will understand the arcane language of the previous sentence. Others need only to know that a log change is similar to (but more accurate than) a percentage change and the standard deviation is simply a measure of variability. STRNDARD DEVIATION OF DRILY LOG CHANGES DOW JONES INDUSTRIRL AVERAGE MONTHLY 1926 – DATE lIiVft -r-,i.—r8–'.-,–,;grrTij.—r,,,,–,ij.-,–,;ij-rTrrT.—rrrri The October variability measurement (6.6 versus 4.9 for 1929) comfortably exceeds the prior record. In our view. however. uncertainty exists as to whether this constitutes a one-time aberration or whether it suggests a return to the sort of volatility which prevailed during the 1930's. It would be useful to know this. Since 1946. as the chart shows. volatility has tended to range between 0.5 and 1, with occasional spikes above L 5. These spikes have been useful as indicators of important market bottoms. They have occurred in seven instances over the forty-year period and. of the seven. six of these events happened around major lows. the most recent case occurring in August – November. 1982. If this tendency still ho1ds true. the October rating. four times the usual threshold, should be treated as a strongly bullish indication. If. however. we have-returned to volatility standards something like those of the early 1930's, the implications are quite different. If we accept a level of 3.0 or better as indicating unusual volatility during the 1929 – 1933 period. there took place eleven such occurrences. Three of them, indeed. were important lows. The first such low was November. 1929, preceding the sharp rally following the 1929 break which continued to April. 1930. The next was at the super-cycle low in June. 1932. and the third occurred in March. 1933. The eight other cases, however, all produced sharply lower prices. Measured over three months. the average decline was 23. and the largest drop. in early 1932. was 45. The questions raised by emerging wide variability have. it seems to us. implicatlOns for all facets of technical analysis. A majority of indicators we are currently accustomed to using would either have been useless in the 1930's or would have to be interpreted using very different parameters. A fundamental question exists and will continue to exist as to whether the extraordinary events of last month signal a new sort of market environment. ANTHONY W. TABELL DELAFIELD. HARVEY. TAB ELL INC. AWTebh Dow Jones Industrials (1200) 1942.64 S & P 500 (1200) 243.38 Cumulative Index (11/25/87) 3072.29 No statement or expression of opinion or any other matter herein contained IS, or IS to be deemed to be, directly or indirectly, an oHer orthe sohcltatlon of an oHer to buy or sell any seCUrity referred 10 or menlloned The matter IS presented merely for the convenience of the subscriber While we believe the sources of our informatIOn to be reliable, we In no way represent or guarantee the accuracy thereof nor 01 the statements made herelf\ Any action to be taken by the subscriber should be based on hiS own If\vesllgallon and InformatIOn Delafield, Harvey, labellinc , as a corporation and lis oHlcers or employees, may now have, or may later take, poSitions or trades If\ respect to any securities mentioned In thIs or any future Issue, and such pOSItIOn may be different from any views now Or hereafter expressed In this or any other Issue Delafield, Harvey, labellinc , which IS registered With the SEC as an If\veslment advisor, may give advice to Its Investment advisory and other customers If\dependently of any statements made In this or In any other Issue Further If\formatlon on any secunty mentioned herein IS available on request