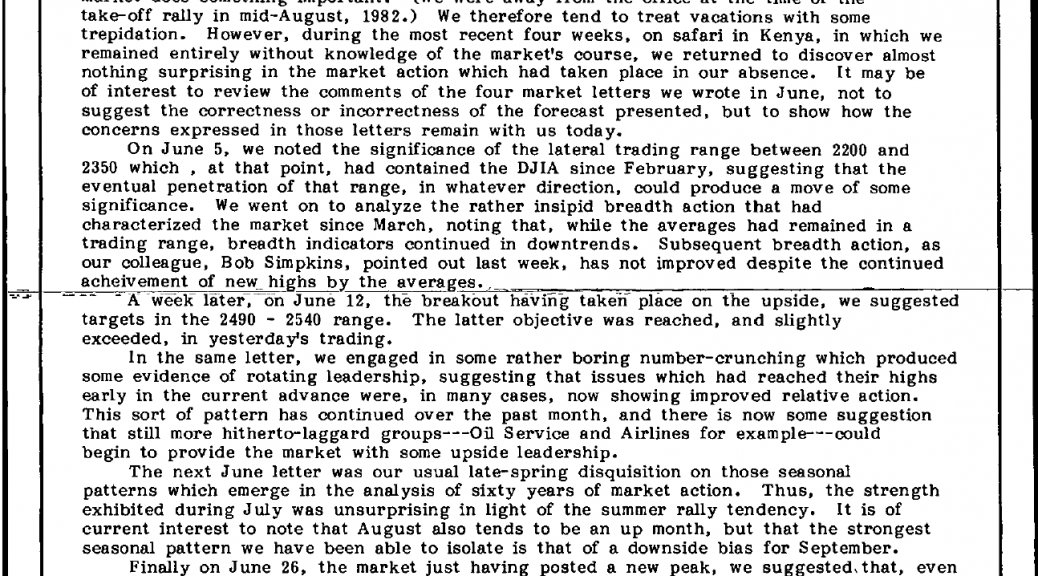 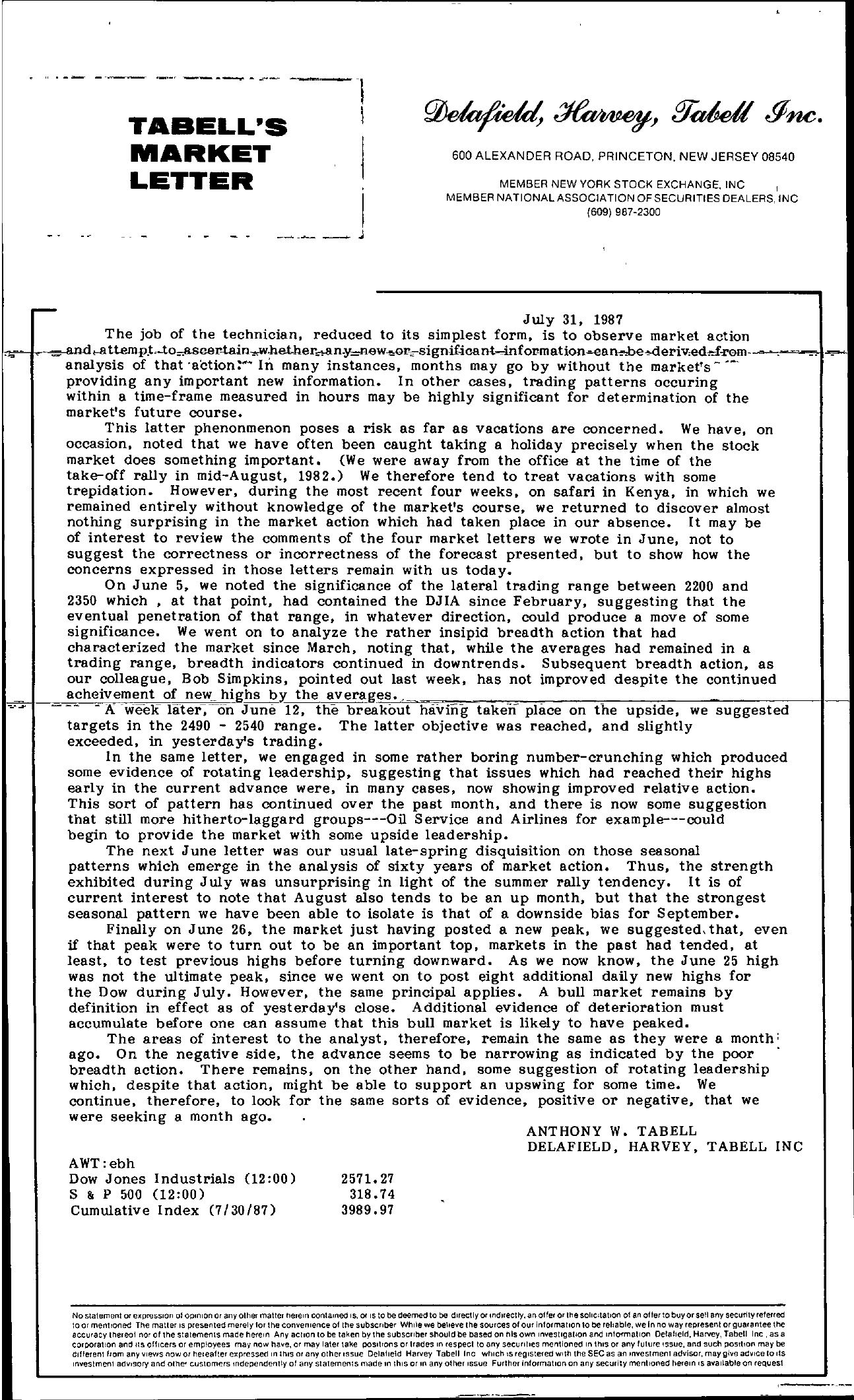 .- .- -. —-.– –I TABELL'S \ MARKET LETTER I .J 600 ALEXANDER ROAD. PRINCETON. NEW JERSEY 08540 MEMBER NEW YORK STOCK EXCHANGE. INC , MEMBER NATIONAL ASSOCIATION OF SECURITIES DEALERS, INC (609) 987-2300 July 31, 1987 The job of the technician, reduced to its simplest form, is to observe market action ,–f-,–;-,s,nd a ttemp,t-to'Sler-ta.inwhether,an-y.'w.Gr7signif-ica ntinfOl'm ation—Ja nbederiv,ed,f,,om- -..,…..,,'i analysis of that 'action- hi many instances, months may go by without the market's – -., providing any important new information. In other cases, trading patterns occuring within a time-frame measured in hours may be highly significant for determination of the market's future course. This latter phenonmenon poses a risk as far as vacations are concerned. We have, on occasion, noted that we have often been caught taking a holiday precisely when the stock market does something important. (We were away from the office at the time of the take-off rally in mid-August, 1982.) We therefore tend to treat vacations with some trepidation. However, during the most recent four weeks, on safari in Kenya, in which we remained entirely without knowledge of the market's course, we returned to discover almost nothing surprising in the market action which had taken place in our absence. It may be of interest to review the comments of the four market letters we wrote in June, not to suggest the correctness or incorrectness of the forecast presented, but to show how the concerns expressed in those letters remain with us today. On June 5, we noted the significance of the lateral trading range between 2200 and 2350 which, at that point, had contained the DJIA since February, suggesting that the eventual penetration of that range, in whatever direction, could produce a move of some significance. We went on to analyze the rather insipid breadth action that had characterized the market since March, noting that, while the averages had remained in a trading range, breadth indicators continued in downtrends. Subsequent breadth action, as our colleague, Bob Simpkins, pointed out last week, has not improved despite the continued acheivement of new highs by the averag,es'''I I- — – A weeK laler, on June 12, the breakout having take'll place on the upside, we suggested targets in the 2490 – 2540 range. The latter objective was reached, and slightly exceeded, in yesterday's trading. In the same letter, we engaged in some rather boring number-crunching which produced some evidence of rotating leadership, suggesting that issues which had reached their highs early in the current advance were, in many cases, now showing improved relative action. This sort of pattern has continued over the past month, and there is now some suggestion that still more hitherto-laggard groups—Oil Service and Airlines for example—could begin to provide the market with some upside leadership. The next June letter was our usual late-spring disquisition on those seasonal patterns which emerge in the analysis of sixty years of market action. Thus, the strength exhibited during July was unsurprising in light of the summer rally tendency. It is of current interest to note that August also tends to be an up month, but that the strongest seasonal pattern we have been able to isolate is that of a downside bias for September. Finally on June 26, the market just having posted a new peak, we suggested, that, even if that peak were to turn out to be an important top, markets in the past had tended, at least, to test previous highs before turning downward. As we now know, the June 25 high was not the ultimate peak, since we went on to post eight additional daily new highs for the Dow during July. However, the same principal applies. A bull market remains by definition in effect as of yesterday's close. Additional evidence of deterioration must accumulate before one can assume that this bull market is likely to have peaked. The areas of interest to the analyst, therefore, remain the same as they were a month ago. On the negative side, the advance seems to be narrowing as indicated by the poor breadth action. There remains, on the other hand, some suggestion of rotating leadership which, despite that action, might be able to support an upswing for some time. We continue, therefore, to look for the same sorts of evidence, positive or negative, that we were seeking a month ago. ANTHONY W. TABELL DELAFIELD, HARVEY, TABELL INC AWTebh Dow Jones Industrials (1200) 2571.27 S & P 500 (1200) 318.74 Cumulative Index (7/30/87) 3989.97 No statement or eJ(preSSlon of opinion or any other maUer herem contamed IS, Of IS to be deemed to be directly or InOlreclly. an offer Of the soliCitation 01 an oller to buyor sell any security referred loor mentioned The matter IS presented merely lor the convenience of the subSCriber While we believe the sources of our Inlormatlon to be reliable, we In no way represent Or guarantee the accuracy thereot nor 01 the statements made herein Any action to be taken by the subscriber should be based on his own Investigation and Inlormatlon Oelalletd, Harvey, labell Inc, as a corporation and itS ollicers or employees may now have, or may later tak.e poslltons or trades 10 respect to any securlhes mentioned In thiS or any future Issue, and such posItion may be different hom any views now or helealter expressed In thiS or any other Issue Delatleld Harvey Tabelt Inc which IS registered With the SEC as an Investment adviSOr, may give adVice to Its Investment adVISOry and othe' customers Independently 01 any statementS made In thiS or In any other Issue Further Information on any security mentioned herein IS available on request