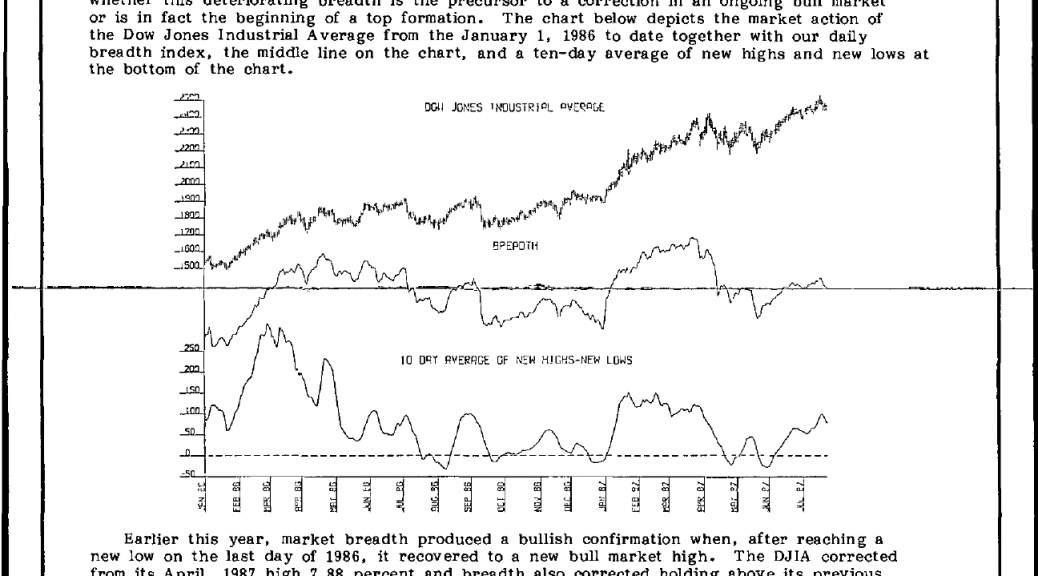 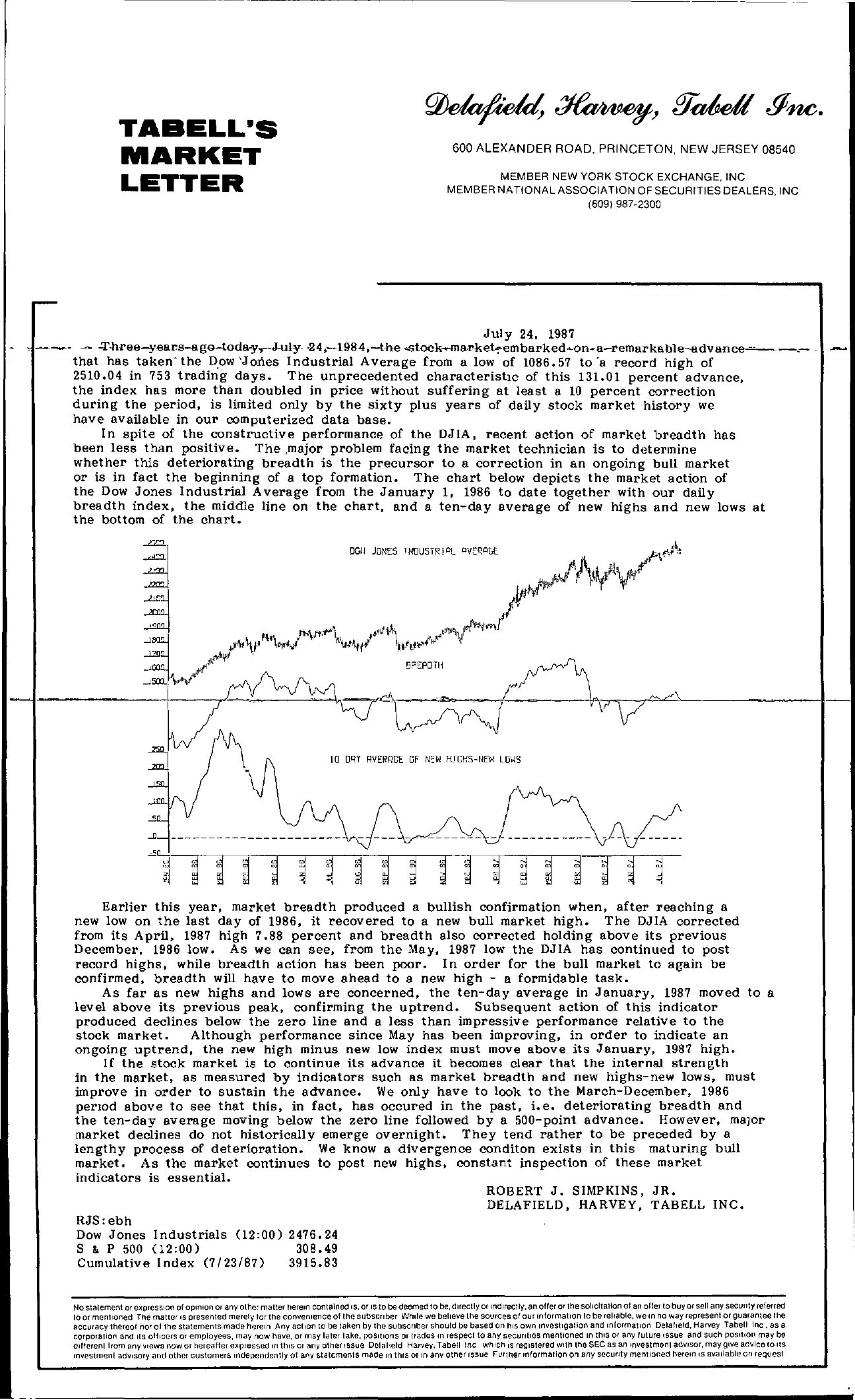 ,——————————————————————————————– TABELL'S MARKET LETTER 600 ALEXANDER ROAD, PRINCETON, NEW JERSEY 08540 MEMBER NEW YORK STOCK EXCHANGE, INC MEMBER NATIONAL ASSOCIATION OF SECURITIES DEALERS, INC (60919872300 July 24, 1987 —..- — -T-hree-year.s-agG-toda-y,–J-ul.y- -24,-1984,-t-he -.Stock-….-ma.J!-ketembarked'-on-a-remarkable-advance-,- , that has taken'the Dow 'J ones I ndustrial Average from a low of 1086.57 to 'a record high of 2510.04 in 753 trading days. The unprecedented characteristIc of this 131.01 percent advance, the index has more than doubled in price without suffering at least a 10 percent correction during the period, is limited only by the sixty plus years of daily stock market history we have available in our computerized data base. In spite of the constructive performance of the DJIA, recent action of market breadth has been less than positive. The ,major problem facing the market technician is to determine whether this deteriorating breadth is the precursor to a correction in an ongoing bull market or is in fact the beginning of a top formation. The chart below depicts the market action of the Dow Jones Industrial Average from the January I, 1986 to date together with our daily breadth index, the middle line on the chart, and a ten-day average of new highs and new lows at the bottom of the chart. 10 oqr RVERAGE OF N-W HJ GHS-NEW LOWS Earlier this year, market breadth produced a bullish confirmation when, after reaching a new low on the last day of 1986, it recovered to a new bull market high. The DJIA corrected from its April, 1987 high 7.88 percent and breadth also corrected holding above its previous December, 1986 low. As we can see, from the May, 1987 low the DJIA has continued to post record highs, while breadth action has been poor. In order for the bull market to again be confirmed, breadth will have to move ahead to a new high – a formidable task. As far as new highs and lows are concerned, the ten-day average in January, 1987 moved to a level above its previous peak, confirming the uptrend. Subsequent action of this indicator produced declines below the zero line and a less than impressive performance relative to the stock markeL Although performance since May has been improving. in order to indicate an ongoing uptrend, the new high minus new low index must move above its January, 1987 high. If the stock market is to continue its advance it becomes clear that the internal strength in the market, as measured by indicators such as market breadth and new highs-new lows, must improve in order to sustain the advance. We only have to look to the March-December, 1986 perIOd above to see that this, in fact, has occured in the past. i.e. deteriorating breadth and the ten-day average moving below the zero line followed by a 500-point advance. However, major market declines do not historically emerge overnight. They tend rather to be preceded by a lengthy process of deterioration. We know a divergence conditon exists in this maturing bull market. As the market continues to post new highs, constant inspection of these market indicators is essential. ROBERT J. SIMPKINS, JR. DELAFIELD, HARVEY, TABELL INC. RJS ebh Dow Jones Industrials (1200) 2476.24 S & P 500 (1200) 308.49 Cumulative Index (7123187) 3915.83 No statement or expression of oplmon or any olher matter herelfl contalnad IS, or IS to be deemed to be, directly or Ifldlreclly, an offer or the sohcltatlon 01 an oUer to buy Of sell any security referred 10 or mentioned The matter IS presented merety tor the convemence of the subSCriber While we believe the sources of our Information to be reliable, we In no way represent or guarantee the aCCllracy thereof nor 01 the statements made herem Any action \0 be taken by the subSCriber should be based on hiS own Investigation and mformatlon Delafield, Harvey Tabell Inc, as a corporation and Its oHlcers or employees, may now have, or may later take, positions or trades m respect to any SeCllrltlcs mentioned In thiS or any future Issue and such position may be dillerenlirom any views now or heleafter expressed m thiS or any other ISSlle Delalleld Harvey, Tabell Inc whiCh IS registered wl1h the SEC as an Investment adVisor, may give advice (0 ItS Investment adVISory and other customers Independently of any statements made m thiS or In anv other Issue Further Iflforma!lon on any seclIrlty mentIOned herem IS available on request