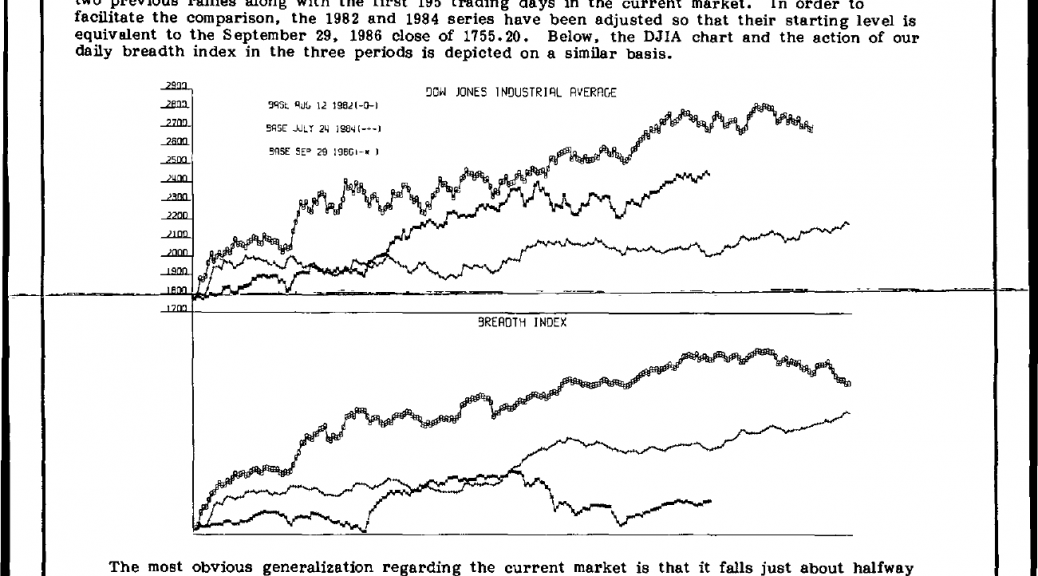 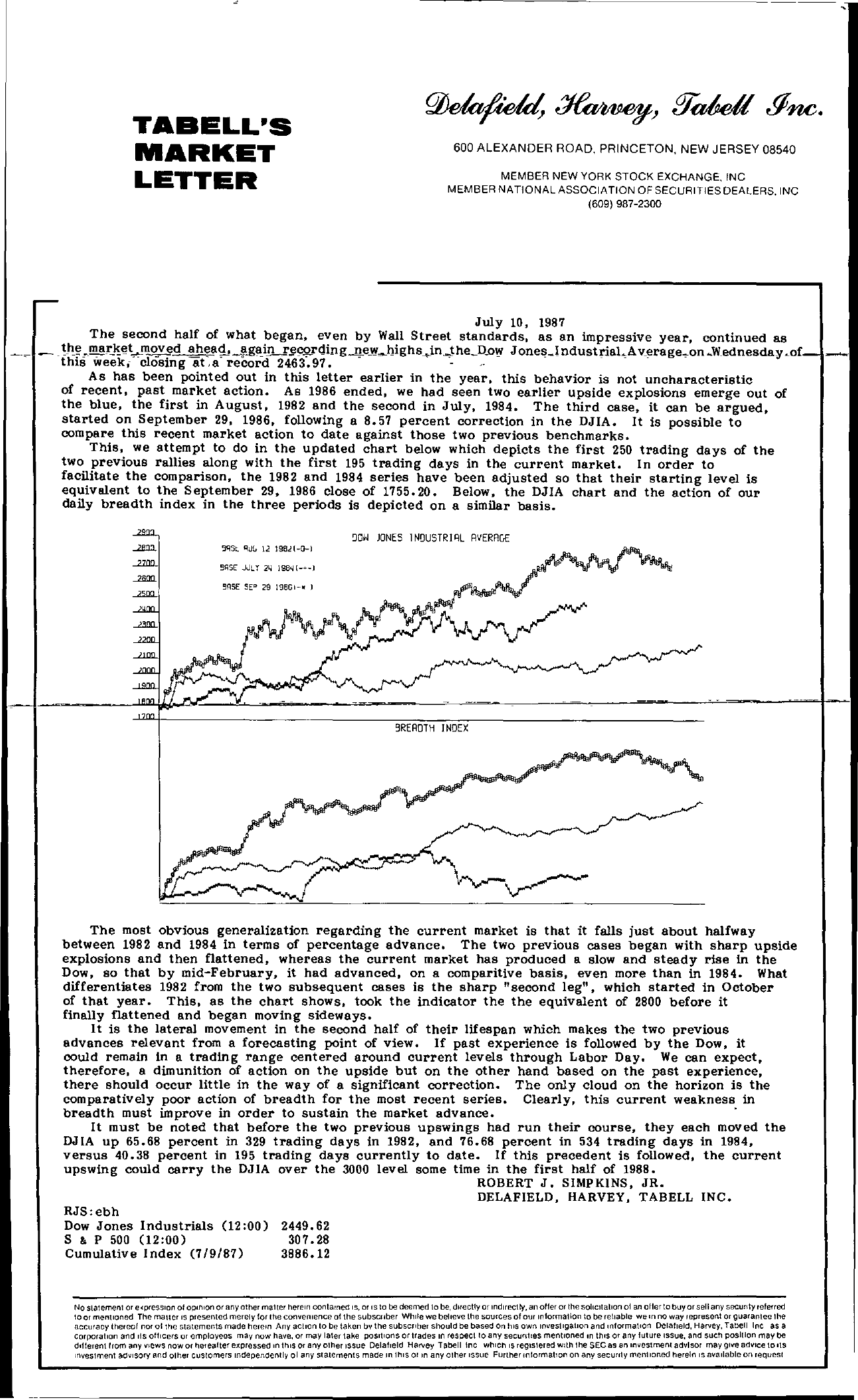 TABELL'S MARKET LETTER 600 ALEXANDER ROAD. PRINCETON. NEW JERSEY 08540 MEMBER NEW YORK STOCK EXCHANGE. INC MEMBER NATIONAL ASSOCIATION OF SECURITIES DEALERS. INC (609) 987-2300 July 10, 1987 The second half of what began, eVen by Wall Street standards, as an impressive year, continued as tll J!!.!!rJ'1Lm–!'Y!'d ahea!.JgaiiL!'!,CQr(nngJtewhighsin….theDow J onesl ndustriaLA verageon .Wednesday Lof -this week;-closingat-.a-recor-d 246f.97. – .- – – – — – As has been pointed out in this letter earlier in the year, this behavior is not uncharacteristic of recent, past market action. As 1986 ended, we had seen two earlier upside explosions emerge out of the blue, the first in August, 1982 and the second in July, 1984. The third case, it can be argued, started on September 29, 1986, following a 8.57 percent correction in the DJIA. It is possible to compare this recent market action to date against those two previous benchmarks. This, we attempt to do in the updated chart below which depicts the first 250 trading days of the two previous rallies along with the first 195 trading days in the current market. In order to facilitate the comparison, the 1982 and 1984 series have been adjusted so that their starting level is equivalent to the September 29, 1986 close of 1755.20. Below, the DJIA chart and the action of our daily breadth index in the three periods is depicted on a similar basis. – 'lASt q!l(, 12 198J(-G-) SASE JJU' 24 198,j(–1 SASE SE 29 19BGI- ) aw JONES lNDUSTRIQL AVERRGE 9REAOTH INDEX The most obvious generalization regarding the current market is that it falls just about halfway between 1982 and 1984 in terms of percentage advance. The two previous cases began with sharp upside explosions and then flattened, whereas the current market has produced a slow and steady rise in the Dow, so that by mid-February, it had advanced, on a comparitive basis, even more than in 1984. What differentiates 1982 from the two subsequent cases is the sharp second leg, which started in October of that year. This, as the chart shows, took the indicator the the equivalent of 2800 before it finally flattened and began moving sideways. It is the lateral movement in the second half of their lifespan which makes the two previous advances relevant from a forecasting point of view. If past experience is followed by the Dow, it could remain In a trading range centered around current levels through Labor Day. We can expect, therefore. a dimunition of action on the upside but on the other hand based on the past experience, there should occur little in the way of a significant correction. The only cloud on the horizon is the comparatively poor action of breadth for the most recent series. Clearly, this current weakness in breadth must improve in order to sustain the market advance. . It must be noted that before the two previous upswings had run their course, they each moved the DJIA up 65.68 percent in 329 trading days in 1982, and 76.68 percent in 534 trading days in 1984, versus 40.38 percent in 195 trading days currently to date. If this precedent is followed, the current upswing could carry the DJIA over the 3000 level some time in the first half of 1988. ROBERT J. SIMPKINS, JR. DELAFIELD, HARVEY, TABELL INC. RJSebh Dow Jones Industrials (1200) 2449.62 S & P 500 (1200) 307.28 Cumulative Index (7/9/87) 3886.12 No statement or e (presSion of opmlon or any other malter herein contameO IS, or IS 10 be deemed 10 be, directly or mdlreclty, an oller or the sollcilation at an otter to buyor sell any security reterred 1001 menlloned The mailer IS presenled merety forlhe convenience of Ihe subscriber While we betleve Ihe sources at our mformaHon to be rellabte wem no way represenl or guaranlee Ihe accuracy thereof nor 01 the statements made herem Any action to be taken bv the SUbscliber should be based on hiS own mvesllgallon and mformatlon Delafield, Harvey, Tabelt Inc as a Corporal Ion and lIs officers or employees may now have, or may later take pOSlllons or trades m res peel to any secunlles mentioned In Ihls Ot any future Issue, and such position may be d.llerenll/om any views now or helealter expressed mlhlS or any olher Issue Delafield Harvey labell Inc whiCh IS reglslered With the SECas an Investment advisor may give adVice 101\S mvestmenl adVisory and olher customers Independently 01 any statements made In thiS 01 In any olher Issue FUrther mlormallon on any secuflty mentIOned herein IS available on request