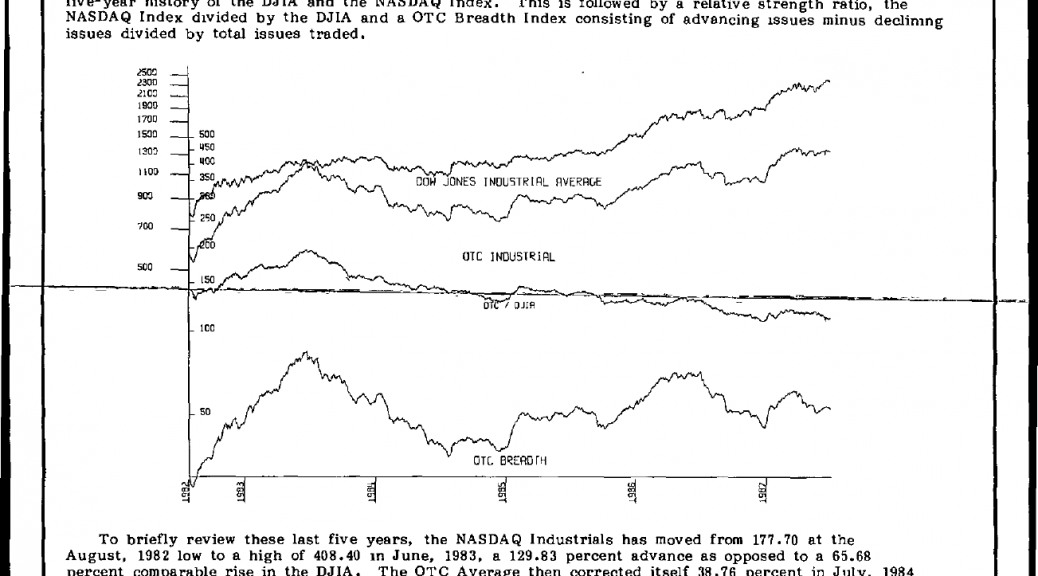 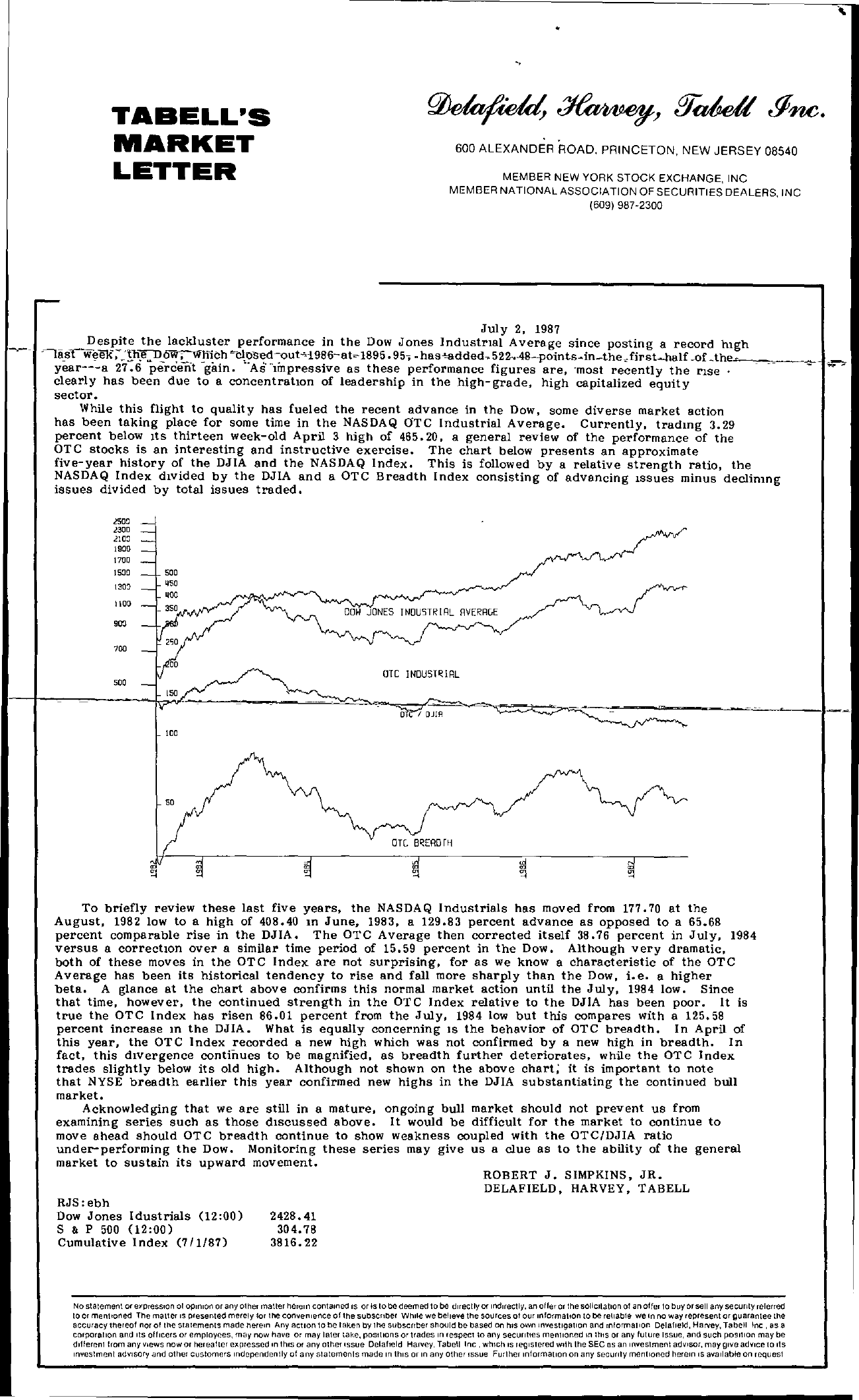 TABELL'S MARKET LETTER 600 ALEXANDER ROAD, PRINCETON, NEW JERSEY 08540 MEMBER NEW YORK STOCK EXCHANGE, INC MEMBER NATIONAL ASSOCIATION OF SECURITIES DEALERS, INC (609) 987-2300 July 2. 1987 Despite the lackluster performance in the Dow Jones Industrml Average since posting a record hIgh percent88t weeJ;-!.ti,e DoW-iWliich -clolled-oub1986-ak1895.95, . h.sdded, 522-.,48-points.in-thefirst-half .of -,no'—f,, year—a 27.6 -gain. Ashlmpressive as these performance figures are, 'most recently the rIse' clearly has been due to a concentratIon of leadership in the high-grade, high capitalized equity sector. While this flight to quaUt y has fueled the recent advance in the Dow, some diverse market action has been taking place for some time in the NASDAQ aTC Industrial Average. Currently. tradmg 3.29 percent below Its thirteen week-old April 3 high of 465.20. a general review of the performance of the OT C stocks is an interesting and instructive exercise. The chart below presents an approximate five-year history of the DJIA and the NASDAQ Index. This is followed by a relative strength ratio. the NASDAQ Index dIvided by the DJIA and a OTC Breadth Index consisting of advancing lssues minus declinmg issues divided by total issues traded. 00 .!300 210) 1900 t700 I' SOD 1311' 4SO 400 1100 gIlD INDUSTRIRL RVERAGE 700 SOD 150 100 OTC INDU5TI;!IRL OJJR SO To briefly review these last five years, the NASDAQ Industrials has moved from 177.70 at the August. 1982 low to a high of 408.40 m June. 1983. a 129.83 percent advance as opposed to a 65.68 percent comparable rise in the DJIA. The OTC Average then corrected itself 38.76 percent in July. 1984 versus a correctIon over a similar time period of 15.59 percent in the Dow. Although very dramatic, both of these moves in the OTC Index are not surprising. for as we know a characteristic of the OTe Average has been its historical tendency to rise and fall more sharply than the Dow, i.e. a higher beta. A glance at the chart above confirms this normal market action until the July. 1984 low. Since that time, however, the continued strength in the OTC Index relative to the DJIA has been poor. It is true the OTC Index has risen 86.01 percent from the July. 1984 low but this compares with a 125.58 percent increase 10 the DJIA. What is equally concerning IS the behavior of OTC breadth. In April of this year. the OTC Index recorded a new high which was not confirmed by a new high in breadth. In fact, this dIvergence continues to be magnified. as breadth further deteriorates. while the OTC Index trades slightly below its old high. Although not shown on the above chart; it is important to note that NYSE breadth earlier this year confirmed new highs in the DJIA substantiating the continued bull market. Acknowledging that we are still in a mature. ongoing bull market should not prevent us from examining series such as those dIscussed above. It would be difficult for the market to continue to move ahead should OTC breadth continue to show weakness coupled with the OTC/DJIA ratio under-performing the Dow. Monitoring these series may give us a clue as to the ability of the general market to sustain its upward movement. ROBERT J. SIMPKINS. JR. DELAFIELD. HARVEY. TABELL RJSebh Dow Jones IdustrialS (1200) 2428.41 S & P 500 (1200) 304.78 Cumulative Index (7/1/87) 3816.22 No statement or eypreSSlon 01 opinion or any other matter hem.)ln contained IS or!s to be deemed to be directly Of indirectly, an offer or the solicitation of an offer to buy or self any secunty re!erred to or menltoned The matter IS presented merely for the convenience of the subscl1ber While we belreve the sources of our rnformallon to be reliable we In no way represent or guaramee the accuracy thereof nor of the statements made herein Any aCllon to be taken by the sUbSCriber should be based on hiS own inVestigation and Information Delafield, Harvey, Tabell Inc, as a corpOration and ItS officers or employees, may now have Or may later take, posllions or trades In respect 10 any secUrities mentioned In thiS or any future Issue, and such position may be dlfferentlrom any Views now or hereaher expressed In thiS or any other Issue Oelafleld Harvey, Tabell fnc ,WhiCh IS r'lISlered With the SEC as an IIlvestment adVisor, may give advice 10 Its InYestment adVisory and other customers Independently of any statemenlS made In Ihls or In any other ISSue Furlher Information on any Secuflty mentioned herein IS available on fCQuest