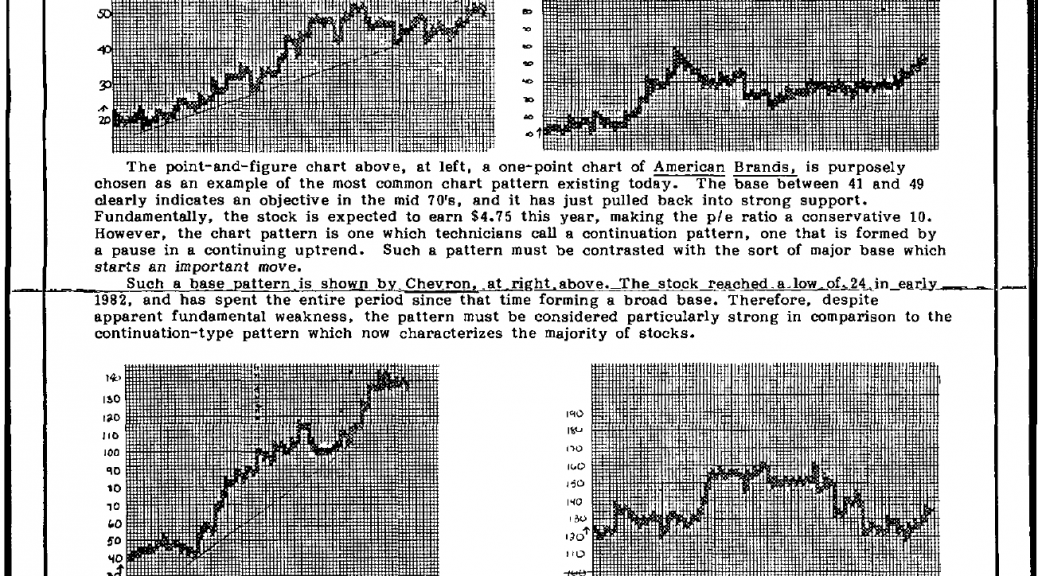 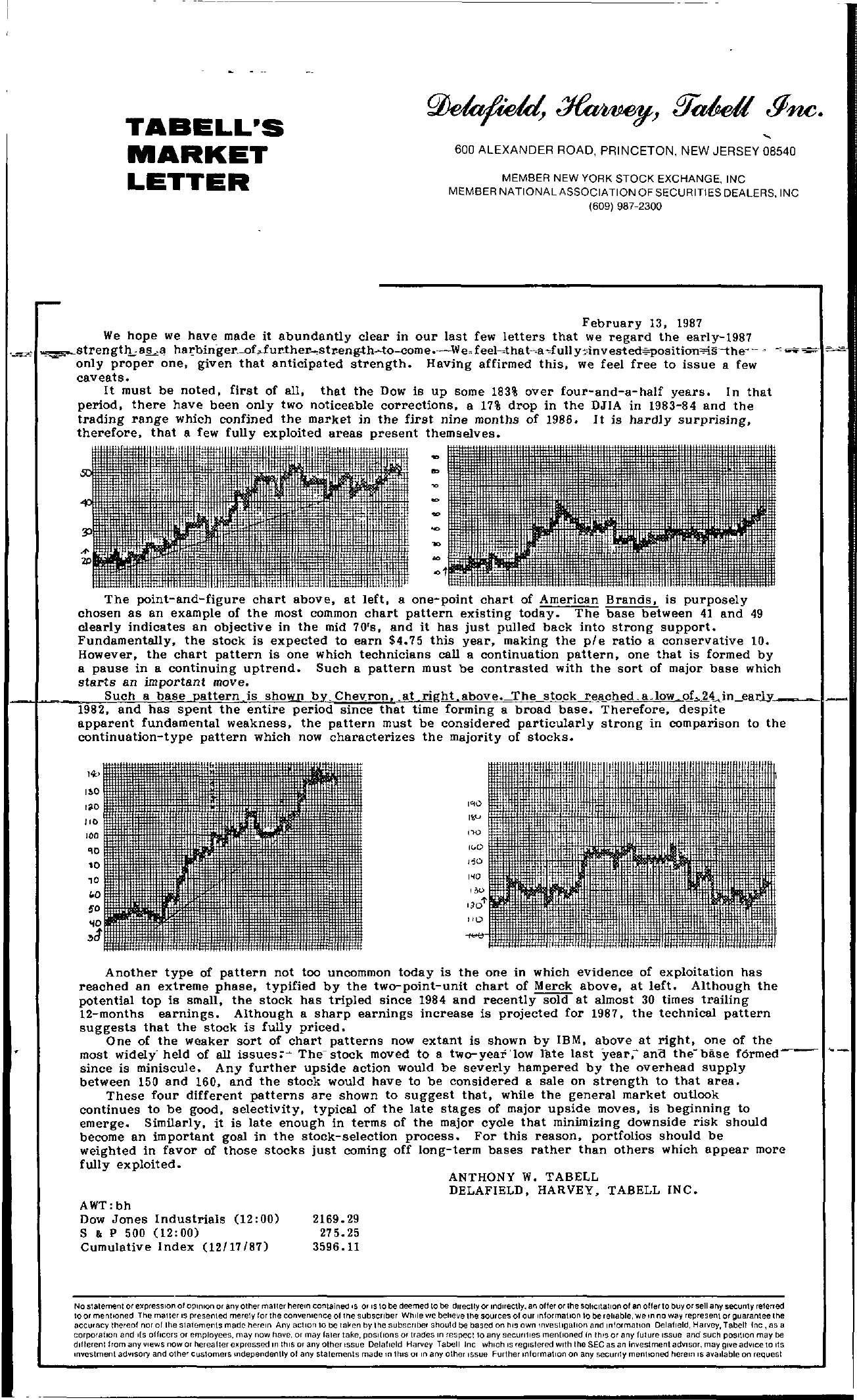 TABELL'S MARKET LETTER 600 ALEXANDER ROAD, PRINCETON, NEW JERSEY 08540 MEMBER NEW YORK STOCK EXCHANGE, INC MEMBER NATIONAL ASSOCIATION OF SECURITIES DEALERS, INC (609) 987-2300 February 13, 1987 We hope we have made it abundantly clear in our last few letters that We regard the early-1987 . strengtll. aSA! h8r;binger.ofur.ther–str-eng.th……to-come.—W-e feel'tha t–8 full y-investedposition;is–the'- -0 only proper one, given that anticipated strength. Having affirmed this, we feel free to issue a few caveats. It must be noted, first of all, that the Dow is up some 183 over four-and-a-half years. In that period, there have been only two noticeable corrections, a 17 drop in the DJIA in 1983-84 and the trading range which confined the market in the first nine months of 1986.. It is hardly surprising, therefore, that a few fully exploited areas present themselves. The point-and-figure chart above, at left, a one-point chart of American Brands, is purposely chosen 8S an example of the most common chart pattern existing today. The base between 41 and 49 clearly indicates an objective in the mid 70's, and it has just pulled back into strong support. Fundamentally, the stock is expected to earn 4.75 this year. making the pIe ratio a conservative 10. However, the chart pattern is one which technicians call a continuation pattern, one that is formed by a pause in a continuing uptrend. Such a pattern must be contrasted with the sort of major base which starts an important move. Such a base attern is shown b Chevron at right. above. The stock reBched .alow of.. 24jnearly1 1982. and has spent the entire period since that time forming a broad base. Therefore. despite apparent fundamental weakness, the pattern must be considered particularly strong in comparison to the continuation-type pattern which now characterizes the majority of stocks. Another type of pattern not too uncommon today is the one in which evidence of exploitation has reached an extreme phase, typified by the two-point-unit chart of Merck above, at left. Although the potential top ia small, the stock has tripled since 1984 and recently sold at almost 30 times trailing 12-months earnings. Although a sharp earnings increase is projected for 1987. the technical pattern suggests that the stock is fully priced. One of the weaker sort of chart patterns now extant is shown by IBM, above at right, one of the most widely' held of all issues; The-stock moved to a two-year'low late last year, ana the-base f6rmed— since is miniscule. Any further upside action would be severly hampered by the overhead supply between 150 and 160, and the stock would have to be considered a sale on strength to that area. These four different patterns are shown to suggest that, while the general market outlook continues to be good, selectivity, typical of the late stages of major upside moves, is beginning to emerge. Similarly. it is late enough in terms of the major cycle that minimizing downside risk should become an important goal in the stock-selection process. For this reason, portfolios should be weighted in favor of those stocks just corning off long-term bases rather than others which appear more fully exploited. ANTHONY W. TABELL DELAFIELD, HARVEY, TABELL INC. AWTbh Dow Jones Industrials (12 00) 2169.29 S & P 500 (1200) 275.25 Cumulative Index (12/17/87) 3596.11 No statement or expression of opinion or any other maHer herein contained IS or IS to be deemed to be dlrecllyor Indirectly, an offer or the Solicitation of an offer to buy or sell any secunty referred toor mentIOned The maHer IS presented merely for the convenience of the subscriber While we believe the sources of our information to be reliable, wetn no way represent or guarantee the accuracy thereof nor of the Stat6ments made herem Any action to be !alten by the subSCriber should be based on hiS own investigation and InformatIOn Delafield, Harvey, Tabell Inc, as a corporal Ion and liS ollicers or employees, may now have, or may fater take, pOSitionS or trades In respect to any securities mentioned In thiS or any future Issue and such pOSition may be dlfleren\ from any views nowor hereafter expressed In thiS or any other Issue Delafield Harvey Tabell Inc which IS registered With the SEC as an Investment adVISor, may glveadvlcelo ItS InVestment adVISOry and olhe' customers IndependenUy of any statements made In thiS or m any other Issue Further Information on any security menhoned herein IS aVlIlable on reQuest