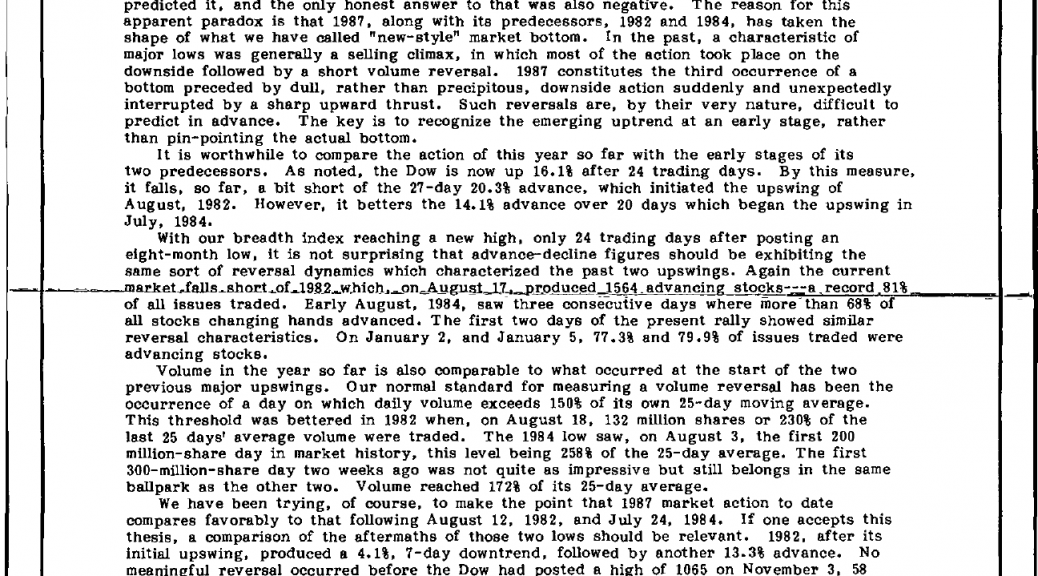 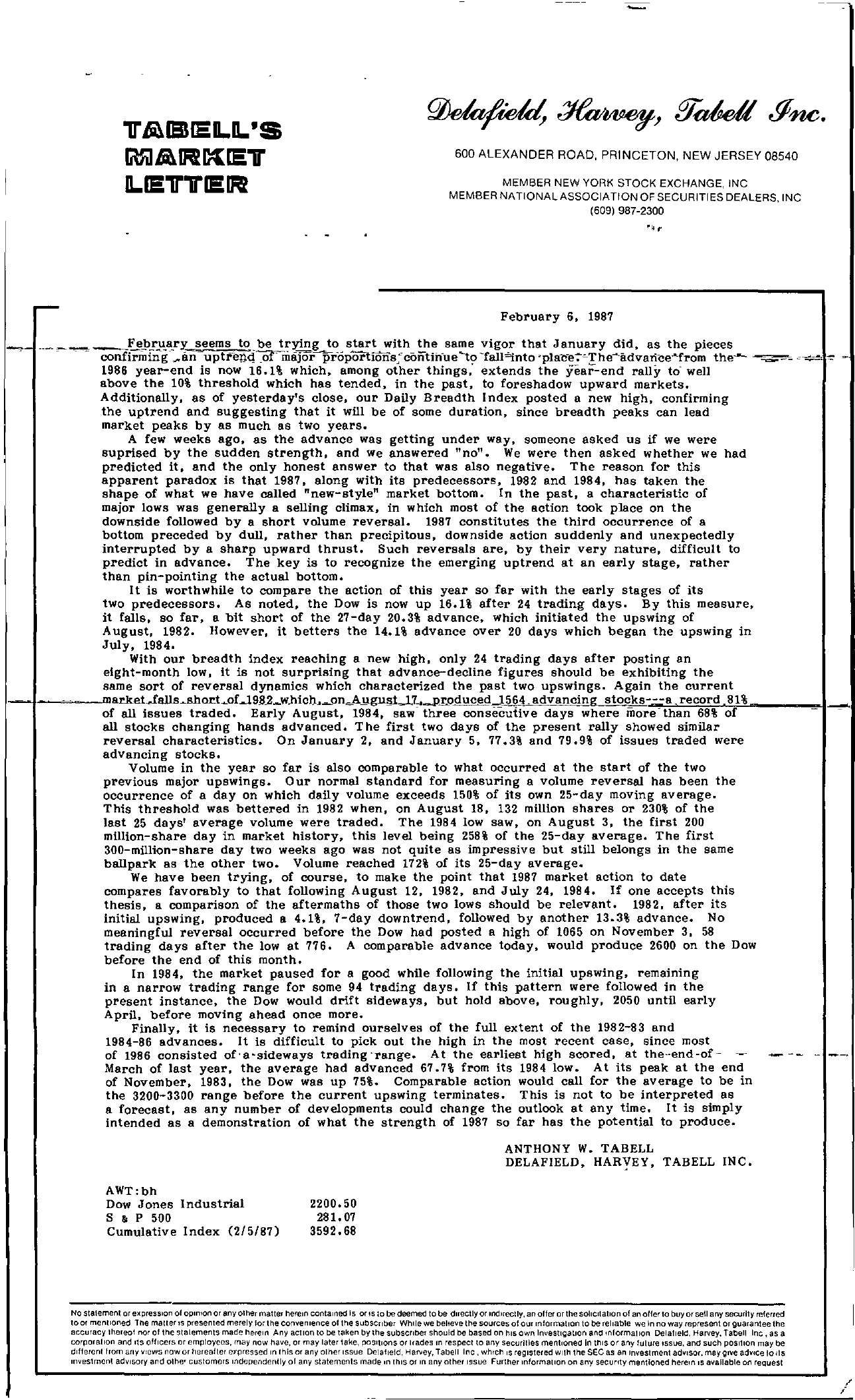 – – —– v IBUSB.B.'5 IRlC;;IEV B.IEVVIEIRl 600 ALEXANDER ROAD, PRI NCETON, NEW JERSEY 08540 MEMBER NEW YORK STOCK EXCHANGE, INC MEMBER NATIONAL ASSOCIATION OF SECURITIES DEALERS, INC (609) 987-2300 – February 6. 1987 I –,- .P.!E.ary seems to be trying to start with the same vigor that January did. as the pieces —- – – – confirming- ….. o.n uptrendcl-niajorproporUonscontinuet -fall-into pla(!lr-!,he-'advance'from the– ! 1986 year-end is now 16.1 which, among other things, extends the year-end rally to well above the 10 threshold which has tended in the past, to foreshadow upward markets. Additionally. as of yesterday's close. our Daily Breadth Index posted a new high. confirming the uptrend and suggesting that it will be of some duration, since breadth peaks can lead market peaks by 8S much 88 two years. A few weeks ago. as the advance was getting under way, someone asked us if we were suprised by the sudden strength, and We answered no. We were then asked whether we had predicted it, and the only honest answer to that was also negative. The reason for this apparent paradox is that 1987. along with its predecessors. 1982 and 1984. has taken the shape of what we have called new-style market bottom. In the past, a characteristic of major lows was generally a selling climax, in which most of the action took place on the downside followed by 8 short vo1ume reversal. 1987 constitutes the third occurrence of a bottom preceded by dull. rather than precipitous. downside action suddenly and unexpectedly interrupted by 8 sharp upward thrust. Such reversals are. by their very nature. difficult to predict in advance. The key is to recognize the emerging uptrend at an early stage, rather than pin-pointing the actual bottom. It is worthwhile to compare the action of this year so far with the early stages of its two predecessors. As noted, the Dow is now up 16.1 after 24 trading days. By this measure, it falls. so far. a bit short of the 27-day 20.3 advance. which initiated the upswing of August, 1982. However, it betters the 14.1 advance over 20 days which began the upswing in July. 1984. With our breadth index reaching a new high, only 24 trading days after posting an eight-month low. it is not surprising that advance-decline figures should be exhibiting the same sort of reversal dynamics which characterized the past two upswings. Again the current 1–,I-,maueLfa11aabLof1982w.hich.on.As1U-produced 1564 advancing stocks—a record 81 of all issues traded. Early August, 1984, saw three consecutive days where more than 68 of all stocks changing hands advanced. The first two days of the present rally showed similar reversal characteristics. On January 2, and January 5, 77.3 and 79.9 of issues traded were advancing stocks. Volume in the year so far is also comparable to what occurred at the start of the two previous major upswings. Our normal standard for measuring a volume reversal has been the occurrence of a day on which daily volume exceeds 150 of its own 25-day moving average. This threshold was bettered in 1982 when. on August 18. 132 million shares or 230 of the last 25 days' average volume were traded. The 1984 low saw, on August 3, the first 200 million-share day in market history. this level being 258 of the 25-day average. The first 300-million-share day two weeks ago was not quite as impressive but still belongs in the same ballpark as the other two. Volume reached 172 of its 25-day average. We have been trying, of course. to make the point that 1987 market action to date compares favorably to that following August 12. 1982. and July 24. 1984. If one accepts this thesis. a comparison of the aftermaths of those two lows should be relevant. 1982. after its initial upswing. produced a 4.1. 7-day downtrend. followed by another 13.3 advance. No meaningful reversal occurred before the Dow had posted a high of 1065 on November 3. 58 trading days after the low at 776. A comparable advance today. would produce 2600 on the Dow before the end of this month. In 1984. the market paused for a good while following the initial upswing. remaining in a narrow trading range for some 94 trading days. If this pattern were followed in the present instance, the Dow would drift sideways, but hold above, roughly. 2050 until early April. before moving ahead once more. Finally. it is necessary to remind ourselves of the full extent of the 1982-83 and 1984-86 advances. It is difficult to pick out the high in the most recent case, since most of 1986 consisted of' asideways trading -range. At the earliest high scored. at the–end -of- March of last year. the average had advanced 67.7 from its 1984 low. At its peak at the end of November, 1983. the Dow was up 75. Comparable action would call for the average to be in the 3200-3300 range before the current upswing terminates. This is not to be interpreted as a forecast. as any number of developments could change the outlook at any time. It is simply intended as a demonstration of what the strength of 1987 so far has the potential to produce. ANTHONY W. TAB ELL DELAFIELD. HARYEY. TAB ELL INC. AWTbh Dow Jones Industrial S & P 500 Cumulative Index (215187) 2200.50 281.07 3592.68 NO statement or expression of opinion or any other matter herein contamed Is or IS 10 be deemed to be directly or mdlrectly, an offer or the soliCitation of an oller to buy orsetl any security referred toor montloned The matter IS presented merely iorthe convenience of the subSCriber While we beheve the sources of our mformatlon tobe reliable we in no way represent or guarantee the accuracy thereof nor of the statements made herem Any actIOn to be taken by the subsctlber should be based on hiS own Investigation and information Detafleld, Harvey, Tabell Inc, as a corporation and Its officers or employees, may now havo, or may tater take, positions or trades m respect to any securltlos mentioned In thiS or any future Issue, and such position may be dl1iel(lnt from any views nowor hereafter epressed m this or any other Issue Delafield, Harvey, Tabel! Inc, which IS registered With the SEC as an Invest mont adVisor, may give adVice lolls Investment adVisory and olhe' customers mdependently of any statements made In thiS Of m any other Issue Further Information on any security men\!oned herem IS available on request ,-/