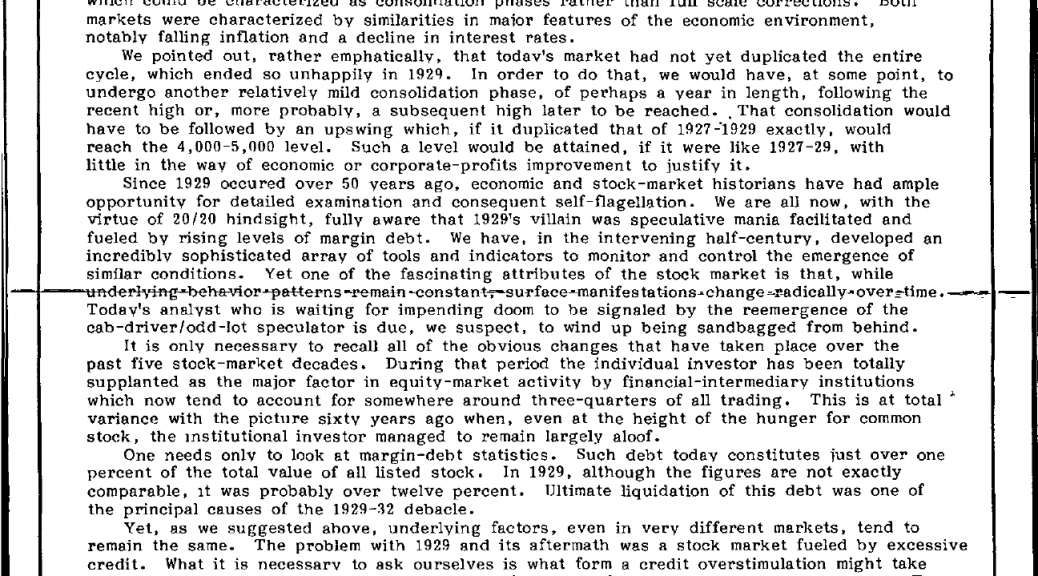 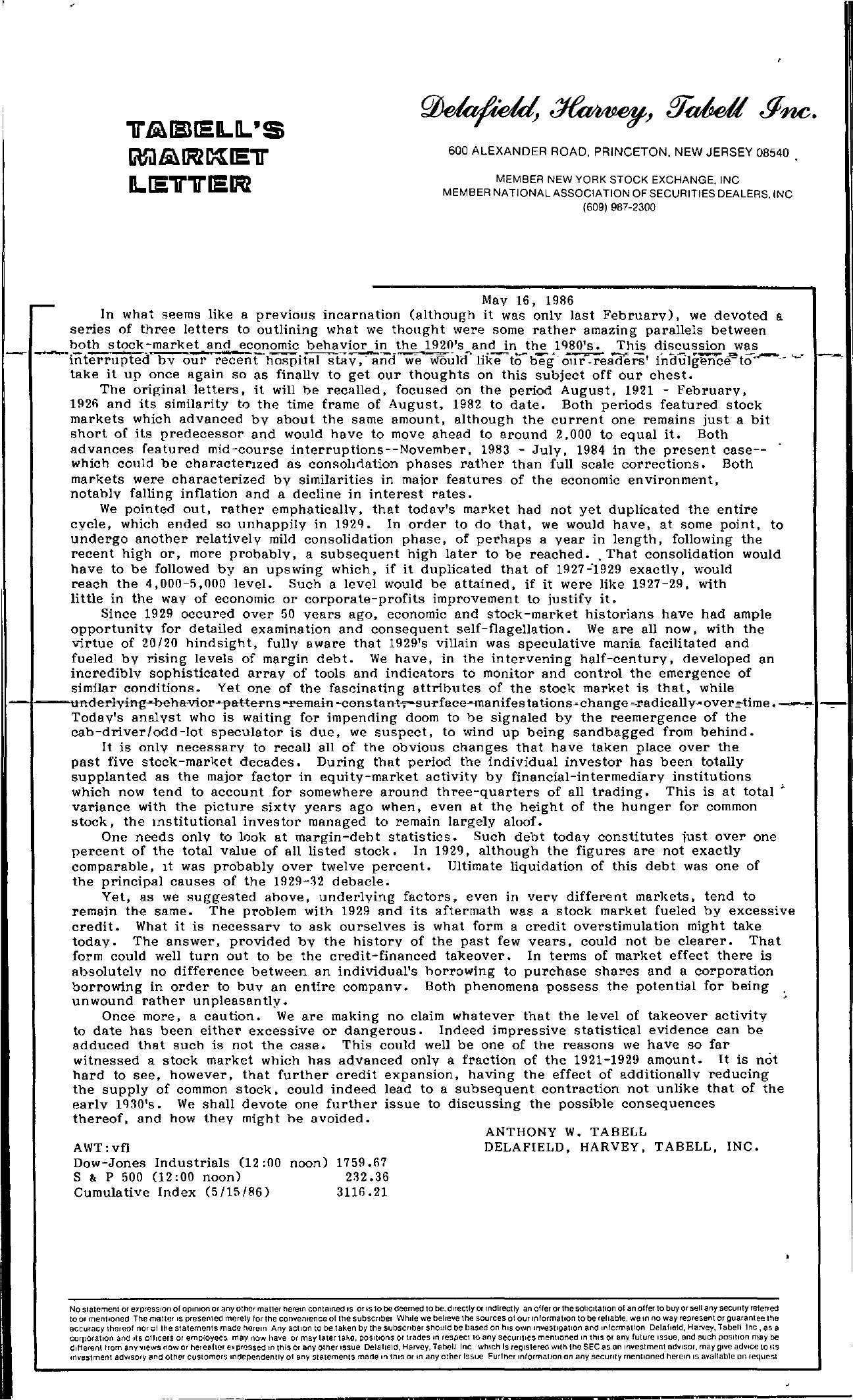 11 ISUE Il..Il.. ' S (jl1j IRl IEII 1l..IEIIIIlEIRl 600 ALEXANDER ROAD, PRINCETON, NEW JERSEY 08540 MEMBER NEW YORK STOCK EXCHANGE, INC MEMBER NATIONAL ASSOCIATION OF SECURITIES DEALERS, INC (609) 987-2300 r– May 16, 1986 In what seems like a previous incarnation (although it was only last February), we devoted a series of three letters to outlining what we thought were some rather amazing parallels between both stock-market and economic behavior in the 1920's and in the lQ80's. This discussion was ——interrupteir bv our recent h'iJ'SPiWStliV7and we woum.. liketobeg- oadersl fnaulgto– — —,. take it up once again so as finally to get our thoughts on this subject off our chest. The original letters, it will 1)e recalled, focused on the period August, 1921 – February, 192fi and its similarity to the time frame of August, 1982 to date. Both periods featured stock markets which advanced by about the same amount, although the current one remains just a bit short of its predecessor and would have to move ahead to around 2,000 to equal it. Both advances featured mid-course interruptions–Novemher, 1983 – July, 1984 in the present case– which could be characterIzed as conohriation phases rather than full scale corrections. Both markets were characterized by similarities in maior features of the economic environment, notahly falling inflation and a decline in interest rates. We pointed out, rather emphatically, that todav's market had not yet duplicated the entire cycle, which ended so unhappily in 192Q. In order to do that, we would have, at some point, to undergo another relatively mild consolidation phase, of perhaps a year in length, following the recent high or, more probably, a subsequent high later to be reached .. That consolidation would have to be followed by an upswing which, if it duplicated that of 1927'1929 exactly, would reach the 4,000-5,000 level. Such a level would be attained, if it were like 1927-29, with little in the way of economic or corporate-profits improvement to justify it. Since 1929 occured over 50 years ago, economic and stock-market historians have had ample opportunity for detailed examination and consequent self-flagellation. We are all now, with the virtue of 20/20 hindsight, fully aware that 1929's villain was speculative mania facilitated and fueled by rising levels of margin debt. We have, in the intervening half-century, developed an incredibly sophisticated array of tools and indiclltors to monitor and control the emergence of similar conditions. Yet one of the fascinating attributes of the stock market is that, while II–f—tlfid-erl-yin-g-..z.beh&vior—pa-tt-erns-remain-censtant-;-su-rface….manifestations-'change-'-vadically-Aovertime. — Today's analyst who is waiting for impenriing doom to be signaled by the reemergence of the cab-driver/odd-lot speculator is due, we suspect, to wind up being sandbagged from behind. It is only necessary to recall all of the obvious changes that have taken place over the past five stock-marlet decades. During that period the individual investor has been totally supplanted as the major factor in equity-market activity by financial-intermediary institutions which now tend to account for somewhere around three-quarters of all trading. This is at total variance with the picture sixty yellrs ago when, even at the height of the hunger for common stock, the Institutional investor managed to remain largely aloof. One needs only to look at margin-deht statistics. Such deht today constitutes iust over one percent of the total value of all listed stock. In 1929, although the figures are not exactly comparable, It was probably over twelve percent. IJItimate liquidation of this debt was one of the principal causes of the 1929-2 debacle, Yet, as we suggested ahove, underlying factors, even in very different markets, tend to remain the same. The problem with 1929 and its aftermath was a stock market fueled by excessive credit. What it is necessarv to ask ourselves is what form a credit overstimulation might take today. The answer, provided by the history of the past few years, could not be clearer. That form could well turn out to be the credit-financed takeover. In terms of market effect there is absolutely no difference between an individual's horrowing to purchase shares and a corporation borrowing in order to buy an entire company. Both phenomena possess the potential for being unwound rather unpleasantly. Once more, a caution. We are making no claim whatever that the level of takeover activity to date has been either excessive or dangerous. Indeed impressive statistical evidence can be adduced that such is not the case. This could well be one of the reasons we have so far witnessed a stock market which has advanced only a fraction of the 1921-1929 amount. It is not hard to see, however, that further credit expansion, having the effect of additionally reducing the supply of common stock, could indeed lead to a subsequent contraction not unlike that of the early 1Q30's. We shall devote one further issue to discussing the possible consequences thereof, and how they mlgh t he avoided. ANTHONY W. TAB ELL AWT vfl DELAFIELD, HARVEY, TABELL, INC. Dow-Jones Industrials (12 00 noon) 1759.67 S & P 500 (1200 noon) n2.36 Cumulative Index (5/15/86) 3116.21 No statement or eyDteSSIQn 01 Opinion or any other mailer herem contamed IS or IS to be deemed to be, directly or mdlrectly an olter or the soliCitation of an olfer to buy or sell any security ret erred loor mentioned The matter IS presented merely for the conventence of the SubscHber While we belIeve the sourcesol our information to be reliable, we In no way represent or guarantee the accuracy thereof norol the statements made herein Any action to be taken by the subSCriber should be based on hiS own investigation and Informa1\on Delalleld, Harvey, Tabel1 tnc, as a corporation and ItS ollicers or employees may now have or may latertal\ll, poSl\lons or trades In respect to any seCUrities mentioned In thiS or any future Issue, and such position may be olfterent 110m any views now or hefCaher epr(!ssed In thIs or any other Issue Delatle!d, Harvey, Tabell Inc which Is registered wllh the SEC as an Investment adVisor, may give adVice 10 Its mvestment adVisory and olhor customers mdependentty 01 any statemCflts made In thiS or In any otner Issue Further Information on any secuflly mentioned herOin IS available on request