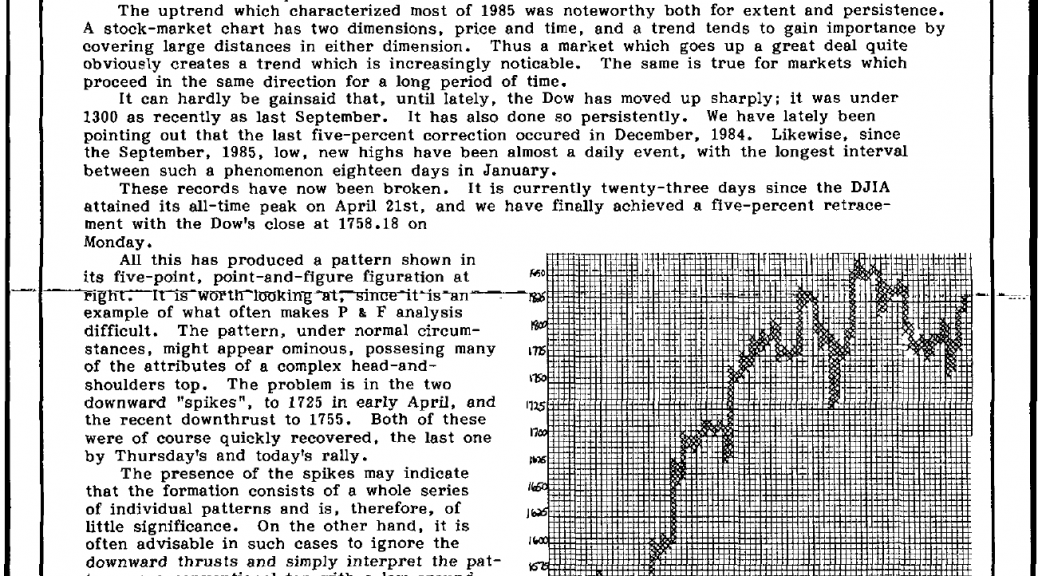 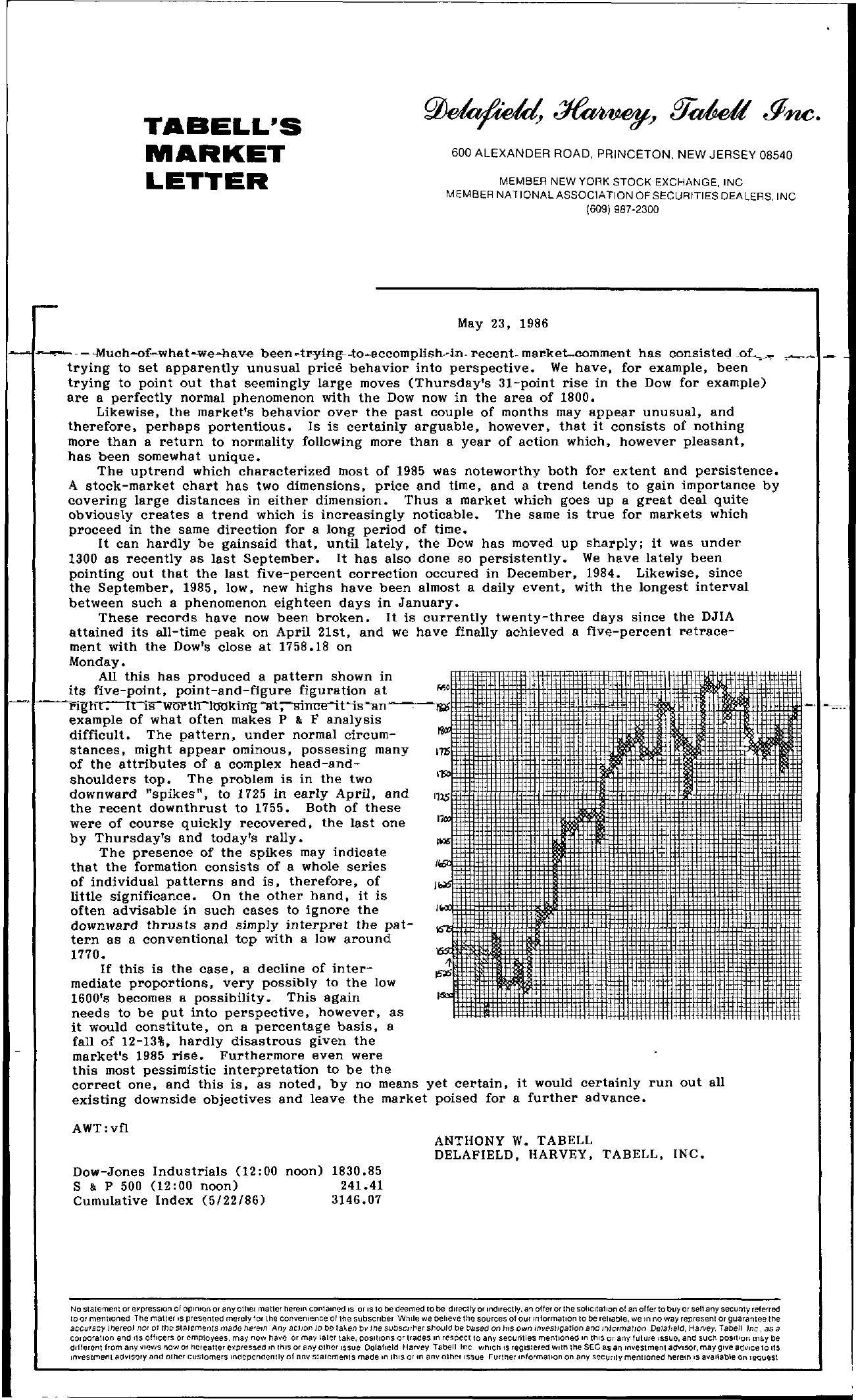 TABELL'S MARKET LETTER 600 ALEXANDER ROAD, PRINCETON, NEW JERSEY 08540 MEMBER NEW YORK STOCK EXCHANGE, INC MEMBER NATIONAL ASSOCIATION OF SECURITIES DEALERS, INC (609) 987-2300 May 23, 1986 11./1', – \., DU4 been .-tr.y-ing–to–accomplish…in. recent- maket-comment has consiste(i of'—-;;.. trying to set apparently unusual price behavior into perspective. We have, for example, been trying to point out that seemingly large moves (Thursday's 31-point rise in the Dow for example) are a perfectly normal phenomenon with the Dow now in the area of 1800. Likewise, the market's behavior over the past couple of months may appear unusual, and therefore, perhaps portentious. Is is certainly arguable, however, that it consists of nothing more than a return to normality following more than a year of action which, however pleasant, has been somewhat unique. The uptrend which characterized most of 1985 was noteworthy both for extent and persistence. A stock-market chart has two dimensions, price and time, and a trend tends to gain importance by covering large distances in either dimension. Thus a market which goes up a great deal quite obviously creates a trend which is increasingly noticable. The same is true for markets which proceed in the same direction for a long period of time. It can hardly be gainsaid that, until lately, the Dow has moved up sharply; it was under 1300 as recently as last September. It has also done so persistently. We have lately been pointing out that the last five-percent correction occured in December, 1984. Likewise, since the September, 1985, low, new highs have been almost a daily event, with the longest interval between such a phenomenon eighteen days in January. These records have now been broken. It is currently twenty-three days since the DJIA attained its all-time peak on April 21st, and we have finally achieved a five-percent retracement with the Dow's close at 1758.18 on Monday. All this has produced a pattern shown in its five-point, point-and-figure figuration at rlt;'-'-'. ' vnu ;;'!. 1U 1 'w example of what often 'no P & F analysis difficult. The pattern, under normal circum- stances, might appear ominous, possesing many of the attributes of a complex head-and- shoulders top. The problem is in the two downward spikes, to 1725 in early April, and the recent downthrust to 1755. Both of these were of course quickly recovered, the last one by Thursday's and today's rally. The presence of the spikes may indicate that the formation consists of a whole series of individual patterns and is, therefore, of little significance. On the other hand, it is often advisable in such cases to ignore the downward thrusts and simply interpret the pat- tern as a conventional top with a low around 1770. If this is the case, a decline of inter- mediate proportions, very possibly to the low 1600's becomes a possibility. This again needs to be put into perspective, however, as it would constitute, on a percentage basis. a fall of 12-13, hardly disastrous given the market's 1985 rise. Furthermore even were this most pessimistic interpretation to be the correct one, and this is, as noted. by no means yet certain. it would certainly run out all existing downside objectives and leave the market poised for a further advance. AWTvfI Dow-Jones Industrials (1200 noon) 1830.85 S & P 500 (1200 noon) 241.41 Cumulative Index (5/22/86) 3146.07 ANTHONY W. TABELL DELAFIELD, HARVEY, TABELL, INC. No statement or erpresslon of OplnlQn or any othel matter herem contained IS or IS 10 be deemed to be directly or Indirectly. an oUer or the solicitation 01 an offer to buyar sell any secunly referred tOOf mentioned The matter IS presented merely lor Ihe convenience of the subscriber While we behevelhe sources 01 QUlin/ormation to be reliable. we In no way represent or guarantee the accuracy thereof nor olthcstatememsmado he'em Any aCllon)o be laxen bl' the sl.Ibscllher Should be based on his own JnYE'stlgalJon and mformaflOfI Delafield, Harvey, labe)) Inc, as a corporation and lIs officers or employees, may now havj) or may Laler take, POSitions or trades In respect to any securities mentioned In thiS or any future Issue, and such pOSll!on may be dil!eron! from any views nowor hClea/tcr cpressed In thiS or any other Issue De!afleld Harvey labell Inc which IS registered with the SEC as an Investment adVisor, mayg!ve atlvlceto ItS Investment adVisory and other customers Independently 01 anv statements made In thiS 01 10 anv other Issue Further Informallon on any security menlloned heroin IS available on reQuest