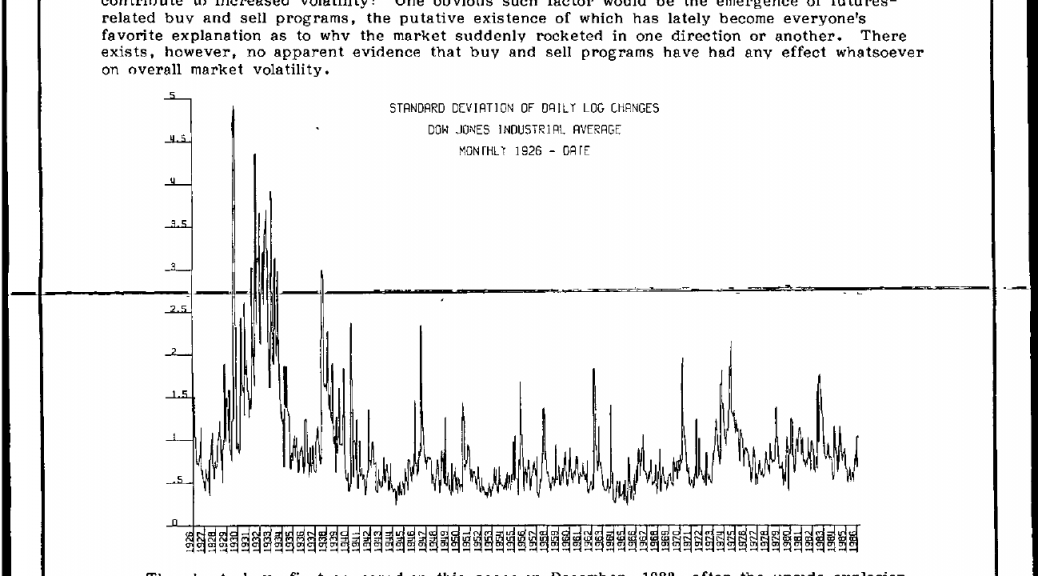 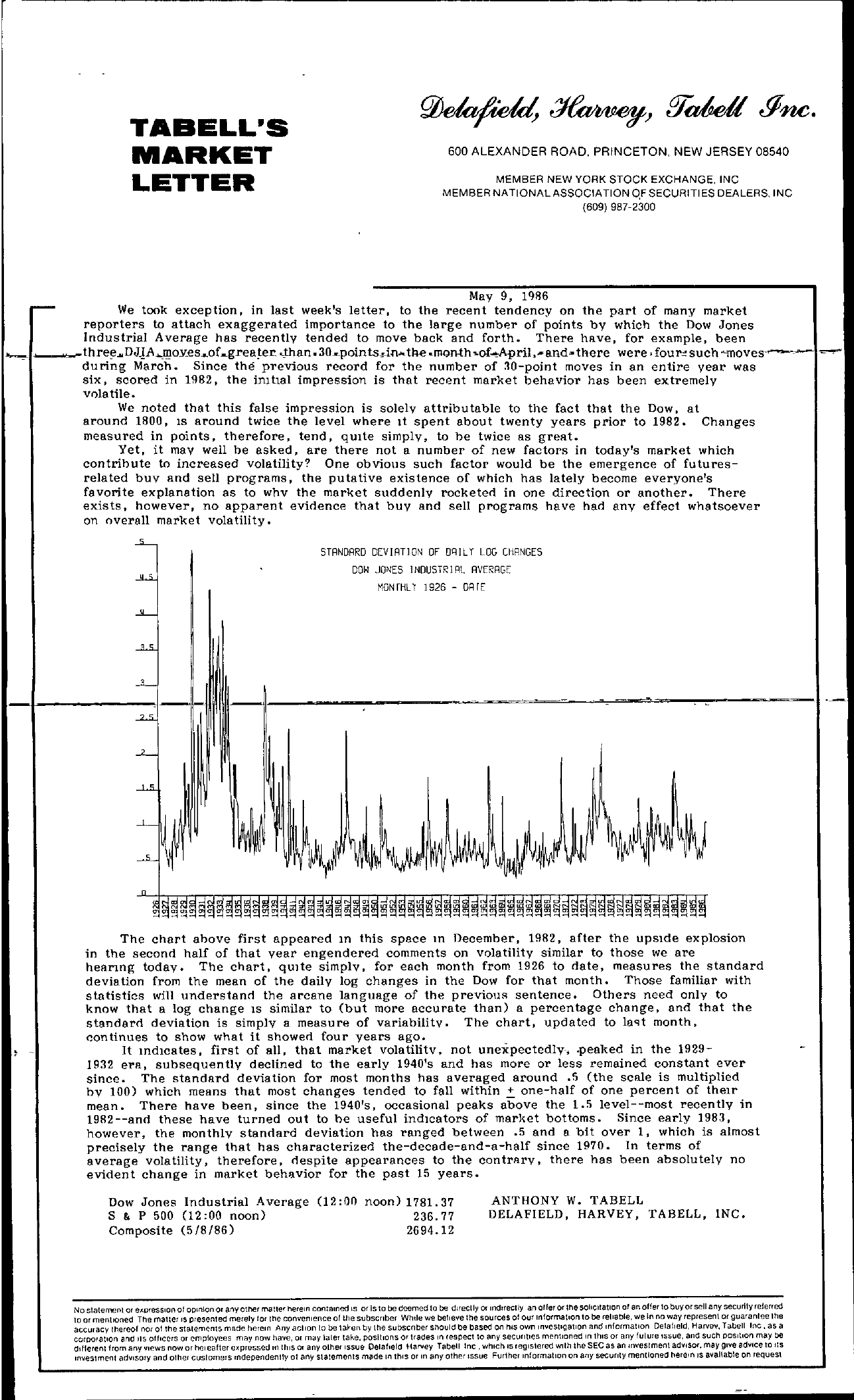 TABELL'S MARKET LETTER 600 ALEXANDER ROAD. PRINCETON. NEW JERSEY 08540 MEMBER NEW YORK STOCK EXCHANGE. INC MEMBER NATIONAL ASSOCIATION O.F SECURITIES DEALERS. INC (609) 987-2300 May 9, 1qR6 We took exception. in last week's letter. to the recent tendency on the part of many market reporters to attach exaggerated importance to the large number of points by which the Dow Jones Industrial Average has recently tended to move back and forth. There have. for example, been 1 threeDJJAll1oyesofgreae ,than. 30pointsin tRe .month ,of-April,.and- there were. four such il1oves-I du ring March. Since the previous record for the number of lO-point moves in an entire year was six, scored in 1982, the imtIal impression is that recent market behavior has been extremely volatile. We noted that this false impression is solely attributable to the fact that the Dow, at around 1800, IS around twice the level where It spent about twenty years prior to 1982. Changes measured in points therefore, tend, qUIte simply, to be twice as great. Yet, it may well be asked. are there not a number of new factors in today's market which contribute to increased volatility One obvious such factor would be the emergence of futures- related buy and sell programs. the putative existence of which has lately become everyone's favorite explanation as to whv the market suddenly rocketed in one direction or another. There exists. however, no apparent evidence that buy and sell programs have had any effect whatsoever on overall market volatility. STANDARD DEVIATION OF DRILl LOG CHRNGES DOW JONES INDUSTRIAL AVERAGE MONrHL1 1926 – DRfE The chart above first appeared In this space In December. 1982. after the upsIde explosion in the second half of that year engendered comments on volatility similar to those we are heanng today. The chart, qmte simplv. for each month from 1926 to date. measures the standard deviation from the mean of the daily log changes in the Dow for that month. Those familiar with statistics will understand the arcane language of the previom. sentence. Others need only to know that a log change IS similar to (but more accurate than) a percentage change. and that the standard deviation is simply a measure of variabilitv. The chart, updated to laClt month. continues to show what it showed four years ago. I! mdICates. first of all. that market volatilitv, not unexpectedly.peal,ed in the 19291932 era, subsequently declined to the early 1940's and has more or less remained constant ever since. The standard deviation for most months has averaged around .5 (the scale is multiplied hv 100) which means that most changes tended to fall within one-half of one percent of theIr mean. There have been, since the 1940's, occasional peaks above the 1.5 level–most recently in 1982–and these have turned out to he useful indIcators of market bottoms. Since early 1983, however, the monthly stanrlard deviation has ranged between .5 and a bit over I, which is almost precisely the range that has characterized the-decade-and-a-half since 1970. In terms of average volatility. therefore, nespite appearances to the contrarv. there has been absolutely no evident change in market beh'lvior for the past 15 years. Dow Jones Industrial Average (1200 noon) 1781.37 S & P 500 (12 00 noon) 236.77 Composite (5/8/86) 2694.12 ANTHONY W. TABELL DELAFIELD, HARVEY, TABELL, INC. NO slatemenl or e…presSlon at opll'1lon or any other matter herem contamed IS or Is to be deemed to be directly or IIldlrectly an orler or the soliCitation of an offer to buyor sell any security fe!errecl 10 or mentioned The matter IS presented merely for the convenience of the subSCriber While we believe the sources 01 our mformahon to be reliable, we In no way represent or guarantee the accuracy thernel nOf 01 the statements made herein Any action to be taren by the subSCriber should be based on hiS own Inyestlgatlon and information Delaheld, Harvey, labell tnc, as a corporation and 115 of/lcers or employees may now have, or may laler take, positIOns or trades In respect to any seCUrities mentioned In thiS or any fulure Issue, and such pOSition may be dillerent from any YleWS now or heleaf\er expressed In thiS or any other Issue Oelafleld Harvey label! tnc ,WhiCh IS registered With the SEC as an Investment adVisor, may give adVice 10 liS mveSlment adVisory and other customers mdependent!y of any statements m3de In thiS or In any other ISSue Further Inform3tlon on any security mentioned herem IS avallabte on request