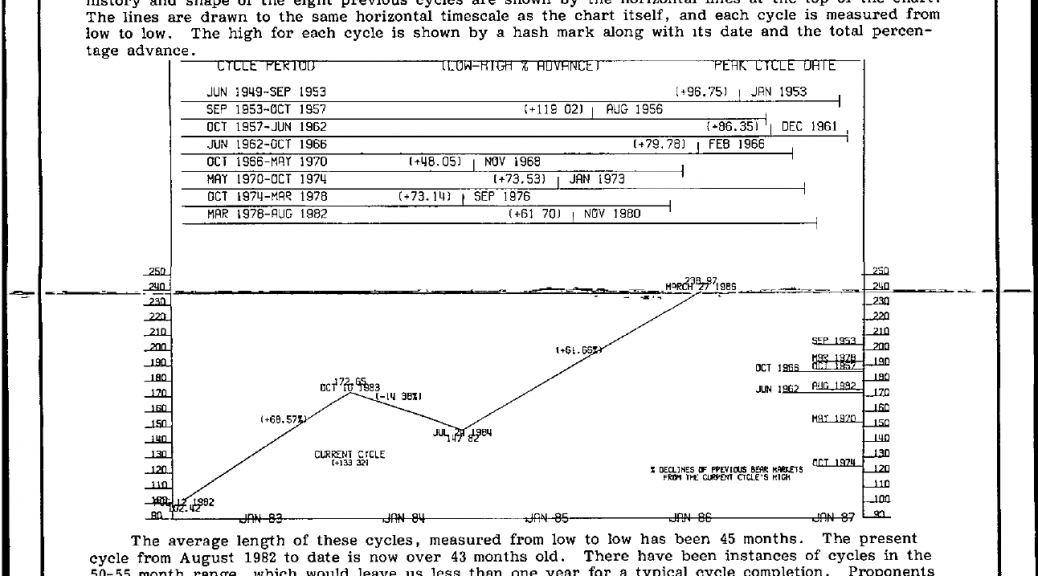 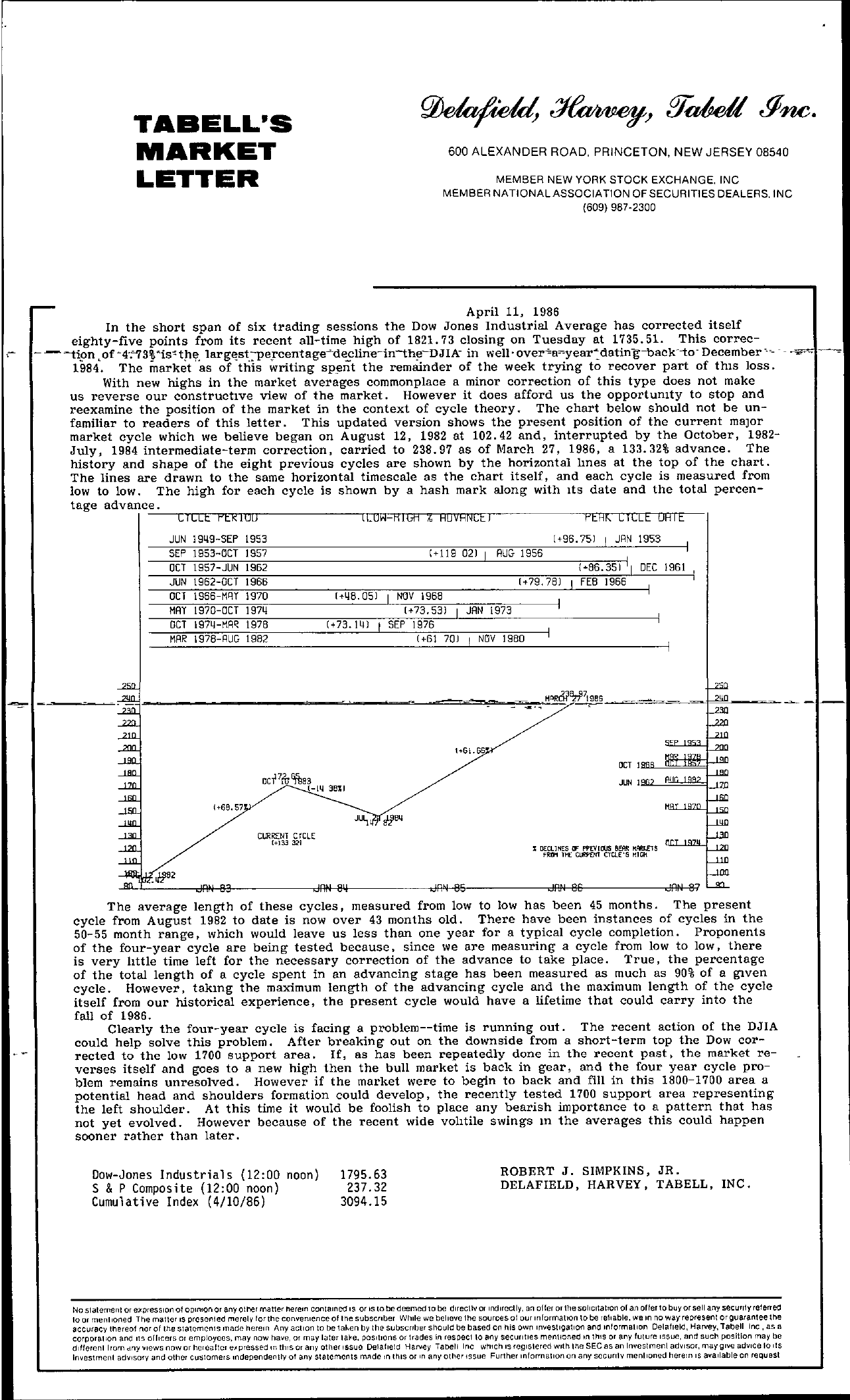 TABELL'S MARKET LETTER 600 ALEXANDER ROAD, PRINCETON, NEW JERSEY 08540 MEMBER NEW YORK STOCK EXCHANGE, INC MEMBER NATIONAL ASSOCIATION OF SECURITIES DEALERS, INC (609) 9872300 April 11, 1986 In the short span of six trading sessions the Dow Jones Industrial Average has corrected itself eighty-five points from its recent all-time high of 1821. 73 closing on Tuesday at 1735.51. This correc- – tipn L of4-73'-ist.h. largst-peJcentage'decline-in4h-DJIA- in well- Qvercayeardating-back—to' December -,0.. – – zo.-1984. The market as of this writing spnt the remainder of the week trying to recover part of thIS loss. With new highs in the market averages commonplace a minor correction of this type does not make us reverse our constructive view of the market. However it does afford us the opportunIty to stop and reexamine the position of the market in the context of cycle theory. The chart below should not be unfamiliar to readers of this letter. This updated version shows the present position of the current maJor market cycle which we believe began on August 12, 1982 at 102.42 and, interrupted by the October, 1982July, 1984 intermediate-term correction, carried to 238.97 as of March 27, 1986, a 133.32 advance. The history and shape of the eight previous cycles are shown by the horizontal hnes at the top of the chart. The lines are drawn to the same horizontal timescale as the chart itself, and each cycle is measured from low to low. The high for each cycle is shown by a hash mark along with Its date and the total percen- tage advanc2e'CllLCLEo-PEIRTIlrJOrrrlCrDnW-HnIGTHY-HDVrRrNYCt'.)–'PERKrCInCC,E,ORIE JUN 1949-SEP 1953 SEP 1953-DCl IS57 OCl IS57-JUN 1962 JUN 1962-0Cl 1966 OCT 1966-MRY 1970 MRY 1970 OCl 1974 OCl 1974 MR 1978 MRR IS7B RUG 19B2 (48.051 ( 73.14) (119 02) 96.75) I JRN 1953 RUG IS56 86.351 II DEC IS61 79.781 I FEB IS66 I NOV 1968 73.53) JRN 1973 SEP 1976 (61 70) I NDV ISBO .- (68.57 CURRENT CfClE 1133 321 t61.66 OCT 11l1liE'—'!!.h JUN 11llll2'-''''''''''''L.11C I DECLINES !F f'VEVM 6!AA ItRf.E1S fR0I1111E ClJ!9Em CTCLE'S 11(;11 The average length of these cycles, measured from low to low has been 45 months. The present cycle from August 1982 to date is now over 43 months old. There have been instances of cycles in the 50-55 month range. which would leave us less than one year for a typical cycle completion. Proponents of the four-year cycle are being tested because. since we are measuring a cycle from low to low, there is very httle time left for the necessary correction of the advance to take place. True, the percentage of the total length of a cycle spent in an advancing stage has been measured as much as 90 of a gLven cycle. However, taklng the maximum length of the advancing cycle and the maximum length of the cycle itself from our historical experience. the present cycle would have a lifetime that could carry into the fall of 1986. Clearly the four-year cycle is facing a problem–time is running out. The recent action of the DJIA could help solve this problem. After breaking out on the downside from a short-term top the Dow corrected to the low 1700 support area. If, as has been repeatedly done in the recent past, the market reverses itself and goes to a new high then the bull market is back in gear, and the four year cycle problem remains unresolved. However if the market were to begin to back and fill in this 1800-1700 area a potential head and shoulders formation could develop, the recently tested 1700 support area representing the left shoulder. At this time it would be foolish to place any bearish importance to a pattern that has not yet evolved. However because of the recent wide vohtile swings In the averages this could happen sooner rather than later. Dow-Jones Industrials (1200 noon) 1795.63 S &P Composite (1200 noon) 237.32 Cumulative Index (4/10/86) 3094.15 ROBERT J. SIMPKINS, JR. DELAFIELD, HARVEY, TABELL, lNC. No statement or expression of opinion or any other mailer herein contained IS or IS to be deemed to be dlreclivor IndireCtly, an oHer or the sohcltahon 01 an olfer to buy or sell any security rcferred to or menloned The matter IS presented merelv for the convcmence of the subscriber While we believe the sources of our Information to be reliable. we In no way represent or guarantee the accuracy thereof nor of the statcmens made herein Any action to be taen by the SUbSCflber should be based on his own Investigation and Information Delafield, Harvey, labell Inc, as a corporation and ItS officers or employees, may now have, Of may later tae, pOSitions or trades in respect to any secuntles mentioned In thiS or any future Issue, and such position may be dlfferenl Irom clny Iews now or hcroaJtcr epressed In thiS or any otller ISSUO Delafield Harvey Tabell Inc which IS registered With the SEC as an Investment adVisor, may give adVice to IS Investment adVisory and other cuSlomers Independently of any statements mllde In thiS or In any other Issue Further Information on any sccuntv mentioned horein IS available on request