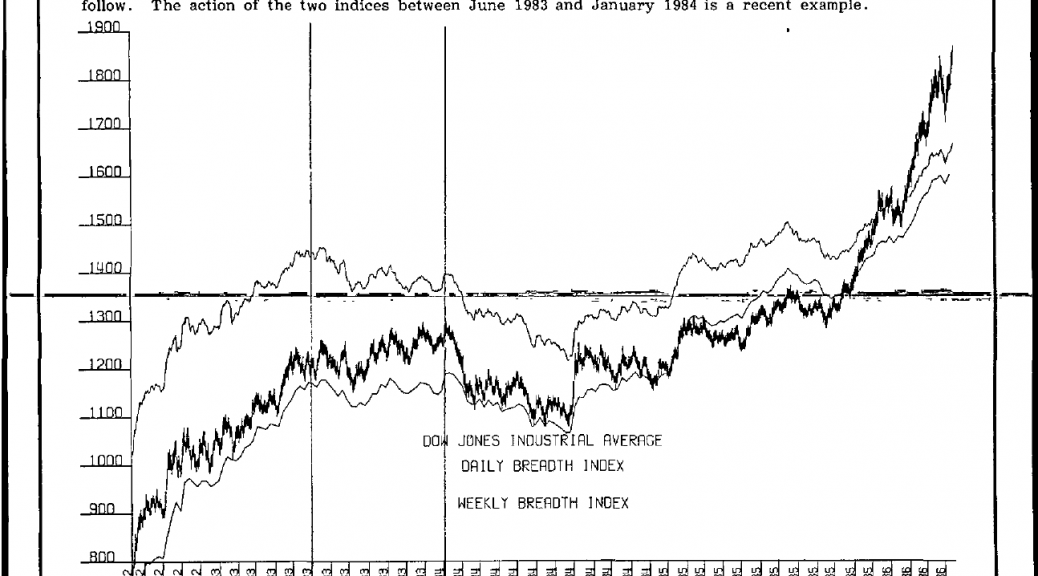 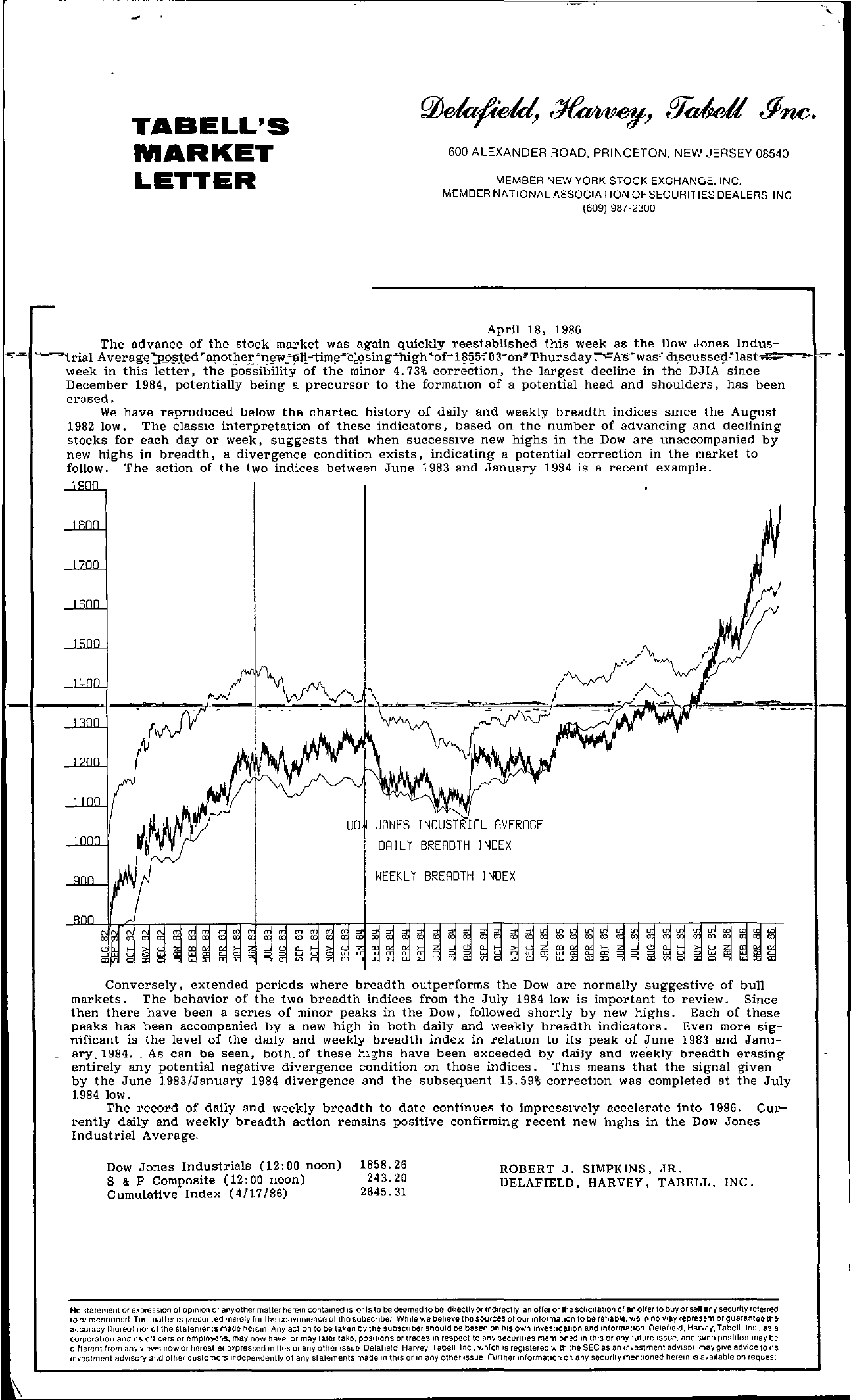 – TABELL'S MARKET LETTER 600 ALEXANDER ROAD, PRINCETON, NEW JERSEY 08540 MEMBER NEW YORK STOCK EXCHANGE, INC, MEMBER NATIONAL ASSOCIATION OF SECURITIES DEALERS, INC (609) 987-2300 April 18, 1986 The advance of the stock market was again quickly reestablished this week as the Dow Jones lndus'-'trial Averag p5E'Jed anotheE nw,!ll!tim-clsinghigh of-185 03-on'l'hursdayA-s- was dlSCll s-se-cl,.last''.M-….,,J-, week in this letter, the possibility of the minor 4.73 correction. the largest decline in the DJIA since December 1984, potentially being a precursor to the formation of a potential head and shoulders. has been erased. We have reproduced below the charted history of daily and weekly breadth indices SInce the August 1982 low. The classIc interpretation of these indicators, based on the number of advancing and declining stocks for each day or week, suggests that when succeSSIve new highs in the Dow are unaccompanied by new highs in breadth, a divergence condition exists, indicating a potential correction in the market to follow. The action of the two indices between June 1983 and January 1984 is a recent example. Dot i DRILY BRERDTH INDEX WEEKLr BRERDTH INDEX Conversely, extended periods where breadth outperforms the Dow are normally suggestive of bull markets. The behavior of the two breadth indices from the July 1984 low is important to review. Since then there have been a serIes of minor peaks in the Dow, followed shortly by new highs. Each of these peaks has been accompanied by a new high in both daily and weekly breadth indicators. Even more significant is the level of the dmly and weekly breadth index in relatIon to its peak of June 1983 and January.1984 .. As can be seen, both.of these highs have been exceeded by daily and we-ekly breadth erasing entirely any potential negative divergence condition on those indices. ThIS means that the signal given by the June 1983/January 1984 divergence and the subsequent 15.59 correctlon was completed at the July 1984 low. The record of daily and weekly breadth to date continues to impressIvely accelerate into 1986. Currently daily and weekly breadth action remains positive confirming recent new hIghs in the Dow Jones Industrial Average. Dow Jones Industrials (12 00 noon) 1858.26 S & P Composite (12 00 noon) 243.20 Cumulative Index (4/17/86) 2645.31 ROBERT J. SIMPKINS, JR. DELAFIELD, HARVEY, TABELL, INC. No statement or epreSS10n 01 opinion or any other matler herein contained 15 or 1510 be deemed 10 be dlrectryo! mdlrectly an offeror thesohcltatlon of an offer lobuyorsell any securl\yrelerred tOOl mentioned The matter IS presented merely for Ihe convenience 01 the subscriber While we believe the sources of our information 10 be reliable. we In no …ay represent or guarantee the accuracy lhereal nor of the stalements made herCIfl Any action 10 be talcn by the subscriber should be based on hIs own investigation and Information Oelafll,ld. Harvey, Tabell Inc, as a corporation and ItS officers or employocs. may now have, or may lator take. pOSItions or trades In respccllO any securities mentIOned In thiS or any future Issue, and such posilion may be different from any views nOw or h(lJcafter epressed In thts or any othor Issue Delafield Harvey label! tnc which IS registered wllh the SEC as an Inestment ad\sor, may give advlco 10 liS Investment adVISOry and olher customers wdependenUy of any stalements made In thiS or In any other Issue Furthor information on any security mentioned herem IS avarlable on request