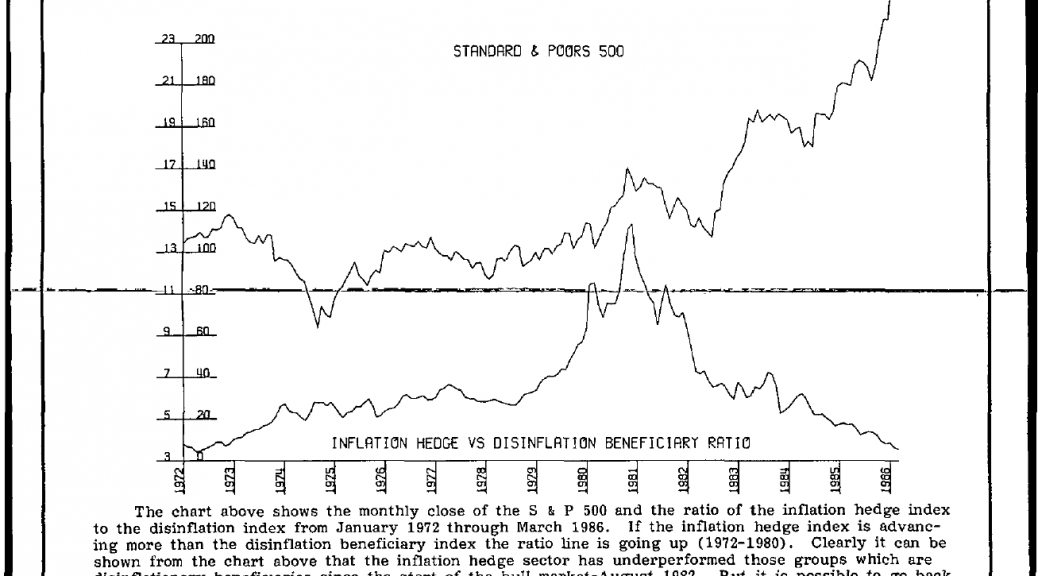 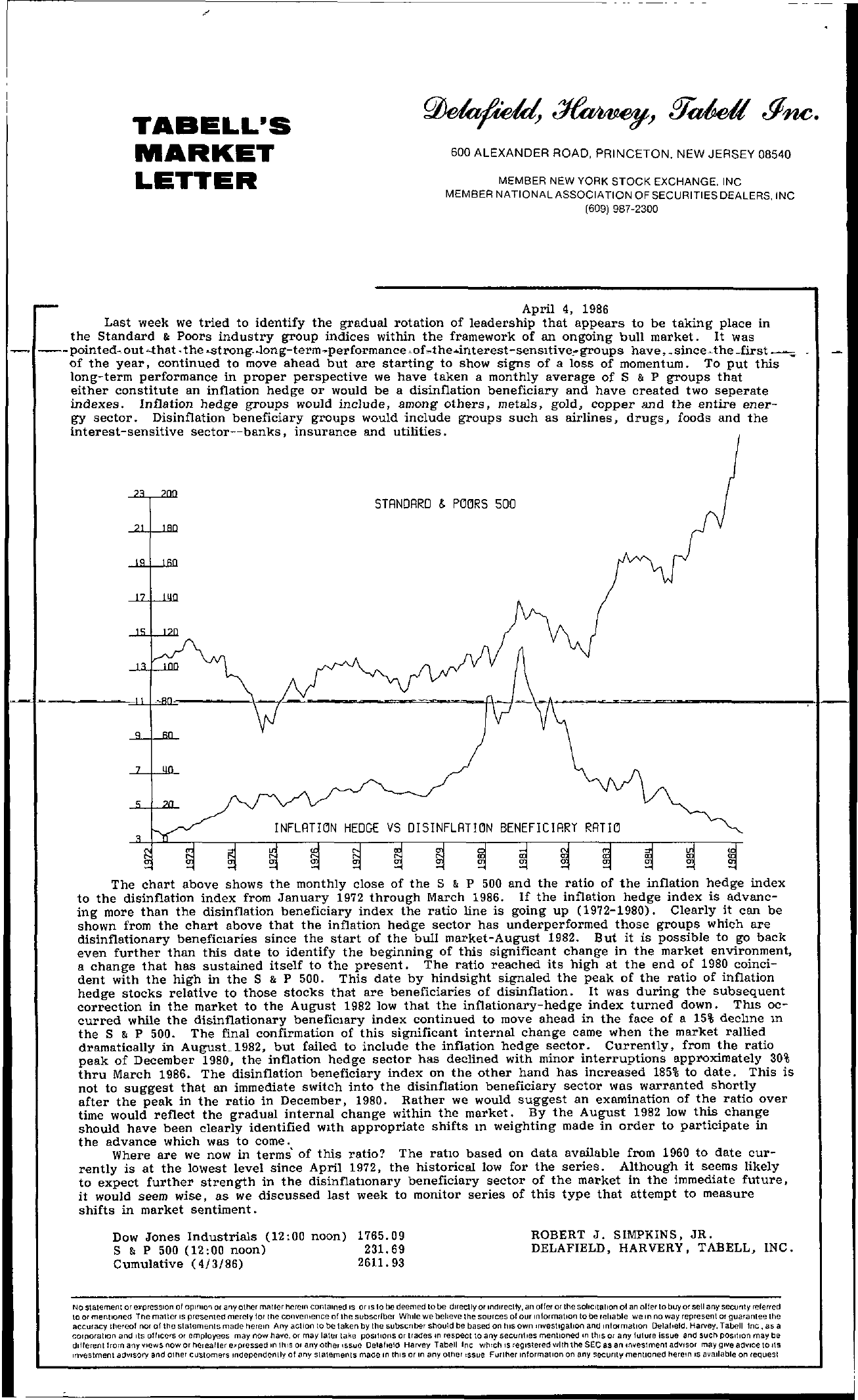 TABELL'S MARKET LETTER 600 ALEXANDER ROAD, PRINCETON. NEW JERSEY 08540 MEMBER NEW YORK STOCK EXCHANGE. INC MEMBER NATIONAL ASSOCIATION OF SECURITIES DEALERS. INC (609) 987-2300 April 4, 1986 Last week we tried to identify the gradual rotation of leadership that appears to be taking place in the Standard & Poors industry group indices within the framework of an ongoing bull market. It was – – – pointed-out ….that. the –stron-g-long-t-erm-performance Lof,.,the….mterest-sensltive…. groups have, sincethe -first of the year, continued to move ahead but are starting to show signs of a loss of momentum. To put this long-term performance in proper perspective we have taken a monthly average of S & P groups that either constitute an inflation hedge or would be a disinflation beneficiary and have created two seperate indexes. Inflation hedge groups would include, among others, metals, gold, copper and the entire energy sector. Disinflation beneficiary groups would include groups such as airlines, drugs … foods and the interest-sensitive sector–banks, insurance and utilities. STRNDRRD &paaRS 500 INFLRTlaN HEDGE VS DISINFLRTlaN BENEFICIARY RRTla The chart above shows the monthly close of the S & P 500 and the ratio of the inflation hedge index to the disinflation index from January 1972 through March 1986. If the inflation hedge index is advancing more than the disinflation beneficiary index the ratio line is going up (1972-1980). Clearly it can be shown from the chart above that the inflation hedge sector has underperformed those groups which are disinflationary benefiCIaries since the start of the bull market-August 1982. But it is possible to go back even further than this date to identify the beginning of this significant change in the market environment, a change that has sustained itself to the present. The ratio reached its high at the end of 1980 coincident with the high in the S & P 500. This date by hindsight signaled the peak of the ratio of inflation hedge stocks relative to those stocks that are beneficiaries of disinflation. It was during the subsequent correction in the market to the August 1982 low that the inflationary-hedge index turned down. Tlus occurred while the disinflationary beneficlary index continued to move ahead in the face of a 15 dechne m the S & P 500. The final confirmation of this significant internal change came when the market rallied dramatically in AugusL 1982, but failed to include the inflation hedge sector. Currently. from the ratio peak of December 1980, the inflation hedge sector has declined with minor interruptions approximately 30 thru March 1986. The disinflation beneficiary index on the other hand has increased 185 to date. This is not to suggest that an immediate switch into the disinflation beneficiary sector was warranted shortly after the peak in the ratio in December, 1980. Rather we would suggest an examination of the ratio over time would reflect the gradual internal change within the market. By the August 1982 low this change should have been clearly identified with appropriate shifts in weighting made in order to participate in the advance which was to come. Where are we now in terms' of this ratio The raho based on data available from 1960 to date cur- rently is at the lowest level since April 1972, the historical low for the series. Although it seems likely to expect further strength in the disinflahonary beneficiary sector of the market in the immediate future, it would seem wise. as we discussed last week to monitor series of this type that attempt to measure shifts in market sentiment. Dow Jones Industrials (12 00 noon) 1765.09 S & P 500 (1200 noon) 231. 69 Cumulative (4/3/86) 2611. 93 ROBERT J. SIMPKINS, JR. DELAFIELD, HARVERY. TABELL, INC. NO statement or cpreSSlon of OplnlO'1 or any other matter herem contained IS or IS 10 be deemed to be directly or indirectly, an offer or the sohCltatlon 01 an cHer to buy or sell any security referred 10 or mentioned The mailer IS presented merely tor the convenience of the subscriber WhllclIIe beheve the sources of our information lobe reliable we In no way represent Of guarantee the accuracy theroof nor 01 the statements made herein Any action to be tak.en by the subscriber should be based on hiS own investigation and Information Delafield, Harvey, Tabell Inc. as a corporation and Its aUlcefs or employees may now have, or may laler take pOSitions or trades In respect \0 any securities mentioned In thiS 01 any future Issue and such POSition may be different Irom any views nowor herealter epressed In thiS or any other ISSUO Oetallolcl Harvey Tabell Inc whIch IS regIstered with the SEC as an rnvestment adVIsor may gIve aovlcetorls rnveslment adVIsory and other customers mdependently 01 any statements made In thiS or In any other Issue Further Information on any security mentioned herem 15 avallabte on request