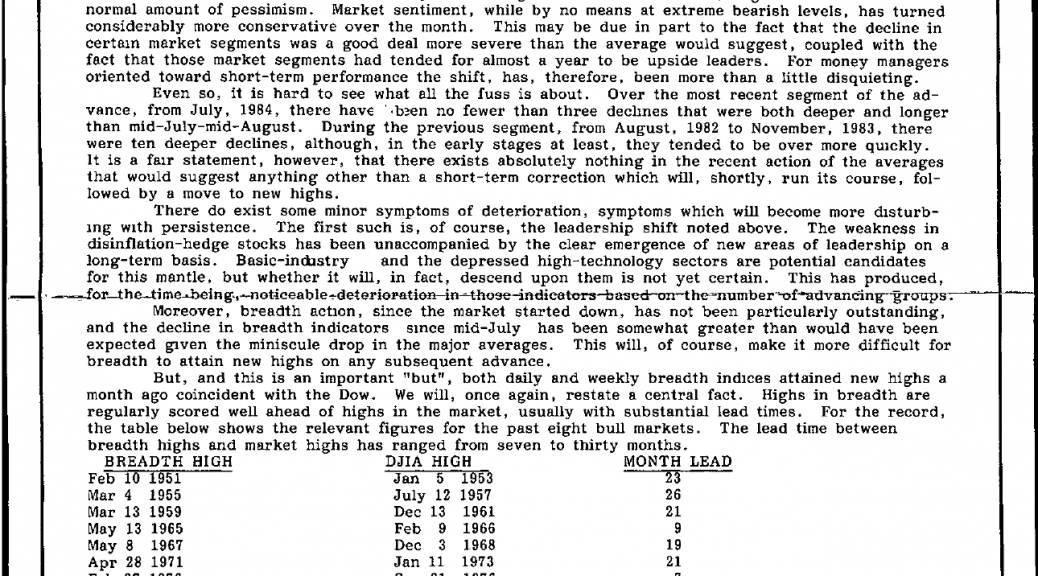 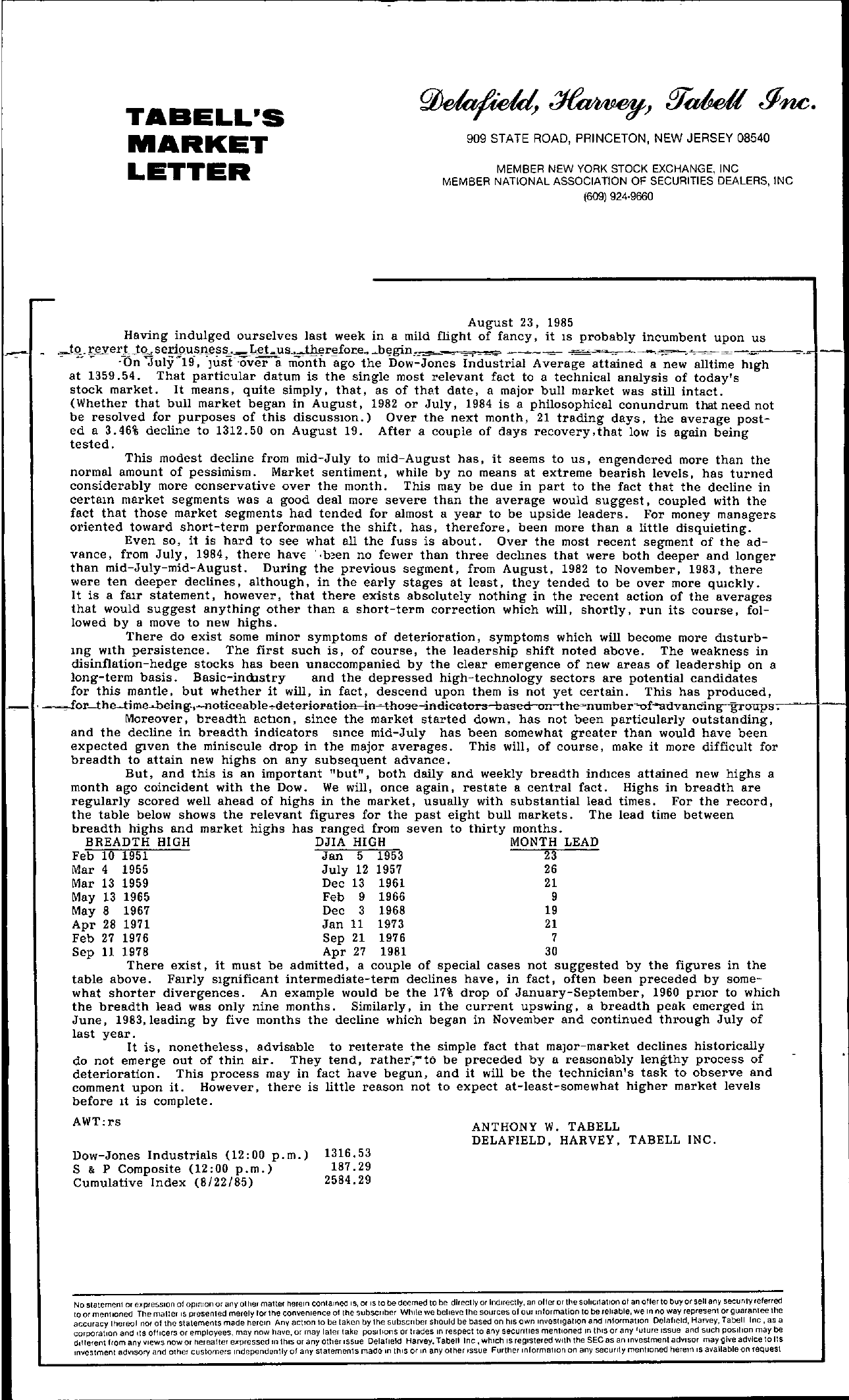 TABELL'S MARKET LETTER 909 STATE ROAD, PRINCETON, NEW JERSEY 08540 MEMBER NEW YORK STOCK EXCHANGE, INC MEMBER NATIONAL ASSOCIATION OF SECURITIES DEALERS, INC (609) 9249660 – August 23. 1985 Having indulged ourselves last week in a mild flight of fancy, it 15 probably incumbent upon us ,.JQrgxertJQ..,.seri9usnss. Le.t usrgfOIe……..bE;!gin,, –…….— ….. ..,,',—', – – – – -On July .. Hi. -ust-Q'Ver8. month ago the Dow-Jones Idustrial Average attained a new alltime hlgh at 1359.54. That particular datum is the single most relevant fact to a technical analysis of today's stock market. It means. quite simply. that, as of that date. a major bull market was still intact. (Whether that bull market began in August. 1982 or July. 1984 is a philosophical conundrum that need not be resolved for purposes of this discussIOn.) Over the next month, 21 trading days, the average post- ed a 3.46 decline to 1312.50 on August 19. After a couple of days recovery.that low is again being tested. This modest decline from mid-July to mid-August has. it seems to us, engendered more than the normal amount of pessimism. Market sentiment. while by no means at extreme bearish levels. has turned considerably more conservative over the month. This may be due in part to the fact that the decline in certaIn market segments was a good deal more severe than the average would suggest. coupled with the fact that those market segments had tended for almost a year to be upside leaders. For money managers oriented toward short-term performance the shift. has, therefore. been more than a little disquieting. Even so, it is hard to see what all the fuss is about. Over the most recent segment of the ad- vance, from July, 1984, there haVE ben no fewer than three declInes that were both deeper and longer than mid-July-mid-August. During the previous segment, from August, 1982 to November, 1983. there were ten deeper declines, although, in the early stages at least, they tended to be over more qwckly. It is a falr statement, however, that there exists absolutely nothing in the recent action of the averages that would suggest anything other than a short-term correction which will, shortly, run its course, fol- lowed by a move to new highs. There do exist some minor symptoms of deterioration, symptoms which will become more dlsturb- Ing WIth persistence. The first such is, of course, the leadership shift noted above. The weakness in disinflation-hedge stocks has been unaccompanied by the clear emergence of new areas of leadership on a long-term basis. Basic-indlstry and the depressed high-technOlogy sectors are potential candidates for this mantle, but whether it will, in fact, descend upon them is not yet certain. This has produced, ,orthe–time–..being.,not4ceabledeterio-PBtion-inthose-indicat-ors-ba-sed-on-thenumber—of-advanclng-g-rOlIps'7.—-I Moreover, breadth actIOn, since the market started down, has not been particularly outstanding, and the decline in breadth indicators SInce mid-July has been somewhat greater than would have been expected gIven the miniscule drop in the major averages. This will, of course, make it more difficult for breadth to attain new highs on any subsequent advance. But, and this is an important but, both daily and weekly breadth indlces attained new highs a month ago coincident with the Dow. We will, once again. restate a central fact. Highs in breadth are regularly scored well ahead of highs in the market, usually with substantial lead times. For the record, the table below shows the relevant figures for the past eight bull markets. The lead time between breadth highs and market highs has ranged from seven to thirty months. BREADTH HIGH DJIA HIGH MONTH LEAD Feb 10 1951 Jan 5 1953 23 Mar 4 1955 July 12 1957 26 Mar 13 1959 Dec 13 1961 21 May 13 1965 Feb 9 1966 9 May 8 1967 Dec 3 1968 19 Apr 28 1971 Jan 11 1973 21 Feb 27 1976 Sep 21 1976 7 Sep 11 1978 Apr 27 1981 30 There exist, it must be admitted, a couple of special cases not suggested by the figures in the table above. F81rly slgnificant intermediate-term declines have, in fact, often been preceded by some- what shorter divergences. An example would be the 17 drop of January-September. 1960 prIOr to which the breadth lead was only nine months. Similarly, in the current upswing, a breadth peak emerged in June, 1983, leading by five months the decline which began in November and continued through July of last year. It is I nonetheless, advisable to reIterate the simple fact that major-market declines historically do not emerge out of thin air. They tend, rather,-to be preceded by a reasonably lengthy process of deterioration. This process may in fact have begun, and it will be the technician's task to observe and comment upon it. However, there is little reason not to expect at-least-somewhat higher market levels before It is complete. AWTrs Dow-Jones Industrials (12 00 p. m.) 1316.53 S & P Composite (1200 p.m.) 187.29 Cumulative Index (8/22/85) 2584.29 ANTHONY W. TABELL DELAFIELD. HARVEY. TABELL INC. No statement or epfe5Slon 01 opinion Of any other matter herein contained IS, or IS to be deemed to be directly or Indlreclly, an olter or the soliCitation of an offer to buy or sell any security re/erred to or mentIOned The mailer IS prosented merely for Ihe convenience of the subSCliber While we believe the sources of our information 10 be rohable, we In no way represent or guarantee the accuracy thereal nor of the statements made herein Any achon to be taken by the subscnber should be based on hiS own Investigation and Intormatlon Delafield, Harvey, Tabetl tnc, as a corporation and Its officers or employees, may now have, or may later take pOSI\lons or trades In respect to any securities mentioned In thiS or any future Issue and such position may be dl!ferent 110m any views nowor herealter e;tpressed In th,s or any other Issue Detafleld Harvey. Tabell Inc, Wh1Ch IS registered WIth the SECas an Ir'lvestment adVisor may give advice to lis Ir'lvestment adVISOry and other customers Independently of any statements made In thiS or In any other Issue Further Ir'lformatlon on any security mentIOned hereIn IS available on request