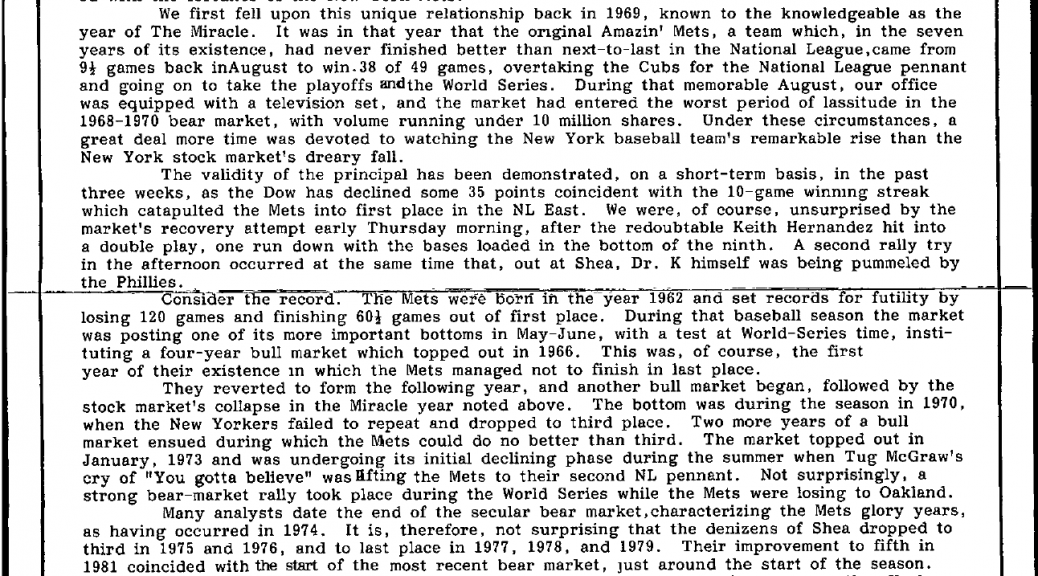 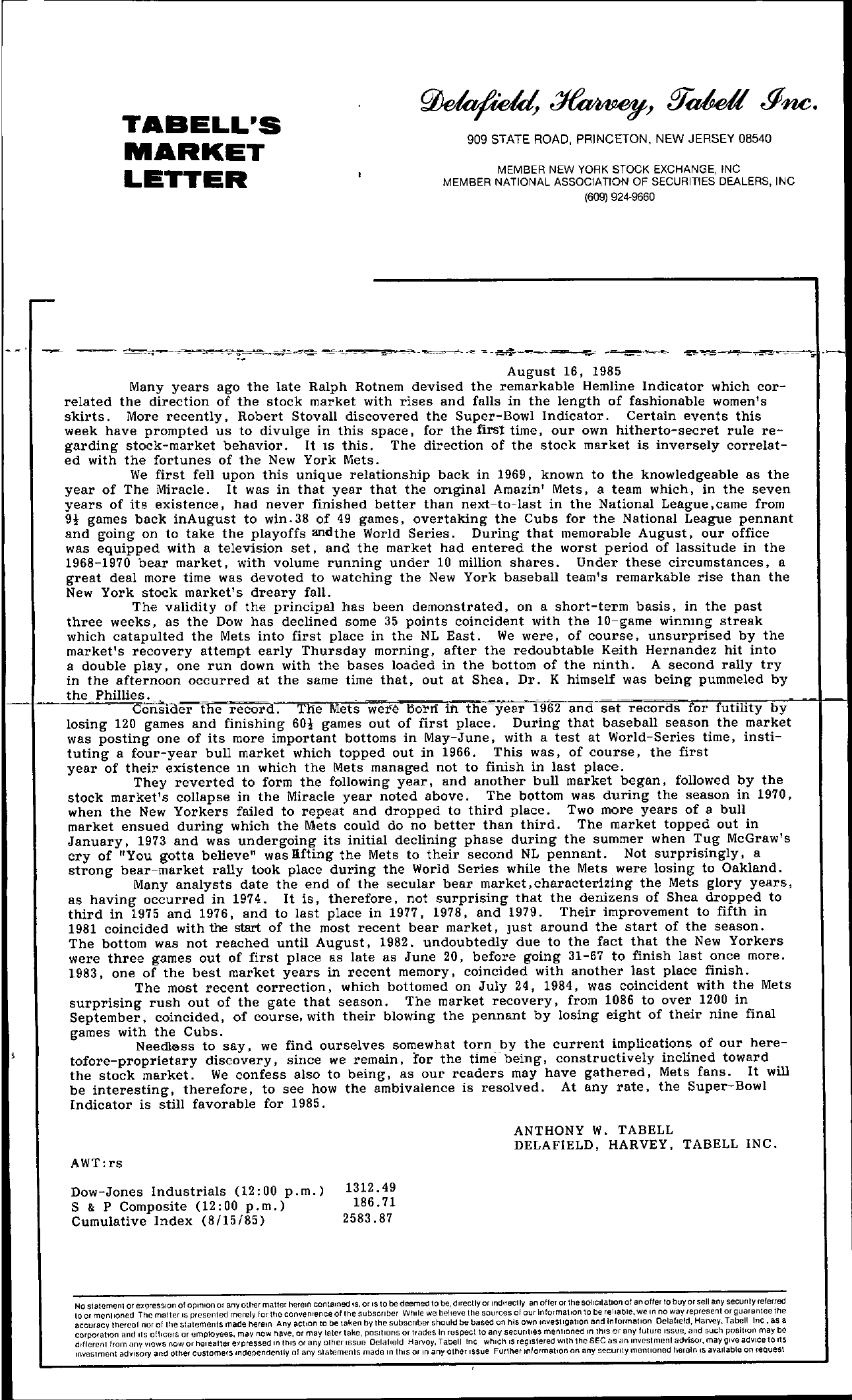 TABELL'S MARKET LETTER 909 STATE ROAD, PRINCETON, NEW JERSEY 08540 MEMBER NEW YORK STOCK EXCHANGE, INC MEMBER NATIONAL ASSOCIATION OF SECURITIES DEALERS, INC (6091 924-9660 August 16, 1985 Many years ago the late Ralph Rotnem devised the remarkable Hemline Indicator which cor- related the direction of the stock market with rises and falls in the length of fashionable women's skirts, More recently, Robert Stovall discovered the Super-Bowl Indicator. Certain events this week have prompted us to divulge in this space, for the first time, our own hitherto-secret rule regarding stock-market behavior, It IS this, The direction of the stock market is inversely correlated with the fortunes of the New York Mets. We first fell upon this unique relationship back in 1969, known to the knowledgeable as the year of The Miracle. It was in that year that the onginal Amazin' Mets, a team which, in the seven years of its existence, had never finished better than next-to-Iast in the National League,came from 9t games back inAugust to win.38 of 49 games, overtaking the Cubs for the National League pennant and going on to take the playoffs andthe World Series. During that memorable August, our office was equipped with a television set, and the market had entered the worst period of lassitude in the 1968-1970 bear market, with volume running under 10 million shares, Under these circumstances, a great deal more time was devoted to watching the New York baseball team's remarkable rise than the New York stock market's dreary fall. The validity of the principal has been demonstrated, on a short-term basis, in the past three weeks, as the Dow has declined some 35 points coincident with the 10-game winmng streak which catapulted the Mets into first place in the NL East. We were, of course, unsurprised by the market's recovery attempt early Thursday morning, after the redoubtable Keith Hernandez hit into a double play, one run down with the bases loaded in the bottom of the ninth, A second rally try in the afternoon occurred at the same time that, out at Shea, Dr, K himself was being pummeled by the Phillies, Consiaer the record 'rne Mets were Dorn ih the year 1962 and set records for futility by losing 120 games and finishing 60t games out of first place, During that baseball season the market was posting one of its more important bottoms in May-June, with a test at World-Series time, instituting a four-year bull market which topped out in 1966, This was, of course, the first year of their existence In which the Mets managed not to finish in last place, They reverted to form the following year, and another bull market began, followed by the stock market's collapse in the Miracle year noted above, The bottom was during the season in 1970, when the New Yorkers failed to repeat and dropped to third place, Two more years of a bull market ensued during which the Mets could do no better than third, The market topped out in January, 1973 and was undergoing its initial declining phase during the summer when Tug McGraw's cry of You gotta believe was lifting the Mets to their second NL pennant. Not surprisingly, a strong bear-market rally took place during the World Series while the Mets were losing to Oakland, Many analysts date the end of the secular bear market, characterizing the Mets glory years, as having occurred in 1974, It is, therefore, not surprising that the denizens of Shea dropped to third in 1975 and 1976, and to last place in 1977, 1978, and 1979. Their improvement to fifth in 1981 coincided with the start of the most recent bear market, Just around the start of the season, The bottom was not reached until August, 1982, undoubtedly due to the fact that the New Yorkers were three games out of first place as late as June 20, before going 31-67 to finish last once more. 1983, one of the best market years in recent memory, coincided with another last place finish. The most recent correction, which bottomed on July 24, 1984, was coincident with the Mets surprising rush out of the gate that season. The market recovery, from 1086 to over 1200 in September, coincided, of course, with their blowing the pennant by losing eight of their nine final games with the Cubs. Needless to say, we find ourselves somewhat torn by the current implications of our here- tofore-proprietary discovery, since we remain, for the tlme- being! constructively inclined toward the stock market. We confess also to being, as our readers may have gathered, Mets fans. It will be interesting, therefore, to see how the ambivalence is resolved. At any rate, the Super-Bowl Indicator is still favorable for 1985. AWTrs ANTHONY W. TAB ELL DELAFIELD, HARVEY, TAB ELL INC. Dow-Jones Industrials (12 00 p. m. ) 1312.49 S & P Composite (1200 p.m.) 186.71 Cumulative Index (8/15/85) 2583.87 NO statement or epT(!SSlon of Opinion Of any other malter herem contained IS, or IS to be deemed to be, directly or indirectly an offer or the soliCitation of an offer to buyor sell any security referred 10 or mentioned The malter IS presented merely !altho conventenceol the subscriber While we believe the sources of our Information to be reliable, we In no way represent or guarantee the accuracy thereof nor of Ihe statements made herein Any schon to be taken by thc subscriber should be based on his own investigation and Information Delafield, Harvey, Tabell Inc, as a corporation and Its olheers or employees, may now have, or may later lake, pOSlllons or trades In respect to any securities mentioned In thiS or any future Issue, and such position may be different from any views now or hCleaiter expressed In thiS or any olher Issue Delafield Harvey, label! Inc which IS registered With the SEC as an Investment advisor, may give adVice to ItS Investment adVISOry and other customers mdependenlly 01 any statements made In thiS or In any other Issue Further Intormahonon any security mentioned herein IS available on request