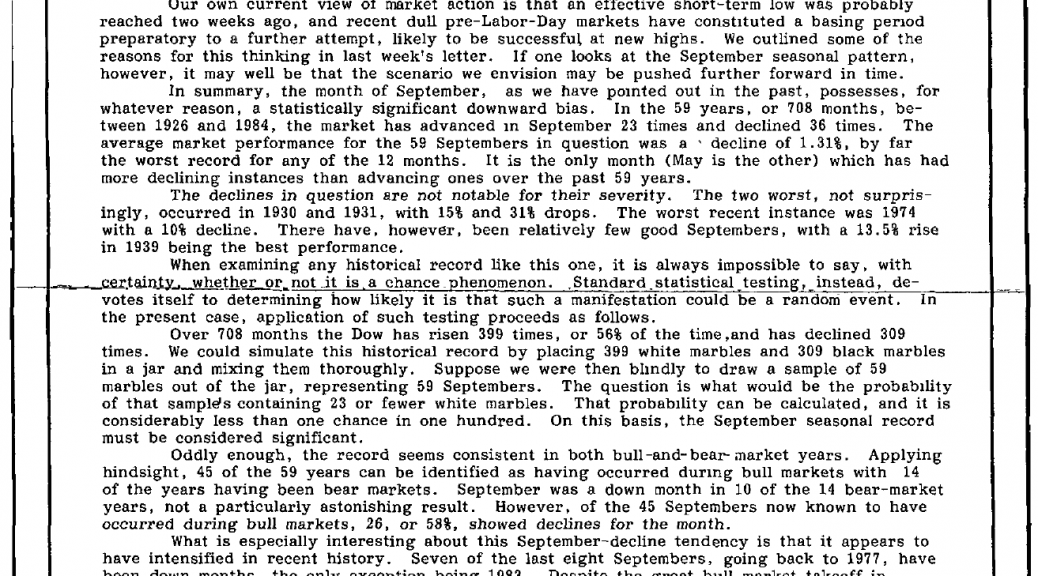 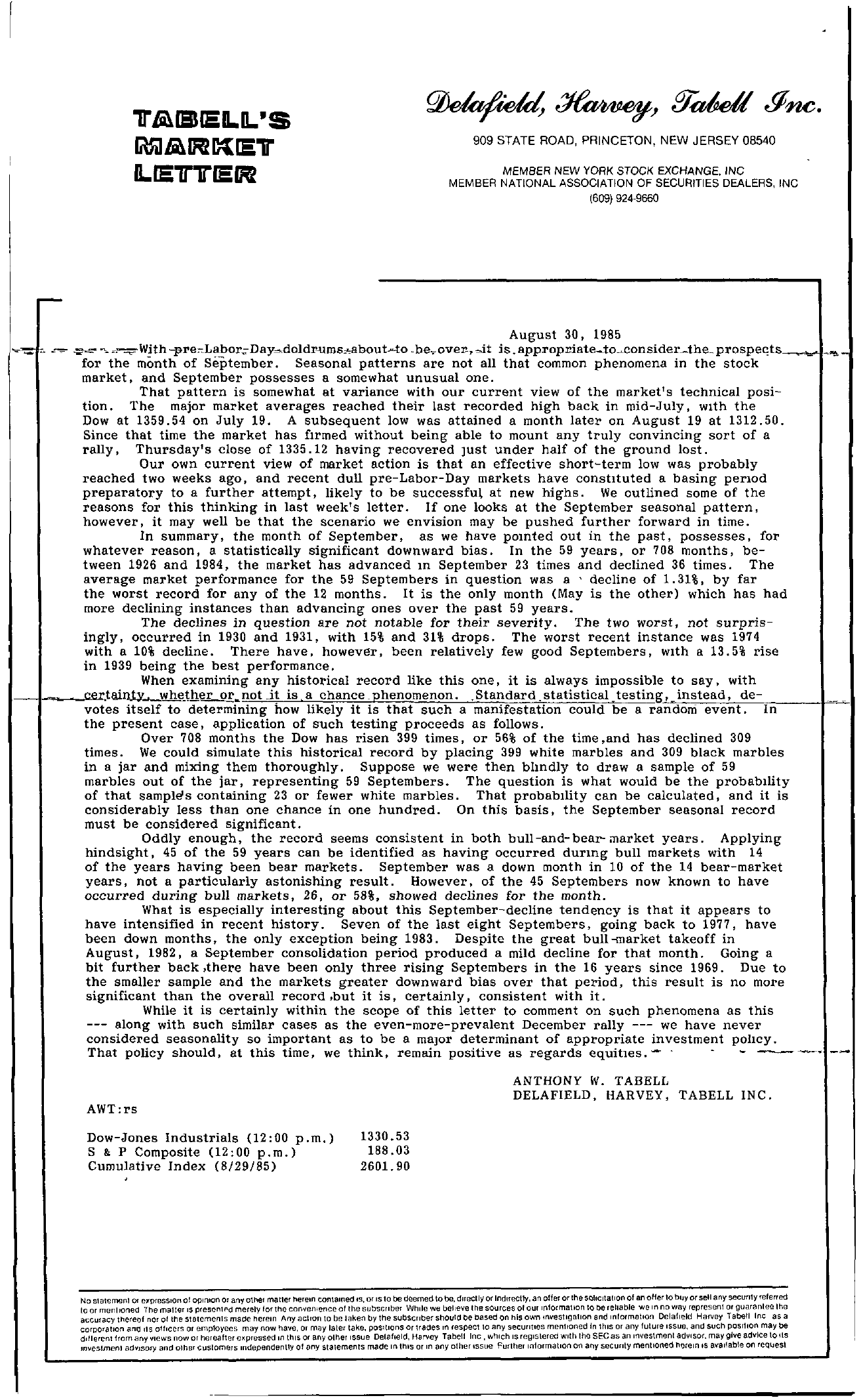 'U'IBUER.R.' S Iil1lI 1Rl rE'U' R.rEVVIEUfl 909 STATE ROAD, PRINCETON, NEW JERSEY 08540 MEMBER NEW YORK STOCK EXCHANGE, INC MEMBER NATIONAL ASSOCIATION OF SECURITIES DEALERS, INC (609) 9249660 August 30. 1985 ''– . ….. ;-. -.– With -pre.Labor.;-Day.doldr-umsr,aboutAo -be… over- 7 .,it is. appropriateto–,-considerthe prospec;ts for the month of September. Seasonal patterns are not all that common phenomena in the stock market, and September possesses a somewhat unusual one. That pattern is somewhat at variance with our current view of the market's technical posi- tion. The major market averages reached their last recorded high back in mid-July. WIth the Dow at 1359.54 on July 19. A subsequent low was attained a month later on August 19 at 1312.50. Since that time the market has fIrmed without being able to mount any truly convincing sort of a rally. Thursday's close of 1335.12 having recovered just under half of the ground lost. Our own current view of market action is that an effective short-term low was probably reached two weeks ago. and recent dull pre-Labor-Day markets have constltuted a basing perIOd preparatory to a further attempt. likely to be successful at new highs. We outlined some of the reasons for this thinking in last week's letter. If one looks at the September seasonal pattern. however, it may well be that the scenario we envision may be pushed further forward in time. In summary. the month of September. as we have pomted out in the past. possesses. for whatever reason. a statistically significant downward bias. In the 59 years. or 708 months. be- tween 1926 and 1984. the market has advanced m September 23 times and declined 36 times. The average market performance for the 59 Septembers in question was a . decline of 1. 31. by far the worst record for any of the 12 months. It is the only month (May is the other) which has had more declining instances than advancing ones over the past 59 years. The declines in question are not notable for their severity. The two worst. not surpris- ingly. occurred in 1930 and 1931. with 15 and 31 drops. The worst recent instance was 1974 with a 10 decline. There have. however. been relatively few good Septembers. WIth a 13.5 rise in 1939 being the best performance. When examining any historical record like this one. it is always impossible to say. with 1-I-.clceo;r.1taln.1YJ whether or.noLit is a chance. phenomenon. .Standard. statistical testing, instead, de- votes itself to determining how likely it is that such a manifestation could be a random event. In the present case. application of such testing proceeds as follows. Over 708 months the Dow has risen 399 times. or 56 of the time .and has declined 309 times. We could simulate this historical record by placing 399 white marbles and 309 black marbles in a jar and mixing them thoroughly. Suppose we were then blmdly to draw a sample of 59 marbles out of the jar. representing 59 Septembers. The question is what would be the probabIlity of that sample's containing 23 or fewer white marbles. That probabIlity can be calculated. and it is considerably less than one chance in one hundred. On this basis. the September seasonal record must be considered significant. Oddly enough. the record seems consistent in both bull-and-bear- market years. Applying hindsight. 45 of the 59 years can be identified as having occurred durmg bull markets with 14 of the years having been bear markets. September was a down month in 10 of the 14 bear-market years. not a particularly astonishing result. However. of the 45 Septembers now known to have occurred during bull markets. 26. or 58. showed declines for the month. What is especially interesting about this September-decline tendency is that it appears to have intensified in recent history. Seven of the last eight Septembers. going back to 1977. have been down months. the only exception being 1983. Despite the great bull-market takeoff in August. 1982. a September consolidation period produced a mild decline for that month. Going a bit further back .there have been only three rising Septembers in the 16 years since 1969. Due to the smaller sample and the markets greater downward bias over that period. this result is no more significant than the overall record .but it is. certainly. consistent with it. While it is certainly within the scope of this letter to comment on such phenomena as this — along with such similar cases as the even-more-prevalent December rally — we have never considered seasonality so important as to be a maJor determinant of appropriate investment polIcy. That policy should, at this time, we think, remain positive as regards equitlS.'- – – ——. AWTrs ANTHONY W. TAB ELL DELAFIELD. HARVEY. TABELL IN C. Dow-Jones Industrials (12 00 p. m.) S & P Composite (1200 p.m.) Cumulative Index (8/29/85) 1330.53 188.03 2601.90 No statement or CJI'preSSlon 01 OPinion Of any other matter herem contained IS, or IS to be deemed \0 be, directly or Indirectly. an offer or Ihesoitcltatlon of an oHer to blJy or sell any secunty referred 10 or mentioned The mlilter IS presonlf'd merely fortheconvcnlence of tho UbSCliber While we believe the sources of our ,nformation 10 be reliable we In no way represent or guarantee the accuracy thereof nor of the statements made herem Any actton to be taken by the subSCriber should be based on his own mvestlgatlon and mlormatlon Delafield Harvey Tabett Inc as a corporation anCilts ollicers or employees may now have, or may laler take, pOSitions or trades In respect 10 any securities mentioned In thiS or any future ISSUe, and such POSition may be diliert'nl from any Iews now or heroafter expressed In thiS or any other Issue Delafletd, Harvey Tabell Inc, which IS registered With tM SECas an mvestment adYlsor, may give advice tolls mveslmMt adViSOry and other customers rndependenl1y 01 any statements made m thiS or In any other Issue Further Information on any security mentioned hi;lrem IS available on reQuest