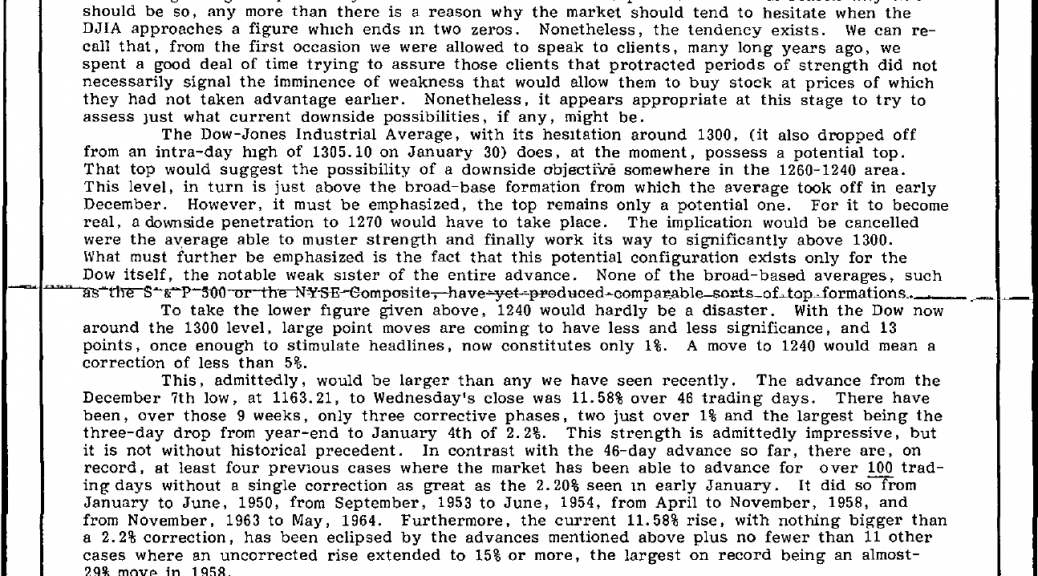 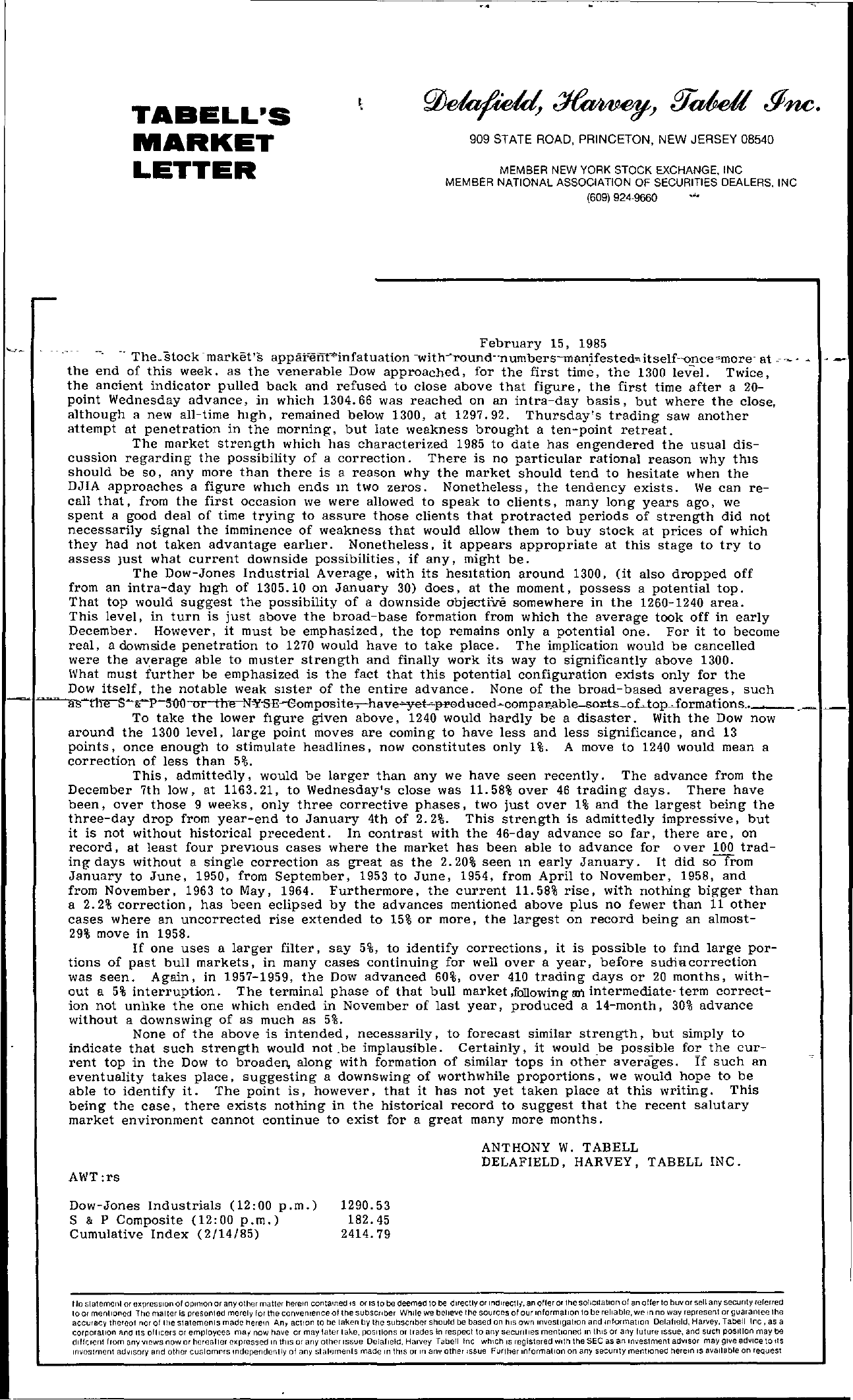 TABELL'S MARKET LETTER 909 STATE ROAD. PRINCETON, NEW JERSEY 08540 MEMBER NEW YORK STOCK EXCHANGE. INC MEMBER NATIONAL ASSOCIATION OF SECURITIES DEALERS. INC (609) 924-9660 ' February 15, 1985 -. Thestock -market's apparefftinfatuation -with–round–numbers-manifested-itself–oncemore- at -.,.,. .. the end of this week. as the venerable Dow approached, for the first time, the 1300 level. Twice, the ancient indicator pulled back and refused to close above that figure, the first time after a 20point Wednesday advance, in which 1304.66 was reached on an intra-day basis, but where the close. although a newall-time hIgh, remained below 1300, at 1297.92. Thursday's trading saw another attempt at penetration in the morning, but late weakness brought a ten-point retreat. The market strength which has characterized 1985 to date has engendered the usual discussion regarding the possibility of a correction. There is no particular rational reason why thlS should be so, any more than there is a reason why the market should tend to hesitate when the DJIA approaches a figure WhICh ends m two zeros. Nonetheless, the tendency exists. We can re- call that. from the first occasion we were allowed to speak to clients. many long years ago. we spent a good deal of time trying to assure those clients that protracted periods of strength did not necessarily signal the imminence of weakness that would allow them to buy stock at prices of which they had not taken advantage earher. Nonetheless. it appears appropriate at this stage to try to assess Just what current downside possibilities, if any, might be. The Dow-Jones Industrial Average. with its hesItation around 1300. (it also dropped off from an intra-day hIgh of 1305.10 on January 30) does, at the moment, possess a potential top. That top would suggest the possibility of a downside objective somewhere in the 1260-1240 area. This level, in turn is just above the broad-base formation from which the average took off in early December. However, it must be emphasized, the top remains only a potential one. For it to become real, a downside penetration to 1270 would have to take place. The implication would be cancelled were the aerage able to muster strength and finally work its way to significantly above 1300. What must further be emphasized is the fact that this potential configuration exists only for the Dow itself, the notable weak SIster of the entire advance. None of the broad-based averages, such I-a'sme-S-&-P-SOO 01 tIle N'Y-s-E–Gomposite-,–haveryetl'l'0dced-comparable-so-tsoftapJoI'nlations. To take the lower fIgure given above, 1240 would hardly be a disaster. With the Dow now around the 1300 level, large point moves are coming to have less and less significance. and 13 points. once enough to stimulate headlines, now constitutes only 1. A move to 1240 would mean a correction of less than 5. This, admittedly, would be larger than any we have seen recently. The advance from the December 7th low, at 1163.21. to Wednesday's close was 11. 58 over 46 trading days. There have been. over those 9 weeks. only three corrective phases. two just over 1 and the largest being the three-day drop from year-end to January 4th of 2.2. This strength is admittedly impressive, but it is not without historical precedent. In contrast with the 46-day advance so far, there are, on record, at least four prevIOUS cases where the market has been able to advance for over 100 trading days without a single correction as great as the 2.20 seen m early January. It did so from January to June, 1950, from September, 1953 to June, 1954. from April to November. 1958, and from November, 1963 to May, 1964. Furthermore, the current 11.58 rise, with nothing bigger than a 2.2 correction. has been eclipsed by the advances mentioned above plus no fewer than 11 other cases where an uncorrected rise extended to 15 or more. the largest on record being an almost29 move in 1958. If one uses a larger filter, say 5, to identify corrections. it is possible to fmd large portions of past bull markets, in many cases continuing for well over a year, before sudiacorrection was seen. Again, in 1957-1959. the Dow advanced 60, over 410 trading days or 20 months, with- out a 5 interruption. The terminal phase of that bull market .fullowing an intermediate- term correction not unllke the one which ended in November of last year, produced a 14-month, 30 advance without a downswing of as much as 5. None of the above is intended, necessarily, to forecast similar strength, but simply to indicate that such strength would not be implausible. Certainly, it would be possible for the current top in the Dow to broaden, along with formation of similar tops in other averages. If such an eventuality takes place, suggesting a downswing of worthwhile proportions, we would hope to be able to identify it. The point is. however, that it has not yet taken place at this writing. This being the case, there exists nothing in the historical record to suggest that the recent salutary market environment cannot continue to exist for a great many more months. AWTrs ANTHONY W. TABELL DELAFIELD. HARVEY, TABELL INC. Dow-Jones Industrials (12 00 p. m.) S & P Composite (1200 p.m.) Cumulative Index (2/14/85) 1290.53 182.45 2414.79 t Jo statement or cpfesslon of opmlon Of any other matter herein contained IS or IS to be deemed 10 be directly or Indlrectt!, an offer or the soliCitation of an offer 10 buy or sell any security referred tOOl mentioned The mal1cr ts presenlOd merety for Ihe convenience a! thesubSCrrber While we believe the sources of our Information 10 be rellabte, we In no way represent orguaral\lee the accuracy thereof nor of Ille statements made herem An) action to be taken by the subSCriber Should be based on hiS own Investlgallon and mlormatlon Defafleld, Harvey, Tabell Inc, as a corporation lind 115 officers or employeeS may now have or may later tahe, posl1\ons or trades In respect to any securities mentioned In thiS Of any lutule Issue, and such pOSItion may be dllfcrenl from anyvlflws now or hmeatter epressed m thiS or any other Issue Delafield, Harvey Tabelt Inc which IS regtstered Wllh the SEC as an Investment adVisor may give adVice to rls Invcstment adVisory and othor customf'ls Independently of any slal'-Jments made rnlhls or In any other Issue Further Information on an security mentioned herein IS avallabte on request