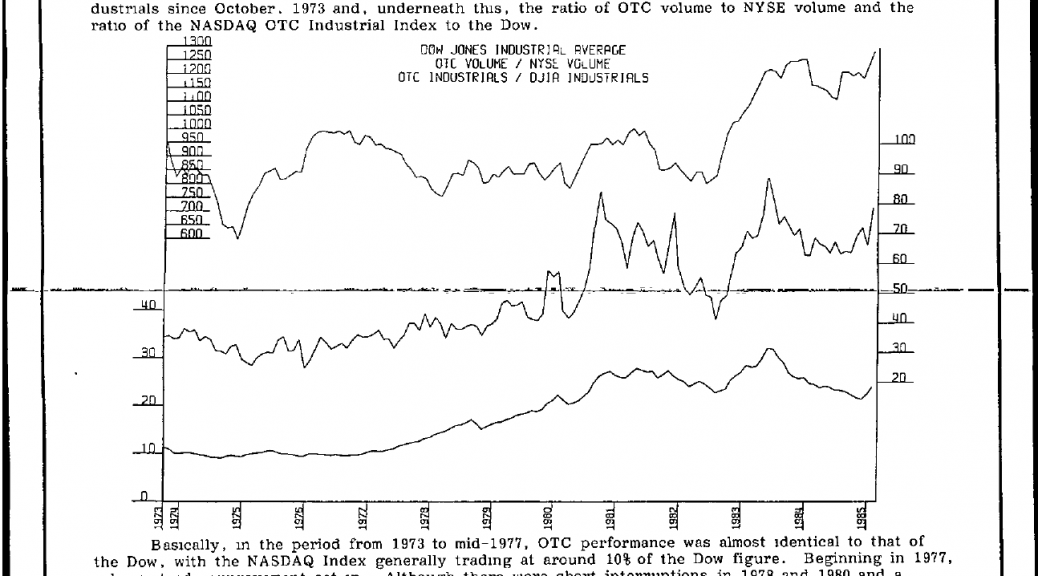 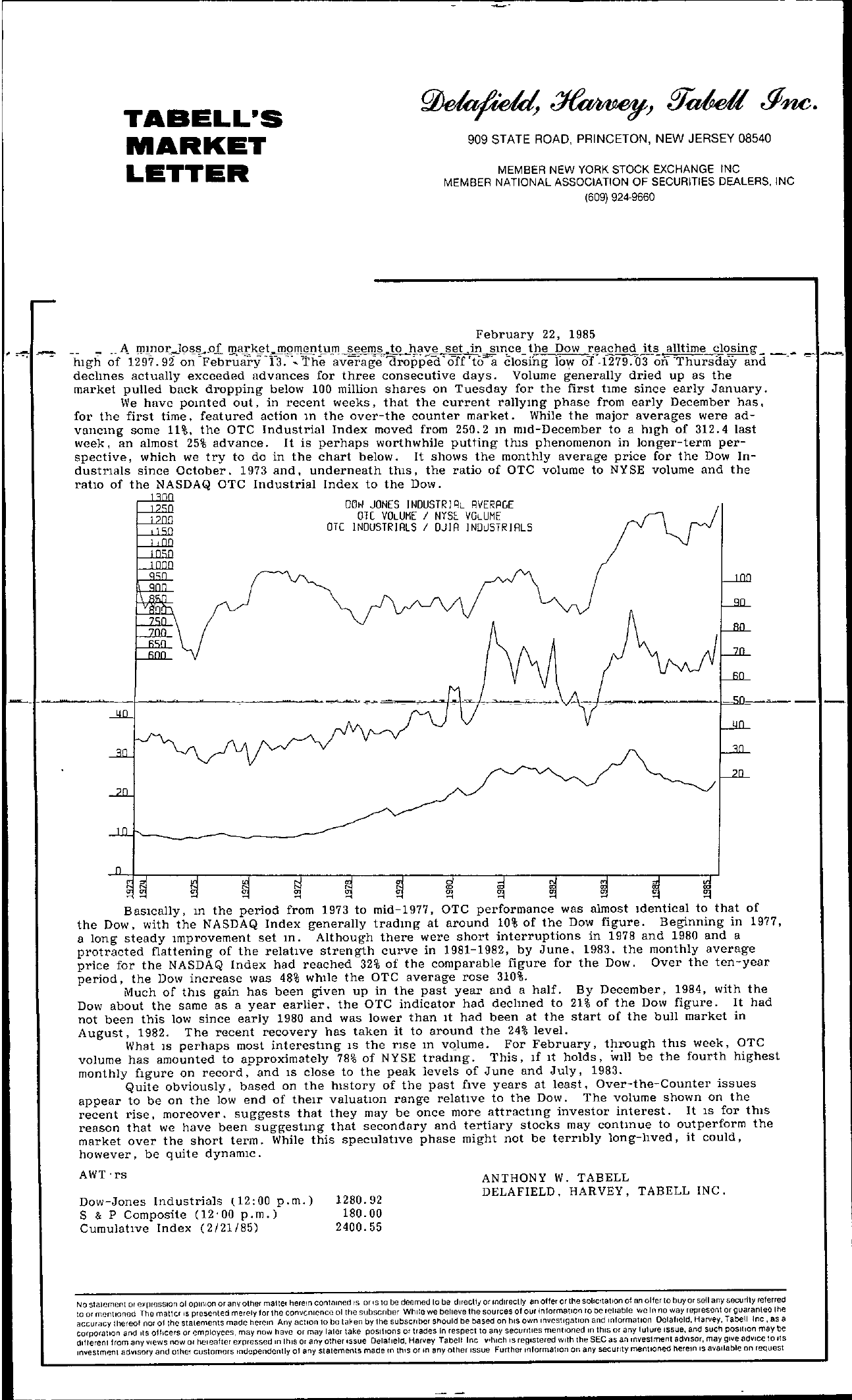 ,———————————————————————– – – – – – TABELL'S MARKET LETTER 909 STATE ROAD, PRINCETON, NEW JERSEY 08540 MEMBER NEW YORK STOCK EXCHANGE INC MEMBER NATIONAL ASSOCIATION OF SECURITIES DEALERS, INC (609) 924-9660 February 22, 1985 H A. ro!!10t.'J9-o-oL g!.ark..ekt'QJ!l1.!uq-e..!o J.y st ,iJm,-ce ,he Iow !.ahe E .lltime.-J;ling – hIgh of 129792 on February 13. The average dropped off to a closmg low of -1279.03 on -Thursaay and declmes actually exceeded advances for three consecutive days. Volume generally dried up as the market pulled back dropping below 100 million shares on Tuesday for the first tIme since early January. We have pomted out, in recent weeks, that the current rallymg phase from early December has. for the first time. featured action 1n the over-the counter market. While the major averages were ad- VaIIClng some 11. the aTe Industrial Index moved from 250.2 In mId-December to a hIgh of 312.4 last week, an almost 25 advance. It is perhaps worthwhile putting thIS phenomenon in longer-term perspective, which we try to do in the chart below. It shows the monthly average price for the Dow Industrials since October. 1973 and. underneath thIS, the ratio of OTC volume to NYSE volume and the raho of the NASDAQ OTC Industrial Index to the Dow. DOw JONES INDUSTRIQL RVERRGE OTC VOLUME / NYSc VGLUME OTC INDUSTRIRLS / DJIR INDuSTRIRLS – – —–I– ro BasIcally. In the period from 1973 to mid-1977. OTC performance was almost Identical to that of the Dow, with the NASDAQ Index generally tradmg at around 10 of the Dow figure. Beginning in 1977, a long steady Improvement set In. Although there were short interruptions in 1978 and 1980 and a protracted flattening of the relatIve strength curve in 1981-1982, by June. 1983. the monthly average price for the NASDAQ Index had reached 32 of the comparable figure for the Dow, Over the ten-year period. the Dow increase was 48 whIle the OTe average rose 310. Much of thIS gain has been given up in the past year and a half. By December, 1984. with the Dow about the same as a year earlier. the DTC indicator had dechned to 21 of the Dow figure. It had not been this low since early 1980 and was lower than It had been at the start of the bull market in August, 1982. The recent recovery has taken it to around the 24 level. What IS perhaps most interestIng IS the rlse In vQlume. For February. through thIS week, OTC volume has amounted to approximately 78 of NY SE tradmg. This. If It holds, v.nIl be the fourth highest monthly fIgure on record. and IS close to the peak levels of June and July, 1983. Quite obviously, based on the hIstory of the past fIve years at least. Over-the-Counter issues appear to be on the low end of theIr valuatIOn range relatIve to the Dow. The volume shown on the recent rise, moreover. suggests that they may be once more attractIng investor interest. It IS for thIS reason that we have been suggestIng that secondary and tertiary stocks may contInue to outperform the market over the short term. While this speculatIve phase might not be terrIbly long-hved. it could. however. be quite dynamIc. AWT'rs Dow-Jones Industrials (1200 p.m.) S & P CompOSite (12'00 p.m.) Cumulahve Index (2/21/85) 1280.92 180.00 2400.55 ANTHONY W. TABELL DELAFIELD. HARVEY, TABELL INC, NO stalement Of epreSSlon 01 opll\lon or anv other maller herem contained IS Of IS 10 be deemed 10 be dlfect1f or indirectly an offer or Ihe soliCItation 01 an olfer 10 buy or sell any security referred to or mentioned The matter is presented merely lor the convenience 01 the subSCriber While we believe the sources 01 our Inlormatlon to be relrable we In no way represent or guaranlee Ihe accuracy Ihereof nor 01 the statements made herem Any action to be taen bylhe subSCriber should be based on hiS own investigation and mlormatlon Oelalleld, Harvey, Tabell Inc, as a corporation and Its officers or employees, may now have or may later take posillons or trades In respect to any securities mentioned m thiS Of any future Issue, and such POSition may be dliferenllrom any views n.ow 01 hClealler epressed In Ihls or any other Issue Oelalleld, Harvey Tabell Inc v'hlch IS registered With the SEC as an mveSlment adVISor, may give advice to liS mvestm'3nt adVisory and other customers Independently 01 any statements made m thiS or In any other ISSue Further mlormatlon on any security mentioned herem IS available on reQuost