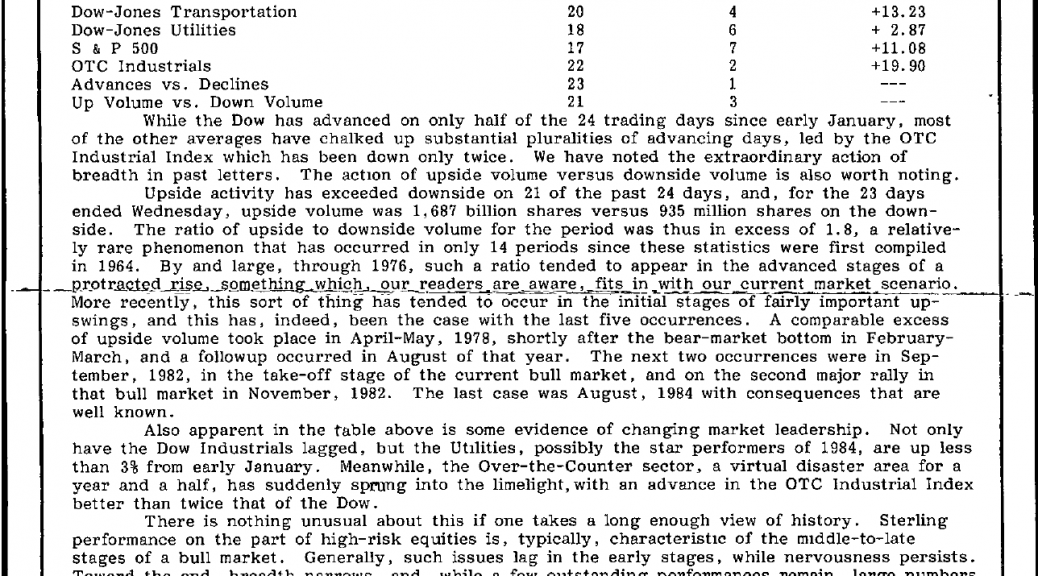 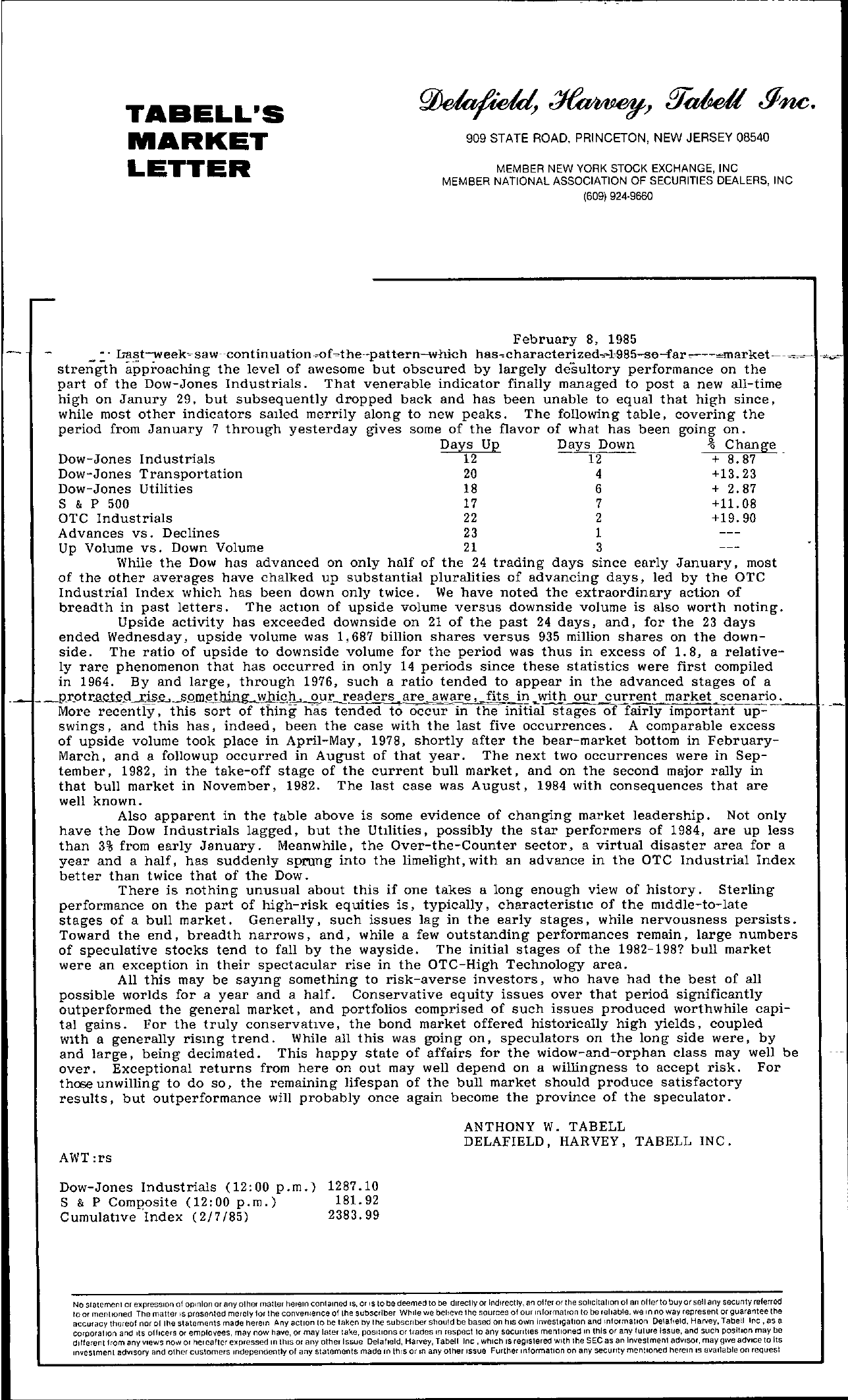 TABELL'S MARKET LETTER 909 STATE ROAD, PRINCETON, NEW JERSEY 08540 MEMBER NEW YORK STOCK EXCHANGE, INC MEMBER NATIONAL ASSOCIATION OF SECURITIES DEALERS, INC (609) 924-9660 February 8, 1985 – Lt-.weeksaw–continuation …ofthe–pattern-whi-ch has-characterized.,….1985-so-far'—market—- strength approaching the level of awesome but obscured by largely desultory performance on the part of the Dow-Jones Industrials, That venerable indicator finally managed to post a newall-time high on Janury 29, but subsequently dropped back and has been unable to equal that high since, while most other indicators salled merrily along to new peaks, The following table, covering the period from January 7 through yesterday gives some of the flavor of what has been going on, Days Up Days Down – Change Dow-Jones Industrials 12 12 8.87 Dow-Jones Transportation 20 4 13.23 Dow-Jones Utilities 18 6 2,87 S & P 500 17 7 11. 08 OTC Industrials 22 2 19.90 Advances vs. Declines 23 1 Up Volume vs, Down Volume 21 3 While the Dow has advanced on only half of the 24 trading days since early January, most of the other averages have chalked up substantial pluralities of advancing days, led by the OTC Industrial Index which has been down only twice, We have noted the extraordinary action of breadth in past letters, The actIOn of upside volume versus downside volume is also worth noting. Upside activity has exceeded downside on 21 of the past 24 days, and, for the 23 days ended Wednesday, upside volume was 1,687 billion shares versus 935 million shares on the down- side, The ratio of upside to downside volume for the period was thus in excess of 1. 8, a relative- ly rare phenomenon that has occurred in only 14 periods since these statistics were first compiled in 1964, By and large, through 1976, such a ratio tended to appear in the advanced stages of a pr9trJl.ct.e1iJ4;.e…SQIll.ething whiu!,-,,eaders are aware, fits in with our current market scenario-,–. I More recently, this sort of thing has tended to occur in the initial stages of fairly important up- swings, and this has, indeed, been the case with the last five occurrences. A comparable excess of upside volume took place in April-May, 1978, shortly after the bear-market bottom in February- March, and a follow up occurred in August of that year. The next two occurrences were in Sep- tember, 1982, in the take-off stage of the current bull market, and on the second major rally in that bull market in November, 1982. The last case was August, 1984 with consequences that are well known. Also apparent in the table above is some evidence of changing market leadership. Not only have the Dow Industrials lagged, but the UtIlities, possibly the star performers of 1984, are up less than 3 from early January. Meanwhile, the Over-the-Counter sector, a virtual disaster area for a year and a half, has suddenly sprung into the limelight, with an advance in the OTC Industrial Index better than twice that of the Dow. There is nothing unusual about this if one takes a long enough view of history. Sterling performance on the part of high-risk equities is, typically, characteristIc of the mIdd1e-to-1ate stages of a bull market. Generally, such issues lag in the early stages, while nervousness persists. Toward the end, breadth narrows, and, while a few outstanding performances remain, large numbers of speculative stocks tend to fall by the wayside. The initial stages of the 1982-198 bull market were an exception in their spectacular rise in the OTC-High Technology area. All this may be saymg something to risk-averse investors, who have had the best of all possible worlds for a year and a half. Conservative equity issues over that period significantly outperformed the general market, and portfolios comprised of such issues produced worthwhile capi- tal gains. For the truly conservatIve, the bond market offered historically high yields, coupled wIth a generally rismg trend, While all this was going on, speculators on the long side were, by and large, being decimated. This happy state of affairs for the widow-and-orphan class may well be over. Exceptional returns from here on out may well depend on a willingness to accept risk. For those unwilling to do so, the remaining lifespan of the bull market should produce satisfactory results, but outperformance will probably once again become the province of the speculator. AWT rs ANTHONY W. TABELL DELAFIELD, HARVEY, TABELL INC. Dow-Jones Industrials (1200 p.m.) 1287.10 S & P Composite (12 00 p, m. ) 181. 92 CumulatIVe 'Index (2/7/85) 2383.99 NO statement or expreSSion of opmlon or My other matter herein contained IS, or IS \0 be deemed to be dlfccllyor Indirectly, an o1!er or the solicitation 01 an ofler to buyer sell any secunly referred loor mentioned The matter IS prrlsanted merely 101 the convemence of the subscriber White we behee the sources of our mforma\lon to be reliable, we In no way represent or guarantee Ihe accuracy thereof nor of Ihe statements made herem Any action 10 be taken by the SUbSCflber should be based on hiS own Inestlgatlon and mformaiion Delafield, Harvey, Tabell Inc, as a corporation and Its oilicers or emplovees, may now have, or may later take, pOSitions or trades In respect 10 any securities mentioned In this or any future Issue, and such positron may be dllferent Irom any views now or hereafter epressed In this or any other Issue Delafield, Harvey, Tabell Inc, which IS registered with the SEC as an Investment adlsor, may give advice to Its Investment adVISOry and other customers Independently of any statements made In thiS or In any other Issue Further mformatlon on any securrty mentioned herem IS available on reQuest