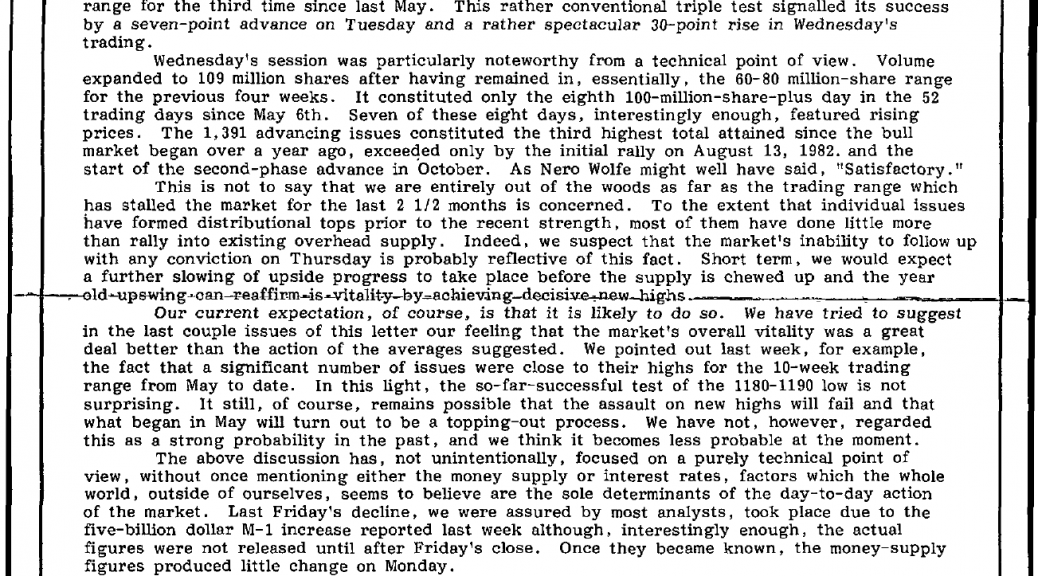 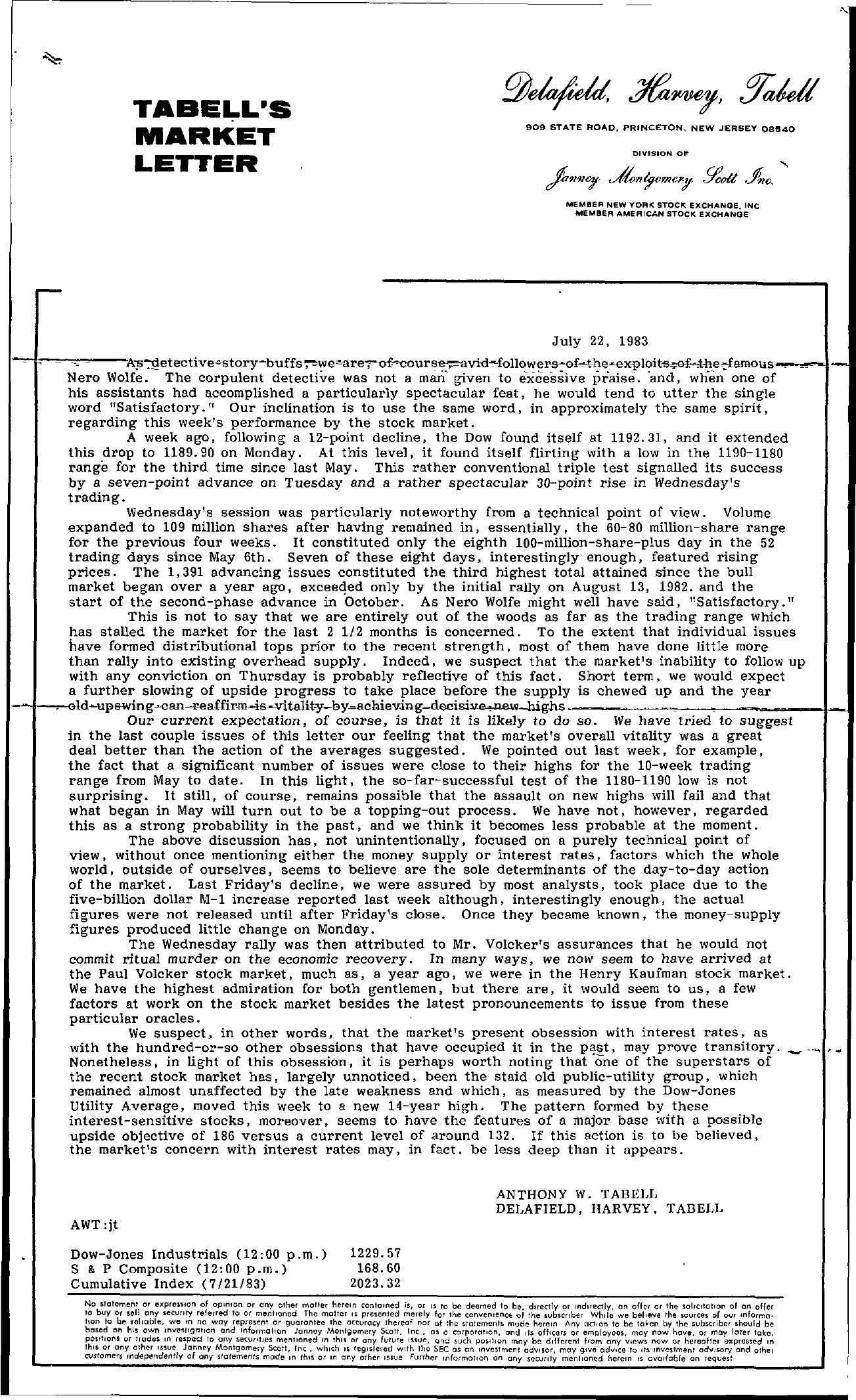 TABELL'S MARKET LETTER 909 STATE ROAD, PRINCETON, NEW JERSEY 08S4Q DIVISION OF MEMBER NEW YORK STOCK EXCHANGe, INC MEMBER AMEFlICAN STOCK EXCHA.NOe July 22, 1983 I-'.''-AS-Qetectivestory-buffsweareiofcourseavii-followers–of..,.the–exiloit.,of4het-famous–…,…..II Nero Wolfe. The corpulent detective was not a ma.n- given to excessive praise. ane!, when one of his assistants had accomplished a particularly spectacular feat, he would tend to utter the single word Satisfactory. Our inclination is to use the same word, in approximately the same spirit, regarding this week's performance by the stock market. A week ago, following a 12-point decline, the Dow found itself at 1192.31, and it extended this drop to 1189.90 on Monday. At this level, it found itself flirting with a low in the 1190-1180 range for the third time since last May. This rather conventional triple test signalled its success by a seven-point advance on Tuesday and a rather spectacular 3D-point rise in Wednesday's trading. Wednesday's session was particularly noteworthy from a technical point of view. Volume expanded to 109 million shares after having remained in, essentially, the 60-80 million-share range for the previous four weeks. It constituted only the eighth 100-million-share-plus day in the 52 trading days since May 6th. Seven of these eight days, interestingly enough, featured rising prices. The 1,391 advancing issues constituted the third highest total attained since the bull market began over a year ago, exceecjed only by the initial rally on August 13, 1982. and the start of the second-phase advance in October. As Nero Wolfe might well have said, Satisfactory. This is not to say that we are entirely out of the woods as far as the trading range Which has stalled the market for the last 2 1/2 months is concerned. To the extent that individual issues have formed distributional tops prior to the recent strength, most of them have done little more than rally into existing overhead supply. Indeed, we suspect that the market's inability to fOllow up with any conviction on Thursday is probably reflective of this fact. Short term, we would expect a further slowing of upside progress to take place before the supply is chewed up and the year I 1–f–,–Gldupswingcan-r-eaffirm-isvitaJit.Y-byacllieving-decisi\Ie.enew–highs.——- Our current expectation, of course, is that it is likely to do so. We have tried to suggest in the last couple issues of this letter our feeling that the market's overall vitality was a great deal better than the action of the averages suggested. We pOinted out last week, for example, the fact that a significant number of issues were close to their highs for the 10-week trading range from May to date. In this light, the so-far-successful test of the 1180-1190 low is not surprising. It still, of course, remains possible that the assault on new highs will fail and that what began in May will turn out to be a topping-out process. We have not, however, regarded this as a strong probability in the past, and we think it becomes less probable at the moment. The above discussion has, not unintentionally, focused on a purely technical point of view, without once mentioning either the money supply or interest rates, factors which the whole world, outside of ourselves, seems to believe are the sole determinants of the day-to-day action of the market. Last Friday's decline, we were assured by most analysts, took place due to the five-billion dollar M-1 increase reported last week although, interestingly enough, the actual figures were not released until after Friday's close. Once they became known, the money-supply figures produced little change on Monday. The Wednesday rally was then attributed to Mr. Volcker's assurances that he would not commit ritual murder on the economic recovery. In many ways, we now seem to have arrived at the Paul Volcker stock market, much as, a year ago, we were in the Henry Kaufman stock market. We have the highest admiration for both gentlemen, but there are, it would seem to us, a few factors at work on the stock market besides the latest pronouncements to issue from these particular oracles. We suspect, in other words, that the market's present obsession with interest rates, as with the hundred-or-so other obsessions that have occupied it in the past, may prove transitory. . '. Nonetheless, in light of this obsession, it is perhaps worth noting that 'one of the superstars of the recent stock market has, largely unnoticed, been the staid old public-utility group, which remained almost unaffected by the late weakness and which, as measured by the Dow-Jones Utility Average, moved this week to a new 14-year high. The pattern formed by these interest-sensitive stocks, moreover, seems to have the features of a major base with a possible upside objective of 186 versus a current level of around 132. If this action is to be believed, the market's concern with interest rates may, in fact. be less deep than it appears. AWTj ANTHONY W. TABELL DELAFIELD, HARVEY, TAB ELL Dow-Jones Industrials (1200 p.m.) S & P Composite (1200 p.m.) Cumulative Index (7/21/83) 1229.57 168.60 2023.32 No slCltl!ment or expression of opinion or any olner motter hercln contolned Is, or IS 10 be deemed to be, dHEctfv or Indirectly, on offar or the SoilCllotlon of on offer to buy or sell ony security referred to or mentioned The matler IS presented merely for the convenlenc 01 the subscriber While we believe the sources of our tnfOrmohon 10 be relloble, we In no way represent or guarantee the accuracy thereof nor of the statements mJde herem Any Ocllon to be loen by the subscriber should be bosed on his own investigation and Informailon Janney Montgomery Scon, Inc, as a corporation, and liS officers or employccs, may now have, or may later take, pOSitions or trades In respect to any seCUrftles mentioned In thiS or any future Issue, and such pos!ilon may be different frOm any views now Or hereafter expressed In thiS or any other luue Janney Montgomery Scott, Inc, which IS reglslered With Ihe SEC as an Investment adVisor, may give adVIce 10 Its Investment adVISOry and olhel CVtomcr rndependently of any statements made rn thiS or rn any other Issue furiher information on any securrty menllaned herein IS avarlable on request