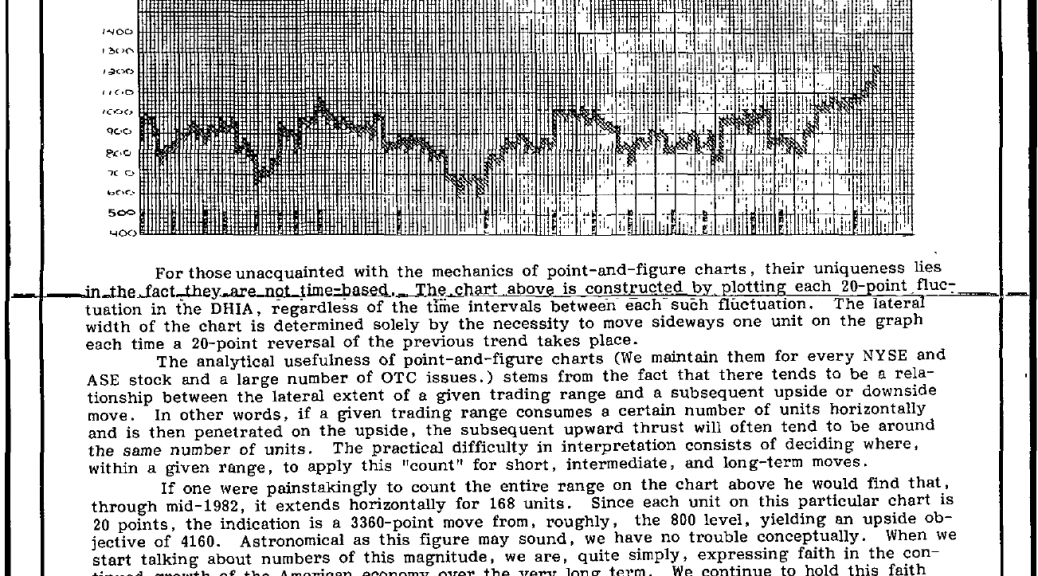 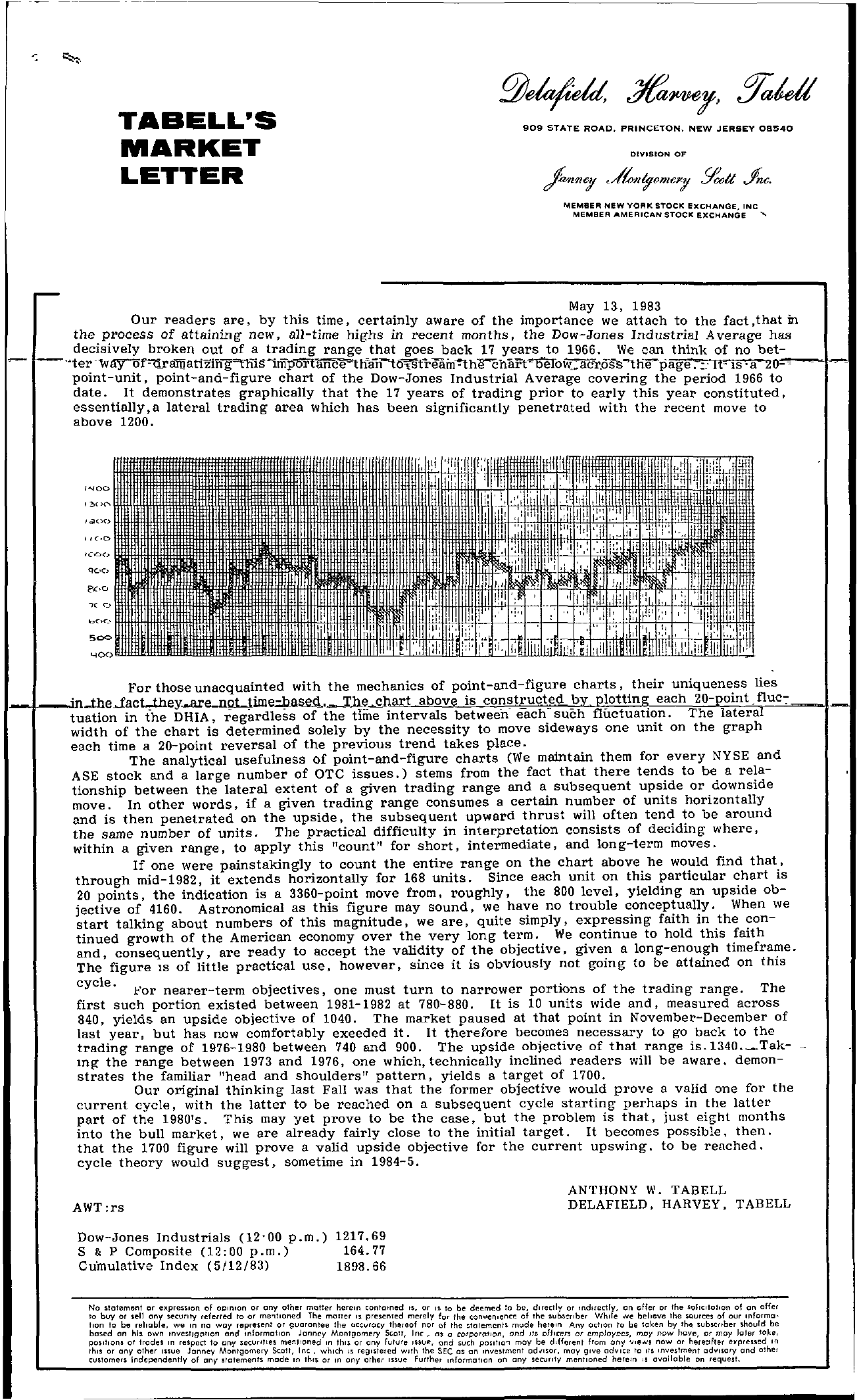 TABELL'S MARKET LETTER 909 STATE ROAD, PRINCETON. NEW JERSEY 08540 DIVISION OF MEMBER NEW YOAK STOCK EXCHANGE, INC MEMBER AMERICAN STOCIC EXCHANGE ….. May 13, 1983 Our readers are, by this time, certainly aware of the importance we attach to the fact ,that in the process of attaining new, all-time highs in recent months, the Dow-Jones Industrial Average has decisively broken out of a trading range that goes back 17 years to 1966. We can think of no bet- ..te'lITf'iratizihllig-imj5Ortancetnah-t63tIeainthech1i.rtOeloW-'r.iiSs-thepage. It- is''a20'''-'''—!f-.-. pomt-umt, pomt-and-flgure chart of the Dow-Jones Industrial Average covering the period 1966 to date. . It demonstrates graphically that the 17 years of trading prior to early this year constituted, essentlally,a lateral trading area which has been significantly penetrated with the recent move to above 1200. For those unacquainted with the mechanics of point-and-figure charts, their uniqueness lies 1–11-..111 ..theJactey…arEl-Ilime..\las..,..JJlehart above is constructed by plotting each 20-point f1uc tuation in the DHIA, regardless of the time intervals between each-such fluctuation. The lateral width of the chart is determined solely by the necessity to move sideways one unit on the graph each time a 20-point reversal of the previous trend takes place. The analytical usefulness of point-and-figure charts (We maintain them for every NYSE and ASE stock and a large number of OTC issues.) stems from the fact that there tends to be a relationship between the lateral extent of a given trading range and a subsequent upside or downside move. In other words, if a given trading range consumes a certain number of units horizontally and is then penetrated on the upside, the subsequent upward thrust will often tend to be around the same number of units. The practical difficulty in interpretation consists of deciding where, within a given range, to apply this counttl for short, intermediate, and long-term moves. If one were painstakingly to count the entire range on the chart above he would find that, through mid-1982, it extends horizontally for 168 units. Since each unit on this particular chart is 20 points, the indication is a 3360-point move from, roughly, the 800 level, yielding an upside objective of 4160. Astronomical as this figure may sound, we have no trouble conceptually. When we start talking about numbers of this magnitude, we are, quite simply, expressing faith in the continued growth of the American economy over the very long term. We continue to hold this faith and, consequently, are ready to accept the validity of the objective, given a long-enough timeframe. The figure IS of little practical use, however, since it is obviously not going to be attained on this cycle. for nearer-term objectives, one must turn to narrower portions of the trading range. The first such portion existed between 1981-1982 at 780-880. It is 10 units wide and, measured across 840, yields an upside objective of 1040. The market paused at that point in November-December of last year, but has now comfortably exeeded it. It therefore becomes necessary to go back to the trading range of 1976-1980 between 740 and 900. The upside objective of that range is 1340.Tak- mg- the range between 1973 and 1976, one which, technically inclined readers will be aware. demonstrates the familiar head and shoulders pattern, yields a target of 1700. Our original thinking last Fall was that the former objective would prove a valid one for the current cycle, with the latter to be reached on a subsequent cycle starting perhaps in the latter part of the 1980's. This may yet prove to be the case, but the prOblem is that, just eight months into the bull market, we are already fairly close to the initial target. It becomes possible, then. that the 1700 figure will prove a valid upside objective for the current upswing, to be reached, cycle theory would suggest, sometime in 1984-5. AWTrs ANTHONY W. TABELL DELAFIELD, HARVEY, TAB ELL Dow-Jones Industrials (12'00 p.m.) 1217.69 S & P Composite (1200 p.m.) 164.77 Cu'mulative Index (5/12/83) 1898.66 No statement or expressIon of opInIon or cny olher motter herem contolned IS, or IS 10 be deemed 10 be, directly or indIrectly, on oHer or the sollclloloon of on cffer 10 buy or sell cny security referred 10 or me'llloned The molter IS presenled merely for the convenIence of the subscrIber While Ne believe the .Clurees of our ..,formatIon 10 be rellcble, we In no way represent or guarantee the accurocy thereof nor of the Iotement mud!! herein Any odlon to be token by Ihe subscflber should be hosed on his own Investlgotlon cnd mformollon Jenney Montgomery Scott, Inc, as a COfporotlon, cnd olllcers or employees, may now hove, or may Joler loke, POSitions or trodes In reSpect loony secUrities mentioned In thiS or ony future Issue, ond such POSltIO'1 may be different from ony VleoNS now or hereafter el'pressed III thiS or ony other Inue Janney Montgomery Scott, Inc, which IS registered With the SEC as on Investment ad150r, moy give adVice to Its II'lvestment odVlsory and othel customers Independently of any statements mode In thl or 11'1 any other IS5ve fVflher Information on any securrty mentioned herem IS avoiloble on request,