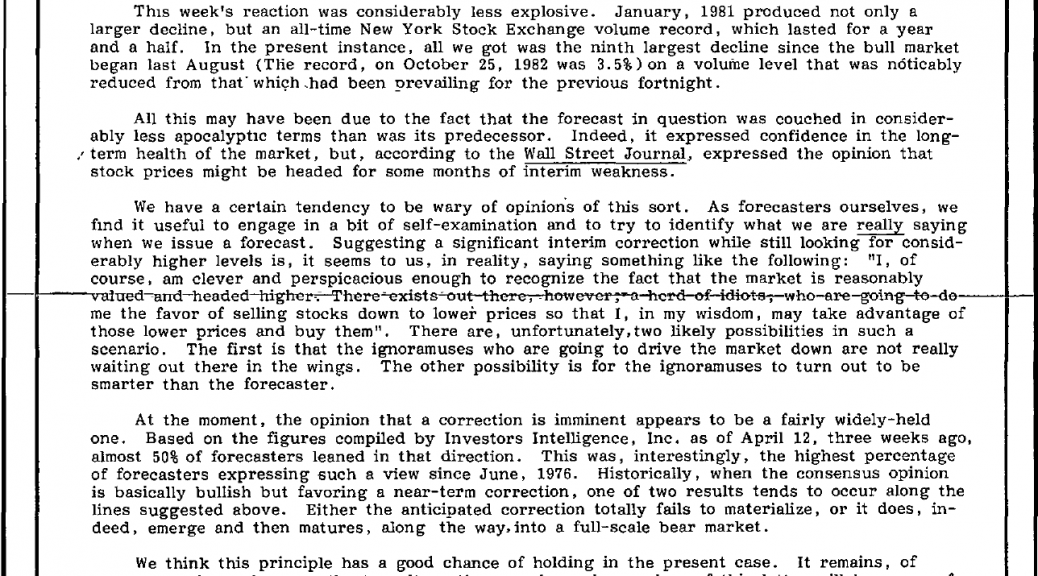 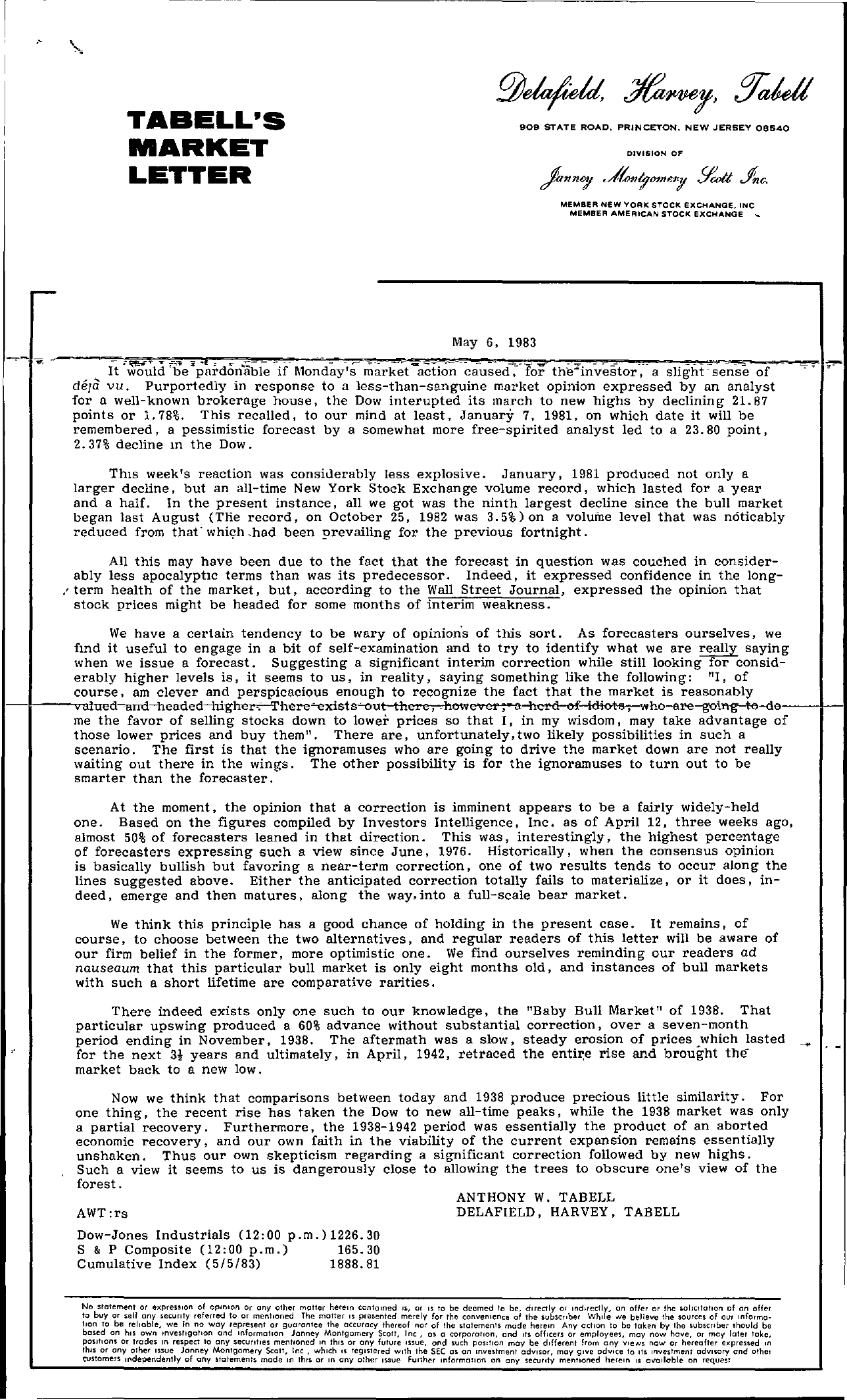 I I TABELL'S MARKET LETTER 909 STATE ROAD, PRINCETON, NEW JERSEY OB540 DIVISION OF MEMBER NEW VORK STOCk eXCHANGE. INC MEMBER AMERICAN STOCK EXCHANGe …. May 6, 1983 ———–,..i-.-i-r.——–'-,–c—'—07-;————I It would 'be pardonable if Monday's market action caused for the-investor, a slight -sense of deja vu. Purportedly in response to a less-than-sanguine market opinion expressed by an analyst for a well-known brokerage house, the Dow interupted its march to new highs by declining 21. 87 points or 1. 78. This recalled, to our mind at least, January 7, 1981, on which date it will be remembered, a pessimistic forecast by a somewhat more free-spirited analyst led to a 23.80 point, 2.37 decline m the Dow. Th,S week's reaction was consiLlerably less explosive. January, 1981 produced not only a larger decline, but an all-time New York Stock Exchange volume record, which lasted for a year and a half. In the present instance, all we got was the ninth largest decline since the bull market began last August (Tlie record, on October 25, 1982 was 3.5) on a volullle level that was noticably reduced from that' whi;h .had been OJrevailing for the previous fortnight. All this may have been due to the fact that the forecast in question was couched in considerably less apocalyptlC terms than was its predecessor. Indeed, it expressed confidence in the long.' term health of the market, but, according to the Wall Street Journal, expressed the opinion that stock prices might be headed for some months of interim weakness. We have a certain tendency to be wary of opinion's of this sort. As forecasters ourselves, we fmd it useful to engage in a bit of self-examination and to try to identify what we are really saying when we issue a forecast. Suggesting a significant interim correction while still looking for considerably higher levels is, it seems to us, in reality, saying something like the following I, of course, am clever and perspicacious enough to recognize the fact that the market is reasonably –1—-0,al.ued-a1Td-headed-highehere'-CXists-OUt-1heI e, -howe, e., a-hcrd-of-idio-t-sTwho-are-going-to-do—t-1 me the favor of selling stocks down to lower prices so that I, in my wisdom, may take advantage of those lower prices and buy them. There are, unfortunately,two likely possibilities in such a scenario. The first is that the ignoramuses who are going to drive the market down are not really waiting out there in the wings. The other possibility is for the ignoramuses to turn out to be smarter than the forecaster. At the moment, the opinion that a correction is imminent appears to be a fairly widely-held one. Based on the figures compiled by Investors Intelligence, Inc. as of April 12, three weeks ago, almost 50 of forecasters leaned in that direction. This was, interestingly, the highest percentage of forecasters expressing such a view since June, 1976. Historically, when the consensus opinion is basically bullish but favoring a near-term correction, one of two results tends to occur along the lines suggested above. Either the anticipated correction totally fails to materialize, or it does, indeed, emerge and then matures, along the way, into a full-scale bear market. We think this principle has a good chance of holding in the present case. It remains, of course, to choose between the two alternatives, and regular readers of this letter will be aware of our firm belief in the former, more optimistic one. We find ourselves reminding our readers ad nauseaum that this particular bull market is only eight months old, and instances of bull markets with such a short lifetime are comparative rarities. There indeed exists only one such to our knowledge, the Baby Bull Market of 1938. That particular upswing produced a 60 advance without substantial correction, over a seven-month period ending in November. 1938. The aftermath was a slow, steady erosion of prices .which lasted for the next 3! years and ultimately, in April, 1942, retraced the entie rise and brought the market back to a new low. Now we think that comparisons between today and 1938 produce precious little similarity. For one thing, the recent rise has taken the Dow to newall-time peaks, while the 1938 market was only a partial recovery. Furthermore, the 1938-1942 period was essentially the product of an aborted economic recovery, and our own faith in the viability of the current expansion remains essentially unshaken. Thus our own skepticism regarding a significant correction followed by new highs. Such a view it seems to us is dangerously close to allowing the trees to obscure one's view of the forest. ANTHONY W. TAB ELL AWTrs DELAFIELD, HARVEY, TABELL Dow-Jones Industrials (12 00 p.m. )1226. 30 S & P Composite (1200 p.m.) 165.30 Cumulative Index (5/5/83) 1888.81 No statement or expreSSion of opmlon or any olher maUer herein conlOlned IS, or IS 10 be deemed to be, directly or indirectly. on offer or thc soliCitation of on offer to bvy or sell any security referred to or menlloned The molter IS presented merelv for the convenlenc of the 5ubscflber While He believe the sources of our information to be relloble, we In no way represent or guarantee Ihe accuracy thereof nor of the stotements mude herem Anv action to be laken bV the subSCriber should be based on hiS own Investigation and Information Janney Montgomery Scott, Inc, as a corporation, and Its officers or employees, may now hove, or may loler toke, POSitions or trades m rupect to any seCUrities mentioned 10 thiS or ooy future nsue, and such POSition may be different from any vle ….s now or hereafter expressed In thiS or any other Issue Janney Montgomery ScaU, tnc , which IS registered With the SEC as on Investment adVisor, mav give adVice to Its Investment adVisory and othel customers IndependentlV of any stolements made In thiS or In any other Issue Further mformollOn on any seC1.Jr,lv mentioned herein IS available on request