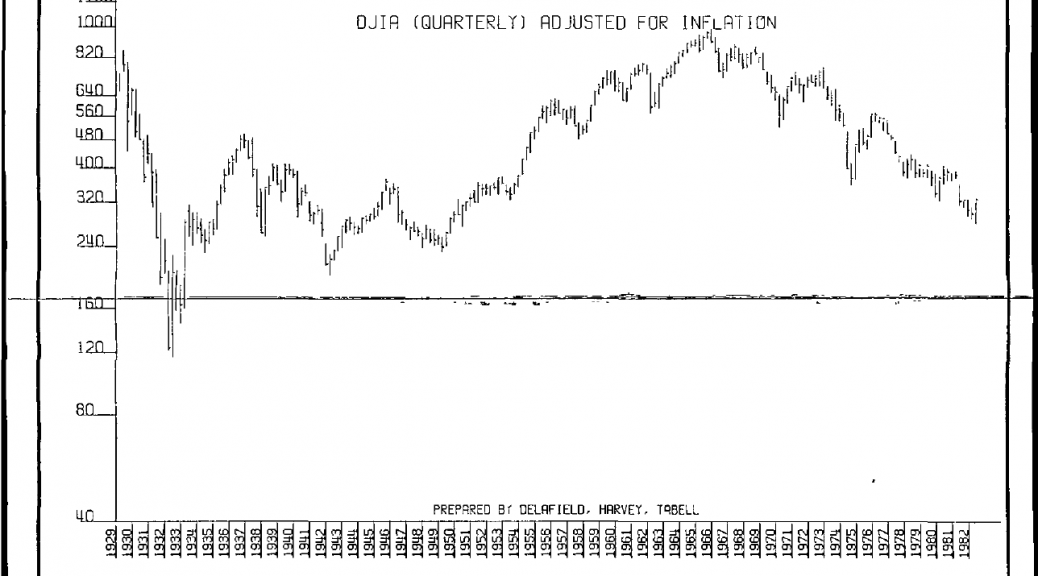 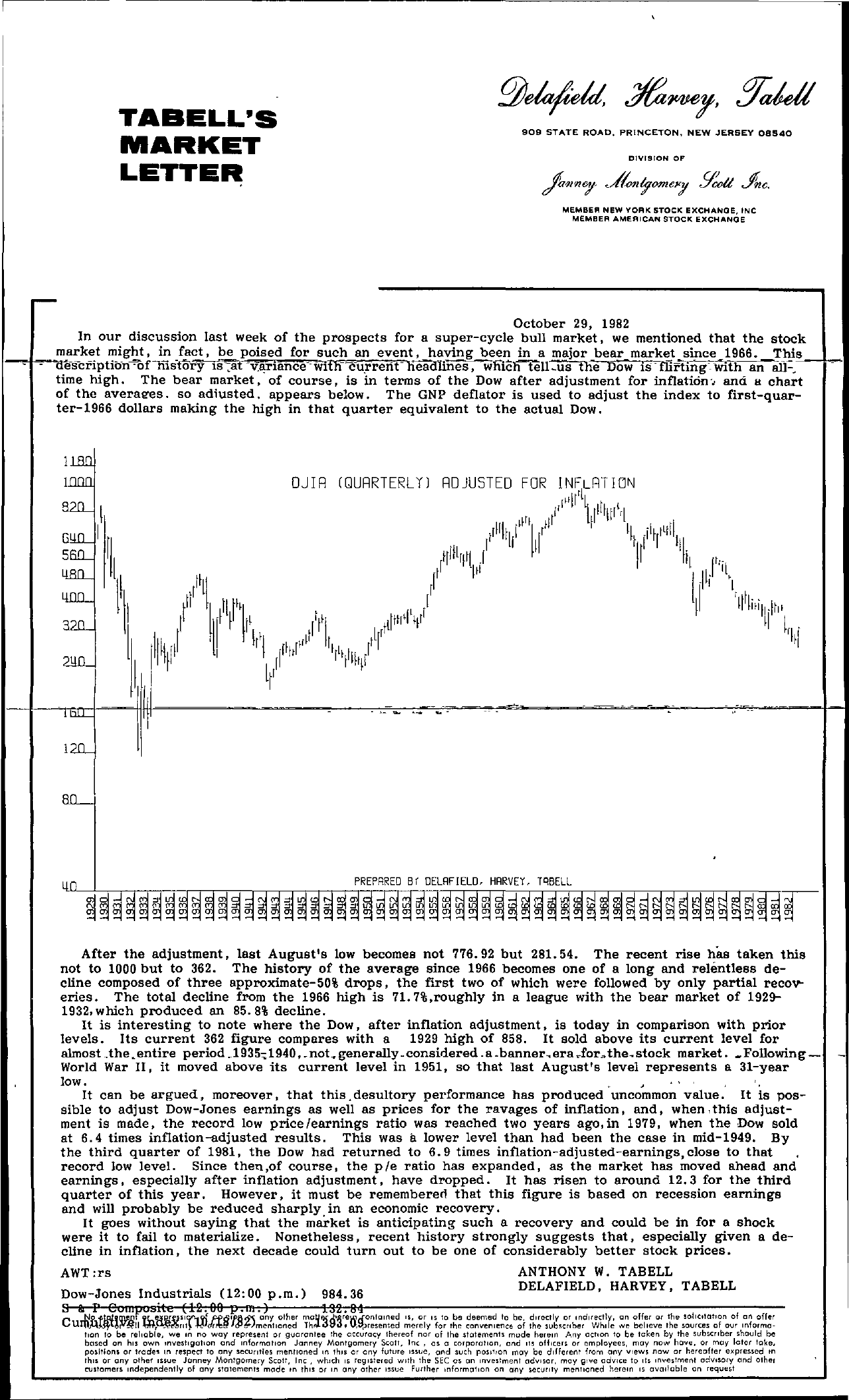 TABELL'S MARKET LETTER 909 STATE ROAD, PRINCETON, NEW JERSEY 08540 DIVISION OF' MEMBER NEW YOAK STOCK EXCHANGE, INC MEMBER AMERICAN STOCK EXCHANGE October 29, 1982 In our discussion last week of the prospects for a super-cycle bull market, we mentioned that the stock 1-'emscafrikpettiomnignhit1,syinoryfa,cst,'b8etpoviasreidanfcoer such With an event, having been in a major bear market since 1966. cU.rrertt neaalilies,-wrucn teI1ustlie Dow is'fliiiingwith an This alF,–lr- time high. The bear market, of course, is in terms of the Dow after adjustment for inflatiOn' and a chart of the averaQ'eS. so adiusted. appears below. The GNP deflator is used to adjust the index to first-quar- ter-1966 dollars making the high in that quarter equivalent to the actual Dow. PREPARED Bf DELAFIELD. HARVEY. TqBELL After the adjustment, last August's low becomes not 776.92 but 281. 54. The recent rise has taken this not to 1000 but to 362. The history of the average since 1966 becomes one of a long and relimtless de- cline composed of three approximate-50 drops, the first two of which were followed by only partial reco\ eries. The total decline from the 1966 high is 71. 7 ,roughly in a league with the bear market of 1929- 1932, which produced an 85.8 decline. It is interesting to note where the Dow, after inflation adjustment, is today in comparison with prior levels. Its current 362 figure compares with a 1929 high of 858. It sold above its current level for almost. the. entire period .1935 1940, . not. generally. considered. a. banner, era rfor. the, stock market. Following World War II, it moved above its current level in 1951, so that last August's level represents a 31-year low. It can be argued, moreover, that this.desultory performance has produced uncommon value. It is pos- sible to adjust Dow-Jones earnings as well as prices for the ravages of inflation, and, when. this adjust- ment is made, the record low price/earnings ratio was reached two years ago,in 1979, when the Dow sold at 6.4 times inflation-adjusted results. This was Ii lower level than had been the case in mid-1949. By the third quarter of 1981, the Dow had returned to 6.9 times inflation-adjusted-earnings,close to that record low level. Since then ,of course, the p /e ratio has expanded, as the market has moved ahead and earnings, especially after inflation adjustment, have dropped. It has risen to around 12.3 for the third quarter of this year. However, it must be remembereo that this figure is based on recession earnings and will probably be reduced sharply in an economic recovery. It goes without saying that the market is anticipating such a recovery and could be in for a shock were it to fail to materialize. Nonetheless, recent history strongly suggests that, especially given a de- cline in inflation, the next decade could turn out to be one of considerably better stock prices. AWTrs Dow-Jones Industrials (12 00 p.m.) 984.36 ANTHONY W. TAB ELL DELAFIELD, HARVEY, TABELL C NP.flPl!Q\I!.(l Um..l4.M't 1'11 iWt,…e.rrflJStllf'l1dipf lWe9c156I'P680-Jm'eonntyloontheedr mThot,/QLo),.t3..reVK,lt1f,onretcselnnteedd IS, or IS 10 be merely for the deemed to be, canvenlenctS of directly or Indlfectly, thc subscriber WhIle on 'Ie offer or belIeve the solicltahon of the sources of our an offer mforma- tlon to be rel,able, we m no way represent or guarantee thc accuracy thereof nor of the statements mode herem Any act,on to be token by the subscrober should be based on hiS own mvest,gahon and Information Janney Montgomery Scott, Inc, as a corporat,on, and ,15 officers or employees, may now have, or moy later toke, positions or trade In respect to any securities mentioned m thiS or any future Issue, and such pOSitIOn may be difFerent from any views now or hereafter expressed m thiS or any other Issue Janney Montgomery Scali, Inc, whIch ,s registered With the SEC as on mvestment adv,sor, may gIve adVice to ,ts mvestment adVisory and other rustomers mdependently of any statements made m thiS or In any othcr Issue Further Information on any security mentioned herein IS available on request