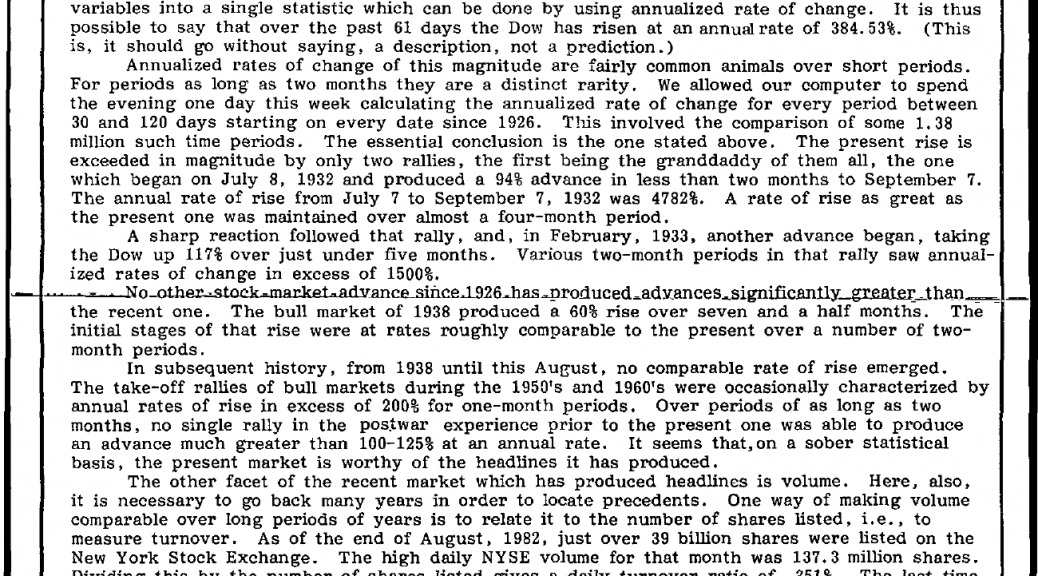 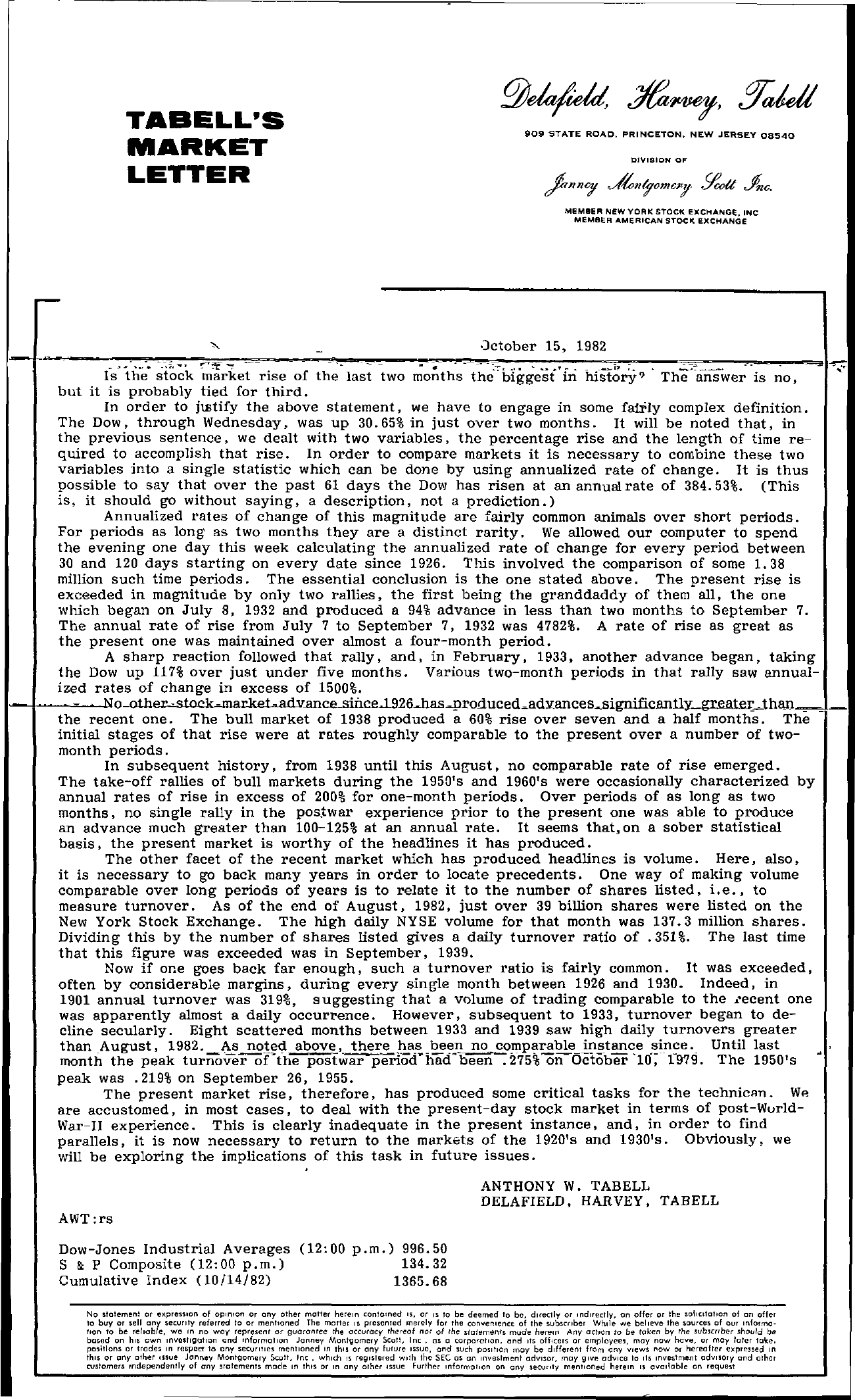 TABELL'S MARKET LETTER 909 STATE ROAD, PRINCETON, NEW JERSEY 08540 DIVISION OF MEMBER NEW YORK STOCK EXCHANGE, INC MEMBER AMERICAN STOCK EXCHANGE – )ctober 15, 1982 — .. ..———-..-.-r..'.—————.—7-..-..-..——–;.——————,I Is the stock market rise of the last two months the biggest in history The—answer is no, ' but it is probably tied for third. In order to ju;tify the above statement, we have to engage in some fatrly complex definition. The Dow, through Wednesday, was up 30.65 in just over two months. It will be noted that, in the previous sentence, we dealt with two variables, the percentage rise and the length of time re- quired to accomplish that rise. In order to compare markets it is necessary to combine these two variables into a single statistic which can be done by using annualized rate of change. It is thus possible to say that over the past 61 days the Dow has risen at an annual rate of 384.53. (This is, it should go without saying, a description, not a prediction.) Annualized rates of change of this magnitude are fairly common animals over short periods. For periods as long as two months they are a distinct rarity. We allowed our computer to spend the evening one day this week calculating the annualized rate of change for every period between 30 and 120 days starting on every date since 1926. This involved the comparison of some 1. 38 million such time periods. The essential conclusion is the one stated above. The present rise is exceeded in magnitude by only two rallies, the first being the granddaddy of them all, the one which began on July 8, 1932 and produced a 94 advance in less than two months to September 7. The annual rate of rise from July 7 to September 7, 1932 was 4782. A rate of rise as great as the present one was maintained over almost a four-month period. A sharp reaction fOllowed that rally, and, in February, 1933, another advance began, taking the Dow up 117 over just under five months. Various two-month periods in that rally saw annual- ized rates of change in excess of 1500. 1—-li–JNo-other -stock -market adv.ance since..1.926..has..producedadyances…significanlly. greater -than, the recent one. The bull market of 1938 produced a 60 rise over seven and a half months. The initial stages of that rise were at rates roughly comparable to the present over a number of two- month periods. In subsequent history, from 1938 until this Aue-ust, no comparable rate of rise emerged. The take-off rallies of bull markets during the 1950's and 1960's were occasionally characterized by annual rates of rise in excess of 200 for one-month periods. Over periods of as long as two months, no single rally in the postwar experience prior to the present one was able to produce an advance much greater than 100-125 at an annual rate. It seems that, on a sober statistical basis, the present market is worthy of the headlines it has produced. The other facet of the recent market which has produced headlines is volume. Here, also, it is necessary to go back many years in order to locate precedents. One way of making volume comparable over long periods of years is to relate it to the number of shares listed, i. e., to measure turnover. As of the end of August, 1982, just over 39 billion shares were listed on the New York Stock Exchange. The high daily NYSE volume for that month was 137.3 million shares. Dividing this by the number of shares listed gives a daily turnover ratio of .351. The last time that this figure was exceeded was in September, 1939. Now if one goes back far enough, such a turnover ratio is fairly common. It was exceeded, often by considerable margins, during every single month between 1926 and 1930. Indeed, in 1901 annual turnover was 319, suggesting that a volume of trading comparable to the ,'ecent one was apparently almost a daily occurrence. However, subsequent to 1933, turnover began to de- cline secularly. Eight scattered months between 1933 and 1939 saw high daily turnovers greater than August, 1982. As noted above, there has been no comparable instance since. Until last month the peak turnoverof'ihe postwar perlodhildoeen .275anOctober 10;r979. The 1950's peak was .219 on September 26, 1955. The present market rise, therefore, has produced some critical tasks for the technican We are accustomed, in most cases, to deal with the present-day stock market in terms of post-Wurld- War-II experience. This is clearly inadequate in the present instance, and, in order to find parallels, it is now necessary to return to the markets of the 1920's and 1930's. Obviously, we will be exploring the implications of this task in future issues. AWTrs ANTHONY W. TABELL DELAFIELD, HARVEY, TABELL Dow-Jones Industrial Averages (1200 p.m.) 996.50 S & P Composite (1200 p.m.) 134.32 Cumulative Index (10/14/82) 1365.68 No statement or expression of opinion or any other moiler herein contained IS, or I to be deemed to be, directly or Indirectly, on offer or the soliCitation of on offer to buy or sell ony security referred 10 or menhoned The moiler 15 presented merely for the convenience of the subcrrber Whde -He believe Ihe sources of our InformoIton to be relloble, we In no way represent or guarantee Ihe accuracy thereof nor of Inc slalements mode herem Any oerrcn to be token by Ihe 5ub5Cf/br should be based on hiS own Invesllgotlon and Information Janney Montgomery Scott, Inc, 0 a corporation, and Its officers or employees, may now have, or may later toke, pos!llon5 or trades In respect to ony securities mentioned In thiS or any Future Issue, ond such POSition may be different from any Views now or hereafter expressed In thiS or any other Issue Janney Montgomery Scolt, Inc, which IS registered With Ihc SEC as on Investment adVisor, may give odvlce to 11 Investment adVisory ond othel customers Independently of ony slatements made In thiS or In any other Issue Further Information on any security mentioned herein IS available on request