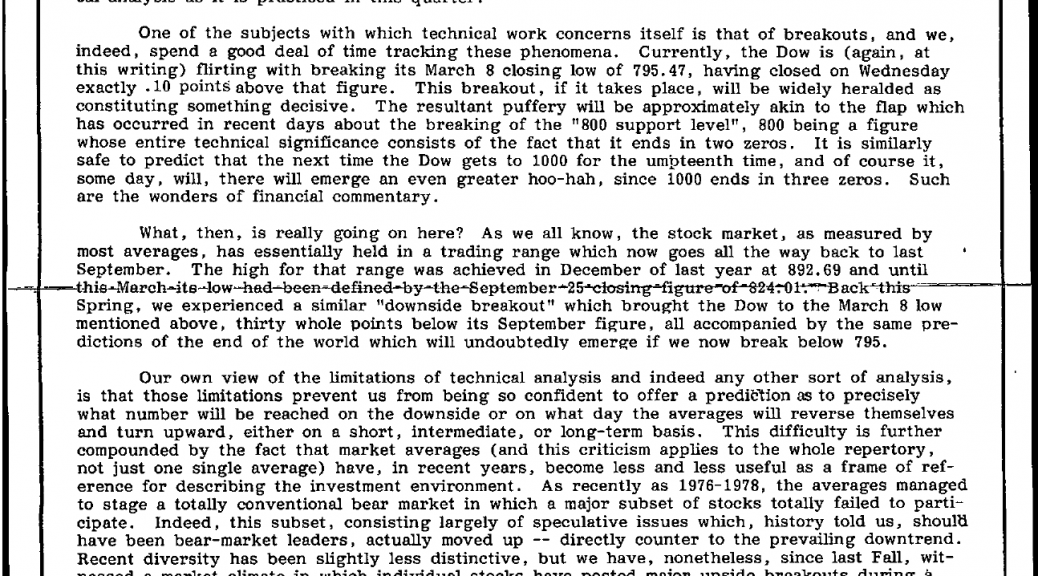 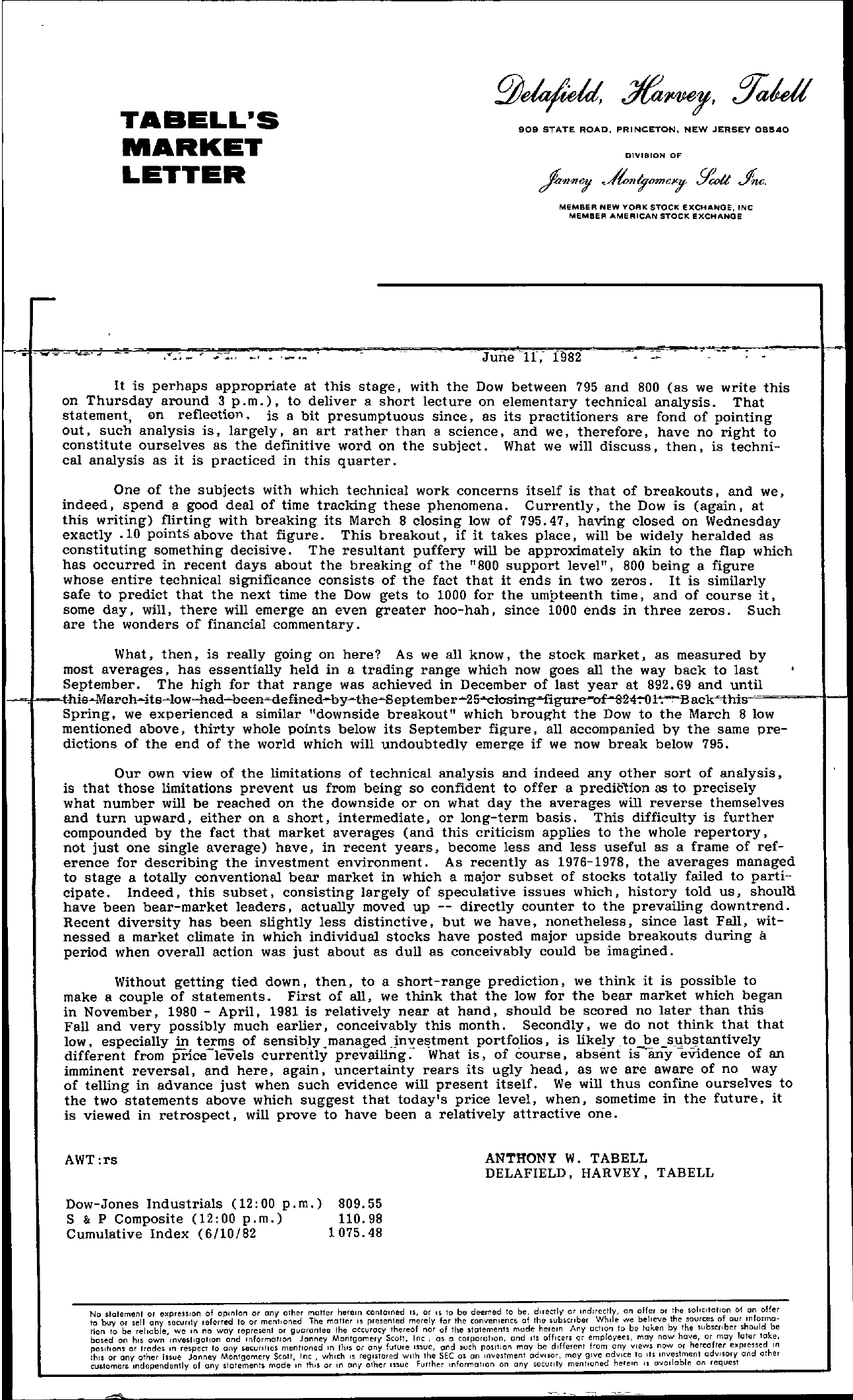 TABELL'S MARKET LETTER 909 STATE ROAD, PRINCETON, NEW JERSEY OBS40 DIYISION OF MEMBER NEW YORK STOCK EXCHANGE, INC MEMBER AMERICAN STOCK EXCHANOE It is perhaps appropriate at this stage, with the Dow between 795 and 800 (as we write this on Thursday around 3 p. m.), to deliver a short lecture on elementary technical analysis. That statement, on reflection, is a bit presumptuous since, as its practitioners are fond of pointing out, such analysis is, largely, an art rather than a science, and we, therefore, have no right to constitute ourselves as the definitive word on the subject. What we will discuss, then, is technical analysis as it is practiced in this quarter. One of the subjects with which technical work concerns itself is that of breakouts, and we, indeed, spend a good deal of time tracking these phenomena. Currently, the Dow is (again, at this writing) flirting with breaking its March 8 closing low of 795.47, having closed on Wednesday exactly .10 points above that figure. This breakout, if it takes place, will be widely heralded as constituting something decisive. The resultant puffery will be approximately akin to the flap which has occurred in recent days about the breaking of the 800 support level, 800 being a figure whose entire technical significance consists of the fact that it ends in two zeros. It is similarly safe to predict that the next time the Dow gets to 1000 for the umpteenth time, and of course it, some day, will, there will emerge an even greater hoo-hah, since 1000 ends in three zeros. Such are the wonders of financial commentary. What, then, is really going on here As we all know, the stock market, as measured by most averages, has essentially held in a trading range which now goes all the way back to last September. The high for that range was achieved in December of last year at 892.69 and until 1—t-t-hia–Mal'ch-it6-low-haefined.-by4e…geptember-25closin;;figuIe of 824–01'Back-thi-o—-II—I Spring, we experienced a similar downside breakout which brought the Dow to the March 8 low mentioned above, thirty whole points below its September figure, all accompanied by the same predictions of the end of the world which will undoubtedly emerge if we now break below 795. Our own view of the limitations of technical analysis and indeed any other sort of analysis, is that those limitations prevent us from being so confident to offer a prediction as to precisely what number will be reached on the downside or on what day the averages will reverse themselves and turn upward, either on a short, intermediate, or long-term basis. This difficulty is further compounded by the fact that market averages (and this criticism applies to the whole repertory, not just one single average) have, in recent years, become less and less useful as a frame of reference for describing the investment environment. As recently as 1976-1978, the averages managed to stage a totally conventional bear market in which a major subset of stocks totally failed to participate. Indeed, this subset, consisting largely of speculative issues which, history told us, shouHl have been bear-market leaders, actually moved up — directly counter to the prevailing downtrend. Recent diversity has been slightly less distinctive, but we have, nonetheless, since last Fall, witnessed a market climate in which individual stocks have posted major upside breakouts during period when overall action was just about as dull as conceivably could be imagined. Without getting tied down, then, to a short-range prediction, we think it is possible to make a couple of statements. First of all, we think that the low for the bear market which began in November, 1980 – April, 1981 is relatively near at hand, should be scored no later than this Fall and very possibly much earlier, conceivably this month. Secondly, we do not think that that low, especially in, tlIl! of sensibly .managod Jnestment. portfolios, is like!y t-2e Sb.tantively different from pnce levels currently prevruling. What IS, of course, absent IS any eVIdence of an imminent reversal, and here, again, uncertainty rears its ugly head, as we are aware of no way of telling in advance just when such evidence will present itself. We will thus confine ourselves to the two statements above which suggest that today's price level, when, sometime in the future. it is viewed in retrospect. will prove to have been a relatively attractive one. AWTrs Dow-Jones Industrials (1200 p.m.) 809.55 S & P Composite (1200 p.m.) 110.98 Cumulative Index (6/10/82 1075.48 ANTHONY W. TABELL DELAFIELD. HARVEY, TABELL No stotement or expression of opinion or any other molter hercm contamed IS, or IS 10 be deemed 10 be. directly or indirectly, on offer or the sollcltotlon of an offer to buy or sell any sCC\lrlty referred 10 Of mentioned The mall!!r IS presenled merely for the convenienCE of the subcrlber While we believe the sources of our Information to be reliable, we In no way represent or guarantee the accuracy thereof nor of Ihe statements mude herein Any action to be taken by the subscriber should be based on hiS own Inve5llgotlon and Information Janney Montgomery SCali, Inc, as a corporation, and lIs officers or employees, may now have, or may later toke, positions or trodes In respect to any securities menlloned In thiS or any future luue, and such POSition may be different from any views now or hereafter expressed In thiS or any other Issue Janney Montgomery Scott, Inc, which IS registered With the SEC as on IIlvestmenl adVisor, may give adv,ce to Its Inveslment adVisory and other customers Independently of any statements mode III thiS or In any other U5ue Further mformatlon on any security menhaned herein IS available all request