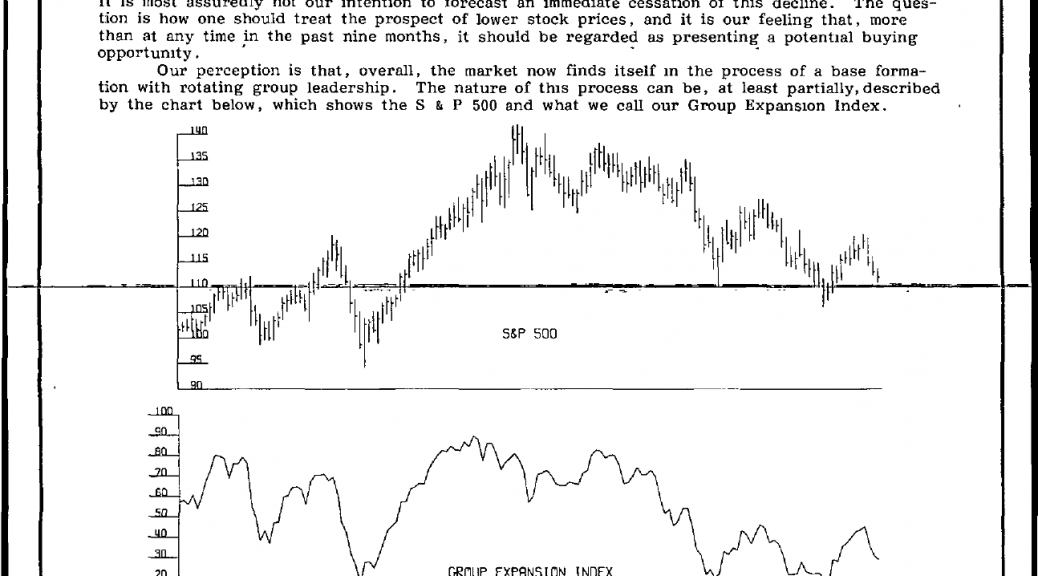 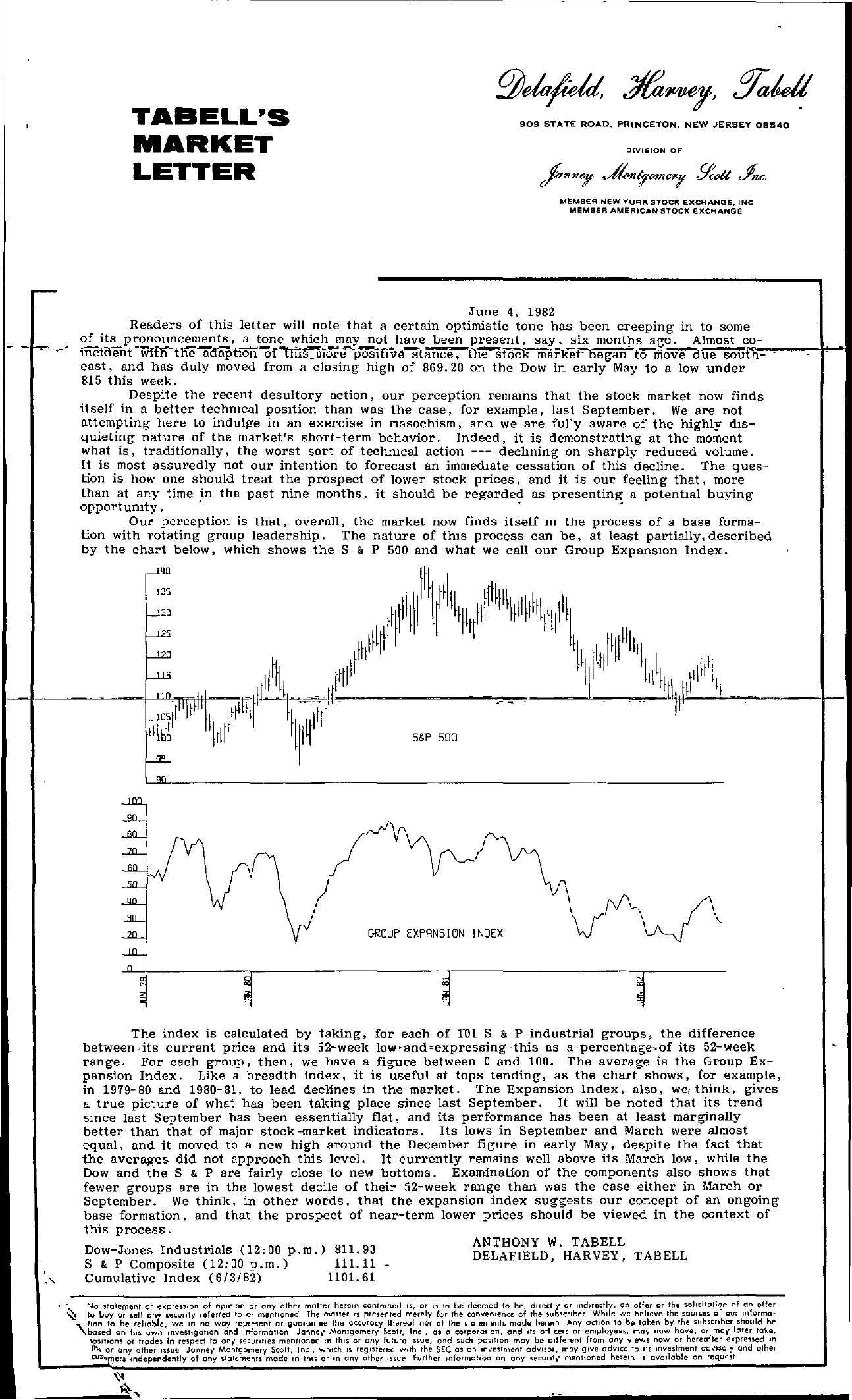 TABELL'S MARKET LETTER 909 STATE ROAD, PRINCETON, NEW JERSEY 08540 DIVISION OF MEMBER NEW YORK STOCK EXCHANGE, INC MEMBER AMERICAN STOCK EXCHANGE — -.- – June 4, 1982 Readers of this letter will note that a certain optimistic tone has been creeping in to some of its pronouncements. a tone which may not have been —-1.incldeh('Wr!'!,t neiidnphon of-th,S''nfOrep'Osifi'V'eStance, present. fIle- siOCl smaayr.JsHixome goannt-htOsinoaveg-ao.u;;e;A;;l-m;';o;ss;t;ocuo— …. east, and has duly moved from a closing high of 869.20 on the Dow in early May to a low under 815 this week. Despite the recent desultory action, our perception remruns that the stock market now finds itself in a better technICal posItion than was the case, for example, last September. We are not attempting here to indulge in an exercise in masochism, and we are fully aware of the highly dIS- quieting nature of the market's short-term behavior. Indeed. it is demonstrating at the moment what is, traditionally. the worst sort of technICal action — declIning on sharply reduced volume. It is most assuredly not our intention to forecast an immedIate cessation of this decline. The ques- tion is how one should treat the prospect of lower stock prices, and it is our feeling that, more than at any time in the past nine months, it should be regarded as presenting a potential buying opportumty. -. Our perception is that, overall, the market now finds itself In the process of a base forma- tion with rotating group leadership. The nature of thIS process can be, at least partially, described by the chart below, which shows the S & P 500 and what we call our Group ExpanSIon Index. GROUP EXPANSION INDEX , — , L- The index is calculated by taking, for each of llll S & P industrial groups, the difference betweenits current price and its 52-week lowandexpressingthis as a'percentage,of its 52-week range. For each group, then, we have a figure between 0 and 100. The average is the Group Ex- pansion Index. Like a breadth index! it is useful at tops tending, as the chart shows, for example, in 1979-80 and 1980-81, to lead declines in the market. The Expansion Index, also, we, think, gives a true picture of what has been taking place since last September. It will be noted that its trend SInce last September has been essentially flat, and its performance has been at least marginally better than that of major stock -market indicators. Its lows in September and March were almost equal, and it moved to a new high around the December figure in early May, despite the fact that the averages did not approach this level. It currently remains well above its March low, while the Dow and the S & P are fairly close to new bottoms. Examination of the components also shows that fewer groups are in the lowest decile of their 52-week range than was the case either in March or September. We think. in other words. that the expansion index suggests our concept of an ongOing base formation, and that the prospect of near-term lower prices should be viewed in the context of this process. Dow-Jones Industrials (12 00 p. m.) 811. 93 S & P Composite (12 00 p.m.) 111.11 – ANTHONY W. TAB ELL DELAFIELD, HARVEY, TAB ELL Cumulative Index (6/3/82) 1101. 61 No statement or expreulon of opmlOn or any other matter herem contained IS, or IS to be deemed to be. dlredly or Indirectly, on offer or the !Oltcltollor of on offer to buy or sell any seCUfily referred 10 or mentioned The moiler IS presented merely for Ihe convenumCf of Ihe subscriber While we believe the sources of our mforma- flO to be relloble, we In no way represent or guarantee the accuracy thereof nor of the stalefT'ents mude herein Any adlon 10 be laken by Ihe subscnber should be based on hiS own investigation and Informallon Janney Montgomery Scali, Inc, as a corporation, and Its officers or employees, may now have, or may later lake, ,,sltlons or trades In respect to any securities menltoned In thiS or any future Issue, ond such position may be different from any views now or hereafter expressed In ' t or any olher Issue Janney Monlgomery Scott. Inc, whICh IS registered Wllh the SEC as on Investment adVisor, may give adVice to Its mvestmenl adVisory and otner C\J3'flIers Independently of any stotements mode In thiS or In ony other Issue Further lI'Iformatlon on any seoJrlty mentioned herein IS aycliloble on request