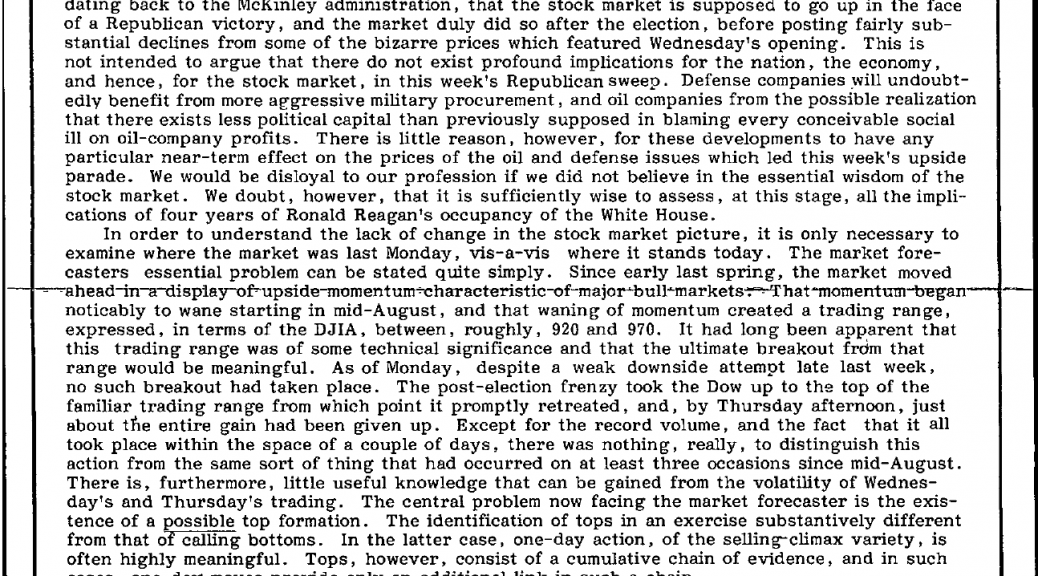 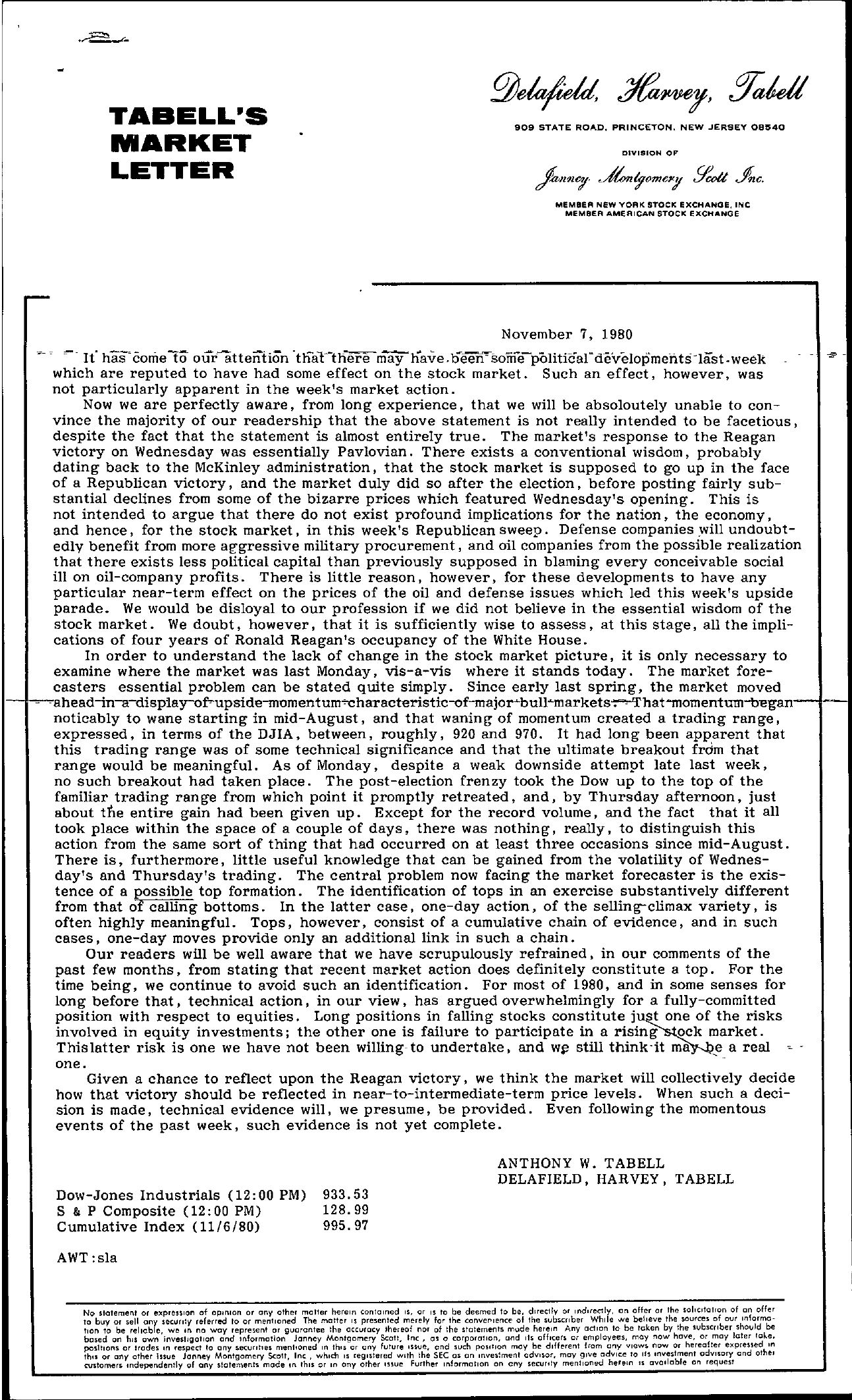 TABELL'S MARKET LETTER 909 STATE ROAD, PRINCETON, NEW JERSEY 081540 DIVISION OF MEMBER NEW VOAK STOCK eXCHANGE, INC MEMBER AMERICAN STOCK eXCHANGE – November 7, 1980 ,- c – If hascometo ourattent;on -tnarthere may nave , developments'last, week which are reputed to have had some effect on the stock market. Such an effect, however, was not particularly apparent in the week's market action. Now we are perfectly aware, from long experience, that we will be absoloutely unable to con- vince the majority of our readership that the above statement is not really intended to be facetious, despite the fact that the statement is almost entirely true. The market's response to the Reagan victory on Wednesday was essentially Pavlovian. There exists a conventional wisdom, probably dating back to the McKinley administration, that the stock market is supposed to go up in the face of a Republican victory, and the market duly did so after the election, before posting fairly sub- stantial declines from some of the bizarre prices which featured Wednesday's opening. This is not intended to argue that there do not exist profound implications for the nation, the economy, and hence, for the stock market, in this week's Republican sweep. Defense companies will undoubt- edly benefit from more ag-gressive military procurement, and oil companies from the possible realization that there exists less political capital than previously supposed in blaming every conceivable social ill on oil-company profits. There is little reason, however, for these developments to have any particular near-term effect on the prices of the oil and defense issues which led this week's upside parade. We would be disloyal to our profession if we did not believe in the essential wisdom of the stock market. We doubt, however, that it is sufficiently wise to assess, at this stage, all the implications of four years of Ronald Reagan's occupancy of the White House. In order to understand the lack of change in the stock market picture, it is only necessary to examine where the market was last Monday, vis-a-vis where it stands today. The market forecasters essential problem can be stated quite simply. Since early last spring, the market moved 1- noticably to wane starting in mid-August, and that waning of momentum created a trading range, expressed, in terms of the DJIA, between, roughly, 920 and 970. It had long been apparent that this trading range was of some technical significance and that the ultimate breakout frdm that range would be meaningful. As of Monday, despite a weak downside attempt late last week, no such breakout had taken place. The post-election frenzy took the Dow up to the top of the familiar trading range from which point it promptly retreated, and, by Thursday afternoon, just about the entire gain had been given up. Except for the record volume, and the fact that it all took place within the space of a couple of days, there was nothing, really, to distinguish this action from the same sort of thing that had occurred on at least three occasions since mid-August. There is, furthermore, little useful knowledge that can be gained from the volatility of Wednesday's and Thursday's trading. The central problem now facing the market forecaster is the exis- tence of a top formation. The identification of tops in an exercise substantively different from that 0 calling bottoms. In the latter case, one-day action, of the selling-climax variety, is often highly meaningful. Tops, however, consist of a cumulative chain of evidence, and in such cases, one-day moves provide only an additional link in such a chain. Our readers will be well aware that we have scrupulously refrained, in our comments of the past few months, from stating that recent market action does definitely constitute a top. For the time being, we continue to avoid such an identification. For most of 1980, and in some senses for long before that, technical action, in our view, has argued overwhelmingly for a fully-committed position with respect to equities. Long positions in falling stocks constitute j t one of the risks involved in equity investments; the other one is failure to participate in a rising ock market. Thislatter risk is one we have not been willing-to undertake, and still think-it rna e a real one. Given a chance to reflect upon the Reagan victory, we think the market will collectively decide how that victory should be reflected in near-to-intermediate-term price levels. When such a decision is made, technical evidence will, we presume, be provided. Even following the momentous events of the past week, such evidence is not yet complete. – — Dow-Jones Industrials (12 00 PM) 933.53 S & P Composite (12 00 PM) 128.99 Cumulative Index (11680) 995.97 AWTsla ANTHONY W. TABELL DELAFIELD, HARVEY, TABELL NQ statement or expreslon of opinIOn or any other molter herein conlOlned IS, or IS 10 be deemed to be, dlreCl1y or Indirectly. on offer or the solicllolton of an oHer to buy or sell ony secIJrlly referred to or mentioned The motter IS presented merely for the convePlence of the subSCriber While -JoJe believe the sources of our Informa- tion to be reliable, we In no wo-y represent or guarantee the accuracy thereof nor of the statements mude nereln Any action to- be token by the subscriber should be based on hl own Investigation and mformotlon Janney Montgomery Inc, as 0- corporation, ond Its officers or employees, may now have, or may later tole, posltlons or trades In respect to ony securities mentioned In th,s or ony future 1Ue, and such posilion may be different from any views now or hereafter expressed In thIS or any other Issue Janney Montgomery Inc, which IS registered With the SEC as on Investment adVisor, moy give adVice to lis Investment odvisory and olhel customers Independently of any statements made ,n Ih,s or In ony other ISsue Further information on any secuflty mentioned herem IS available on request