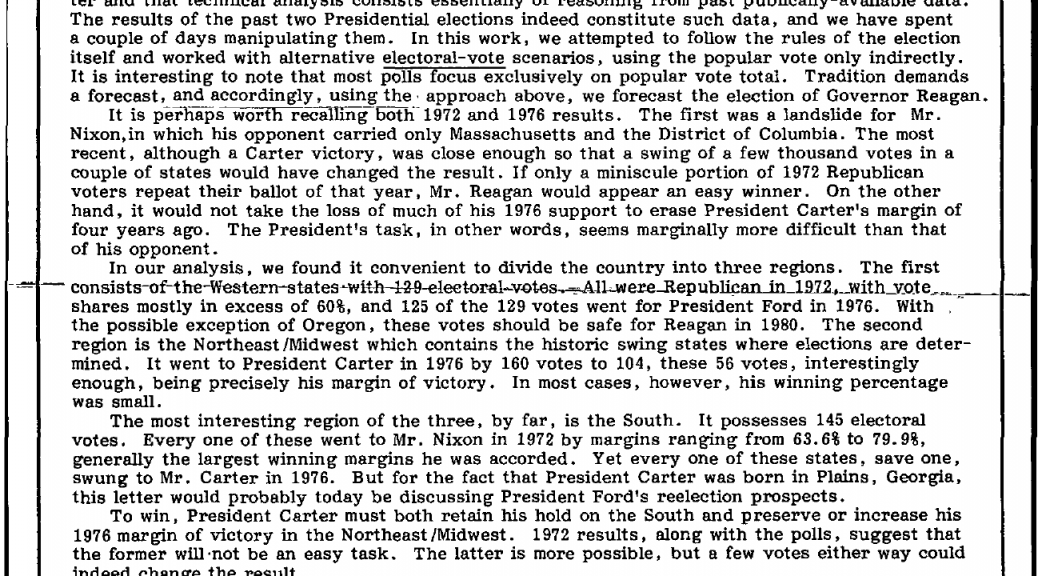 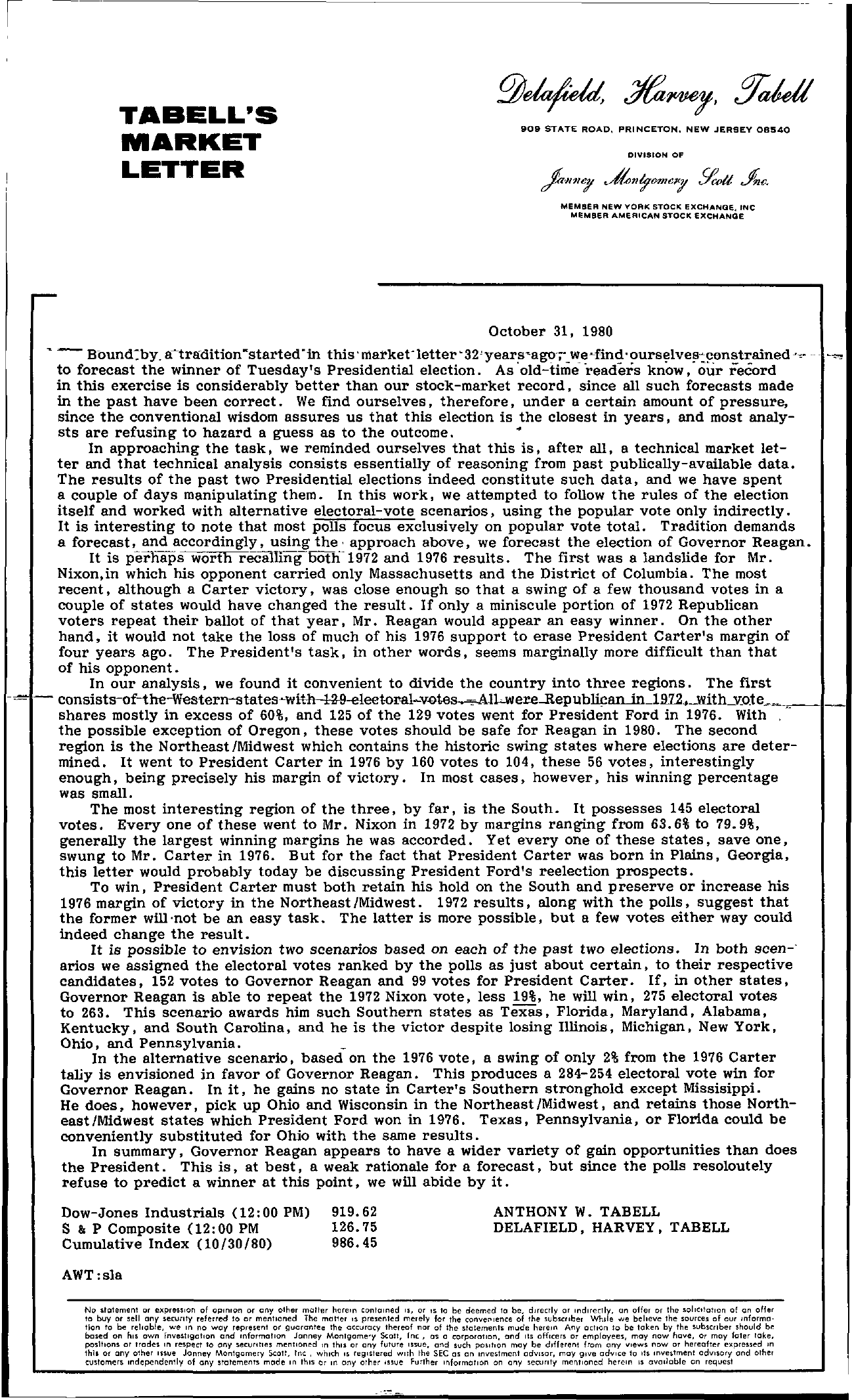 TABELL'S MARKET LETTER 909 STATE ROAD, PRINCETON. NEW JERSEY 08540 DIVISION OF MEMBER NEW YORK STOCK EXCHANGE, INC MEMBER AMERICAN STOCK EXCHANGE October 31, 1980 – atraditionstartedin this 'market letter 32 'years'ago, ..,. to forecast the winner of Tuesday's Presidential election As 'old-time readers know, our record in this exercise is considerably better than our stock-market record, since all such forecasts made in the past have been correct We find ourselves, therefore, under a certain amount of pressure, since the conventional wisdom assures us that this election is the closest in years, and most analy- sts are refusing to hazard a guess as to the outcome. In approaching the task, we reminded ourselves that this is, after all, a technical market let- ter and that technical analysis consists essentially of reasoning from past publically-available data. The results of the past two Presidential elections indeed constitute such data, and we have spent a couple of days manipulating them. In this work, we attempted to follow the rules of the election itself and worked with alternative electoral-vote scenarios, using the popular vote only indirectly. It is interesting to note that most polls focus exclusively on popular vote total. Tradition demands a forecast, and accordingly, using the, approach above, we forecast the election of Governor Reagan. It is perhaps worth recalling botJi 1972 and 1976 results. The first was a landslide for Mr. Nixon,in which his opponent carried only Massachusetts and the District of Columbia. The most recent, although a Carter victory, was close enough so that a swing of a few thousand votes in a couple of states would have changed the result If only a miniscule portion of 1972 Republican voters repeat their ballot of that year, Mr. Reagan would appear an easy winner. On the other hand, it would not take the loss of much of his 1976 support to erase President Carter's margin of four years ago. The President's task, in other words, seems marginally more difficult than that of his opponent. – – In our analysis, we found it convenient to divide the country into three regions. The first – shares mostly in excess of 60, and 125 of the 129 votes went for President Ford in 1976. With ,- the possible exception of Oregon, these votes should be safe for Reagan in 1980. The second region is the Northeast/Midwest which contains the historic swing states where elections are deter- mined. It went to President Carter in 1976 by 160 votes to 104, these 56 votes, interestingly enough, being precisely his margin of victory. In most cases, however, his winning percentage was small. The most interesting region of the three, by far, is the South. It possesses 145 electoral votes. Every one of these went to Mr. Nixon in 1972 by margins ranging from 63.6 to 79.9, generally the largest winning margins he was accorded. Yet every one of these states, save one, swung to Mr. Carter in 1976. But for the fact that President Carter was born in Plains, Georgia, this letter would probably today be discussing President Ford's reelection prospects. To win, President Carter must both retain his hold on the South and preserve or increase his 1976 margin of victory in the Northeast/Midwest. 1972 results, along with the polls, suggest that the former willnot be an easy task. The latter is more possible, but a few votes either way could indeed change the result. It is possible to envision two scenarios based on each of the past two elections. In both arios we assigned the electoral votes ranked by the polls as just about certain, to their respective candidates, 152 votes to Governor Reagan and 99 votes for President Carter. If, in other states, Governor Reagan is able to repeat the 1972 Nixon vote, less 19, he will win, 275 electoral votes to 263. This scenario awards him such Southern states as Texas, Florida, Maryland, Alabams, Kentucky, and South Carolina, and he is the victor despite losing Illinois, Michigan, New York, Ohio, and Pennsylvania. In the alternative scenario, based on the 1976 vote, a swing of only 2 from the 1976 Carter tsliy is envisioned in fsvor of Governor Reagan. This produces a 284-254 electoral vote win for Governor Reagan. In it, he gains no state in Carter's Southern stronghold except Missisippi. He does, however, pick up Ohio and Wisconsin in the Northeast/Midwest, and retains those North- east/Midwest states which President Ford won in 1976. Texas, Pennsylvania, or Florida could be conveniently substituted for Ohio with the same results. In summary, Governor Reagan appears to have a wider variety of gain opportunities than does the President. This is, at best, a weak rationale for a forecast, but since the polls resoloutely refuse to predict a winner at this point, we will abide by it. Dow-Jones Industrials (1200 PM) 919.62 S & P Composite (12 00 PM 126.75 Cumulative Index (10/30/80) 986.45 ANTHONY W. TAB ELL DELAFIELD, HARVEY, TABELL AWTsla No statement or C!xpresslon of opinion or (lny olher mottcr herein contolned 1, or IS 10 be deemed to be, dIrectly or ,nd,rectly, an offer or thl! sol,c,tot,on of on offer to buy or sell any security referred to or mentioned The matter IS presented merely for the convellence of the subscriber While oNe believe the sources of our information to be reliable, we ,n no way represent or guarontee Ihe accuracy thereof nor of the statements ml,lde hereIn Any actIon 10 be token by the subscriber should be based on hIS own fnvestlgatlon and InformatIon Janney Montgome'y Scali, Inc, as a corporatIon, and lIs OffICI!rS Or employees, may now have, Or may later lake, pos1tlons or trades In respect to any securttles mentIoned 111 Ih,s or any future Issue, and such poslllon may be dIfferent from any vIews now or hereafter expressed 111 th15 or any other lSue Janney Montgomery Scott, Inc, whICh ,s regIstered WITh the SEC 05 on Investment adVisor, may gIVe adVICe to Its 1I1vestmen! adVisory and other customers Independently of any statements mode In thiS or 111 any other Issue Further InformatIon on any security mentioned hereIn IS aVaIlable on request