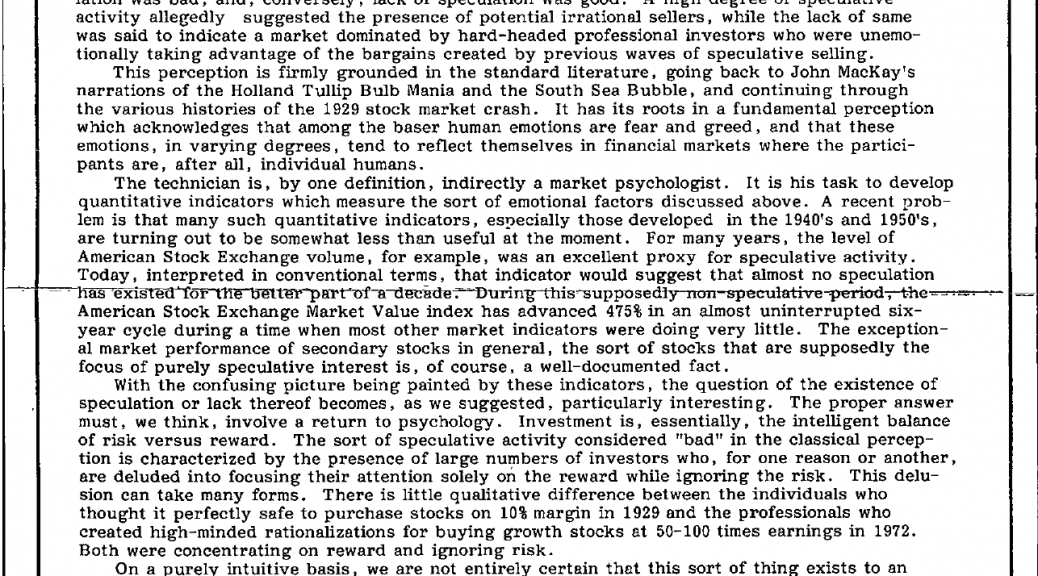 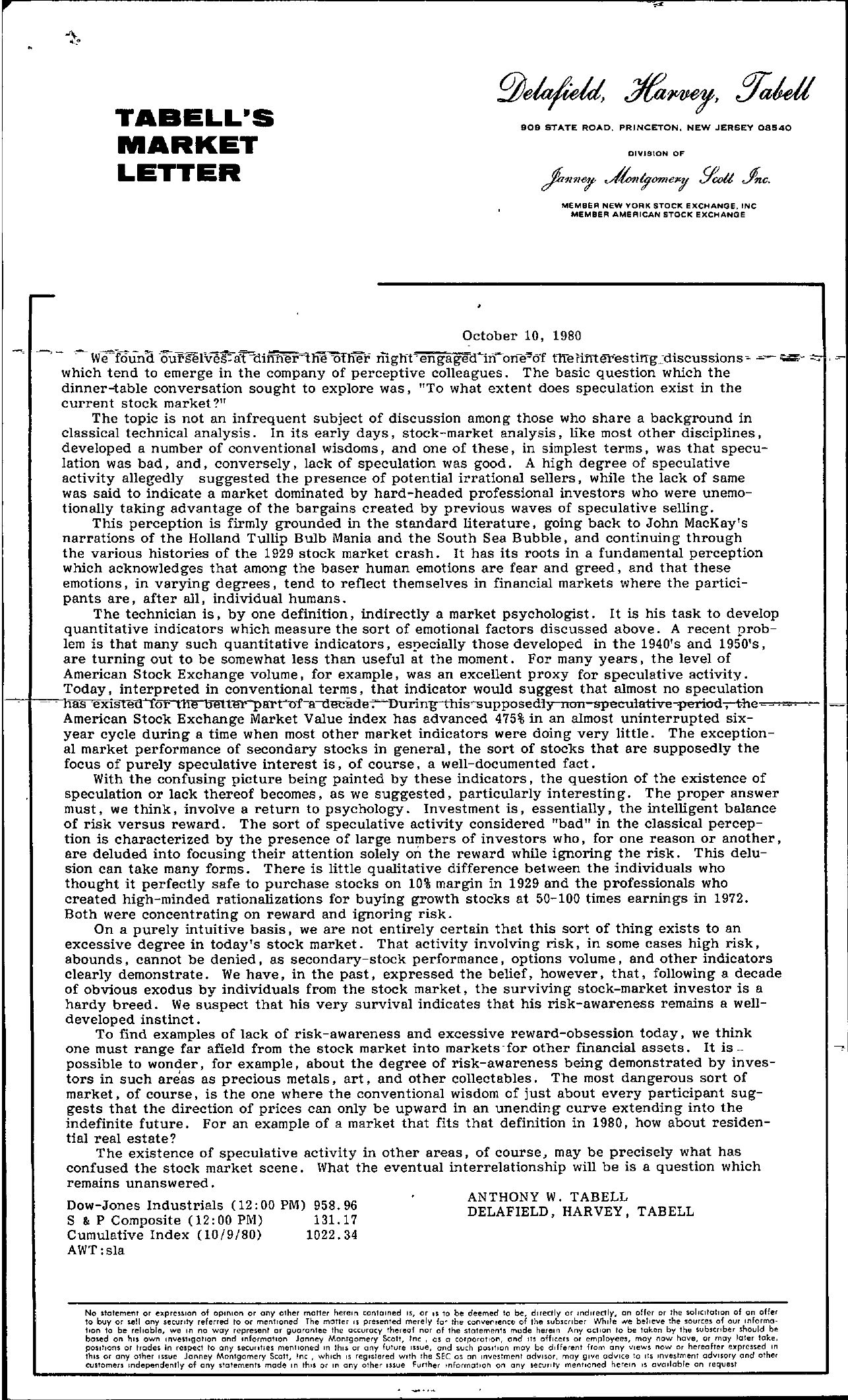 TABELL'S MARKET LETTER 909 STATE ROAD, PRINCETON. NEW JERSEY 08540 DIVISION OF MEMBER NEW YORK STOCK eXCHANGE, INC MEMBER AMERICAN STOCK EXCHANGE October 10, 1980 – ,– We–f6un1 -oursel'veatdit'frYe1rremnef nlglit -engage'd-inon-eM tile – which tend to emerge in the company of perceptive colleagues. The basic question which the dinner-table conversation sought to explore was, To what extent does speculation exist in the current stock market The topic is not an infrequent subject of discussion among those who share a background in classical technical analysis. In its early days, stock-market analysis, like most other disciplines, developed a number of conventional wisdoms, and one of these, in simplest terms, was that specu- lation was bad, and, conversely, lack of speculation was good. A high degree of speculative activity allegedly suggested the presence of potential irrational sellers, while the lack of same was said to indicate a market dominated by hard-headed professional investors who were unemo- tionally taking advantage of the bargains created by previous waves of speculative selling. This perception is firmly grounded in the standard literature, going back to John MacKay's narrations of the Holland Tullip Bulb Mania and the South Sea Bubble, and continuing through the various histories of the 1929 stock market crash. It has its roots in a fundamental perception which acknowledges that among the baser human emotions are fear and greed, and that these emotions, in varying degrees, tend to reflect themselves in financial markets where the partici- pants are, after all, individual humans. The technician is, by one definition, indirectly a market psychologist. It is his task to develop quantitative indicators which measure the sort of emotional factors discussed above. A recent prob- lem is that many such quantitative indicators, especially those developed in the 1940's and 1950's, are turning out to be somewhat less than useful at the moment. For many years, the level of American Stock Exchange volume, for example, was an excellent proxy for speculative activity. Today, interpreted in conventional terms, that indicator would suggest that almost no speculation -existealort11ebetterpa-rrof-a-.lecHde–Durin-g-this-supposedly American Stock Exchange Market Value index has advanced 475 in an almost uninterrupted six- year cycle during a time when most other market indicators were doing very little. The exception- al market performance of secondary stocks in general, the sort of stocks that are supposedly the focus of purely speculative interest is, of course, a well-documented fact. With the confusing picture being painted by these indicators, the question of the existence of speculation or lack thereof becomes, as we suggested, particularly interesting. The proper answer must, we think, involve a return to psychology. Investment is, essentially, the intelligent balance of risk versus reward. The sort of speculative activity considered bad in the classical percep- tion is characterized by the presence of large numbers of investors who, for one reason or another, are deluded into focusing their attention solely OJ1 the reward while ignoring the risk. This delu- sion can take many forms. There is little qualitative difference between the individuals who thought it perfectly safe to purchase stocks on 10 margin in 1929 and the professionals who created high-minded rationalizations for buying growth stocks at 50-100 times earnings in 1972. Both were concentrating on reward and ignoring risk. On a purely intuitive basis, we are not entirely certain that this sort of thing exists to an excessive degree in today's stock market. That activity involving risk, in some cases high risk, abounds, cannot be denied, as secondary-stock performance, options volume, and other indicators clearly demonstrate. We have, in the past, expressed the belief, however, that, following a decade of obvious exodus by individuals from the stock market, the surviving stock-market investor is a hardy breed. We suspect that his very survival indicates that his risk-awareness remains a well- developed instinct. To find examples of lack of risk-awareness and excessive reward-obsession today, we think one must range far afield from the stock market into markets -for other financial assets. It is – possible to wonder, for example, about the degree of risk-awareness being demonstrated by inves- tors in such areas as precious metals, art, and other collectables. The most dangerous sort of market, of course, is the one where the conventional wisdom of just about every participant sug- gests that the direction of prices can only be upward in an unending curve extending into the indefinite future. For an example of a market that fits that definition in 1980, how about residen- tial real estate The existence of speculative activity in other areas, of course, may be precisely what has confused the stock market scene. What the eventual interrelationship will be is a question which remains unanswered. Dow-Jones Industrials (12 00 PM) 958.96 S & P Composite (12 00 PM) 131. 17 ANTHONY W. TABELL DELAFIELD, HARVEY, TAB ELL Cumulative Index (10/9/80) 1022.34 AWTsla I No lfotemenl Qf ew.preulon of opinion or any other motler herein contolned or 1 to be deemed 10 be, directly or mdlrectly, on offer or the SOllcltotlon of on offer to b\Jy Of leU ony security referred to or menltcmed The maUer 15 presenled merely fo' the convertencc of the subscrtber Whtle e believe the sources of our information to be rei table, we In no way represent or guarantee the accuracy thereof nor of the statements mude herein Any aellon to be taken by the subscrtber should be ba!.ed on hiS own investIgation and Informallon Janney Montgomery Scoll, Inc, os a corporation, and Its officers or employees, may now have, or may laler take, positions or trodes In respect to any securohes mentioned In thiS or any future luue, ond such pas Ilion moy be different from any views now or hereafter e)!prcssed m thiS or any other I!.sue Janney Montgomery Scott, Inc, which IS regIstered With the SEC os on mvestment adVisor, may give odvlce to liS mvestment adVisory and other customers mdependently of any statements made ,n thIS or m any other Issue Further information on any sccury mentioned herein IS ovculable on request