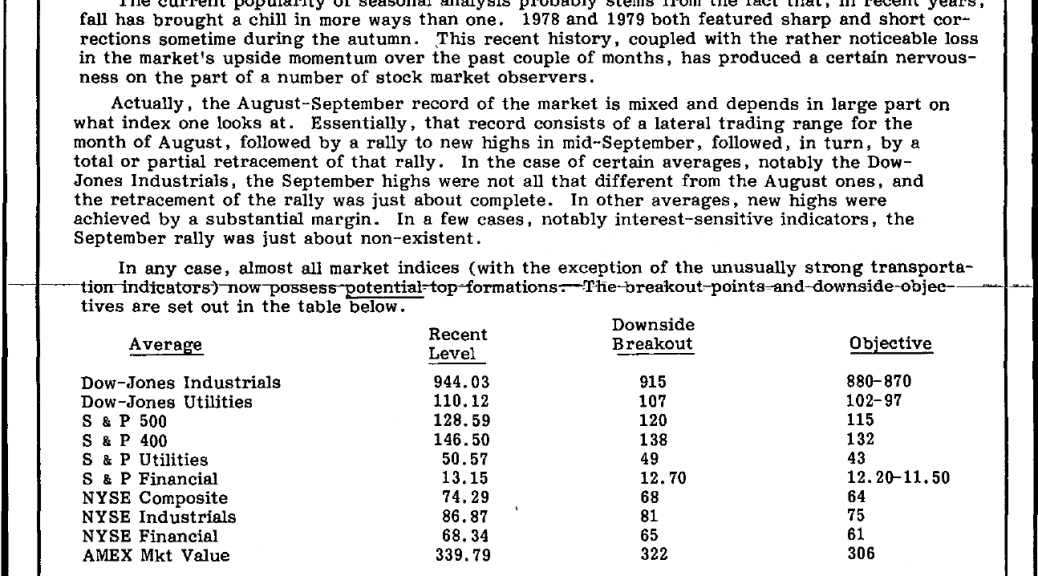 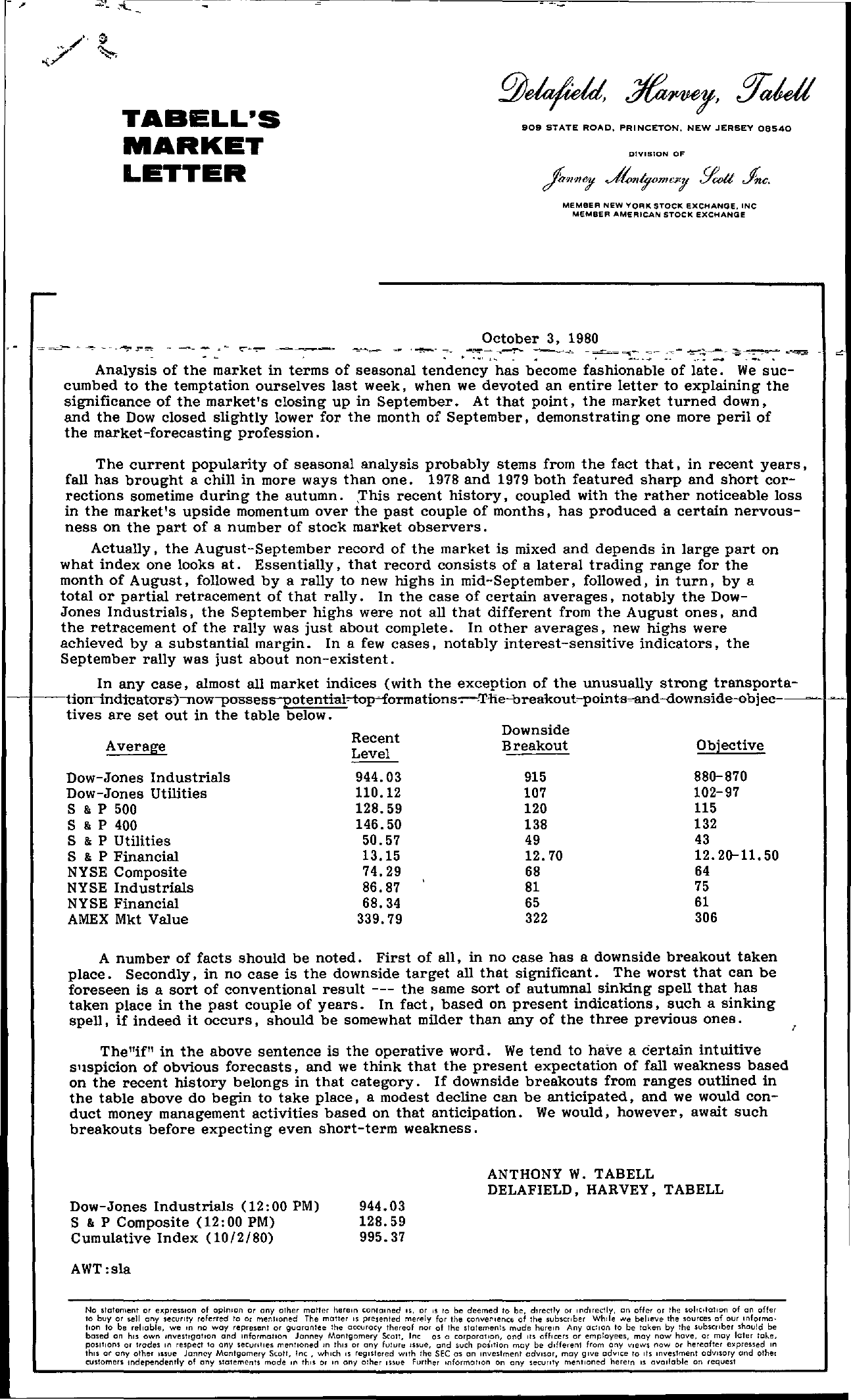 TABELL'S MARKET LETTER 909 STATE ROAD, PRINCETON, NEW JERSEY 08540 DIVISION OF MEMBER NEW YORK STOCK eXCHANGE. INC MEMBER AMERICAN STOCK eXCHANGE – —-''.J – -'– October 3, 1980 Analysis of the market in terms of seasonal tendency has become fashionable of late. We succumbed to the temptation ourselves last week, when we devoted an entire letter to explaining the significance of the market's closing up in September. At that point, the market turned down, and the Dow closed slightly lower for the month of September, demonstrating one more peril of the market-forecasting profession. The current popularity of seasonal analysis probably stems from the fact that, in recent years, fall has brought a chill in more ways than one. 1978 and 1979 both featured sharp and short corrections sometime during the autumn. ,This recent history, coupled with the rather noticeable loss in the market's upside momentum over the past couple of months, has produced a certain nervousness on the part of a number of stock market observers. Actually, the August-September record of the market is mixed and depends in large part on what index one looks at. Essentially, that record consists of a lateral trading range for the month of August, followed by a rally to new highs in mid-September, followed, in turn, by a total or partial retracement of that rally. In the case of certain averages, notably the DowJones Industrials, the September highs were not all that different from the August ones, and the retracement of the rally was just about complete. In other averages, new highs were achieved by a substantial margin. In a few cases, notably interest-sensitive indicators, the September rally was just about non-existent. In any case, almost all market indices (with the exception of the unusually strong transporta- l- tives are set out in the table below. Average Recent Level Downside Breakout Objective Dow-Jones Industrials Dow-Jones Utilities S & P 500 S & P 400 S & P Utilities S & P Financial NYSE Composite NYSE Industrials NYSE Financial AMEX Mkt Value 944.03 110.12 128.59 146.50 50.57 13.15 74.29 86.87 68.34 339.79 915 107 120 138 49 12.70 68 81 65 322 880-870 102-97 115 132 43 12.20-11.50 64 75 61 306 A number of facts should be noted. First of all, in no case has a downside breakout taken place. Secondly, in no case is the downside target all that significant. The worst that can be foreseen is a sort of conventional result — the same sort of autumnal sinking spell that has taken place in the past couple of years. In fact, based on present indications, such a sinking spell, if indeed it occurs, should be somewhat milder than any of the three previous ones. 1 Theif in the above sentence is the operative word. We tend to have a certain intuitive s'lspicion of obvious forecasts, and we think that the present expectation of fall weakness based on the recent history belongs in that category. If downside breakouts from ranges outlined in the table above do begin to take place, a modest decline can be anticipated, and we would conduct money management activities based on that anticipation. We would, however, await such breakouts before expecting even short-term weakness. Dow-Jones Industrials (1200 PM) S & P Composite (12 00 PM) Cumulative Index (10/2/80) AWTsla 944.03 128.59 995.37 ANTHONY W. TABELL DELAFIELD, HARVEY, TABELL No statement or c)(preSSlon of opInion or any other motter hercln contolned I, or IS to be deemed to be, directly or ,ndlrec!ly, on offer or the soitcltatlon of on offer 10 buy or sell cny security referred to Or menhoned The mOiler IS presented merely for the (onverlenCE of Ihe ubscrlber While we believe Ihe sources of our Informa han 10 be reliable, we In no way represent or guoronlee the accuracy thereof nor of the ml,lde herein Any acllon to be token by the subSCriber shOUld be based on hiS own inVestigation and Informollon Janney Montgomery Scolt, Inc as a corporation, and 115 off'cers or employees, may now have, or may loler lole, POSitiOns or Irades In respect 10 any seCUrities mentioned In thiS or any future Issue, and such pOSition may be different from any views now or hereafter expressed In thiS or any other Issue Janney Montgomery Scott, Inc, wtllch ,s registered With the SEC os on Investment odvlsor, may give adVice to ItS Investment adVisory and othe. customers Independently of any statements mode ,n thiS or In any other Issue further 'nformotlon on any security mentioned herern IS ovollable on request