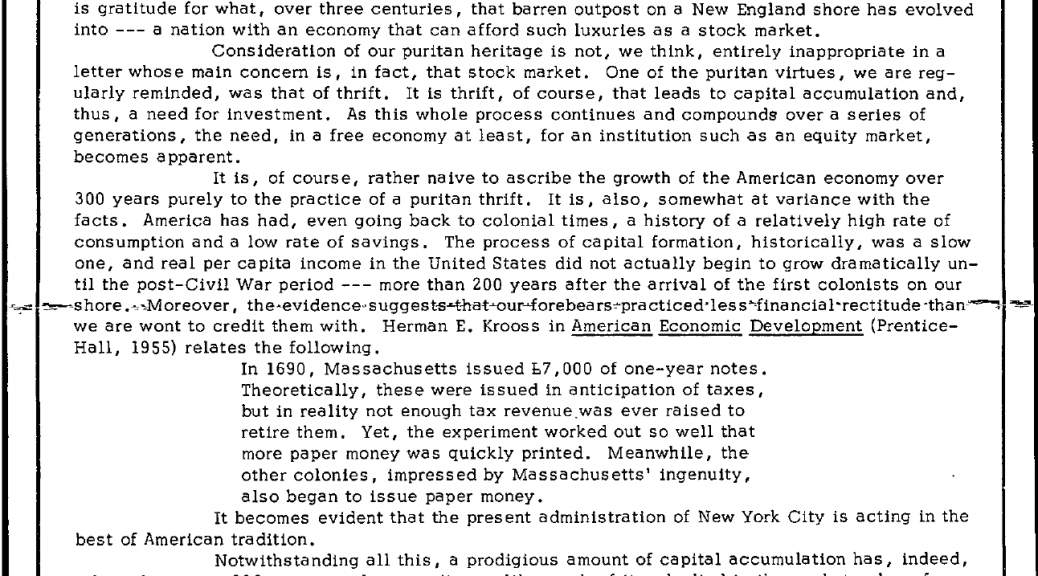 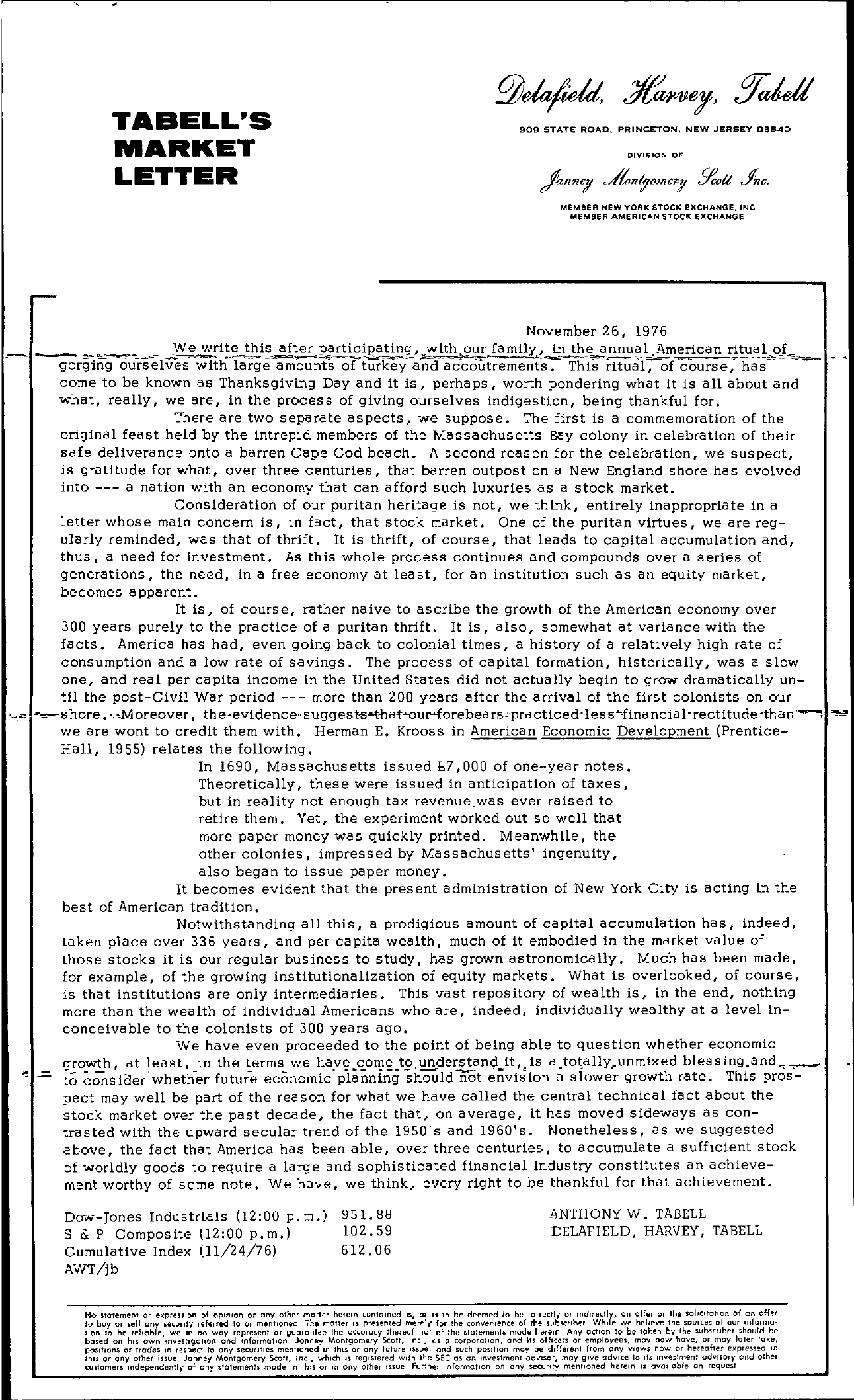 TABELL'S MARKET LETTER 909 STATE ROAD, PRINCETON. NEW JERSEY OB540 DIVISION OF MEMBER NEW YORK STOCK EXCHANGE. INC MEM8ER AMERICAN STOCK eXCHANGE – '- November 26, 1976 We write this after participating, with our family, in the annual American ritual of ''-..-'– …….-. -.,..–…- '- . – –.-…;….– ,,–… ———–.– -,- – —-'-.–'-.– gorging ourselves with large amounts of turkey and accoutrements. This ritual, of course; has-' -, come to be known as Thanksgiving Day and it is, perhaps, worth pondering what it is all about and what, really, we are, in the process of giving ourselves indigestion, being thankful for. There are two separate aspects, we suppose. The first is a commemoration of the original feast held by the intrepid members of the Massachusetts Bay colony in celebration of their safe deliverance onto a barren Cape Cod beach. A second reason for the celebration, we suspect, is gratitude for what, over three centuries, that barren outpost on a New England shore has evolved into — a nation with an economy that can afford such luxuries as a stock market. Consideration of our puritan heritage is not, we think, entirely inappropriate in a letter whose main concern is, in fact, that stock market. One of the puritan virtues, we are reg- ularly reminded, was that of thrift. It is thrift, of course, that leads to capital accumulation and, thus, a need for investment. As this whole process continues and compounds over a series of generations, the need, in a free economy at least, for an institution such as an equity market, becomes apparent. It is, of course, rather naive to ascribe the growth of the American economy over 300 years purely to the practice of a puritan thrift. It is, also, somewhat at variance with the facts. America has had, even going back to colonial times, a history of a relatively high rate of consumption and a low rate of savings. The process of capital formation, historically, was a slow one, and real per capita income in the United States did not actually begin to grow dramatically un- til the post-Civil War period — more than 200 years after the arrival of the first colonists on our ,shore .Moreover, the-evidence suggests4hatour-'forebea rs-practiced'les s-financia I-rectitude ,than' ….. we are wont to credit them with. Herman E. Krooss in American Economic Development (Prentice- Hall, 1955) relates the following. In 1690, Massachusetts issued 7,000 of one-year notes. Theoretically, these were issued in anticipation of taxes, but in reality not enough tax revenue,was ever raised to retire them. Yet, the experiment worked out so well that more paper money was quickly printed. Meanwhile, the other colonies, impressed by Massachusetts' ingenuity, also began to issue paper money. It becomes evident that the present administration of New York City is acting in the best of American tradition. Notwithstanding all this, a prodigious amount of capital accumulation has, indeed, taken place over 336 years, and per capita wealth, much of it embodied in the market value of those stocks it is our regular business to study, has grown astronomically. Much has been made, for example, of the growing institutionalization of equity markets. What is overlooked, of course, is that institutions are only intermediaries. This vast repository of wealth is, in the end, nothing more than the wealth of individual Americans who are, indeed, individually wealthy at a level in- conceivable to the colonists of 300 years ago. We have even proceeded to the point of being able to question whether economic growth, at least, in the terms we ha—,,-o.lll,u-,,.\!!1-der!!.anr;l.it,.iS a.to!allYrunmixd blessing.and, , ,to cons'iaer-wheth-er futur-e economic planning should not envision a slower growth rate. This pros- pect may well be part of the reason for what we have called the central technical fact about the stock market over the past decade, the fact that, on average, it has moved sideways as con- trasted with the upward secular trend of the 1950's and 1960's. Nonetheless, as we suggested above, the fact that America has been able, over three centuries, to accumulate a sufhcient stock of worldly goods to require a large and sophisticated financial industry constitutes an achieve- ment worthy of some note. We have, we think, every right to be thankful for that achievement. Dow-Jones Industrials (1200 p.m.) S & P CompOSite (1200 p.m.) Cumulative Index (11/24/76) AWT/jb 951.88 102.59 612.06 ANTHONY W. TABELL DELAFIELD, HARVEY, TABELL No statement or expreSSion of opiniOn or any olher matler herein contained IS, or IS to be deemed 10 be, dneClly or Ind,rectly, en offer or 'he Ollcltollon of on offer to buy or sell ony security referred 10 or mentioned The naIler IS presented merely for Ihe converlence of the subscnber While He believe the ources of our information to be rehoble, we m no way represent or guorantee the accuracy thereof nor of the statements mode herem Anv action to be token by the subscriber should be bosed on hiS own Investlgotlon nd Informotlon Janney Montgomery Scott, tnc, os a corporation, and lis offICers or employees, may now have, or moy later take, poSitions or trades In respect to any securities mentioned In thiS or any future Issue, ond such pOSition may be different from any views now or hereafter expressed ,1'1 thiS or 01'1'1 other Issue Janney Montgomery Scott, Inc, which IS registered With le SEC as on Investment adVisor, moy gIVe adVice to Its Investment odvisory and Olher customers Independently of ony stotements mode In thrs or In any other Issue Further Informotlon on any secuflty mentioned herein IS avolloble on request