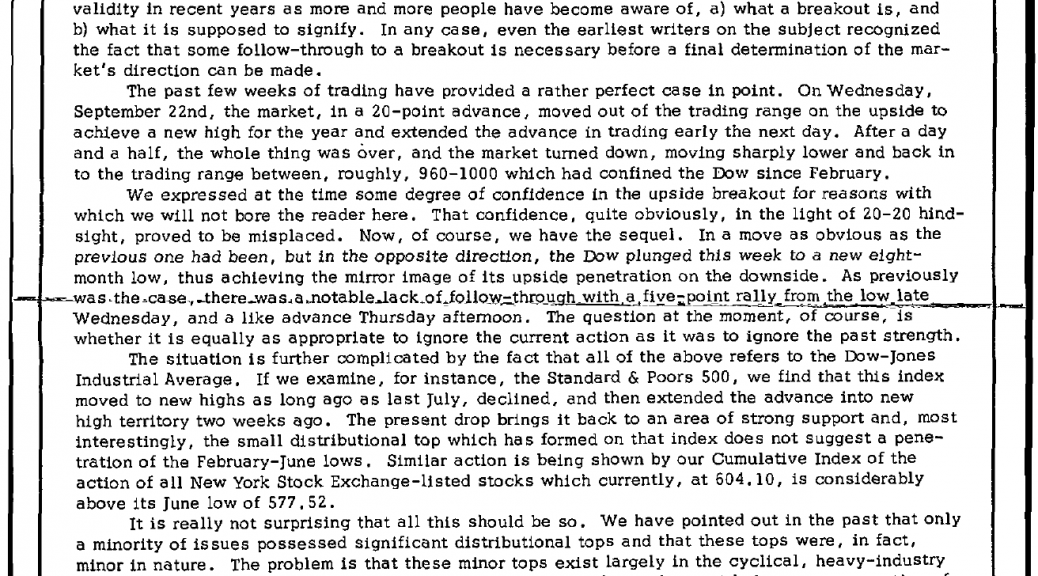 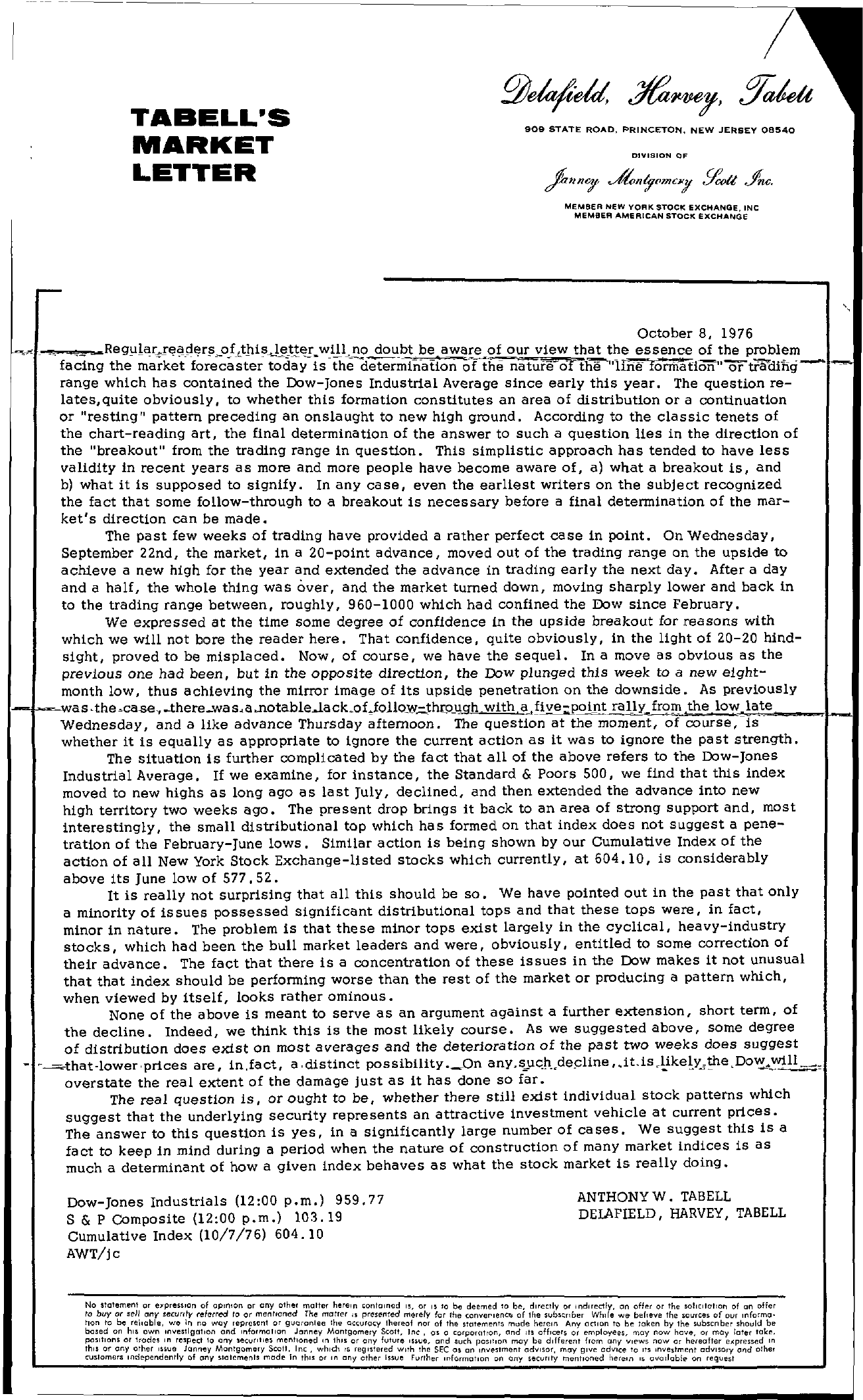 TABELL'S MARKET LETTER 909 STATE ROAD, PRINCETON, NEW JESEY 08540 DIVISION OF MEMBER NEW YORK STOCK EXCHANGE, INC MEMBER AMERICAN STOCK eXCHANGE October 8, 1976 f..'….,,….., .Re'glllarcJ-eldE!r'orLtlljsleot!.wi!l,.!l.ubt be aware of our view that the essence of the problem facing the ster today is the determination of the nature of th3line- formation or'tri3'i!ln(;–I-1 range which has contained the Dow-Jones Industrial Average since early this year. The question re- lates,quite obviously, to whether this formation constitutes an area of distribution or a continuation or resting pattern preceding an onslaught to new high ground. According to the classic tenets of the chart-reading art, the final determination of the answer to such a question lies in the direction of the breakout from the trading range in question. This Simplistic approach has tended to have less validity in recent years as more and more people have become aware of, a) what a breakout is, and b) what it is supposed to signify. In any case, even the earliest writers on the subject recognized the fact that some follow-through to a breakout is necessary before a final determination of the mar- ket's direction can be made. The past few weeks of trading have provided a rather perfect case in point. On Wednesday, September 22nd, the market, in a 20-point advance, moved out of the trading range on the upside to achieve a new high for the year and extended the advance in trading early the next day. After a day and a half, the whole thing was over, and the market turned down, moving sharply lower and back in to the trading range between, roughly, 960-1000 which had confined the Bow since February. We expressed at the time some degree of confidence in the upside breakout for reasons with which we will not bore the reader here. That confidence, quite obviously, in the light of 20-20 hind- Sight, proved to be misplaced. Now, of course, we have the sequel. In a move as obvious as the previous one had been, but in the opposite direction, the Dow plunged this week to a new eight- month low, thus achieving the mirror image of its upside penetration on the downside. As previously -.ILI1—1Alas -the,ca,ge.,therewas'.Jloltal),'..l'3C.()f.fllcLW.tII9cJh..YjQ!4,fi.E()l.!!lIW- Wednesday, and a like advance Thursday afternoon. The question at the moment, course, whether it is equally as appropriate to ignore the current action as it was to ignore the past strength. The Situation Is further complicated by the fact that all of the above refers to the DoW-Jones Industrial Average. If we examine, for instance, the Standard & Poors 500, we find that this index moved to new highs as long ago as last July, declined, and then extended the advance into new high territory two weeks ago. The present drop brings It back to an area of strong support and, most interestingly, the small distributional top which has formed on that index does not suggest a pene- tration of the February-June lows. Similar action Is being shown by our Cumulative Index of the action of all New York Stock Exchange-listed stocks which currently, at 604.10, is considerably above its June low of 577 . 52. It is really not surprising that all this should be so. We have pointed out in the past that only a minority of Issues possessed Significant distributional tops and that these tops were, in fact, minor in nature. The problem is that these minor tops exist largely In the cyclical, heavy-industry stocks, which had been the bull market leaders and were, obviously, entitled to some correction of their advance. The fact that there is a concentration of these Issues in the Dow makes it not unusual that that index should be performing worse than the rest of the market or producing a pattern which, when viewed by itself, looks rather ominous. None of the above is meant to serve as an argument against a further extenSion, short term, of the decline. Indeed, we think this is the most likely course. As we suggested above, some degree of distribution does exist on most averages and the deterioration of the past two weeks does suggest -that-lower'prices are, in.fact, a ,distinct possibility.On any.uch.declineit,isikey-,!he, will overstate the real extent of the damage just as It has done so far. The real question is, or ought to be, whether there still exist individual stock patterns which suggest that the underlying security represents an attractive investment vehicle at current prices. The answer to this question is yes, in a significantly large number of cases. We suggest this is a fact to keep in mind during a period when the nature of construction of many market Indices is as much a determinant of how a given index behaves as what the stock market is really doing, Dow-Jones Industrials (1200 p.m.) 959.77 S & P Composite (1200 p.m.) 103.19 Cumulative Index (10/7/76) 604 10 AWT/jc ANTHONY W. TABELL DELAFIELD, HARVEY, TABELL No statement or e)fpreSlon of opinion or any other matter herein cantolned IS, ar IS to' be deemed to' be, directly or II'ldll'ectly, an affer ar the sail citation of an offer to buy or el/ any secunty referred to or mentioned The matrer IS presented merely for the conver-Iena. of the Sub5rlber While we believe the sources of our Informalion to be rel,cble, we In nO' wcy represent er guarantee the occ;uroc;y thereof nor of the statements mude herelrl Any octlen to be taken by the subscnber should be based an hi! awn Investlgatlan end Infarmotlan Janney Montgomery Scott, Inc, as a corporCltlan, and Its offlcers or employees, may now have, or may later take, positions or trades Irl respect to any sec;unlles mentlened If'! thiS or ony future Issue, and uch pOSitIOn may be different frem any …..,ews new or hereafter expressed In tt-IIS or ony other Issue Janney Montgomery Scell, Inc, which IS registered With tht! SEC as an Investm(!nt adViser, may 9,ve adVice 10 Its Investment adVisory and othe! customers Independently of any statements mode In thiS or In any other Issue Further informatIOn en ony security mentlened herelll IS available an request