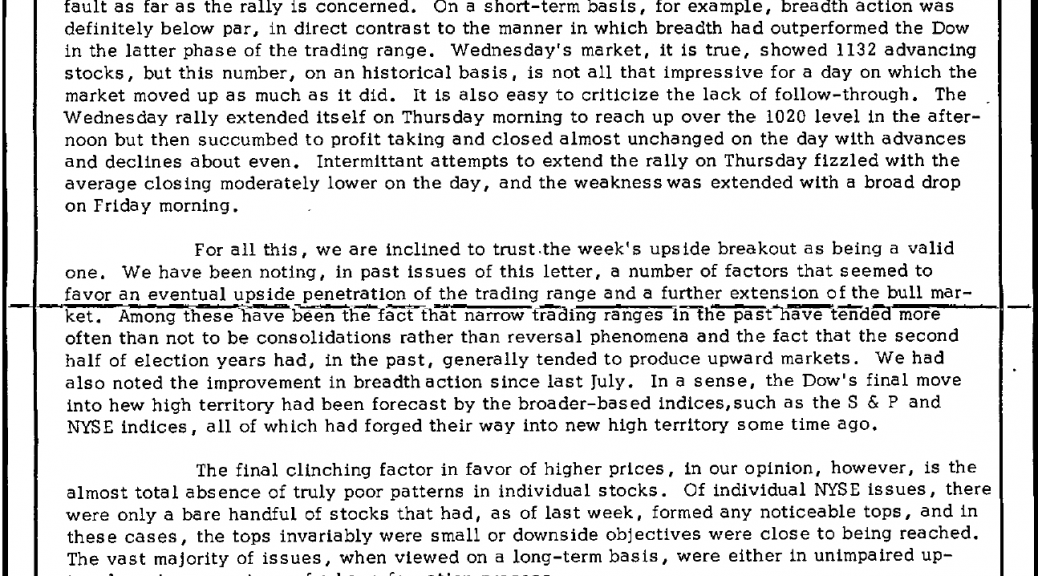 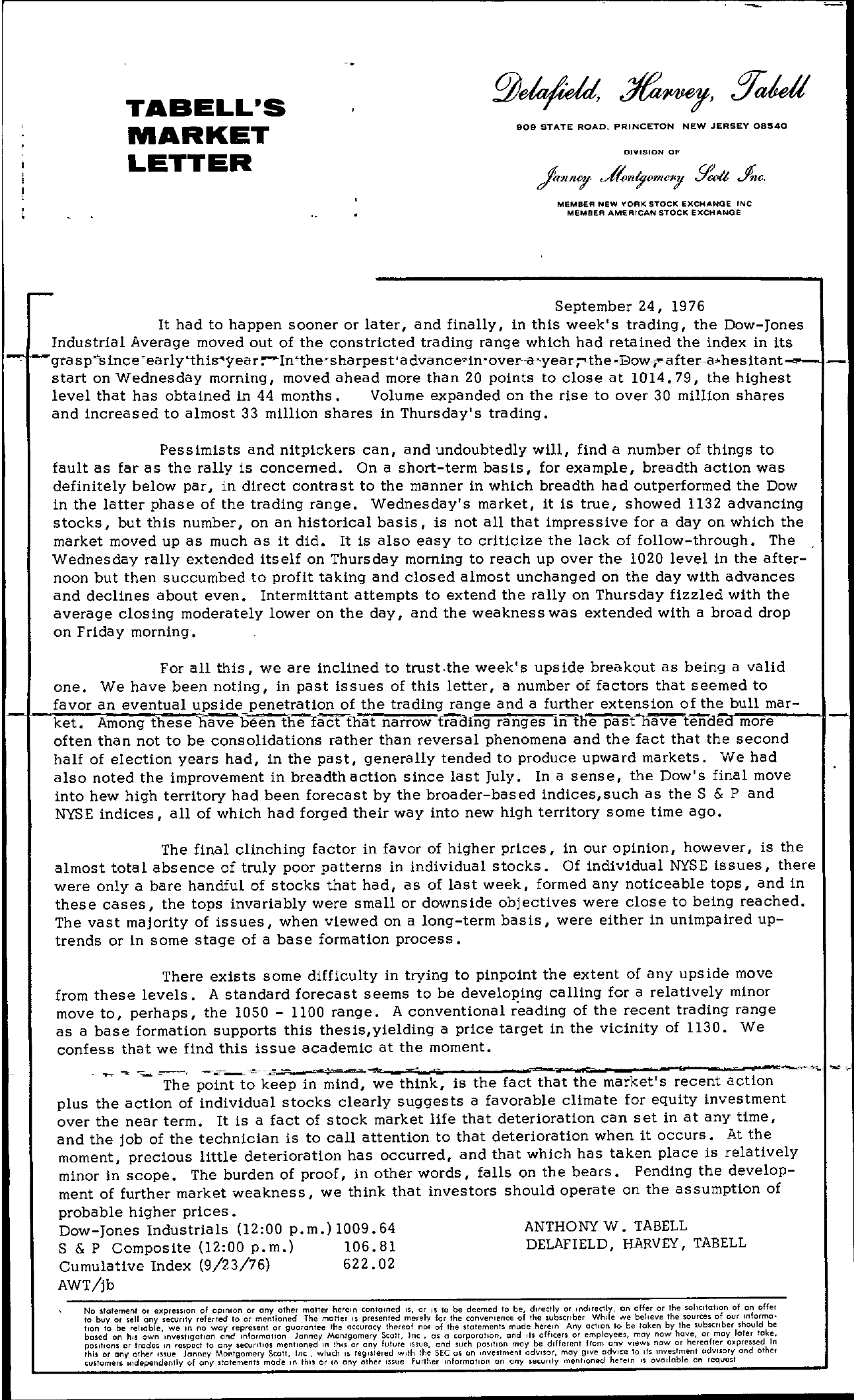 TABELL'S MARKET LETTER 909 STATE ROAD, PRINCETON NEW JERSEY 08540 DIVISION OF MEMBER NEW YORK STOCK EXCHANGE INC MEMBER AMERICAN STOCK EXCHANGE September 24, 1976 It had to happen sooner or later, and finally, in this week's trading, the Dow-Jones Industrial Average moved out of the constricted trading range which had retained the index in its —grasp-sincBearlythisyear-In'theJsharpest'advancein'over–ayear-;,,-theBow,-after-ahesitant'—I start on Wednesday morning, moved ahead more than 20 pOints to close at 1014.79, the highest level that has obtained in 44 months. Volume expanded on the rise to over 30 million shares and increased to almost 33 million shares In Thursday's trading. Pessimists and nitpickers can, and undoubtedly will, find a number of things to fault as far as the rally is concerned. On a short-term basis, for example, breadth action was definitely below par, in direct contrast to the manner in which breadth had outperformed the Dow in the latter phase of the trading range. Wednesday's market, it is true, showed 1132 advancing stocks, but this number, on an historical basis, is not all that impressive for a day on which the market moved up as much as it did. It is also easy to criticize the lack of follow-through. The Wednesday rally extended itself on Thursday morning to reach up over the 1020 level in the afternoon but then succumbed to profit taking and closed almost unchanged on the day with advances and declines about even. Intermittant attempts to extend the rally on Thursday fizzled with the average closing moderately lower on the day, and the weakness was extended with a broad drop on Friday morning. For all this, we are inclined to trust.the week's upside breakout as being a valid one. We have been noting, in past issues of this letter, a number of factors that seemed to favor an eventual upside penetration of the trading range and a further extension of the bull market. Among these -h8Vebeen the-fact fhat narrow trading ranges in Hie pastnave tended more often than not to be consolidations rather than reversal phenomena and the fact that the second half of election years had, in the past, generally tended to produce upward markets. We had also noted the improvement in breadth action since last July. In a sense, the Dow's final move Into hew high territory had been forecast by the broader-based indices,such as the S & P and NYSE indices, all of which had forged their way into new high territory some time ago. The final clinching factor in favor of higher prices, in our opinion, however, is the almost total absence of truly poor patterns in individual stocks. Of individual NYSE issues, there were only a bare handful of stocks that had, as of last week, formed any noticeable tops, and in these cases, the tops invariably were small or downside objectives were close to being reached. The vast majority of issues, when viewed on a long-term basis, were either in unimpaired uptrends or in some stage of a base formation process. There exists some difficulty in trying to pinpoint the extent of any upside move from these levels. A standard forecast seems to be develoing calling for a relatively minor move to, perhaps, the 1050 – 1100 range. A conventional reading of the recent trading range as a base formation supports this thesis, yielding a price target in the vicinity of 1130. We confess that we find this issue academic at the moment. ,…,- -0 -;…. — .o- v ………………. -.c- 1'!l –;..- The point to keep in mind, we think, is the fact that the market's recent action plus the action of individual stocks clearly suggests a favorable climate for equity investment over the near term. It is a fact of stock market life that deterioration can set in at any time, and the job of the technician is to call attention to that deterioration when it occurs. At the moment, precious little deterioration has occurred, and that which has taken place is relatively minor In scope. The burden of proof, in other words, falls on the bears. Pending the develop- ment of further market weakness, we think that investors should operate on the assumption of probable higher prices. Dow-Jones Industrials (1200 p.m.) 1009.64 S & P Composite (1200 p.m.) 106.81 ANTHONY W. TABELL DELAFIELD, HARVEY, TABELL Cumulative Index (9/23/76) 622.02 AWT/jb No stolement or expression of opinion or ony other moNer herein conlOlned IS, or 15 to be deemed 10 be, dlrelly or md.rec1ly, on offer or the sohltahon of on oHer to buy or sell ony secvnly referred 10 or menlioned The molter IS presented merely for Ihe conVe(llenCE of the subscflber While we believe Ihe sources of our Informo- lion 10 be reliable, we In no woy represenl or guarantee Ihe occurocy thereol nor of the statements mude herein Any action to be taken by the subscriber should be bosed on hiS own IIwestlgatlon and Informallon Janney Montgomery Seal!, Inc, as a corporohon, and lis officers or employees, may now hove, or moy loter toke, POSitions or trades In respect to any seCUrities mentioned In thiS or any future Issue, and such position moy be differenT from anv views now or hereafter epressed In Ihls or any other asue Jonney Montgomery SOOtT, Inc, which IS registered With the SEC as on Investment adVisor, may give odvlce to Its Investment odvlsory and athel customers Independently of ony statements mode In th or In any other 1Ue Further ,formation on any 5ecunty mentioned herein IS available on request