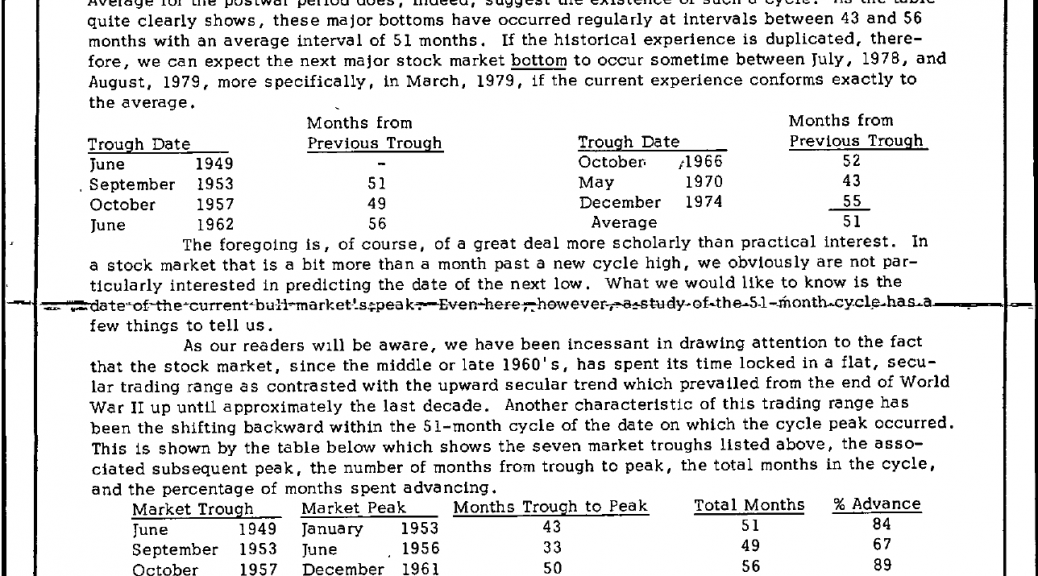 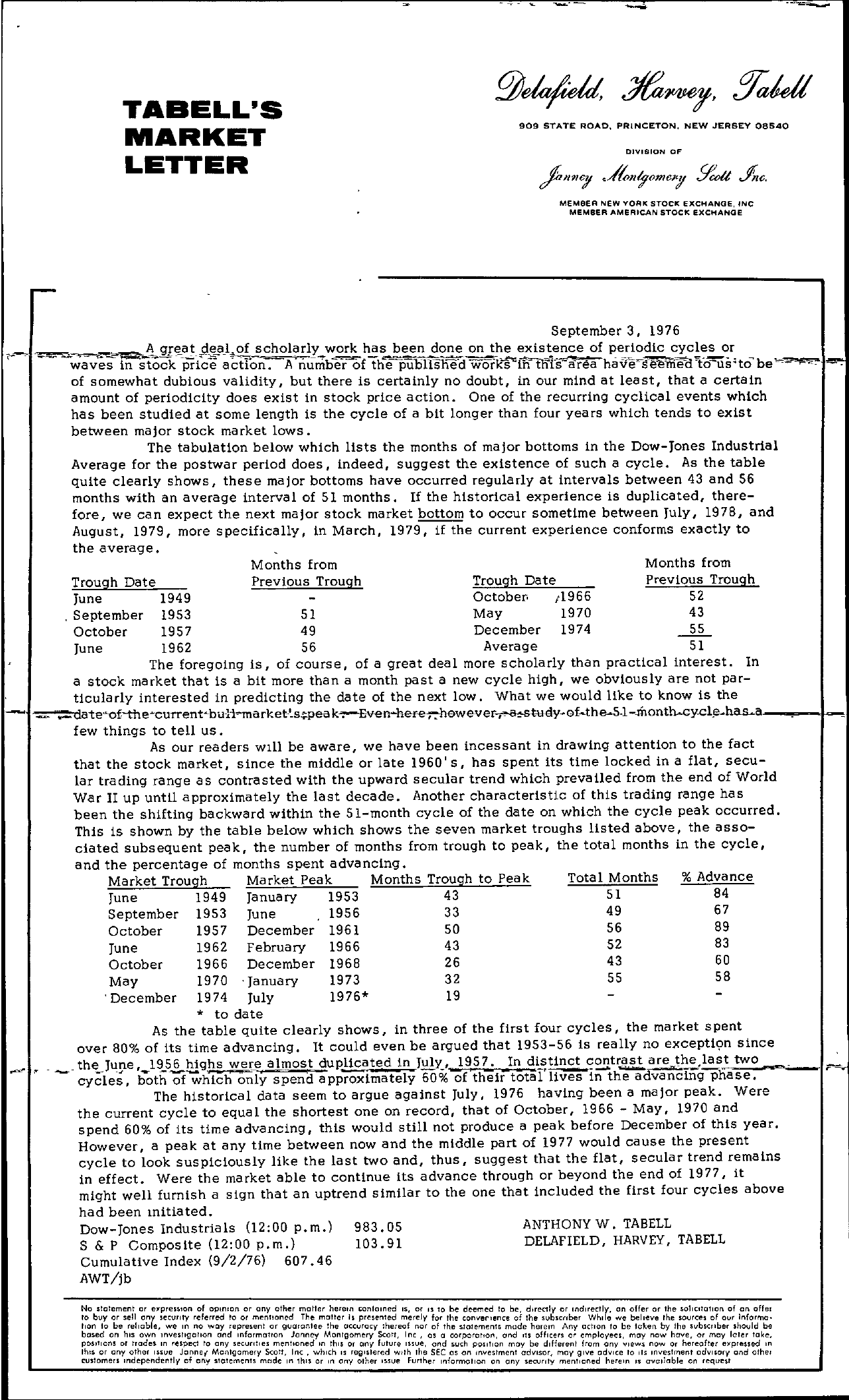 – . TABELL'S MARKET LETTER 909 STATE ROAD, PRINCETON, NEW JERSEY 08540 DIVISION OF MEM8ER NEW VORl( STOCK EXCHANGE, INC MEMBER AMERICAN STOCK EXCHANGE – , September 3, 1976 .. -,J\..gI,,-alJ1J.!–c;holarILwork hs been d on the exisence of periodic cycles or waves in stock price action. A numb,;r of the plilillsned woikii1 tl1fs-1l'rea havesee'rr'-ed't6iis'to-be-' of somewhat dubious validity, but there is certainly no doubt, in our mind at least, that a certain amount of periodicity does exist in stock price action. One of the recurring cyclical events which has been studied at some length is the cycle of a bit longer than four years which tends to exist ….., between major stock market lows. The tabulation below which lists the months of major bottoms in the Dow-Jones Industrial Average for the postwar period does, indeed, suggest the existence of such a cycle. As the table quite clearly shows, these major bottoms have occurred regularly at intervals between 43 and 56 months with an average interval of 51 months. If the historical experience is duplicated, there- fore, we can expect the next major stock market bottom to occur sometime between July, 1978, and August, 1979, more specifically, in March, 1979, if the current experience conforms exactly to the average. Months from Months from Trough Date Previous Trough Trough Date Previous Trough June 1949 – Octobe /1966 52 September 1953 51 May 1970 43 October 1957 49 December 1974 June 1962 56 Average 51 The foregoing is, of course, of a great deal more scholarly than practical interest. In a stock market that is a bit more than a month past a new cycle high, we obViously are not par- ticularly interested in predicting the date of the next low. What we would like to know is the 1—I'-'–dddteOf-thecurrentbuUmarket-s.;opeakn-her..,aver–,-..l,srutlyefthe-S.l.month-cy.cl.ehas..a,-..–! few things to tell us. As our readers WIll be aware, we have been incessant in drawing attention to the fact that the stock market, since the middle or late 1960' s, has spent its time locked in a flat, secular trading range as contrasted with the upward secular trend which prevailed from the end of World War II up untll approximately the last decade. Another characteristic of this trading range has been the shifting backward within the 51-month cycle of the date on which the cycle peak occurred. This is shown by the table below which shows the seven market troughs listed above, the associated subsequent peak, the number of months from trough to peak, the total months in the cycle, and the percentage of months spent advancing. Market Trough Market Peak Months Trough to Peak June 1949 January 1953 43 September 1953 June 1956 33 October 1957 December 1961 50 June 1962 February 1966 43 October 1966 December 1968 26 May 1970 'January 1973 32 Tota I Months 51 49 56 52 43 55 Advance 84 67 89 83 60 58 'December 1974 July 1976 19 to date As the table quite clearly shows, in three of the first four cycles, the market spent — over 80 of its time advancing. It could even be argued that 1953-56 is really no excepti,;m since th.Jul)-e ,195!.!Ughs were almost duplicated in July, 1957. In dictrast arerrthe.,I;;.a.;s.ttw…o;;'I'-',- cycles, both of which only spend approximately 60 of their total lives in the advancing phase. The historical data seem to argue against July, 1976 having been a major peak. Were the current cycle to equal the shortest one on record, that of October, 1966 – May, 1970 and spend 60 of its time advanCing, this would still not produce a peak before December of this year. However, a peak at any time between now and the middle part of 1977 would cause the present cycie to look suspiciously like the last two and, thus, suggest that the flat, secular trend remains in effect. Were the market able to continue its advance through or beyond the end of 1977, it might well furnish a sign that an uptrend similar to the one that included the first four cycles above had been mitiated. Dow-Jones Industrials (1200 p.m.) S & P CompOSite (1200 p.m.) Cumulative Index (9/2/76) 607.46 983.05 103.91 ANTHONY W. TABELL DELAFIELD, HARVEY, TABELL AWT/jb No stotement or eprenlon of opinIon or cny other matler heretn contolned IS, or IS to be deemed to be, dIrectly or Indirectly. on offer or the 501'C.totlon of on offef to buy or sell any 5ecvTlty referred la or mentioned The matter Is presented merely for the converlcnce of the subSCriber While we believe the sources of our Information ta be reliable, we In no way represent or guarantee the occvrocy thereof nor of the statements mude herein Any action to be token by the subSCriber should be based on hiS own mvestlgotlon and information Janney Montgomery Scott, Inc, as a corporat.on, and .ts officers or employees, may now have, or may later toke, POSITiOnS or trades In respect to cny seCUrities menlloned In thiS or any future Issue, cnd such position may be different from any views now or hereafter e)'pressed In thl or any other Issue Jonnc Montgomery Scott, Inc, whICh IS registered With the SEC as on Investment adVisor, may give adVice to lis Investment adVisory and othel customers Independently of any statements mode In thiS or In any other Issue Further information on cny security mentioned herein IS available on request