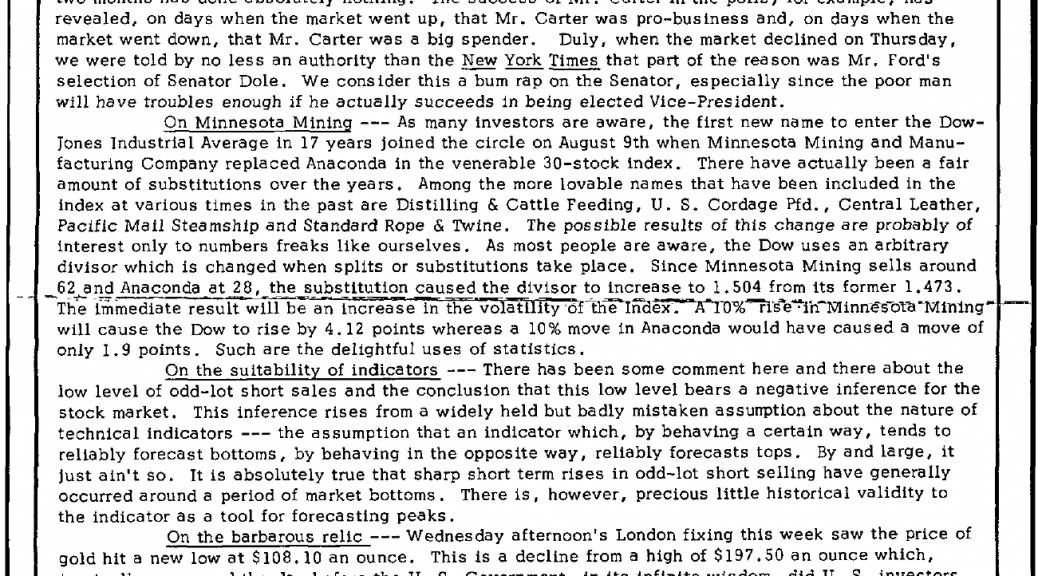 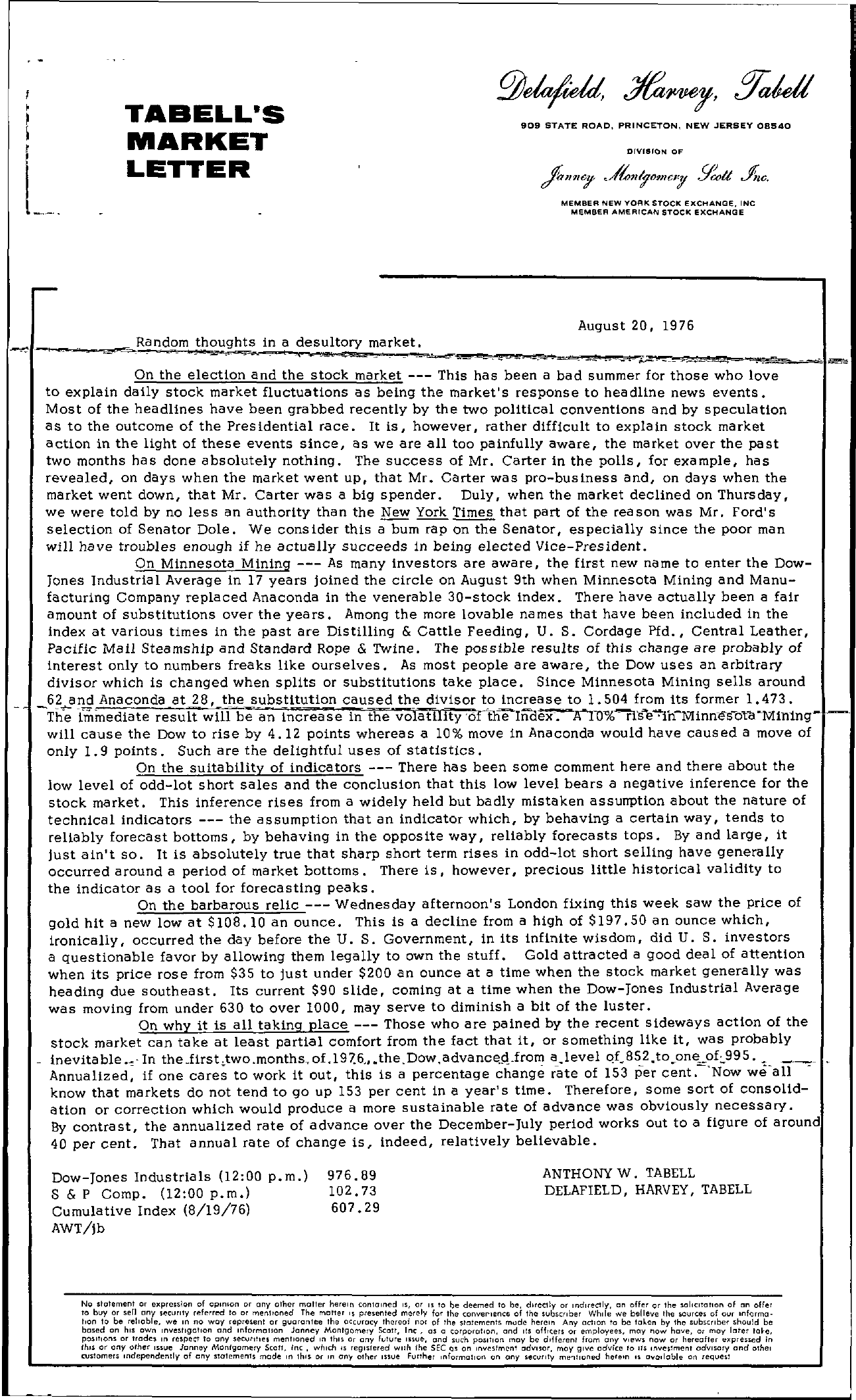 ,f \ L TABELLS MARKET LETTER 909 STATE ROAD, PRINCETON, NEW .JERSEY 08540 DIVISION OF MEMBER NEW VORl( STOCK EXCHANGE, INC MEMBER AMERICAN STOCK EXCHANGE – -! Random thoughts in a desultory market. August 20, 1976 On the election and the stock market — This has been a bad summer for those who love to explain daily stock market fluctuations as being the market's response to headline news events. Most of the headlines have been grabbed recently by the two political conventions and by speculation as to the outcome of the Presidential race. It is, however, rather difficult to explain stock market action in the light of these events since, as we are all too painfully aware, the market over the past two months has done absolutely nothing. The success of Mr. Carter in the polls, for example, has revealed, on days when the market went up, that Mr. Carter was pro-business and, on days when the market went down, that Mr. Carter was a big spender. Duly, when the market declined on Thursday, we were told by no less an authority than the New York Times that part of the rea son was Mr. Ford's selection of Senator Dole. We consider this a bum rap on the Senator, especially since the poor man will have troubles enough if he actually succeeds in being elected Vice-President. On Minnesota Mining — As many investors are aware, the first new name to enter the DowJones Industrial Average in 17 years joined the circle on August 9th when Minnesota Mining and Manufacturing Company replaced Anaconda in the venerable 30-stock index. There have actually been a fair amount of substitutions over the years. Among the more lovable names that have been included in the index at various times in the past are Distilling & Cattle Feeding, U. S. Cordage Pfd., Central Leather, Pacific Mail Steamship and Standard Rope & Twine. The possible results of this change are probably of interest only to numbers freaks like ourselves. As most people are aware, the Dow uses an arbitrary divisor which is changed when splits or substitutions take place. Since Minnesota Mining sells around 62 and Anaconda at 28, the substitution caused the divisor to increase to 1.504 from its former 1.473. -Th iinediate result will be an increase in the volatility onhe-Index. A–TOrrse!'-ih-Nllnnes-oUI L Mln1ng-ewill cause the Dow to rise by 4.12 pOints whereas a 10 move in Anaconda would have caused a move of only 1.9 points. Such are the delightful uses of statistics. On the suitability of indicators — There has been some comment here and there about the low level of odd-lot short sales and the conclusion that this low level bears a negative inference for the stock market. This inference rises from a widely held but badly mistaken assunption about the nature of technical indicators — the assumption that an indicator which, by behaving a certain way, tends to reliably forecast bottoms, by behaving in the opposite way, reliably forecasts tops. By and large, it just ain't so. It is absolutely true that sharp short term rises in odd-lot short selling have generally occurred around a period of market bottoms. There is, however, precious little historical validity to the indicator as a tool for forecasting peaks. On the barbarous relic — Wednesday afternoon's London fixing this week saw the price of gold hit a new low at 108.10 an ounce. This is a decline from a high of 197.50 an ounce which, ironically, occurred the day before the U. S. Government, in its infinite wis dom, did U. S. investors a questionable favor by allowing them legally to own the stuff. Gold attracted a good deal of attention when its price rose from 35 to just under 200 an ounce at a time when the stock market generally was heading due southeast. Its current 90 slide, coming at a time when the Dow-Jones Industrial Average was moving from under 630 to over 1000, may serve to diminish a bit of the luster. On why it is all taking place — Those who are pained by the recent sideways action of the stock market can take at least partial comfort from the fact that it, or something like it, was probably inevitable .. In the.first .two.months, of.19(6.,.the.Dow,advance!Lfrom a.level of.852.to.one.of995.. . . Annualized; if one care to work it out, this is a percentage change rate of 153 per cent.-'Now we-all know that markets do not tend to go up 153 per cent in a year's time. Therefore, some sort of consolidation or correction which would produce a more sustainable rate of advance was obviously necessary. By contrast, the annualized rate of advance over the December-July period works out to a figure of around 40 per cent. That annual rate of change is, indeed, relatively believable. Dow-Jones Industrials (1200 p.m.) S & P Compo (1200 p.m.) Cumulative Index (8/19/76) AWT/jb 976.89 102.73 607.29 ANTHONY W. TABELL DELAFIELD, HARVEY, TABELL No stotement or expression of opinion or any alher matter herein conlolned IS, or IS to be deemed to be, dHeclly or Indirectly, on offer or the sollcltotlon of on offer to buy or sell anr. security referred to or menl!oned The molter IS presented mer(!ly for the converlence of the subSC(lber While -Ne believe the r.ources of our information to be rellob e, we In no way repreent or guarantee the accuracy th(!reof nor of the statements mode herein Any actIOn to be toen by the subsc(lber should be bosed on hiS own inVestigation ond Informollon Janney Montgomery Scott, Inc, as a corporatIon, and Its offtcers or employees, may now have, or may later toe, pOSitIOns or trades In respect 10 any securItIes mentioned In thiS or any future ISHle, and such POSITion may be dIfferent from any VH!W now or hereafter expressed In thiS Of any other Issue Jonney Montgomery SCali, Inc, which IS registered WITh Ihe SEC (IS on Invesfm(!nf adVisor, may give advice to ItS InvesTment adVISory and othel customers Independently of any statements mode In thiS or In any other Inue Further mformatlon on any security me'ltloned herem IS available on request