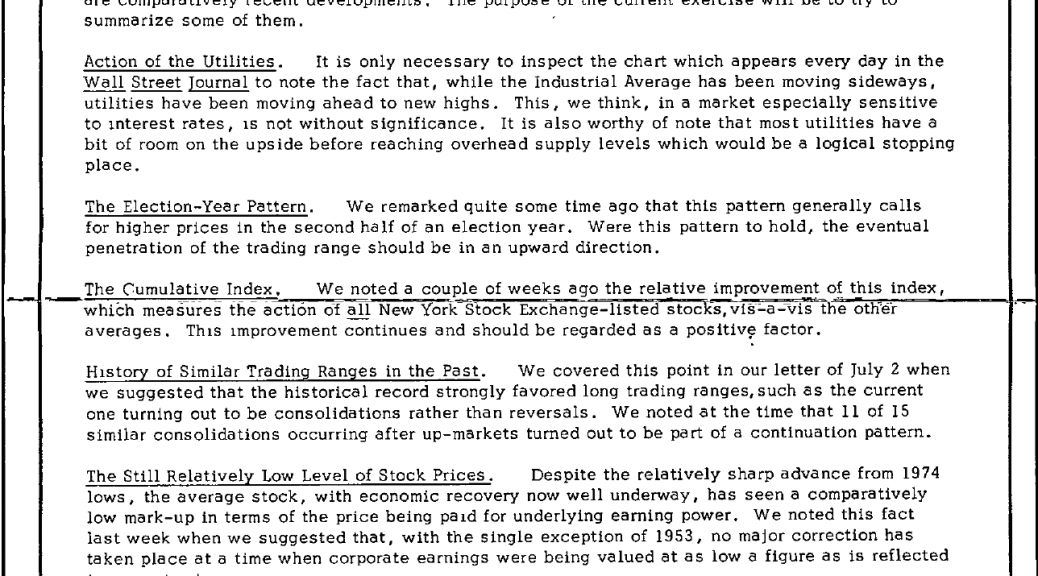 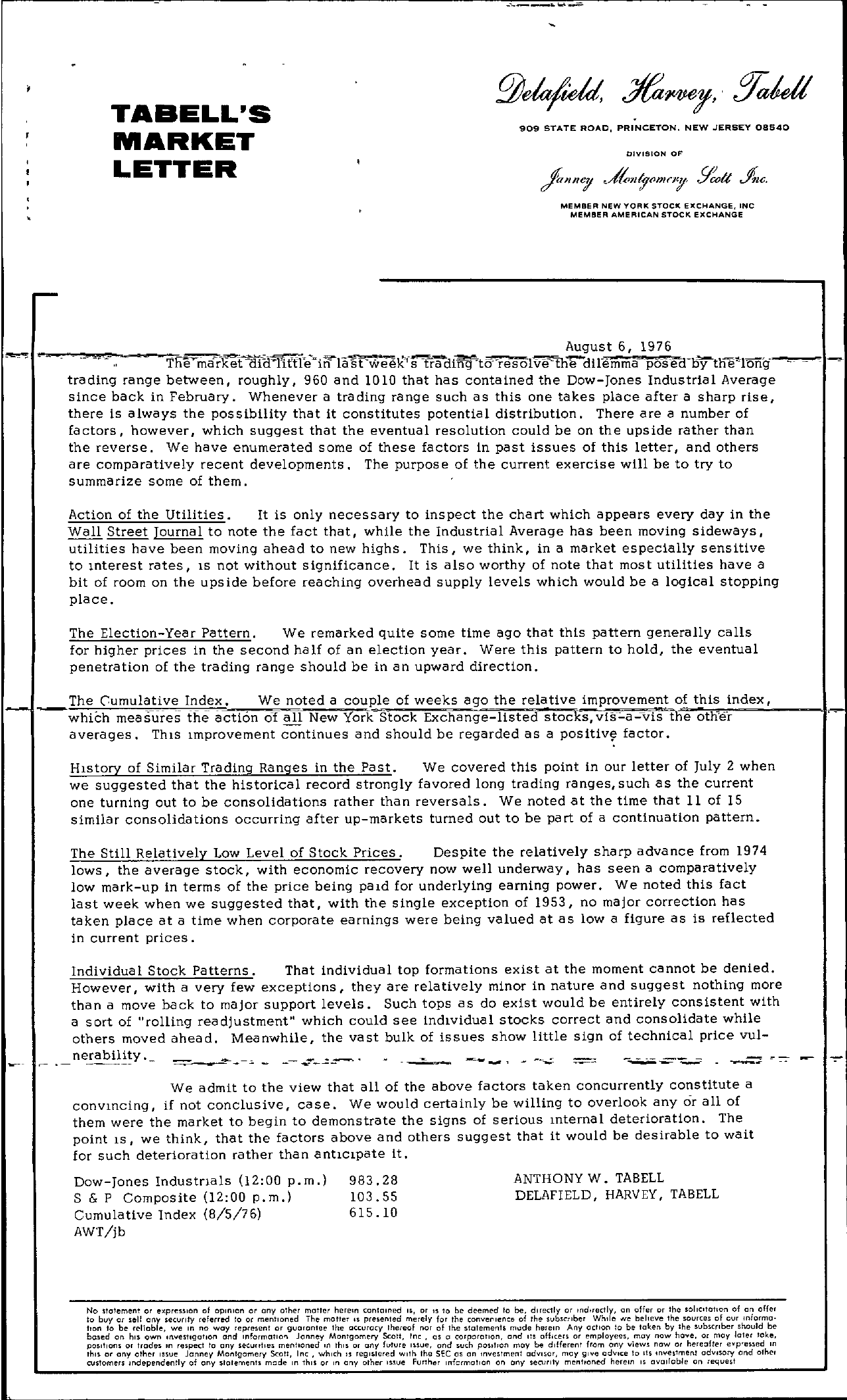 TABELL'S MARKET LETTER 909 STATE ROAC, PRINCETON. NEW JERSEY 08640 DIYISION OF MEMBER NEW YORK STOCK EXCHANGE, INC MEMBER AMERICAN STOCK EXCHANGE August 6, 1976 —''''-''''–''',,—;T'h- e' m,(rJet ''ch'a-nffle.itrial t'w e e KS'trading -to- re s 01v,,–'Th1;di reinmapose(rbythelong-'—I trading range between, roughly, 960 and 1010 that has contained the Dow-Tones Industrial Average since back in February. Whenever a trading range such as this one takes place after a sharp rise, there is always the possibility that it constitutes potential distribution. There are a number of factors, however, which suggest that the eventual resolution could be on the upside rather than the reverse. We have enumerated some of these factors in past issues of this letter, and others are comparatively recent developments. The purpose of the current exercise will be to try to summarize some of them. Action of the Utilities. It is only necessary to inspect the chart which appears every day in the Wall Street Tournai to note the fact that, while the Industrial Average has been moving sideways, utilities have been moving ahead to new highs. This, we think, in a market especially sensitive to mterest rates, IS not without significance. It is also worthy of note that most utilities have a bit of room on the upside before reaching overhead supply levels which would be a logical stopping place. The Election-Year Pattern. We remarked quite some time ago that this pattern generally calls for higher prices in the second half of an election year. Were this pattern to hold, the eventual penetration of the trading range should be in an upward direction. 1- The Gumulative -which measures Index. We noted a the action of all New couple of weeks ago the relative improvement of this index, York Stock Exchange-listed stocks, vHf'-a-vis tne oUi',,-r averages. Th,s Improvement continues and should be regarded as a positiv(' factor. HIstOry of Similar Trading Ranges in the Past. We covered this point in our letter of Tuly 2 when we suggested that the historical record strongly favored long trading ranges, such as the current one turning out to be consolidations rather than reversals. We noted at the time that 11 of 15 similar consolidations occurring after up-markets turned out to be part of a continuation pattern. The Still Relatively Low Level of Stock Prices. Despite the relatively sharp advance from 1974 lows, the average stock, with economic recovery now well underway, has seen a comparatively low mark-up in terms of the price being paId for underlying earning power. We noted this fact last week when we suggested that, with the single exception of 1953, no major correction has taken place at a time when corporate earnings were being valued at as Iowa figure as is reflected in current prices. Individual Stock Patterns. That individual top formations exist at the moment cannot be denied. However, with a very few exceptions, they are relatively minor in nature and suggest nothing more than a move back to major support levels. Such tops as do exist would be entirely consistent with a sort of rolling readjustment which could see indIvidual stocks correct and consolidate while others moved ahead. Meanwhile, the vast bulk of issues show little sign of technical price vul- — – – –. — – -'—– – – — – — — – We admit to the view that all of the above factors taken concurrently constitute a conVincing, if not conclUSive, case. We would certainly be willing to overlook any or all of them were the market to begin to demonstrate the signs of serious Internal deterioration. The point IS, we think, that the factors above and others suggest that it would be desirable to wait for such deterioration rather than antICIpate it. Dow-Tones IndustrIals (1200 p.m.) S & P Composite (1200 p.m.) Cumulative Index (8/5/76) AWT/jb 983.28 103.55 615.10 ANTHONY W. TABELL DELAFIELD, HARVEY, TAB ELL No statement or expression of opinion or anv olher motter herem contOlned 15, or IS 10 be deemed to be, directly or ,ndlfectly, on offer or the SOllcllollon of on offer to bvy or sell any security referred to or mentioned The motter IS presented merely for the convellenCf! of the subSCriber Whlle.,e believe the sources of our mformatIon to be fellable, we In no way represent or guoronlee the accuracy thereof nor of the statements mude herein Any action to be tai(en by the subscriber should be based on hl own Investigation and Informatlo'l Janney Montgomery Scott, Inc, as a corporation, and lIS offICers or employees, may now have, or may later toke, positions or trades In respect to any securl!les mentioned In thiS or any future luue, and slIch posItion may be different from any views now or here;lfter evp'!!ssed In thiS Of any other Issue Janney Montgomery Scali, Inc, which ' registered With the SEC as an Investment adVisor, may g,ve adVice to Its mvestment adVISOry and othel customers mdependently of any statements mode In thiS or In any other Issue Further Infcrmotlon on any security mentioned herein IS available on request